An Interview with Utah blues band of Urban Bleu: You can play blues until the day you die and you will never be out of style.

"Blues is more about escaping your problems and making something positive out of something negative than it is about feeling sorry for yourself."

Front-Man Aaron Robbie Fowler takes the lead with his soulful vocals, guitar, and harmonica. Django Lachlan's skill and power behind his bass guitar are unmatched, along with his harmonizing vocals. 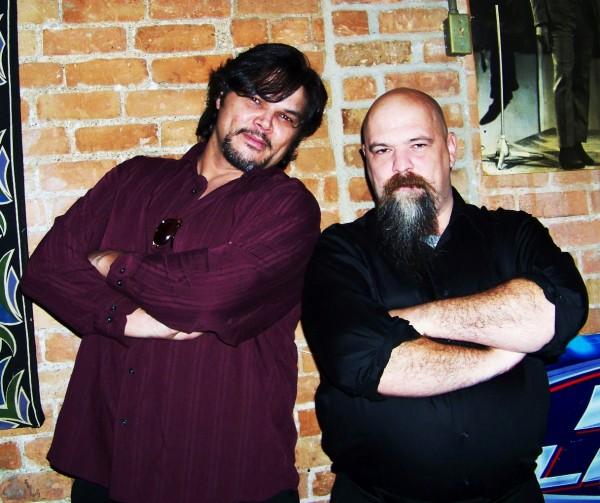 Aaron Robbie Fowler and Django Lachlan have jammed together for eight years. With a wide range of technique and a broad musical knowledge, they consistently produces fresh, dance-able music. Audiences love their blues roots, fused with rock, jazz, soul, and even a bit of country, with a more progressive sound unique to Urban Bleu.They write and play their music to cater to a wide range of listeners, their performances are always heartfelt and powerful. Their gigs have taken them to several cities within their home state, Utah. Urban Bleu's goal is to open their doors to the world through technology and playing live shows initially in the West and Southwest, United States. Urban Bleu is ambitiously embarking on a unique and global distribution of the best their music has to offer. Urban Bleu's plan is to take the airwaves by storm!

When was your first desire to become involved in the blues & who were your first idols?
Aaron: I was 10 years old when my Dad called me in to the living room and asked me to watch this band, Stevie Ray Vaughan and Double Trouble playing on this television show called Austin City Limits, I was amazed by SRV and I didn’t even play the guitar yet. I would have to say Stevie’s music lit the blues fire in me. My first Idols were Stevie Ray Vaughan, Jimi Hendrix, and Billy Gibbons.
Django: Blues just kind of fell into my lap, I was looking for a band and answered an ad Aaron posted in the newspaper. I really wasn’t sure what I was going to be doing, but when we started playing; I knew this was what I wanted to do. 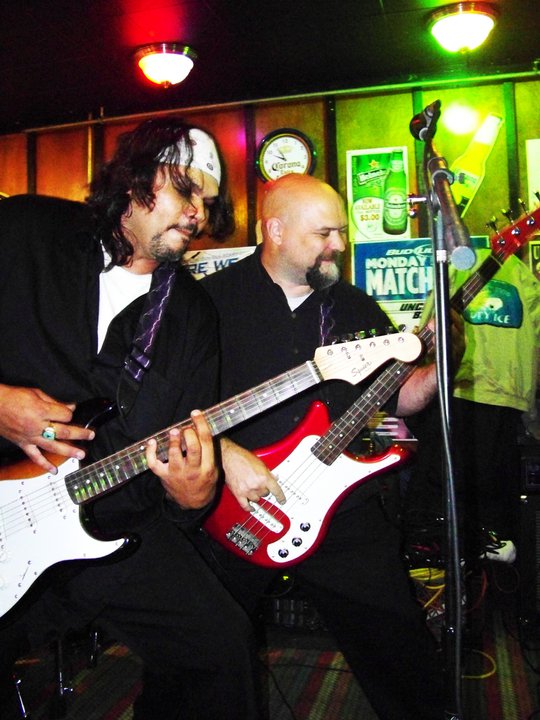 What was the first gig you ever went to & what were the first songs you learned?
Aaron: My first gig was a talent show at my high school, I played guitar for a hard rock band called Without Warning. The first songs I learned were Dirty Water by The Standells, Louie Louie by The Kingsman,  and Iron Man by Black Sabbath.
Django: The first gig I ever played was with a metal band when I was 17, we played original music. The first song I ever learned was Black Diamond by Kiss. That’s a long journey to playing blues now, but an interesting one.

Which was the best moment of your career and which was the worst?
Aaron: There have been a lot of great moments, but the best moment so far would have to be playing The Blues and Brews Festival in Rock Springs, WY. The worst was when I got so drunk that I nearly fell off of a stage in a biker bar called Angelo’s.
Django: I don’t think I can really identify a best or worst moment yet, there is still so much ahead of me.

Tell me about the beginning of Urban Bleu. How did you get together and where did it start?
Aaron: Urban Bleu was evolved from a previous blues band that Django and I formed in 2003 called “Robbie and the Bluetones” and we had to change the name because we found out that  Robbie and the Bluetones was already taken in 2007. And I met Django from an ad I ran in the local newspaper.

What characterizes the sound of Urban Bleu? How did you choose the name?
Aaron: Blues has always been the foundation of our music  but we throw many other genre’s in to the mix to keep an edge.  Urban Bleu was the feel of our music. I kinda floated down to us. 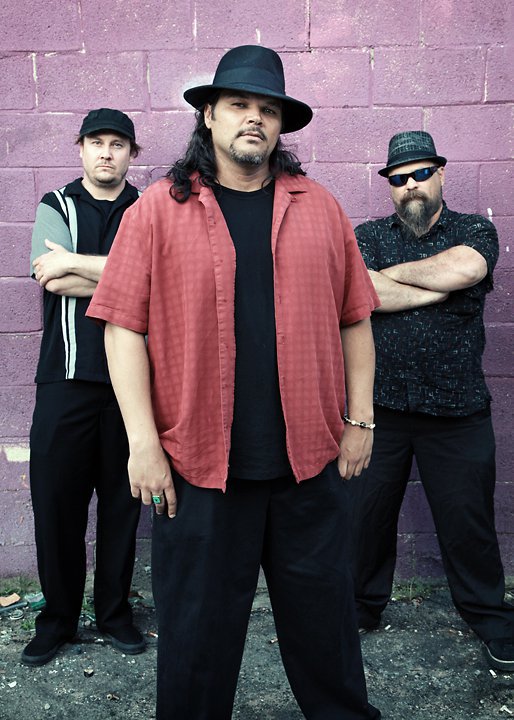 Do you have any amusing tales to tell of your gigs with the band? How do you describe your partners?
Aaron: Oh we have had a few women take their shirts off and drunks trying to sing with us on stage. Dan and Django are amazing player’s and without them Urban Bleu wouldn’t be.
Django: Probably the most amusing tales I could tell about Urban Bleu would be about the band itself.  As far as how I would describe the people in and around the band: One big happy dysfunctional family. That pretty much sums it up.

What are you thinking when you guys are on stage?
Aaron: I still have a bit of stage fright so I really try to get inside of the song I am playing and live there, it’s the only place that I feel strong.
Django: Sometimes I still can’t believe I get paid to do this!

Any of blues standards have any real personal feelings for you & what are some of your favorite?
Aaron: I have always liked “Hoothie Cootchie Man” by Muddy Waters and “Born Under a Bad Sign” by Albert King is another great blues tune, we cover that one.  I would love to do Urban Bleu’s version of Hootchie Cootchie Man. Pride & Joy is probably my favorite all time blues song.
Django: We play mostly original songs, but my favorite covers we do have to be “Born under a bad sign” (Albert King) and “Little School Girl”

What does the BLUES mean to you & what does Blues offered you?
Aaron: The Blues is my life. It is the best place for me to shine.
Django: Blues is more about escaping your problems and making something positive out of something negative than it is about feeling sorry for yourself. It has given me the opportunity to do that. 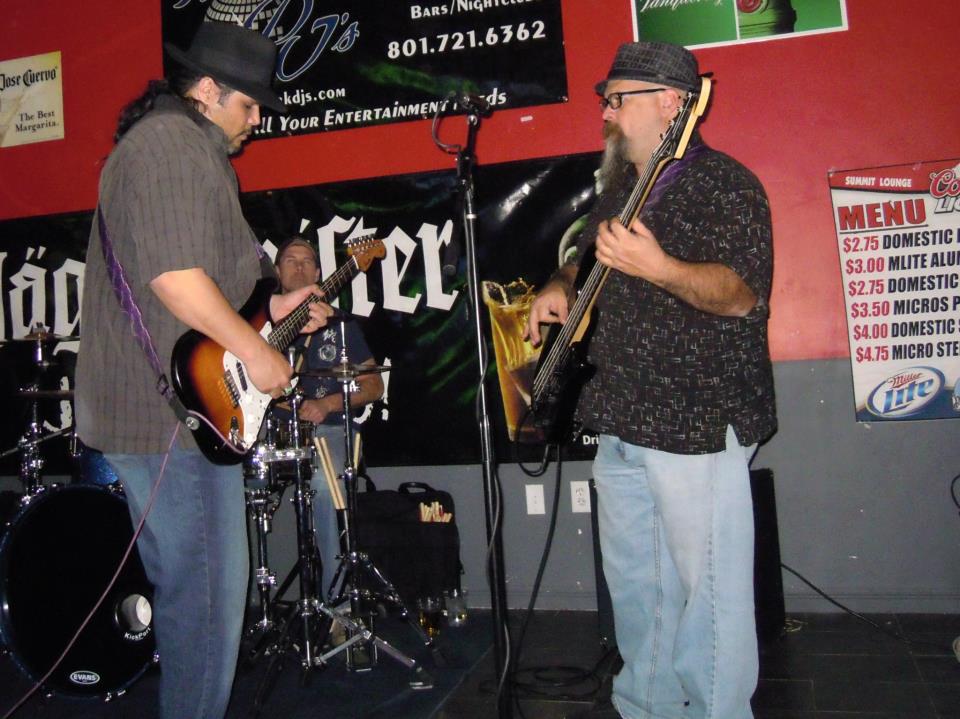 Which of historical blues personalities would you like to meet?
Aaron: I would love to meet B.B. King.
Django: BB King without a doubt, he made blues “cool”.

From whom have you have learned the most secrets about blues music?
Aaron: My Dad showed me how to play the blues but I have picked up tricks of the trade by listening to and watching Stevie Ray Vaughan and Jimi Hendrix.
Django: I think a lot of my Blues influence has come from playing it in this band, we decided to play what we feel and break some rules, that’s how it all got started, so we’re just keeping it real.

Who are your favorite blues artists, both old and new? What was the last record you bought?
Aaron: I love Albert King, Muddy Waters, and Stevie Ray Vaughan as far as old school; recently it’s been Jonny Lang, Los Lonely Boys, and John Mayer.  I think the last album I bought was a Rolling Stones album, I don’t remember which one. 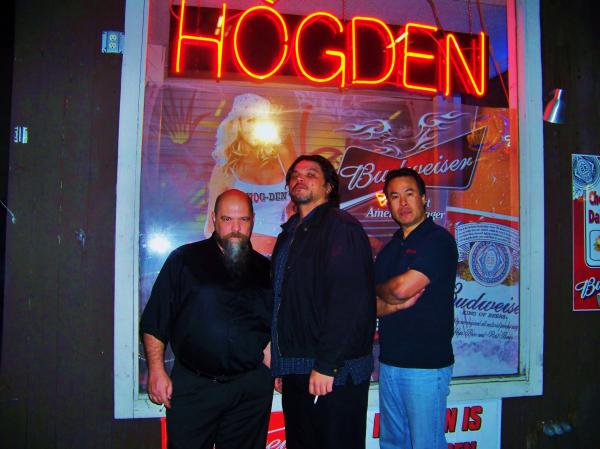 Some music styles can be fads but the blues is always with us.  Why do think that is?Give one wish for the BLUES
Aaron: Blues will always be around because it is the root of all popular music. I wish that blues would become mainstream again.
Django: New sounds and effects come and go. Sometimes people want to feel all sparkly and bright orange, but people will always want to forget their problems, people will always want to be entertained by live musicians who have been where they are and felt what they are feeling. Blues will live on forever.

What would you had given to ZZ Top? What would you ask BB King?
Aaron: I would give ZZ Top a copy of  Urban Bleu’s new album “Public Enemy #1” and I would ask B.B. King to show me a lick or two.

Do you think that only real blues is something gloomy, played by old grey-haired men with harps and battered guitars in some smokey, dark and little shabby clubs?
Aaron: No, not at all, I write blues songs to lift people up. Blues is for everyone, young and old. That’s the beauty of it. You can play blues until the day you die and you will never be out of style. 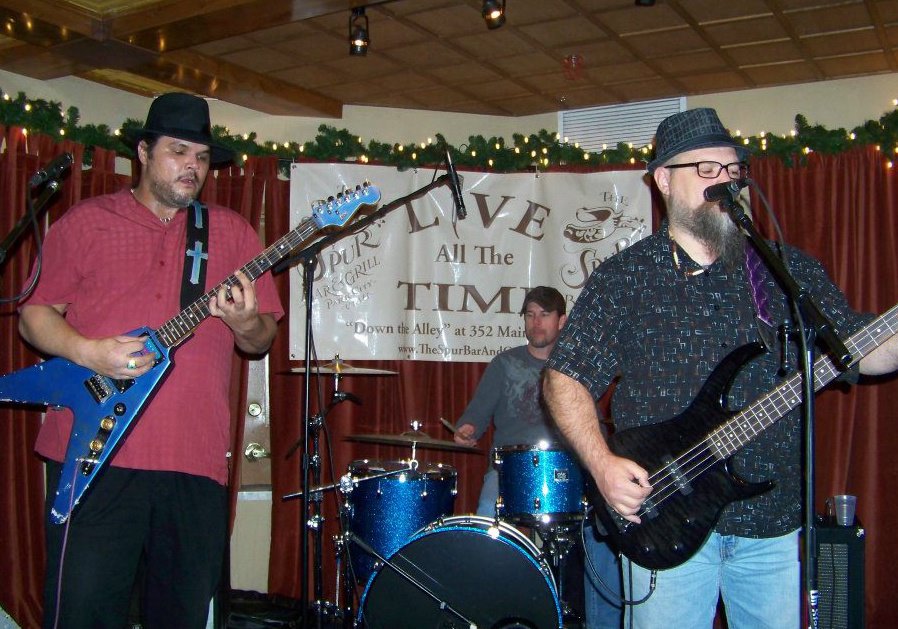 What would you had given to Stanley Clarke? What would you ask the Who?
Django: Stanley Clarke has been a major influence on me. If I met him, I might just stand there and look stupid for a minute and then say something like “you’re cool”. Then walk away thinking of all the things I should have said.
What would I ask The Who? Something like…. “How do you keep doing that?”

Has it always been all about the blues? Or is there any other types of music, you could say you have been strongly affected by?
Aaron: It took me a few years of playing hard rock like Poison and Motley Crue before I realized that Blues was my calling.