An Interview with visual artist Chris Kruse: Artworks that celebrates the human experience of all cultures

"What I found attractive in the Blues, in general, was the realness. No fluff, no safety nets, pure passion."

Chris Kruse is a visual folk artist and his original artwork are paintings on wood, portraits of blues, jazz, country, and rock n roll artists, athletes, sports legends, movie stars, and soulful pictures. Chris has been making art for as long as he can remember. Growing up in the 70's, he was introduced to Led Zeppelin, Marshall Tucker Band, The Eagles, and many others through from his older brother. Chris’ mother had old 45’s of Elvis, The Beatles, Chuck Berry, and many others. Growing up in North Texas, sports were also a big part of his youth. Over the years, he found self-searching deeper and deeper for the roots of rock n roll. Traveling the Blues highway (61) to Clarksdale, MS inspired him to find his visual voice. Meeting other artists and hearing the honesty and conviction in the music compelled him to begin making art out of love and respect for the people and places that shape us.

Chris has currently taking that passion to new places in his work. Having friends all over the world, he hears stories of the people and places that inspire them. As an artist, he wants make artwork that is a reflection of a world that celebrates the human experience across all cultures.

Chris and his wife Ghislaine - a textile artist making custom rugs, backpacks, felted jewelry, and much more - share a home studio in the hill country of Fischer, TX.

Chris, when was your first desire to become involved in the painting and art?

Well, I started drawing when I was a child. I remember taping pieces of paper together and drawing aliens & superheroes to scale. I knew at a young age that I would be involved in visual arts in some way. It wasn’t until my wife (then girlfriend) took a trip down the Blues highway 61 that I found my direction.

What first attracted you to the Blues & how has the blues and jazz music changed your life? I’ve always been a music lover; growing up in the 70’s - I pretty much listened to anything that was on the radio. When I heard Stevie Ray Vaughan for the first time; I went to the pawn shop and bought a cheap knock-off Strat and decided that I was going to learn to play.

In college, I was a sponge when it came to music. I ended up in a couple of punk bands over the years. There was something very therapeutic about getting your thoughts across in a short and simple way. I would listen to Muddy Waters and Robert Johnson but I didn’t truly understand the significance of Delta Blues until years later.

What I found attractive in the Blues, in general, was the realness. No fluff, no safety nets, pure passion. This led me to dig deeper for lesser known Blues artists like: Charlie Patton, Skip James, Blind Willie Johnson, Son House, etc.

What characterize the philosophy of your work & progress, how do you describe your philosophy about the ART?

My process starts with finding wood and cutting it to size. I make screens for printing with pantyhose. It’s sort of a mixture of Warhol’s industrial approach and Finsters hands-on human touch.

What are some of the most memorable drawing you've had?

The first painting of Son House stands out; and John Lee Hooker because they look so different from what my style has evolved into.

I learn something new every time I listen to Willie Dixon, Son House, Muddy Waters, RL Burnside, and all of the other greats.

What does the Art and Blues music offered you?

The Blues music has inspired me and my aim in creating the art is to preserve and pay tribute to the musicians that have formed this great music genre. I can’t say I’ve had a really low point. When you got the Blues, you’re not the only one.

When I’m working on a particular artist; I usually listen to their music. It’s my own weird way of trying to connect with them.

Would you mind telling me your most vivid memory from Honeyboy Edwards?

Meeting Honeyboy Edwards and having the chance to sit down and talk to him was really special. I gave him a portrait and he was very gracious and proud. Definite highlight.

I saw a photo of Pinetop Perkins with your portrait, have you ever meet Pinetop?

Unfortunately, I never got the chance to meet with Pinetop before he passed.

Who from THE MUSICIANS you have drew, had the easiest pure original attributes for your painting?

The two that stand out are Robert Johnson and Muddy Waters. I also love to draw Son House. They all have very distinct faces.

I’m very spontaneous; sometimes I get inspiration just from hearing a song or even in dreams.

Which is your favorite portrait? In which drawing can someone see the best of your love to blues? I really love painting people and It’s my hope that people will see that. If I had to choose I would say T-Model Ford or Robert Johnson. I love the history and the stories that people have and my aim is to share that with others.

Which memory during of Blues highway (61) to Clarksdale, MS makes you smile?

Driving down 61 for the first time and listening to all the great Delta Bluesmen on the way. Hearing the music and seeing the landscape It felt like I was traveling back in time.

Who of the musicians were the most “gifted” on brush and colors?

John Lee Hooker, Muddy Waters, and Robert Johnson flow the easiest. They have such interesting and distinct faces that it makes for great art.

And who were the most “difficult”?

The most difficult would have to be BB King or Willie Dixon... I can’t really put a finger on why.

Hearing stories about Charlie Patton and Son House; I love to have witnessed their car trip out of the Delta to record.

I would have loved to meet Johnny Shines, Robert Johnson and Howlin’ Wolf as well. In present day, Tom Waits and Keith Richards would be a blast.

I’m gonna steal a quote from Willie Dixon because I think this really sums it up, “Blues are the roots, the rest are the fruits.”

I have a feeling Robert Johnson would try to slip out of town when my back was turned. He was always on the move but I sure would’ve loved to learn about his guitar tunings and ask him about his talk with the Devil.

What would you say to Tom Waits?

I love how Tom Waits approaches the creative process. He’s such a great storyteller so I’d probably ask him for a story. 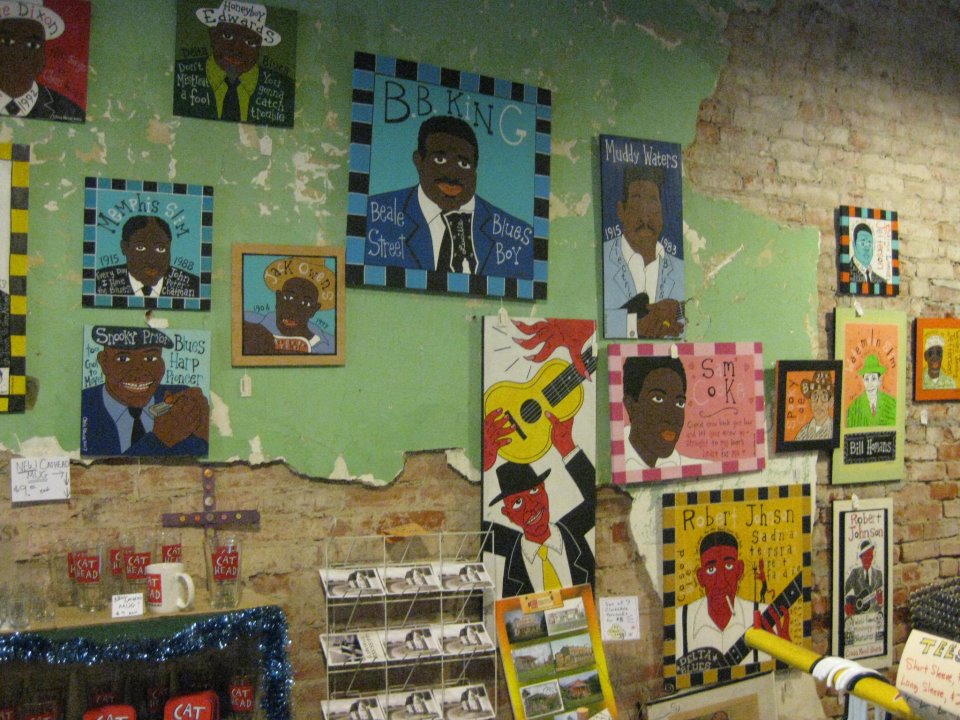