An Interview with visual artist David Lynch, a Memphis-based painter who feels the heart & soul of city

"Everything about Memphis and the South are unique.  Every Person, every corner that you turn, Every door you walk in, Every taste that you put in your mouth...It is SPECIAL!"

David Lynch is a celebrated Memphis-based artist who feels the heart & soul of this great city in every brushstroke of paint applied. Drawing at an early age, it spiraled over the years from one art course to another leading to the University of Memphis Fine Arts department. This was the launching pad into a career in art and becoming a professional painter.

From that time on he continued his passion to create a different style unique to his own personality and inspirations. “I think as an artist it is important to pull from all of your influences in life and two of my main ones are Music and Travel. Being from Memphis, it was inevitable that this city’s soul & rhythm course thru my veins and influence my Art. Along with music, As I travel thru different countries I immerse myself in their culture, incorporating aspects in each new painting in hopes of adding a touch of international flavor.” 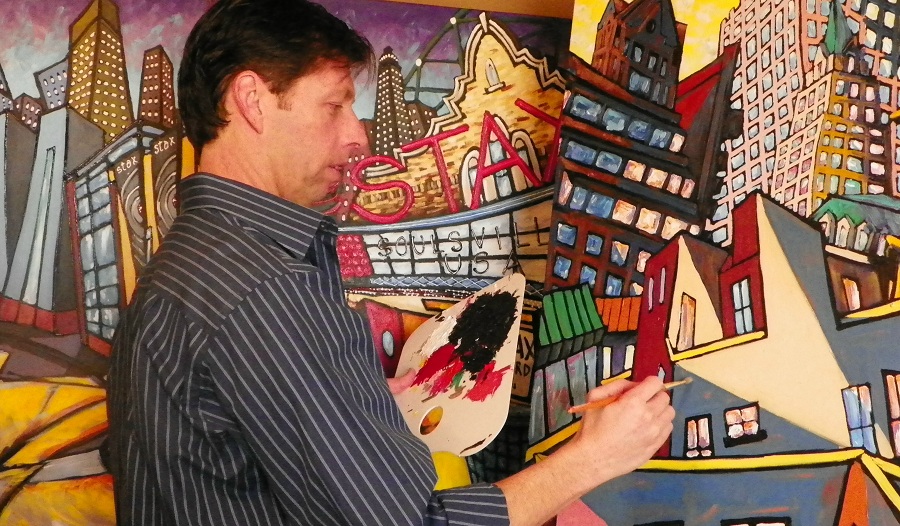 That leads to asking how does all of that apply itself to the paint on canvas: “Each painting begins with a composition of a scene which has a certain flow and rhythm so that your eye travels across it while at the same time a mixture of vivid colors convey a sense of mood. Maybe it’s a certain time of day or it could be the expression on a face. I want to create pieces that skew the usual everyday scenery and that are bold and energetic.”

© All images and artwork are property of David Lynch

David, when was your first desire to become involved in the painting? How did you did it start?

Actually, I cannot remember a time in my life when I haven’t drawn or painted something…  My earlier drawings were taking different photos and LP album covers of musicians and combining them into a piece in the way that movie posters used to be.  That probably says a lot of why I still use reference photos and combine different angles of my subjects to create my paintings.

What does Art mean to you and what does offer you?

Art means a multitude of things to me.  I allow my imagination to free up and to take the straight- line world and twist and turn it into any shape or form that I would like.  From the initial layout and once I start to add color, it is an exploration of colors and a release of thoughts. 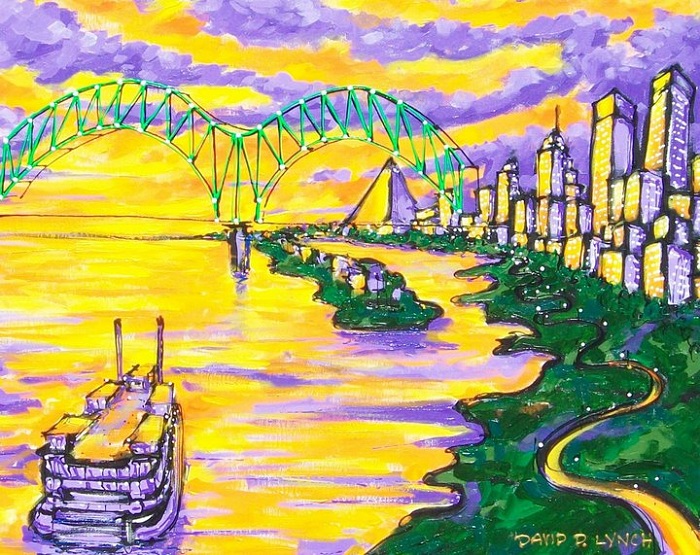 "Memphis has tried over the years to incorporate new identities to it, but for some reason, the BLUES keep coming back."

What do you learn about yourself from the colors and blues music?

Colors to me are very much MOOD and FEELING, the same that Blues music is based on.  I always have music on when I paint & don’t think that I could do it without music.

What characterize the philosophy of your art and how do you describe David Lynch’s art?

The philosophy of my art is pretty self-serving….. I just Love to paint.  I love being out & around, then something catches my eye and it is like a light switch clicking on in my brain. Then I tell myself – man that would look cool as a painting.  Luckily, people also love my art and it has allowed me to make a living at it over the years.

As for descriptions, I’ve tried a few times to come up with a ‘snappy’ title for the way my art appears and each time that I do, I feel stupid doing it.  Each painting that I do is a culmination of what I have been exposed to all my life and each is also a trying phase of something new, so to ‘name it’ would format me into that ‘certain’ look and not allow me to constantly explore new ones.

What are some of the most memorable drawings you've had?

I used to save all of the drawings that would later become paintings, but when I would go back and look at them, they really looked rough – especially compared to the finished paintings.  So I imagine most are stuck in a stack somewhere in a closet…… maybe one day I’ll revisit them.

From whom have you have learned the most secrets about the art and Memphis music and culture? 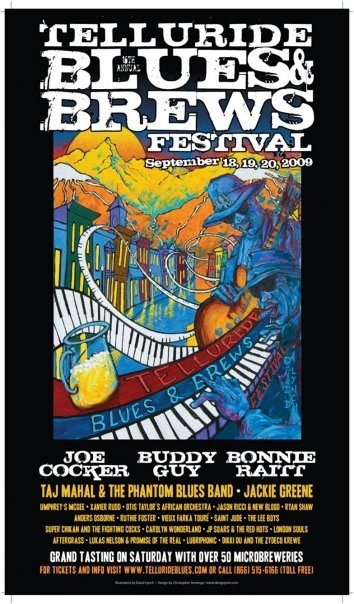 The majority of my influences in Art and especially Music are just by being out in the world and seeing something special, hearing a new song, or walking into a Juke Joint and seeing new musicians.  Nothing can beat a live performance and being so close that you can see all the intricacies and feel the rhythm in your soul.

The best I would have to say is the current day….. almost All of my works now are commissioned pieces and I love the fact that people love my style so much that they invest in a work and I get to meet each and everyone of them.  It is great to work with and for art lovers – they are some of the most appreciative people in the world.

The worst would have to be the early days of building a career.  Struggling sucks!

How does the music and culture of Memphis come out of your art?

I don’t think that you can pinpoint it… Maybe it is in the water. It’s like when I hear a band play and I can almost certainly pick out the one that has been schooled and the one that grew up listening and playing it. The music definitely has a certain vibe to it and I think that is how my art work is.

I’ll float around the dial (Sirius radio) and choose between Blues, Jazz, & Jimmy Buffett – anything it takes to get the juices flowing that day.

Just last week I was cataloging my works for a client and could not believe how many pieces that I have done over the years and how across the board they were.  Each painting has it own memory from conception, painting, marketing it, selling it, and the clients that have invested in them… so each painting has a life of its own…. And just looking over all of them made me think of each in that way.  What a long and interesting road it has been.

I would love to paint B.B. King in a way that no one has captured.  I’ve had this thought in the back of my mind for a year and just haven’t put pencil to paper yet….

Are there any memories from local Blues and Jazz festivals which you’d like to share with us? 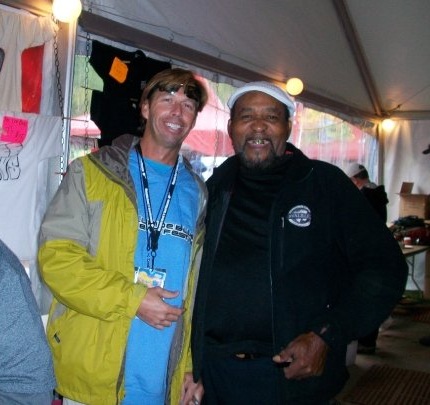 I’ve pretty much seen most of the famous musicians perform in my life – in one way or another – but a few years ago I did the poster for the Telluride Blues and Brew Fest and was backstage with Joe Cocker, Bonnie Raitt, and had the pleasure to meet James "Super Chikan" Johnson – what a talent!

I love to travel, so my dream would be to experience and paint different countries and people.

What first attracted you to Blues culture and how has changed your life?

Whether one will believe it or not, the BLUES are a part of everyone of us.  Maybe some don’t recognize it but the blues have become hits by OR strongly influenced bands like the Beatles, Led Zeppelin, Stevie Ray Vaughn, etc… not to mention all of the Al Green, Sam & Dave, BB King songs that have been recorded, which are songs that we hear everyday and are so great, but we don’t know why.  It because the BLUES hits you in the soul and heart.

Some music styles can be fads but Memphis music is always with us. Why do think that is?

There is something in the air and water in Memphis that produces such soulful and rhythmic songs, much like Zydeco in Louisiana.  It is just something about it that cannot be duplicated anywhere else.

Do you know why Memphis is connected to the Blues culture?

I don’t know the actual history, but Memphis has tried over the years to incorporate new identities to it, but for some reason, the BLUES keep coming back.  Now it seems a great relationship is occurring between what is current and the foundation is the Blues.  Much like a new city block with a historic building in the middle that cannot be torn down. "There is something in the air and water in Memphis that produces such soulful and rhythmic songs, much like Zydeco in Louisiana."

Which memory from Beale Street makes you smile?

I’m on Beale Street at least once a week for one reason or another; amazingly I always see something new…. Sometimes that is a bad thing.

What characterize the sound, faces, smells and colors of Memphis?

Everything about Memphis and the South are unique.  Every Person, every corner that you turn, Every door you walk in, Every taste that you put in your mouth…. It is SPECIAL! And lets you know that you are in Memphis.

Of course!  There are always ‘old cats’ handing down to ‘new cats’.  Just as with the past generations.  Some things will change a bit as this generation will add its own spin on ‘the blues’, but the blues will always live.

What is the “feeling” you miss most nowadays from the old days of Memphis?

If anything…. Maybe just the LACK of popularity and commercialization.  In my youth, it used to be great to sneak into a Juke joint, underage- but get a few beers, and catch a great blues band that didn’t play for 30 minutes then break for 45 min.  Those bands used to play until the sun came up and we would be right there with them…. Now those are harder and harder to find.

Why did you think that Sun Records continued to generate such a devoted following? A couple of months ago I heard a few songs off of a new Chris Isaak album, of which I haven’t really heard much of his music, but it had a certain ‘rawness’ to it, then after it was over the DJ explained that it was recorded at Sun Studios.  With auto tune and home recording machines and every digital music instrument that you can think of being used nowadays, I think that people really enjoy a musician being a musician and Sun Studios seems to capture that rawness of music.