An Interview with guitarist/singer Ana Popovic: Blues is Unconditional. Maybe the most CONSERVATIVE style of all

"This is how I see  the blues: the beauty of less, "don't make it too tidy" kind a thing.. beauty of the basics and an instrument."

Ana's career has been meteoric, and shows no signs of slowing down! The most impressive aspect of Ana's music is her diversity of techniques and styles. Her blend of smoking electric funk slide guitar, jazzy instrumentals, tight blues groove, soulful feminine vocals and her incredible stage presence makes her an irresistible force in the music world. Ana’s father first introduced her to the blues, through an extensive record collection and sessions hosted at the family home. Popovic founded her first serious band at age nineteen. Within a year, she was playing outside of her home county Serbia and opening shows for American blues icons like Junior Wells. Her band Hush releases the album 'Hometown' (1998). The next year, Popovic relocates to Amsterdam, to study Jazz & World guitar at the Conservatory. In 2000 Ana forms the 'Ana Popovic Band' that quickly becomes a fixture on the Dutch blues scene and soon ventured into neighboring Germany. Ana signs with German based 'Ruf Records' and records 3 albums; 'Hush!' (2001), 'Comfort to the Soul' (2003) and 'ANA!' (2005: live CD & DVD). In 2003 Ana Popovic is nominated for a W.C. Handy Awart in the United States.

When I was about 15 I started playing guitar and I learned: Dust My Broom (Elmore James), I'll Play the Blues for you (Albert King), Statesboro Blues (Allman Brothers Band) among others.. I simply learned them from the records

Blues is UNCONDITIONAL. Maybe the most CONSERVATIVE style of all. if you play with it, it will no longer be blues. You can only be blues if you respect the rules. And vulnerable as it is it stands the time. This is how I see  the blues: the beauty of less, "don't make it too tidy" kind a thing.. beauty of the basics and an instrument.

The best was playing in front of 10.000 people on the Russian River Fest in California with Buddy Guy and his band, while BB King was watching the show from the stage. 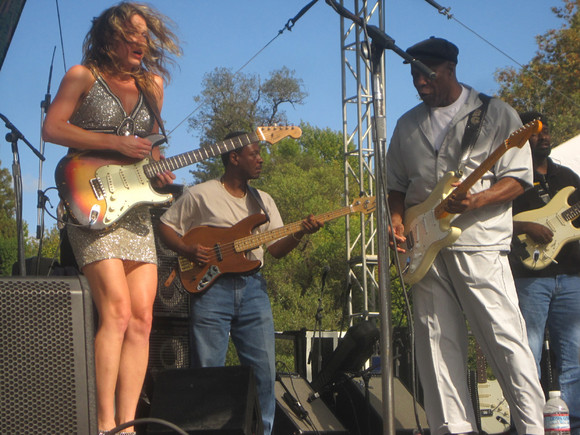 Opportunity to jam with people that most inspired me in my life: Sonny Landreth, Buddy Guy, Ronny Earl, opportunity to travel the world and live good from my passion: music

Difficult question but, which artists have you worked with & which of the people you have worked with do you consider the best?

Buddy Guy, Sonny Landreth, Ronny Earl, Solomon Burke, Water Trout, Bernard Allison, and many more. Hard to tell who's the best, everyone have his own style, it's hard to compare them. That's why I don't have a favorite artist, I like all shades of Blues: from Robert Johnson to Robben Ford..

From the musical point of view is there any difference between European Blues Scene & US?

European musicians in blues are mostly afraid to explore what is truly unique in them selves, they are often copying, and want to sound exactly like Stevie Ray Vaughan, and exactly like Jimmy Vaughn, or Jimi Hendrix. I would suggest to them to keep writing their own songs, even if they are not completely blues; better original then a copy of 'Sweet home Chicago' for the millionth time. And find your own sound as a guitar player instead of complying players that are no longer there.

Do you think the European younger generations are interested in the blues?

Some are. You can't force it. If a kid likes it, it simply comes naturally. Someone simply has a ear for it. We are always playing for a mixed audiences. We're playing music based on blues but our show is energetic, and attracts young audiences to, just because of the arrangements and stage presence.

What do you learn about yourself from music & how would you describe your contact to people when you are on stage, what does MUSIC mean to you?

People often ask me to describe what I feel on stage.They ask: ' where are you when you close your eyes on stage, it's like you're not even there". Well, that place were I am is simply UNCONDITIONAL. it is MAGICAL. it is just me and my guitar, me and my band, notes, sounds, drum grooves, I let the band lift me up, and I feed of of their energy. I am pretty sure everyone can feel that in any job they are doing, that is if you're doing it with love and passion. And if you're experienced enough to dare to let yourself go and be yourself. No boundaries, no outside prejudice, just YOU and your TALENT. And ones you find it - you find yourself. And that place takes no pretending, or posing, it's only there if you're true, and it's simply UNCONDITIONAL.

I HATE TO THINK when playing. I ONLY FEEL.

UNCONDITIONAL is how I stand towards my music -it's mine, it's sacred, and it's with no boundaries. Absolute, definite, I tend to put everything I have into it and don't let anything or anyone get in-between me and my music. Except the people that truly inspire me. 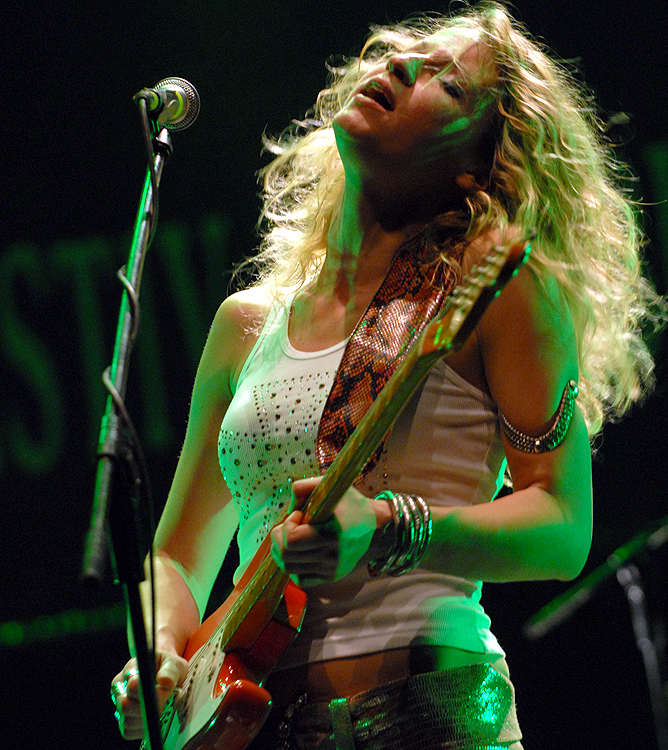 All the periods are equally interesting: when you're discovering the passion behind something, when you dare to go after it for the first time, when you're becoming better at something, and when you're enjoying the moment where you are .. the point to never stop investing in yourself and in your talent, never stop wanting more, and to simply ENJOY THE RIDE.

Is there anything that you miss from your childhood times?

Ones someone told me that:  "after hearing Ana Popovic we all want to go back home, leave our jobs, and become guitar players"...

Where did you pick up your slide style & what would you use for a slide?

I learned it myself, from the records, I always played regular tuning, but I've learned from records of:  Sonny Landreth, Elmore James, Roy Rodgers, Duane Allman, Robert Johnson,

How was your recording hours with David Z?

David was open for new influences and wanted to try new things, he's fabulous for some funk influenced stuff.. On every record there are some songs that I am very proud at, but the latest CD ' UNCONDITIONAL' i actually listen to a lot, and am very proud of.. It came as close as to what I was hearing in my head before we started recording.

Three words to describe your sound & progress? In which song can someone hear the best of your guitar work?

You have traveling all around the world (Mexico, Indonesia etc). What are your conclusions?

People live different lives and live very hard, too. It strikes me to see how people living in the third world countries are not capable to change their lives, although there must be very good gifted guitar players everywhere, they are determed by where they are born, and for them it's so hard to change their destiny and fulfill their dreams..

Opening up for Junior Wells in Belgrade when I was 19 years old; Being special guest on Solomon Burke tour, being invited by Buddy Guy and Sonny Landreth, and opening shows for BB King

To globally come back to music with real values and real messages... 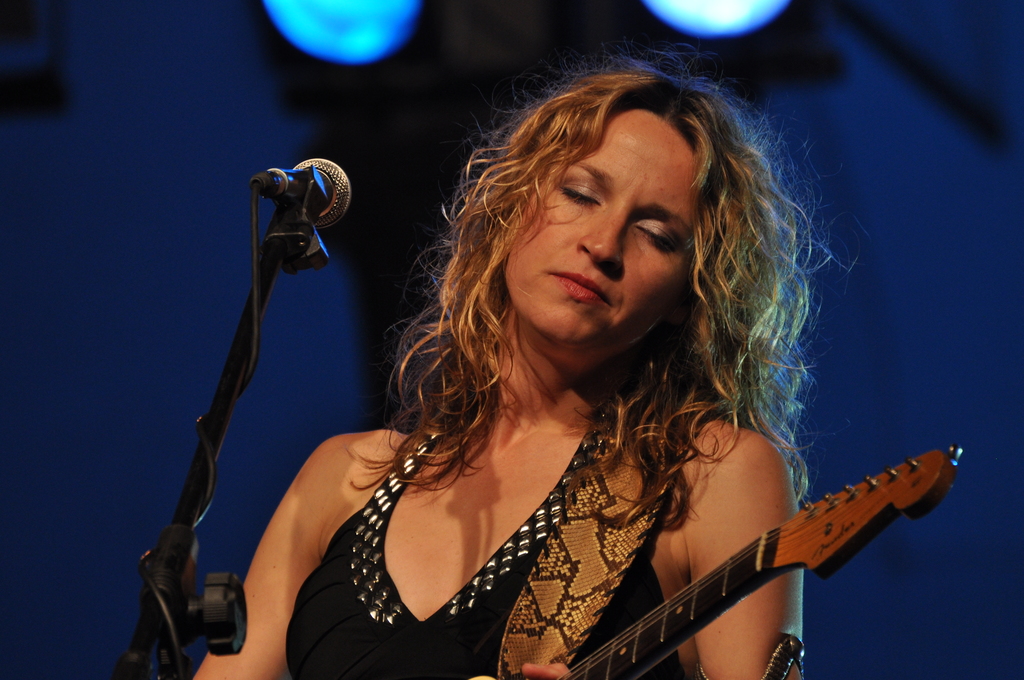 Very important, it's your trademark, it's what you represent, it's where you inspire people, Not only visual appearance  but your state of mind, your music and message that you carry-  -- that's what's gonna  make you different than the rest.

What your opinion about reality like “America’s have talent”, “pop idols” etc?

I hate TV anyway, and those kind of music shows are far, far from real music.

'Navajo Moon', 'Fearless Blues', 'Shadow after dark', 'Unconditional', and others..

Many: CD's like: 'Still making history', 'Blind for Love' and 'Unconditional' are all personal records that carry strong messages and are full of inspiring songs about living under Milosevic regime, about love, friendships, politics, people in 3rd world countries,  about blues, passion..etc..

Everywhere, and at any time. I record the melodies and lyrics in my IPHONE and that happens while I'm walking in the park, or shopping in the supermarket, or lying in the sauna.. simply everywhere.

Bringing out a new 'Unplugged CD" Recording a follow-up for studio cd 'Unconditional' , working on songwritting,  guitar playing and singing. And touring, naturally, as many countries as possible. 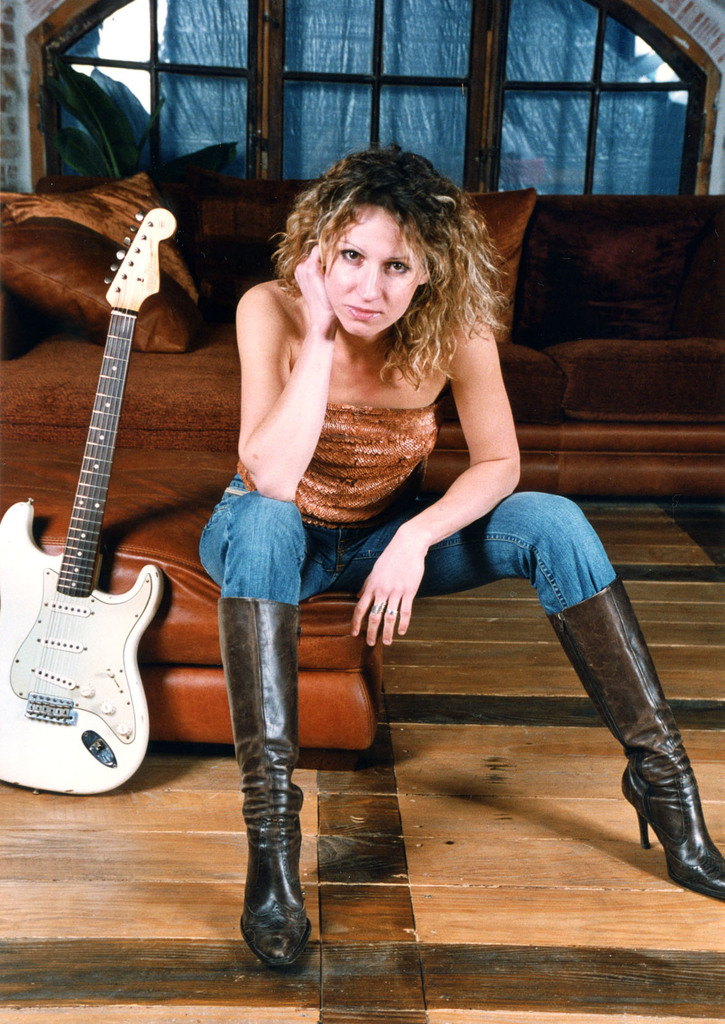