"I think, the blues are the same all over the world...of course, comes from the States, but the blues are about THE feeling, and like Willie Dixon once said: blues is the facts of life, about people and their stories."

Ximena Monzón is a harmonica player and singer from Buenos Aires, Argentina. She began taking her first harmonica lessons in mid-2006, with Paul Brotzman and Adrián Jiménez. In 2009 Gabriel Gratzer (Director of the School of Blues) invites her to participate in assemblies of School Blues (Collegium Musicum) directed by Mauro Diana and Gabriel Cabiaglia. Made ​​her first appearance in concert as guest to Gabriel Gratzer and Adrian Jimenez. Ximena was part of the group "The Hoochie Coochie Girls". In 2010, he appeared on "Blowing the Blues" organized by "Blues en Movimiento" along with Huguis López and Mariano Slaimen. Additionally, she was part of the band "Queen Bees Blues Band". 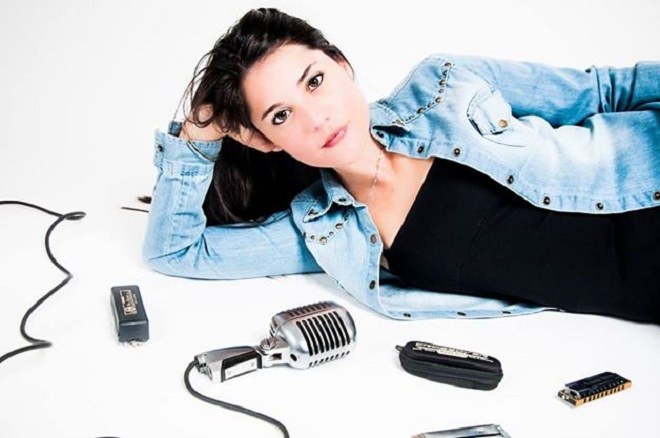 Since 2011, Ximena is a member of "Angels and Devils - Harmonicas" project. In 2013, she appeared in "Blowing the Blues" by "Blues en Movimiento" with Adrian and Cesar Jimenez Valdomir. Currently, working on her solo project, along with James Esposito/Verteramo Federico on guitar, Mauro Bonamico on bass and Rodrigo Benbassat on drums. Also, she’s member of Rhythm & Blues band "Sol Cabrera & Big Brothers".

I learned to always go to the roots... all are there. Always I go back to it. I mean the learning of folk music (not from my country), so this situation, takes time and maturation.

How do you describe Ximena Monzon sound and what characterize your music philosophy?

I’m always on a quest. I love harp's tone and the improvisation in this genre ... and the blues has plenty of that.
My musical philosophy is to study all the records of the great masters of the Blues. It's a wonderful genre full in history, feeling, happiness, sadness, passion is very strong, good music never ceased to exist with high and low but never die. That's why always we'll have blues lovers around the world.

In addition to taking classes  particular, I had the opportunity to participate in school assemblies of blues and I see more and more women interested in either gender instrumentalists and vocalists, bands with female members form as myself, are very focused on what I do trying to make my place.

I wish more places/venue to play with decent arrangements, where the artist is valued.

I remember a show especially in Buenos Aires with Lurrie Bell - who went to see several times, for me a living legend - that night I saw him close up. This was very moving and exciting moment. Also a show of Billy Branch in Buenos Aires, invited all the harp players to jamming ...Mr. Branch, offered me his mic, when my turn came...no cons always, to be a woman in the blues (laughs). I would like to go Chicago 1973 to watch the recording of Big Walter Horton with Carey Bell by Alligator label and give a big hug to Walter Horton ...and I'll converse about the great legacy he left us. For a good measure I'll greet the great Carey Bell whom he recorded as the 2nd harp and of course ...Eddie Taylor.

It was very important for me that had the chance to study in The Blues School and get to meet the directors, and I still learning each day. They also gives me the chance to participate in the gigs they pull out; actually I recorded one of their cds with other harmonica player.
The record is produced by Blues in Movement, an organization which make blues activities.

Traditional music seems to be fashion often, in the 90’s it was a period in which a lot of blues musicians came to Argentina. Some years ago it emerges again with a lot of enthusiasm, a lot of musicians play for these artists that come from the States. 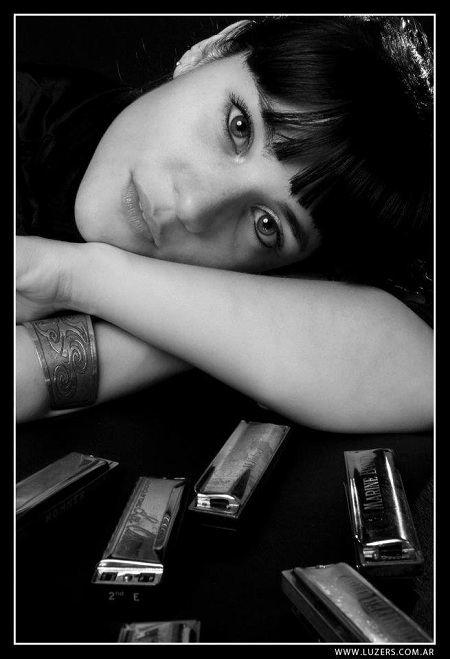 In Argentina the blues scene is very influenced by the old school sound and the old school fashion of blues artists. You can find and see all the young generations, that are attracted by this kind of blues.

I think, the blues are the same all over the world...of course, comes from the States, but the blues are about THE feeling, and like Willie Dixon once said: blues is the facts of life, about people and their stories.

What I miss the most is that all the great blues legends are gone, those were the guys that really knew how to play the blues, traditional blues, there are still some good ones around but most of them are gone.

My hopes!! That blues keep on growin on for much more years, and be more massive and known around the world - I hope it won’t degenerate much more from now on, hahaha!!!