"Musical genres are regenerating which is good as retro seems to be coming back again, yet music is becoming more and more disposable as life moves into a faster rhythm."

Aussie bluesman Hat Fitz and Irish-born folksinger Cara Robinson are a striking pair. Hat Fitz is a “veteran” wild man of the blues scene in Australia. He has a record 18 straight appearances at Byron’s East Coast Blues and Roots Festival, a record that is not likely to ever be broken, and one which bears testimony to his amazing live performances and popularity with festival goers.

Cara draws on her soul background (she’s toured Europe and the United States with singers such as Jamiroquai and the hugely popular Corrine Bailey-Rae), and although blessed with a sensational voice she was not content to be labelled as ‘just a singer’. She has taken to drumming duties as well as washboards, flute and tin whistle, sometimes all at once. 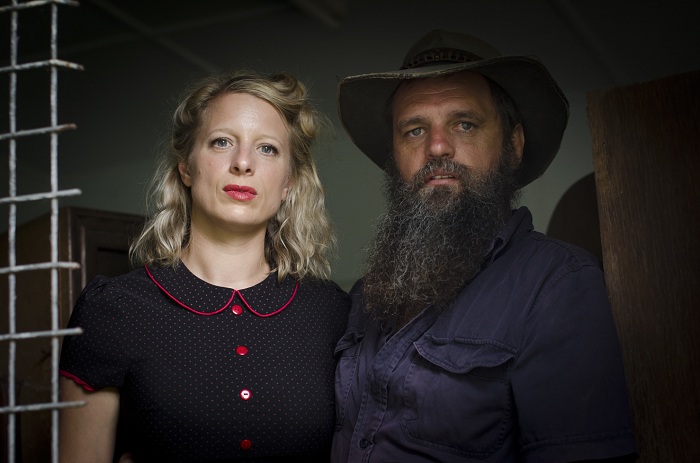 Both artists have vast experience behind them and have been able to gently influence each other without taking control. The variety of this recording is refreshing and the excitement comes from a sense that this is just the start of what is destined to be a large brood of musical offspring.

The blending of pre-war hill country and delta blues with early Australian folk and traditional Celtic styles has produced a truly unique sound and has enhanced their reputation as one of the world’s most interesting and musically appealing combinations. Hat Fitz and Cara released their new album “DO TELL” on Manhaton Records.

Cara: Learning from the blues music has taught me that you cannot hide behind the music with what you feel inside. You have to climb inside it and let it take you there, basically expression is the key. The blues music means a lot to me, I remember the first time I heard one of my teachers in school sing Led Belly to our class and as we were singing the call and response that Led Belly is so well known for I felt this overwhelming feeling in the pit of my stomach and I got the bug of music from then.

How do you describe and what characterize the philosophy and sound of Hat Fitz & Cara?

Hat Fitz: Our sound comes from the instruments that we play which are mostly Vintage caliber dating back as far as 1920's although it is very hard sometimes to travel safely with the 1920' Ludwig kick drum as you are always nervous about it being taken apart.

Hopefully our sound comes from an honest place where we both can express ourselves fully with the influences from our backgrounds in Blues, Folk and Soul. 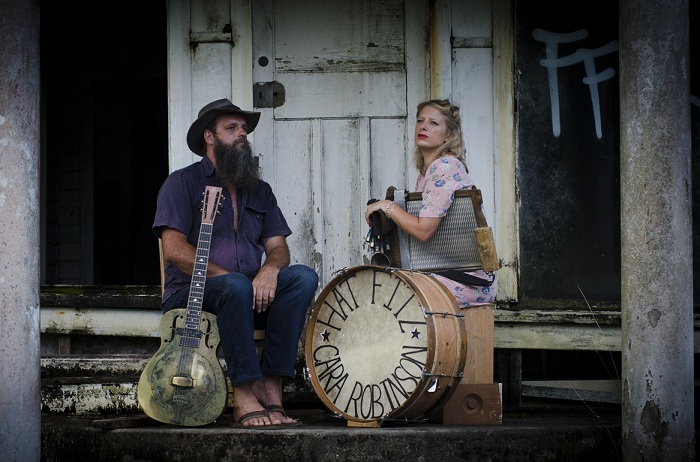 Hat Fitz: The experiences that have influenced us in our songwriting come from immediate personal life happenings and some from long ago for instants the Song "Do Tell" which is the title track of the album is the personal connection of Fitzy and his portable fridge that he took everywhere I guess you could say it was like a pet that had a constant flow of beer available? But yes on a more serious note there are deeper songs that have touched our soul that have came from more relevant experiences such as near death experiences that help you to reevaluate life, this is apparent in the song "Gotta Love"

Why did you think that the Blues & Roots music continues to generate such a devoted following?

Hat Fitz: This music has always come from deep roots as far back as the early 1900's, where music was passed on through travelling folk, who kept their stories of real life hard ship by passing them on around the world. This is still happening today in a different medium but the sentiment is still there that is writing and singing from a real place of deep emotion whether it be happy or sad.

Cara: People are still after real live music and there is no way that you can get a blues backing track to demonstrate what is real and authentic in Blues music.

Thank goodness I say as you can't beat the sound of a live band with the rhythm section inside the groove leaving the rest of the players to let rip over the top, that's when you feel the floor shake and the roof lift off. Who would not follow this?

Playing at the Byron Bay Bluesfest in Australia and East Coast Music awards in Canada recently was a real high buzz.

Cara: Best Jam I ever played in was when Jeff Lang asked me up on stage to play with him, Danny McKenna on drums and Grant Cummerford on Bass at the Bridgetown Blues festival. Loved playing the Woodford Folk festival Australia and opening up for Jools Holland at the Southwell Folk festival in UK. 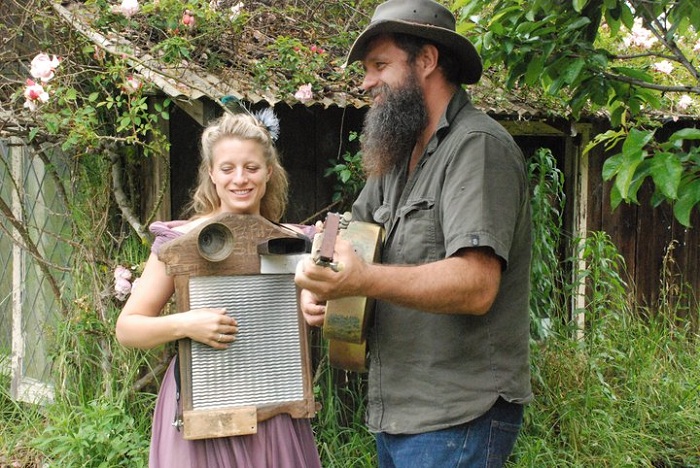 "The Australian blues music has a more hill country, rootsy mongrel vibe to it whereas the European seems to have more of a Chicago influence amongst it which is also great too."

Cara: This was over 10 years ago yet the memories are still very strong, I do remember there being so many mad stories which I would love to share but let’s just say what’s on the road sometimes stays on the road ha ha ha. JK was a real cockney Geezer and was a party animal for sure and still managed on stage to perform the most energetic shows that blew all his audiences away.

Corinne is an amazing friend who has been there through thick and thin. It was a real honour to have shared the stage with her when we were in "Women On Top" There were times when I could not look at her for laughing as we had a wild sense of knowing the other ones harmonies without even having to practice yet my dance moves would crack her up as I would always get the wrong step going so would mostly knock her flying. She is an inspiring and talented musician who can move a room full of thousands of people just with her voice.

From the musical point of view what are the differences between Australian, European and American scene?

Hat Fitz: Australia has its own style of Blues music as does the European and American one also. The Australian blues music has a more hill country, rootsy mongrel vibe to it whereas the European seems to have more of a Chicago influence amongst it which is also great too.

The American influence all depends where you are as it changes within each different state. You have your Chicago, New Orleans deep south and so on. 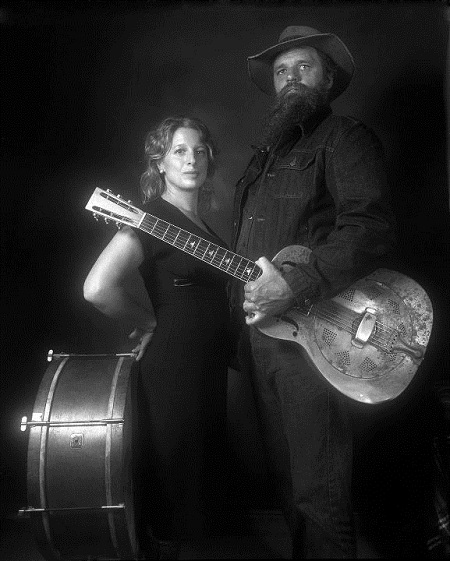 Hat Fitz: The Beards from Melbourne playing at the Blues fest in Byron Australia were hilarious as all they sing about with so much passion and heart is their beards. They asked Fitzy to get up on stage and play one solo while they all touched his beard at the same time I know how much he hates this ha ha ha.

What touched emotionally was hearing Candy Cain Soul singer from Canada in a seedy soul and Blues bar where she shook and shaked the room with awesome presence.

Cara: I'm sorry but I have to say what made me laugh most was the day Fitzy caught his beard in the Drill and danced around like an oversized leprechaun shouting profanities for several hours until he calmed down. Sorry Fitzy!

What moved me emotionally was the moment Aaron Neville got up on stage with the Blind Boys of Alabama and sang Sam Cooks version "Change is gonna come" that was one of those moments when everything stops and all you hear is the music.

Hat Fitz: That most of it rarely comes on record anymore and that everything is so over produced I don't mean music should sound like it's played in a garage but that it’s so over produced that it sounds sometimes like it has lost its feel and soul.

Cara: That the music scene will become even more digital than it is now losing its magic of live musicianship. Musical genres are regenerating which is good as retro seems to be coming back again, yet music is becoming more and more disposable as life moves into a faster rhythm.

Hat Fitz: That live music was more accessible to everybody, being rich, poor, young and old and in the country areas where there are too many gambling machines and sports TV bars as the new generation is becoming less aware of the real live music scene.

Cara: I would add at least several more privately owned music venues in each town or city and would like to build a support network that would keep them in business for a long time.

We have too many impersonal franchise set ups where there is no atmosphere in the venues. 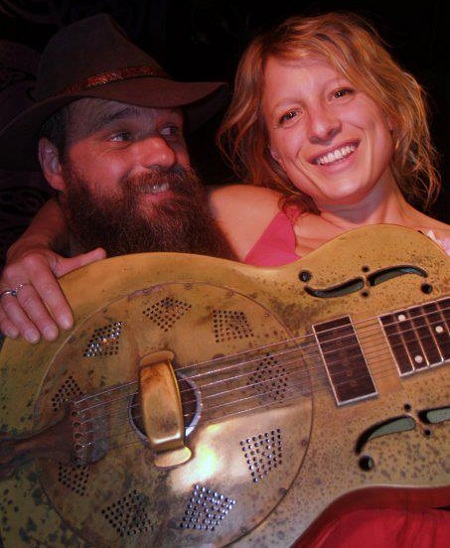 Hat Fitz: Would like to go back to the deep Mississippi back when there were the porch players and they told their story through music.

Cara: Well in a time machine I would travel to Nina Simone playing live at Greenwich Village hall in the 1960's then at lunch I would travel to the 1950's when Donny Hathaway and Gill Scott Heron were playing America and for night time I would head back to the 1940's to see Freddie McDowell at one of his clubs that would blow my mind.