"Acid Pop Rock is a modern term. It came from a lack of a better term. Fusion is a closer description of the times…but that term didn’t exist either. Progressive was more a kin to what we were thinking."

George Bunnell was born in Lawrence, Mass. He is bass player for the 1960s psychedelic rock group of Strawberry Alarm Clock. The band occupies a peculiar niche in the history of '60s rock. Their name is as well known to anyone who lived through the late-'60s psychedelic era as that of almost any group one would care to mention, mostly out of its sheer, silly trippiness as a name and their one major hit, "Incense and Peppermints," which today is virtually the tonal equivalent of a Summer of Love flashback. But there was a real group there, with members who had played for a long time on the Southern California band scene, who were proficient on their instruments and who sang well and generated four whole LPs of which at least three were worth hearing more than once. 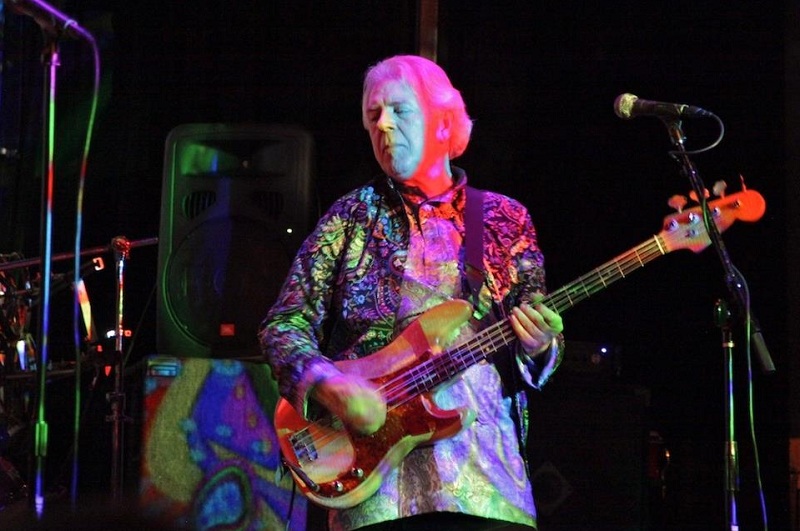 Photo by David Guilburt, taken The Whiskey A Go Go

The band's origins go back to Glendale, CA, in the mid-'60s, and a group then known as Thee Sixpence. Their lineup was formed from the members of various other bands coming together, and included Lee Freeman (vocals, guitar, and harmonica), Ed King (guitar), Gary Lovetro (bass), Gene Gunnels (drums), Mike Luciano (tambourine), and Steve Rabe (guitar).

Before recording their full-length debut album, the band added a second bass guitarist, George Bunnell, who was also an accomplished songwriter who's contributions enhanced a style that coupled hippie trappings with enchanting melodies and some imaginative instrumentation. In January 2010, Strawberry Alarm Clock began recording new material. That collection was released in 2012. Continuing today on as Strawberry Alarm Clock are Mark Weitz, Randy Seol, George Bunnell, Gene Gunnels and Howie Anderson.

George Bunnell talks about the 60s, Strawberry Alarm Clock, Beach Boys, Whiskey A Go Go and his experience on the road with the music.

When was your first desire to become involved in the music and what does Psychedelic culture offered you?

I was hearing big orchestrations in my head as a child….3 or 4 years old. I would let the grandiose arrangements fill my mind.

I think it was that sort of open mindedness that allowed me to explore musically later in life.

In the 60’s we didn’t label ourselves as Psychedelic. Back in those days the press just said we were a mix of rock, raga, classical and jazz….with lush harmonizing ala the Four Freshman and the Andrew Sisters.

But, being labeled as such has given us tremendous poetic license to go out on a musical limb. How do you describe George Bunnell sound and progress, what characterize Strawberry Alarm Clock philosophy?

I’ve never had to describe myself….let’s see….I know I’m creative…the ideas just keep coming and I try to act on them or they vanish. I like to play bass with a somewhat aggressive edge…I push the beat. I also like to hear beauty and color in the music and lyrics.

The Strawberry Alarm Clock is a democracy. We write together and apart. We can tell each other just about anything…and we try each other’s ideas. We allow the magic to happen. We let the music go where it will.

What experiences in your life have triggered your ideas most frequently for your songs and music?

I have usually written a song because it was something I wanted to hear. it could be the lyric or the chord changes or a riff or a bass part…some times a beat or just a melody.

I believe I get in a certain mood that will trigger an idea.

I guess I sometimes will hear something in a dream or catch something on TV or the radio. Other times it can be subliminal. 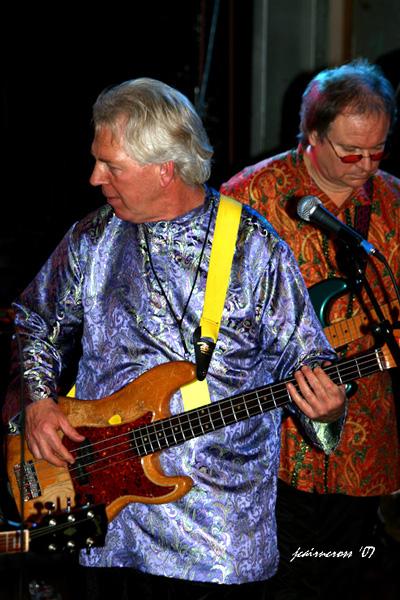 The most interesting period in my life was childhood. I had a great childhood!

The best moment has to be getting asked to join SAC back in 1967….I had just graduated from High School! But the real topper was when Mike Love of the Beach Boys walked into a SAC recording session and asked if we would go on two tours with them and Buffalo Springfield…the best thing that could have happened.

The worst time was when the SAC got busted in Peoria. We were framed but it ruined us. Then to make matters worse we found out our manager was ripping us off.

We had all agreed to fire him but at the last minute the band was divided. Two of us quit in dismay, Randy Seol and I.

It was a regretful decision but I think I would do the same today.

In your opinion what was the reasons that made West Coast to be the center of Music experiments?

On the west coast of California there is a climate of free spiritedness. The sun and the surf bring people out of their otherwise mundane existences.

There is a lot of music here. It’s in the streets it’s in the air. There is also an influence from the movie and television location shooting that goes on all around you….It’s an artistic environment.

Why did you think that the 60s music culture continues to generate such a devoted following?

Because of the free spirit and artistic openness it projects. It reaches people at their core.

Do you remember anything funny from the recording and show time Strawberry Alarm Clock?

Recently while on stage in San Diego, CA. our guitarist Howie Anderson had to run off the the stage as nature was calling…I had been facing in the opposite direction so when I turned back around….POOF he was gone….I had never experienced that one before….quite funny. 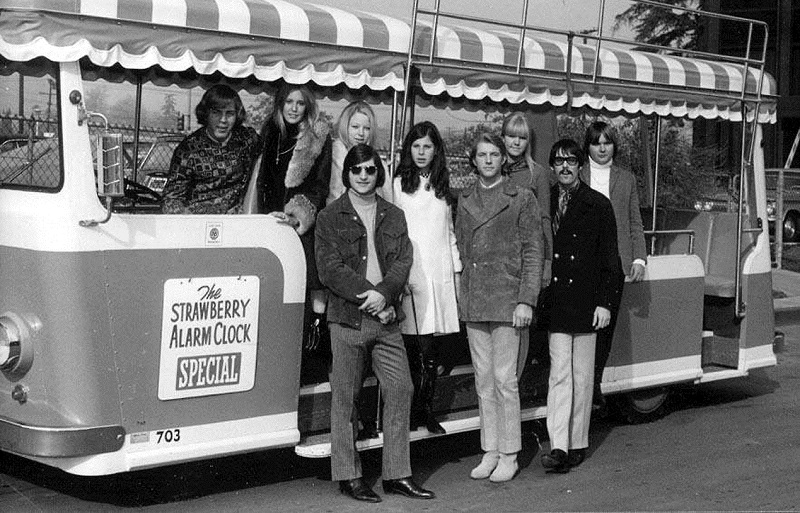 The first day we met the Beach Boys on tour:

We had to take a commercial flight to Texas where we met up the Beach Boys and The Buffalo Springfield. From there we would all fly on their private plane.

When we go to the sound check we walked into this big empty theater and sitting in the middle were the Buffalo Springfield. On stage were the Beach Boys.

Neil Young motioned for us to come down and sit beside them. He leaned over and said; “prepare to have your mind blown!”

Well, the BB’s did the intro to God Only Knows and Carl Wilson started to sing….The hair on my arms stood up…I was totally caught off guard …I had no idea they were as good as what my ears were telling me. I had my mind blown!

What do you miss most nowadays from the 60s Acid era? What characterized the philosophy of Acid Pop Rock?

Acid Pop Rock is a modern term. It came from a lack of a better term. Fusion is a closer description of the times…but that term didn’t exist either. Progressive was more a kin to what we were thinking.

You had pretty interesting photo with the band on Incense and Peppermints album. Where and how did get that idea?

That photo was taken by Ed Caraeff….he also took that iconic photo of Hendrix at Monterey POP with his guitar in flames.

It was taken in the shop that made us our clothes, Sat Purush. Those garments are called Kurtas. We had been looking for something different to wear on stage and when we happened upon that shop they outfitted us right there on the spot and our photographer was with us…he just kept snapping away saying it looked great. It did!

All the pillows and chairs and jewelry were part of the shop…we were window dressing! Why did you think that Strawberry Alarm Clock continued to generate such a devoted following?

Our fan base has constantly regenerated itself. It’s seemingly a perpetual age group. At our shows we see mostly a younger audience. We love that aspect of being “aging rockers”. Consequently it never gets old for us.

Another reason is that our music was never really pigeonholed into a specific genre. Incense and Peppermints seems to fit in with the changing landscape while at the same time painting a picture of a bygone era.

What are some of the most memorable tales from the famous West coast clubs Whiskey A Go Go and more?

The Whiskey is where Neil Young wrote Mr. Soul. He was watching Otis Redding on stage singing the Stones’ Satisfaction and got the idea for the riff in Mr. Soul….Mr Soul is Otis Redding….he used the same drum beat as Otis too.

The coolest jam has to be on the Beach Boys' tour when most of SAC and Buffalo Springfield got on stage with the Beach Boys and jammed on their finaly….all their classic surf hits….we also would jam at night after the shows in the Hotel rooms.

Memorable gigs include opening for the Who, the Doors, Hendrix, The Yardbirds, The Beach Boys, Buffalo Springfield, Jefferson Airplane, Moby Grape….too many to name 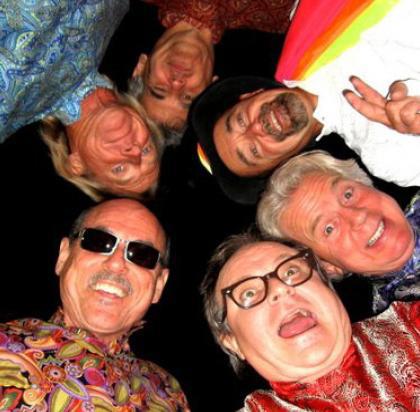 The most important for us was the Beach Boys.

From the musical point of view what are the differences between: Strawberry Alarm Clock with the others 60s bands?

We were not locked in to a particular genre. We had elements of all sorts of music. It came from us being younger than most of the bands at the time and we were still in discovery mode…experimenting.

What are the lines that connect the legacy of Blues n’ Roll with Beatles music and continue to psychedelic and beyond?

The Beatles are a mix of all that with a good dose of nostalgia thrown in. We tended to be a bit melancholy as well.

Our lead guitarist, Ed King went on to show that there were some serious blues underpinnings in our music through his later work with Lynyrd Skynyrd.

What are your hopes and fears for the future of music? What turns you on? Happiness is……

It's hard to have any fears for the future of music at this point...all the damage has been done! From disco to rap to death metal to boy bands...untimely deaths from excess to AIDS....basically anything negative that can happen to music and the music business has already taken place.

I think I'm numb to it all...jaded...dazed and confused!

What turns me on though is when I'm playing with my band...rehearsing, writing and arranging new music. We're in a circle...facing each other. We exchange our ideas freely...we love to re-work the songs and add new parts.

I guess that answers Happiness is...too.

Musically, happiness is when we finish a recording of something we've been working on and we listen back and it works.

Playing live is a different story...then it's out of our control...somewhat. The ultimate thing of course, would be if the room had a great sound, the sound guy was on the ball, the light show perfect and the band playing mistake free and singing in tune.....and the audience picking up on all that! 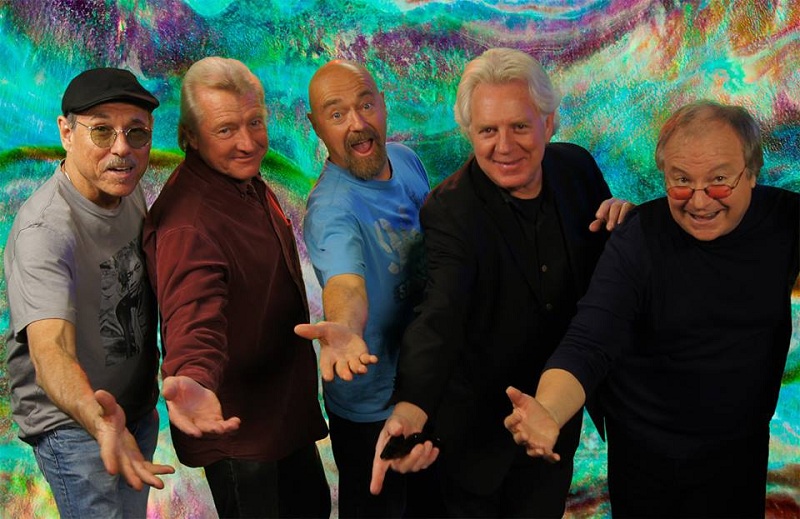