"Blues is a big part of American history and I hope it keep its natural roots. Today’s blues is becoming a lot more southern rock based and I think its loosing it natural flavor its history."

Son of jazz bassist Rayfield Britton, Reggie started his musical career as the premier Trio Drummer with The Black Knights, an award winning drum and bugle corps. His ever expanding talents lead him to St. Louis, where he spent three years as the drummer for The Natchez Cast on the Robert E. Lee riverboat. As part of their repertoire the cast performed a variety of dixieland standards and blues. After moving to Springfield, Reggie became the drummer of preference for such local acts as: The Joe Tenuto Band, Tash and Country Magic, and legendary Sun Records recording artist Eddie Snow, where he met Mr. Snow's guitarist, Harry Nino. Reggie Britton now fronts his own band Black Magic Johnson. 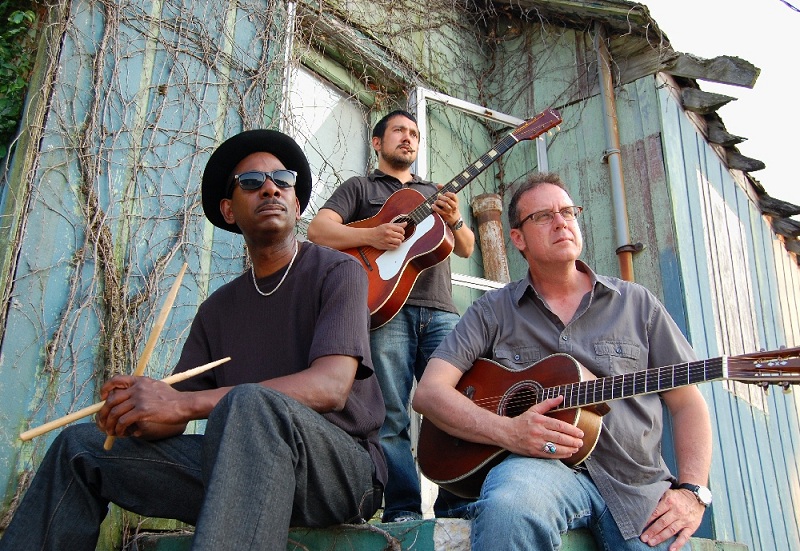 BMJ has been known for his fun collection of Southern Delta and Chicago new age blues. He may have been pumping originals and covers for only the past 15 years but he’s been playing the blues for over 25 years with some of the old greats like “Eddie Snow & the Snow Flakes, Oysters Rockefeller, Tom Irwin and many other music groups. The players in his band, Dan Grover, Alexis Rodgers, Robert Hagler and Willie Chrismon, bring over 50 years of experience to the table. Also BMJ has opened for some of the greatest blues acts around today such as Koko Taylor, David Dee, Lonnie Brooks and Ronnie Baker Brooks just to name a few. In 2004, 2005 and 2007 BMJ was nominated as one of the best blues act in central Illinois and performed at the Great Performers of Illinois concert at Chicago’s Millennium Park with Koko Taylor, David Dee and many more in 2006. In 2010 BMJ became the official blues band of the Springfield Milers Motorcycle Club and the most popular act among other Motorcycle Clubs and Blues Societies throughout Illinois and Iowa and other surrounding states. BMJ recorded their first CD titled "Food for Thought" in 2004 and October 2012 relesed the second album "Call Me" the tracklist contains 11 songs all penned primarily by Reggie, played by BMJ members with added sounds from various sources.

When I first started playing music playing blues wasn’t on my mind. Although my dad was a blues musician I use to watch him and my older brother and my uncle with some other cats play. My mind was on rock, funk, jazz, country and others not blues. It wasn’t till I got older that the blues became a big part of my music life. 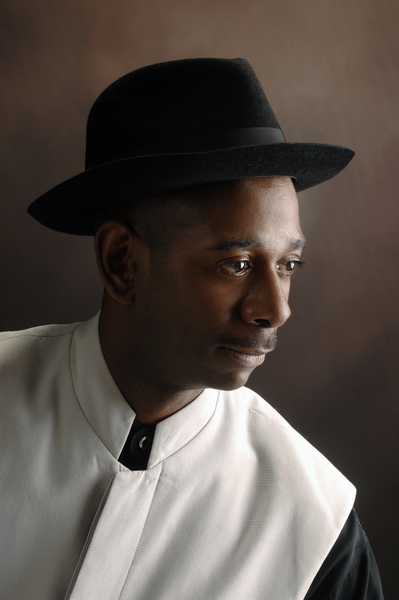 I would have to say Eddie Snow. I learned a lot playing with Eddie I also learned at lot form my dad and older brother Raymond who’s a guitar player, but what Eddie taught me stuck because I had to use it on gigs.

I’m not sure it’s been so long ago but I remember BB King at the Blue Note. I was too young to get in so I was snuck through the back door. My favorite first song was “she’s into to something” by Muddy Waters

History the struggle of a people in a life style that they were thrown into and the only way out was education, hard work that didn’t always help, but the blues was their  music a way to express them selves also a way out of that ghetto life style.  To quote Alexis Rodgers Blues is a natural fact, the raw emotion juice that flows through all American music. Blues today for me give me expression and a way out from the everyday bump and grind also something to leave behind.

How blessed I am. How I’m no different from anyone else. Well these days it keeps me somewhat busy & it has helped me to love life more and to count my blessings. I got a release in life & there are not a lot of people that have that.

How do you describe your sound and what characterize Black Magic Johnson’s sound?

I would have to say real. BMJ’s sound has change over the years, but our happy song style has remained the same.

Cool name Black Magic Johnson. How did you come up with it?

Well, when I played with Oysters Rockefeller. We played some Santana and Black Magic Woman was one of the songs we played. It was many years back I was playing a gig with some friends at a club in Springfield, IL. There were only about 10 people in the place. We took a break I went to the men’s room and while I was in there a young lady decided to come in and ask me questions about someone we both knew some friend of her knocked on the door and she pulled them in they all introduced themselves and started to conversant. A minute or 2 later the bar tender came in and said Hell Reggie you got more people in here than I got in hole dam bar what do you got a Black Magic Johnson and from then the name stuck. 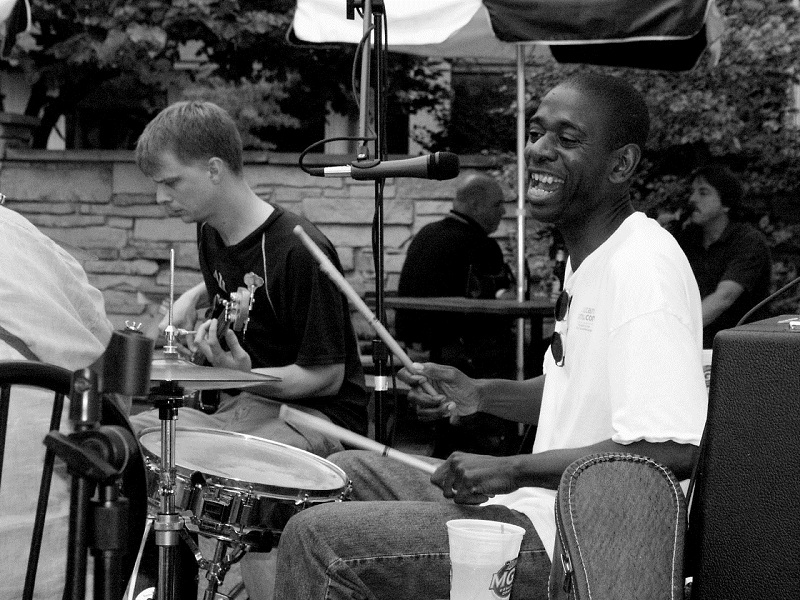 "I considerer myself real blues and I’m not the only one. There are a lot of us out there who still write and perform blues as they did in the past. Keeping history alive is what I like to call it."

I think all life experiences has played a part but the biggest part is all the people I got to play with and met down the road.

I got so many good ones but the best was in Chicago’s millennium Park where I got to share the stage with the late great Koko Taylor and David Dee standing next to them singing Sweet Home Chicago. The worst was when my very good friend and great guitar player Raoul left the band and later passed away.

Which memory from Eddie Snow, Oysters Rockefeller, and Tom Irwin makes you smile?

With Eddie Snow was the way he enjoyed playing. He was always happy no mater what and Oysters... Oh man we had some great times on the road and Tom, well Tom is my best friend and favorite song writer. Everything about Tom makes me smile.

Would you like to tell your best memory about Koko Taylor, David Dee, Lonnie Brooks and Phil Guy?

Well I told you about Koko & David, Lonnie Brooks a great man and good friend. Whenever he comes to town he would ask if BMJ could open for him. He says that I remind him of his brother Reggie. Phil Guy another great blues man when I was with Oysters Rockefeller we would open up for Phil on occasion he loved that I could sing and play drums and harp at the same time. "I got so many good ones but the best was in Chicago’s millennium Park where I got to share the stage with the late great Koko Taylor and David Dee standing next to them singing Sweet Home Chicago." (Photo: Reggie and Koko Taylor)

To keep doing what you love no matter what people say or think and when you write a song, write it for you someone out there will relate and perform it with all you got. That came from Eddie Snow. Tom Irwin told me when you are going through your worst of times write a song. Thanks when I write most of my happy song.

Are there any memories from the road with the Blues, which you’d like to share with us?

Not at this time.

Blues is a big part of American history and I hope it keep its natural roots. Today’s blues is becoming a lot more southern rock based and I think its loosing it natural flavor its history.

Don’t become a Stevie Ray Vaughan. Stevie was a great musician and has done a lot for the music but he’s not the only one. Studies do your research and find yourself and your own style. We got enough Stevies out there already its like Elvis impersonators enough already. 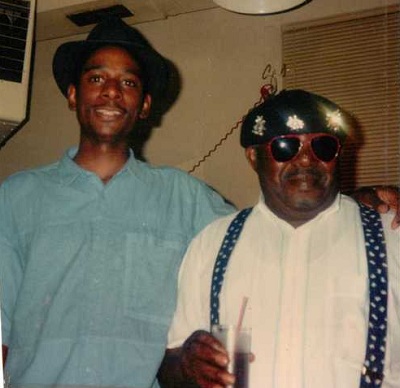 The best Jam was when I played with Eddie Snow, James Snow, and Machine Gun Bill Evans, Frank Parker, Henry Miles, Brian Pryor, Graylen Neele and I played drums it was down south. The best jam ever. Millennium Park Chicago a great place and a wonderful time.

"Blues today for me give me expression and a way out from the everyday bump and grind also something to leave behind." (Photo: Reggie and Eddie Snow)

For me playing Festivals lots of festivals.

The days my children where born. That day God has given me a reason to keep doing. I have 5 sons I hope someday they will carry on what I have started.  Second the day I met Eddie Snow, Tom Irwin, Alexis Rodgers, Dan Grover, Bob Hagler and Willie Christmon and many others. Whom I been blessed to have made music with.

I don’t think too much when I’m on stage. I’m into what I’m doing at the time. Contact with the people, fun fun funtastic.

Yes I considerer myself real blues and I’m not the only one. There are a lot of us out there who still write and perform blues as they did in the past. Keeping history alive is what I like to call it. 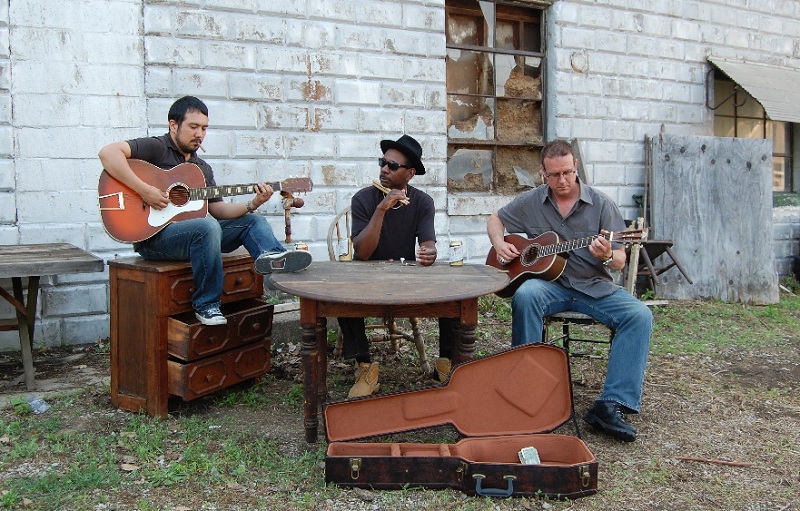