Laurie Garman was born in 1950, and started playing harmonica in 1965. His first recordings were an album and single with Key Largo on Blue Horizon records in 1970. Subsequently he had quite a few session credits, including Bob Marley and the Wailers, blues guitar legend Freddie King, two albums under his own name by record producer Mike Vernon, two albums with blues legend Lightnin Slim, an album track with US soul group Bloodstone, a session with UK singer song writer Gerry Rafferty, an album track with UK rock band the Inmates, an album with UK band the Enemy Within, theme music for Mojo Workin on Channel 4, plus many other more obscure recordings. 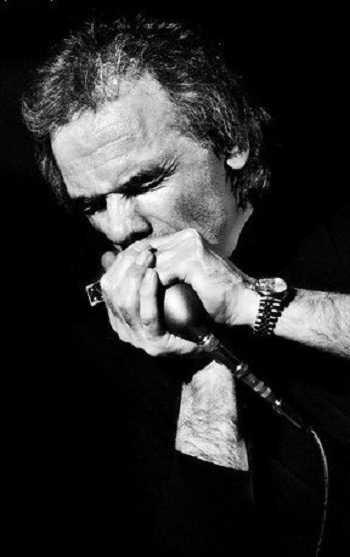 Laurence Garman began his interest in rock and roll at age eight as an enthusiast of the music of Elvis, followed by his purchase of a record player at age twelve, resulting in his building up a collection of Little Richard, Ray Charles, Fats Domino, et al. Many of the circuit bands featured vocalists who also played harmonica, and Laurence immediately bought one. However, it was the wrong kind and he read in Melody Maker that he required an Echo Super Vamper. Listening to and reading about the blues became an obsession. As with many self-taught musicians, Laurence learned by playing along with records. He also attended performances by touring American blues harmonica players such as Little Walter during his gig at the Hammersmith Odeon and Paul Butterfield at The Marquee. In 1966, along with school friends, Laurence formed The Junk Shop Blues Band. The next year, he met guitarist Laurie Sanford via an ad in Melody Maker. As a result of this meeting, Laurence hooked up with Alexis Korner, resulting in Alexis and Laurence regularly playing clubs such as Bunjies and Les Cousins. This was followed by Laurence joining Slamhammer.

Learning about the blues is like learning a language. It's a language that many people speak a little bit and that most people feel they understand. I like to think it's a language that I do and that I can converse fairly fluently. Absolute mastery belongs only to the very great artists whom we all admire.

How do you describe Laurie Garman sound and what characterize your music philosophy?

I think of myself as an accompanist. I believe my job is to enhance what the singer and the other musicians are putting down and to emphasise certain points in the rhythmic and melodic content of the music. 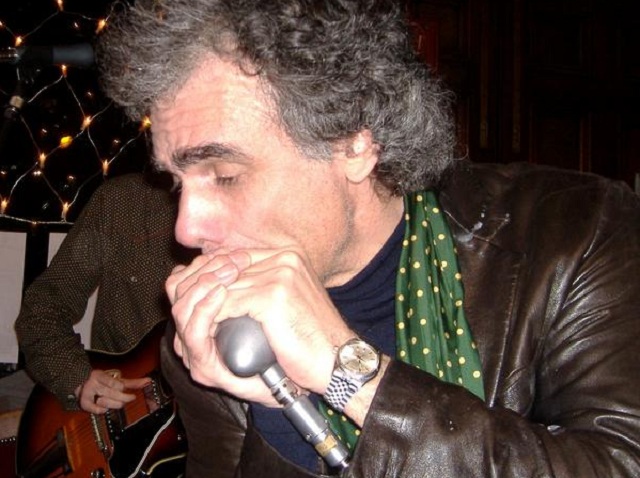 "All of us who play blues are revivalists to some extent as the music itself reached its artistic peak in the middle of the last century when it was still a contemporary art form. Fortunately many of those playing it today are taking good care of it and allowing it to be preserved in good condition."

All of my time in music has been interesting but maybe the early years were best in terms of hearing all the great records for the first time. My best ever moment in music keeps coming around-it's whenever I'm playing and the sound is good and the musicians are together. Same with the worst moment-when the sound is not good and the musicians are not working together. That's when you look at your watch and think 'How much longer!'

It was certainly great to meet and talk to some of the great blues artists such as Muddy Waters, Howlin' Wolf, George Smith and others. These people had a lot of experience of being asked silly questions by starry eyed kids and generally speaking they were pretty polite and indulgent although Wolf was not too easy to communicate with. The best advice? I'm not sure if anyone told me personally or if I read it somewhere but the best advice for blues harmonica player is 'Don't play too much or too hard!'. That's what I tell other people and I try to stick it to it-but I don't always succeed.

Are there any memories from Mike Vernon, Lightnin Slim and Key Largo which you’d like to share with us?

I met Mike Vernon in '69 when he signed our band Key Largo to Blue Horizon records. We were playing Chicago Blues. When it came time to record Mike had just recorded great Chicago style albums with Bacon Fat and George Smith so he got us try something different with horns and more varied material. I subsequently did sessions for Mike with Lightnin' Slim, Freddie King, soul band Bloodstone and Mike's two solo albums. Mike is notable for his fantastic enthusiasm in the studio. I saw him just last year when my current band, Jerimiah Marques and the Blue Aces played the Mijas Blues Festival in Spain near where he now lives, and hopefully I'll see him again for this years festival in July. 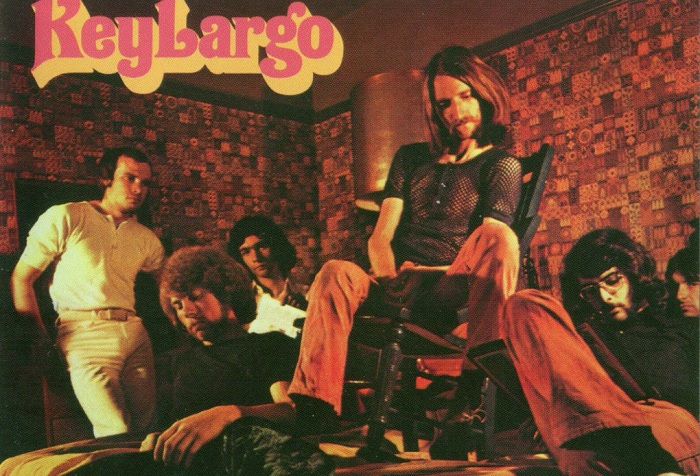 "If blues music, soul music and reggae music have a connection I think it is that they are all very soulful and have a compelling rhythmic pulse-they come from the hip as much as from the head."

What are the reasons of British blues boom of 60s and what are the differences of today’s local scene?

Actually there were two British blues booms in the 60's. The first one was in 63/64 which coincided with the Folk Blues Festivals coming to Britain and also the breakthrough of the Rolling Stones. That one had thousands of bands all with maracas playing Bo Diddley songs. That quickly died out and there was another boom in '67/'68 which was sort of led by the first Fleetwood Mac and that boom sort of morphed into Led Zeppelin and progressive rock. The difference between then and now is that today young people who want to play blues tend to study it quite deeply and work hard on their technique, whereas back then it was more like a craze when everybody jumped on the bandwagon overnight and then back off it six months later when a new trend came along.

Moments that stood out from your acquaintance with Jimmie Rodgers, Champion Jack Dupree and Jo-Ann Kelly.

I met Jimmy Rogers in '72 I think it was. He was over as part of a package and myself and a couple of friends went to interview him at his hotel for 'Blues Unlimited' magazine. He gave us a great interview and we asked him to come and sit in at our pub gig the same evening. He agreed at the crowd loved him-they didn't really know who he was but they kind of realised that he was someone important!

I jammed with Champion Jack a couple of times once at the Witches Cauldron club and once at Studio 51 where the Stones used to play. Actually it was my friend Paul Rowan who was Jack's regular harmonica player when he was in London and they made an album together.

I used to see Jo Ann Kelly at Bunjies Folk Cellar in '68. She would often ask me to do a couple of songs with her-just to encourage me I think! She was often accompanied by a great harmonica player called Steve Rye who played like Sonny Terry. Sadly both Steve and Jo Ann both died young. Jo Ann was a great artist , one of the finest blues singers of all time , male or female, black or white and still deserves to be recognised as such. 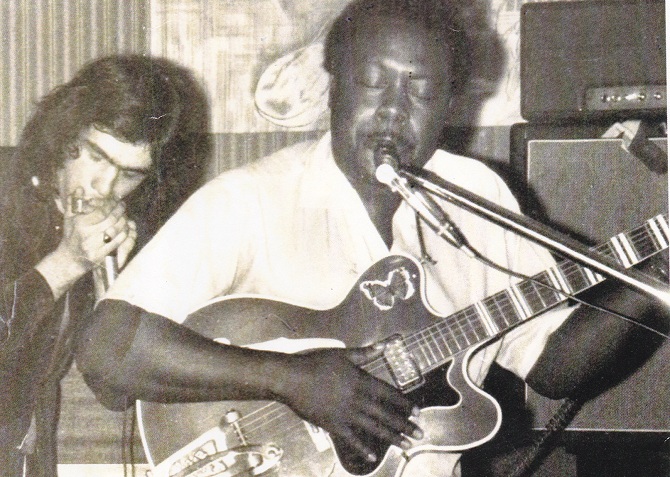 "My best ever moment in music keeps coming around-it's whenever I'm playing and the sound is good and the musicians are together." (Photo: Laurie & the late Jimmy Rogers)

All of us who play blues are revivalists to some extent as the music itself reached its artistic peak in the middle of the last century when it was still a contemporary art form. Fortunately many of those playing it today are taking good care of it and allowing it to be preserved in good condition.

I saw Little Walter perform live in '67 and I have friends who saw him in '64. The performing environment didn't allow him to come across at his best but it was a coup just to see him and be able to say 'I saw Little Walter!'

I saw Paul Butterfield twice in '66 and once in around '83 or '84. When I saw him in '66 with Mike Bloomfield and the original band I was already a massive fan. I have to say that he really delivered and it was an incredible experience. The second time around he wasn't quite the force he had been as we all know.

I met Bob Marley just the once when I did a harmonica overdub on one of his tracks at Island Studios. They wanted me to do another one but the tape they had bought from Jamaica wasn't compatible with the London equipment for some reason. All the Wailers were there and I can tell you that it was a very smoky atmosphere.

I played with Alexis at Les Cousins folk club in London and at the Half Moon in Putney both in the mid to late 60's. I kind of knew him from the scene and he was another person who was very friendly and encouraging to young players. He had a kind of 'father figure' aura even then although he would have been barely forty years old at the time. 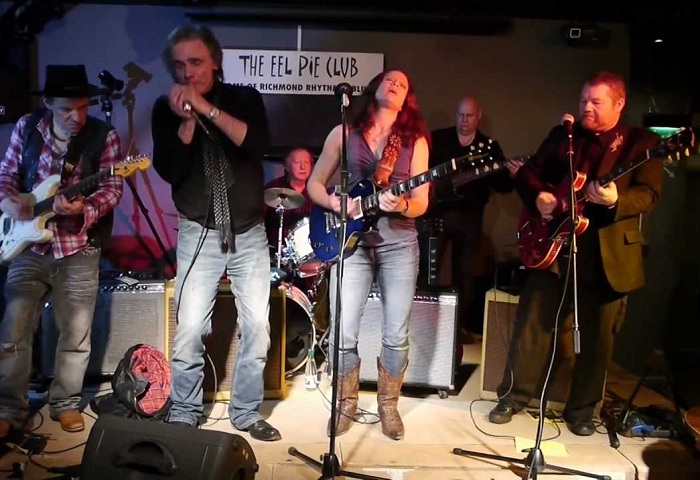 "I think of myself as an accompanist. I believe my job is to enhance what the singer and the other musicians are putting down and to emphasise certain points in the rhythmic and melodic content of the music." (Photo: Laurie on stage to The Eel Pie Club)

What are the lines that connect the legacy of Blues with Soul and continue to Rock n’ Roll and Reggae music?

If blues music, soul music and reggae music have a connection I think it is that they are all very soulful and have a compelling rhythmic pulse-they come from the hip as much as from the head.

The harmonica has flourished within the blues because that is where it just seems to work best.I think that when most of us first heard records like 'Hoochie Coochie' and 'Smokestack Lightnin' it was the harp which was key to getting us hooked.

The blues harp does not have too many secrets these days because all the knowledge pertaining to it is freely available on the internet. That means that there are more good players than ever before but strangely none that are able to surpass the greats of yesteryear-probably because the zeitgeist is different.

If I had a time machine I think I might like to go and hear Muddy Waters and his band on the southside some time around 1954!. 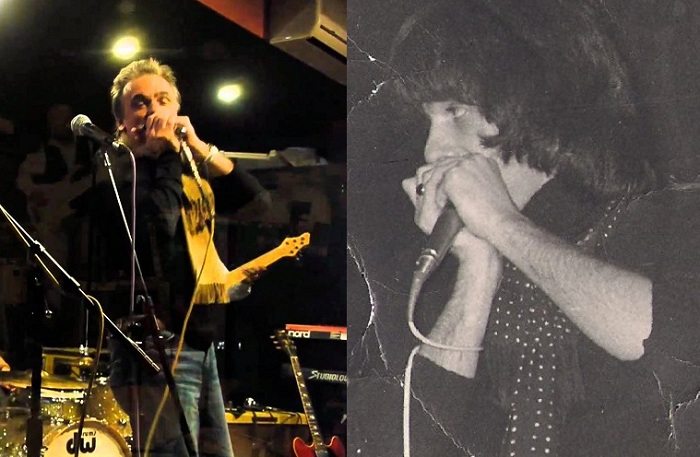