"The best advice anyone gave me was be yourself and never give up."

Allan John Atkins is an English heavy metal vocalist, best known for his association with Judas Priest. With a wife and young daughter to support and no record deal in sight, Atkins was forced "to get a haircut and a 9-to-5 job" in May 1973. As of 2012, Atkins fronts the band Atkins/May Project, which also features guitarist Paul May. A press release dated 21 May 2011 stated that Atkins would be contributing session vocals for the heavy metal opera project, Lyraka. In 2013, Atkins recorded a solo album of his favorite songs written between his days in Judas Priest and his Holy Rage days. Allan's autobiographia "Dawn Of The Metal Gods: My Life in Judas Priest And Heavy Metal” (co-written with Neil Daniels) is written in a very informal style, with Atkins giving his opinions on the music of the day as he is telling his own story. Allan's last album titled Reloaded and released in 2017. 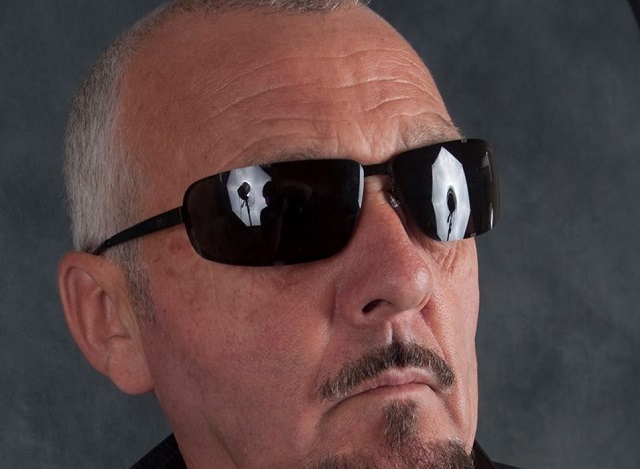 Al Atkins was the founding singer of Judas Priest who regrettably had to trade in his mic for a 9 to 5 to support his family. Atkins recently spoke about his new project and how Judas Priest would’ve sounded “more like AC/DC” had he stayed on board. Al Atkins formed a band in Birmingham, England in 1969, which he named Judas Priest after the Bob Dylan tune “The Ballad of Frankie Lee and Judas Priest.” Despite playing high-profile gigs landed for them by their then-manager, Black Sabbath guitarist Tony Iommi, the band struggled to make ends meet. In 1973, Atkins stepped out to land a “real job” to support his family and the band moved forward with a young man named Rob Halford — the rest is history. Atkins has joined forces with guitar virtuoso, songwriter, and producer Paul May to form the creatively titled Atkins May Project. The prog-metal duo just released their debut album ‘Serpents Kiss,’ which features a roaring cover of  the Kiss song ‘Cold Gin.’ In addition to the Atkins May Project, Al has released several solo albums and also performs with the band Holy Rage — he remains close with the members of Judas Priest to this day.

How has the Rock and Metal Counterculture influenced your views of the world and the journeys you’ve taken?

When heavy rock and metal came about in the late 60's I was drawn into it immediately...I always followed the progression of music since the beginning of the early 60's but leaned towards bands like The Yardbirds or The Who and never mainstream pop...Although these bands charted it was the norm that you had to have hit records to make it big time... Then came the 60's blues boom which a lot of bands took up including myself. John Mayall took the reigns and everyone followed. Great guitarists started to shine like Eric Clapton, Peter Green and Rory Gallagher to name a few and it was a fun time too because anyone could get up on stage and have a jam with musicians they had never met before ..it was not what blues had originally started out has but great bands were being created like 'Cream' who mixed blues with jazz and pop music...in the late 60's bands like Black Sabbath , Judas Priest and Led Zeppelin were still using blues licks in their music until it all got very heavy....

How do you describe Allan Atkins sound and songbook? What characterize your music philosophy?

I have picked up so many influences from all these years which make up the music that I write today. My philosophy to metal music is that it is the most powerful phenomena of the 20th century which takes you down different avenues of styles like Thrash, Power, Industrial, Black, Gothic and Death to name some...your melodic rock for example had remained the same over the years.

Which meetings have been the most important experiences? What was the best advice anyone ever gave you?            (Photo: Jug Blues Band, 1968) 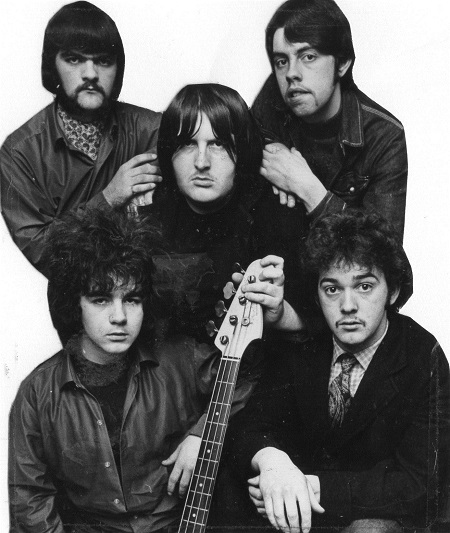 Meeting Robert Plant who lived around the corner from where I worked in West Bromwich…he took me to his house and we jammed some blues together, he on his Fender Telecaster and me on harmonica. Although we were the same age around 20 his knowledge of the blues was amazing and he introduced me to a host of early American blues artists that I didn't know of...we played together on the same bill one night, he was in a band called 'Robert Plants Band of Joy' and I fronted 'The Bitta Sweet'…great memories and little did we know in the next few years with Jimmy Page he would form 'Led Zeppelin and me 'Judas Priest', two bands that would go down in history.

The best advice anyone gave me was be yourself and never give up.

What I miss most is that all musicians helped everyone else out, lending gear on stage if you had a problem, giving young bands the chance to open up for you but all that seems to be changing and now up and coming bands have to pay to play alongside top acts and them charging to meet and greet their fans too who have probably already bought their album, 't' shirt and cap....I fear that some young artists are now having to play in tribute or covers bands to make a bit of cash instead of writing and creating their own music…shame...I blame the music industry..

What are the lines that connect the legacy of UK music from Skiffle to Blues, Psychedelic, Hard, Rock and Metal?

It's a progression a change of style and movement like art ….

What has made you laugh from Jug Blues Band era and what touched (emotionally) you from Judas Priest era?

The very last gig the 'Jug Blues Band 'played was at the Civic Hall, Wolverhampton in 1968, we played alongside Spooky Tooth and Slade and also on the bill was three-piece blues band 'Evolution' who came backstage and asked me to sing for them. They were just off on a tour of  Morocco and so I thought why not and I left my band for a bit of  African adventure...Their manager was Jim Simpson who also managed Black Sabbath and he said that I also had to drive the tour bus too which I told him politely to fuck off and I went back to the Jug band cap in hand which in turn they also told me to fuck off....lol...the best bit was when 'Evolution' eventually went they had to have all their hair chopped off before they could even enter the country, glad I didn't go...I nicked guitarist John Perry and bass player Bruno from 'Jug' for my next project  which was 'Judas Priest' in '69..

It was probably when I left Judas Priest having put so much into those early years, I went through two-line ups and 4 drummers from '69 to May '73 playing anywhere and everywhere, we did over 150 gigs in '72 alone but me being the only one married with a child and still very little income from the band I decided to leave and get a nine to five job... 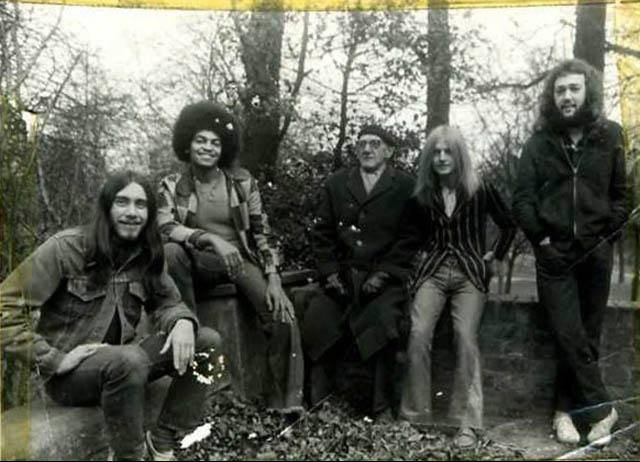 "I have picked up so many influences from all these years which make up the music that I write today. My philosophy to metal music is that it is the most powerful phenomena of the 20th century which takes you down different avenues of styles like Thrash, Power, Industrial, Black, Gothic and Death to name some...your melodic rock for example had remained the same over the years." (Photo: Judas Priest, 1973 - Chris Campbell, K.K. Downing, Allan Atkins and Ian Hill)

One of my favorite memories is playing in 'Judas Priest' on the same bill has 'Thin Lizzy' who I loved especially Phil Lynott who was also born in my home town West Bromwich...it was at the Bingly Hall, Stafford and we had a little smoke of grass and had a few laughs together before the show. Phil was an incredible front man and a great artist and has been sorely missed over the years...

To me it was just another movement in music which caught on but unlike the punk movement you had to be first class musicians to play it...

I would love to go back to the days of 'CREAM' my all-time favourite band of the 60's, it seems like yesterday I stood in front of Clapton with a tear in my eye...god they were so good. I would spend a day just watching and listening to them play...that's all''. 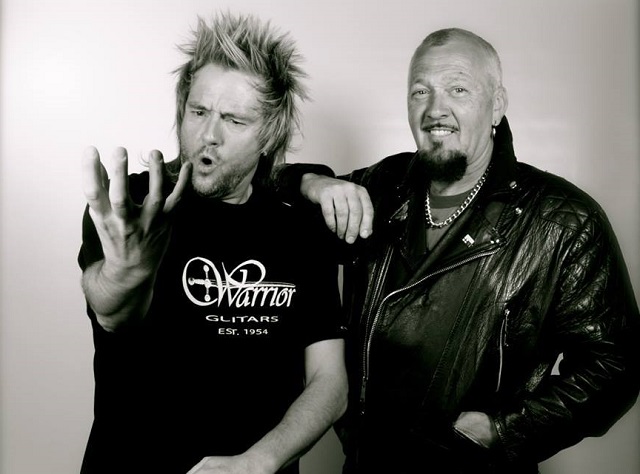