"It’s getting harder and harder to find and hear great rock and roll players these days. It’s mostly Rock with no Roll."

Guitarist/composer/band leader Burnin' Mike Vernon born in 1954 (Albuquerque, NM), joined his first band, Stoned Catsup, in Arlington, Texas, in 1969. From '73-'75 Mike studied Spanish guitar at the Univ. of Texas-El Paso and then returned to the Dallas-Ft. Worth area where he played in various jazz, blues, rock, and western bands. During this time he had the opportunity to sit in with such greats as Freddie King, Big Joe Turner, Stevie Ray Vaughan, and Gary Duncan.

In '79 he formed the instrumental group Perry Mason & the Defendants. The group played all over the north Texas area, Louisiana and Oklahoma. By '82 the band's sound turned decidedly surf in nature as the band performed surf guitar songs from the '60's and originals by Vernon. In 1985, Vernon moved to Austin and in 1987 formed 3 Balls of Fire AKA The Men with the Burning Guitars. Joining in on bass and drums was Vic Gerrard and Chris Stix Staples, forming the tightly-wound rhythm section on the Balls' self-titled debut recording on Amazing Records in 1987. 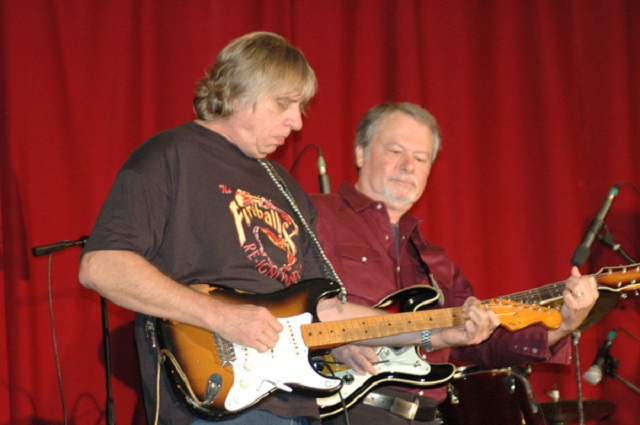 In 1989, Gerard and Staples joined Two Hoots and a Holler, and Vernon kept the group alive by adding Jackie Newhouse (Stevie Ray Vaughan's bassist until 1980) and a revolving list of stellar players from the Austin area. In the early '90's, the group released two cassettes, toured from Louisiana to California, had their music featured in the movie Good Girl, Bad Girl, and opened for Dick Dale's first national tour in Austin in 1993.

How do you describe Mike Vernon sound and progress, what characterize your music philosophy?

Well, I feel that my sound has within it a little bit of everything I’ve ever heard and been influenced by. It doesn’t really matter what kind of music it is as long as it’s good…a good song is a good song. I like instrumental music because it crosses all language and cultural barriers. And the guitar for me is to me the perfect medium to accomplish that. 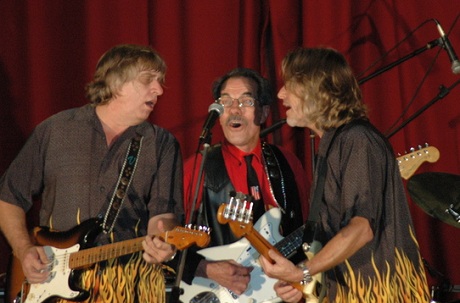 I think that the late 90’s up to now has been the most interesting…lots of things happened and I got to play with Link Wray, Nokie Edwards and Bob Spalding of The Ventures, George Tomsco of The Fireballs, Davie Allan and the Arrows, Jerry Cole of the Wrecking Crew, Wanda Jackson, Roy Head and several other of my musical heroes. One of my favorite moments was probably when I played the Austin Music Awards with Geeorge Tomsco, Jerry Cole and Mark Andes, bassist from the band Spirit. I’ve had so many worst moments that I can’t really pluck one out of my head right now!

Because jazz and blues are timeless and universal.

Do you remember anything funny from recording and show time with the 3 Balls of Fire?

I don’t know…one time I was drunk at a gig in Austin in front of a lot of people and had a beer in my hand while I pulled the guitar strap around my neck and poured beer all over my head! Not funny to me but everyone else seemed to think so!

Again, most memorable gigs were with some of those guys mentioned above. With Link Wray in New Orleans at the Ponderoda Stomp in ’05 was pretty cool. And playing the double-lead part at the end of “Hotel California” with Don Felder of The Eagles was a great moment for me. And playing Walk Don’t Run with Nokie Edwards was really cool, I must say! 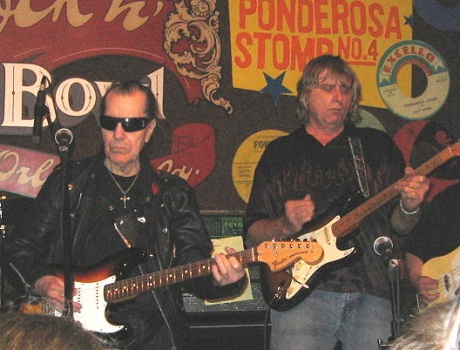 Best advice from a Jerry Cole: “Keep doing what you are doing and don’t look back”.

"Jazz and blues are timeless and universal."

Are there any memories from Link Wray and Jimmy Carl Black which you’d like to share with us?

Jimmy Carl Black was a real great guy and very funny. I had a gig in Dallas and he and I drove up there from Austin in my ’66 Chevy. His stories from Mothers of Invention days were hilarious and I learned a lot about the real Frank Zappa. Driving to New Orleans with Link Wray was really cool and I remember him telling his wife, “You know I don’t care about money so don’t even talk to me about it!”  Jerry Cole talked about what it was like to work with Brian Wilson and Phil Spector – very fascinating stuff!

From the musical point of view what are the differences between: Texas, West Coast and other local scenes in USA?

Well, West Coast guys, for the most part seem to play more on top of the beat whereas Texas and southern players play more down in the groove. The scene in Austin is real close knit as opposed to LA which is more wide open and less family-like.

What do you miss most nowadays from the 60s - 70s? What are your hopes and fears for the future of music?

Well, it was easier to keep up with all the music that was coming out in those days. Nowadays, there is so much that I can’t even begin to try. There was a lot of great music then and it wasn’t so over-produced as are so many of the recordings today. Music nowadays is such a marketable product and there is so much money involved and at stake that it has changed everything. On the positive side, everyone now can sell their music on the same download sites as the Beatles or Madonna! People will always be into music and hopefully musicians in the future will not forget or forsake the great music of the past. 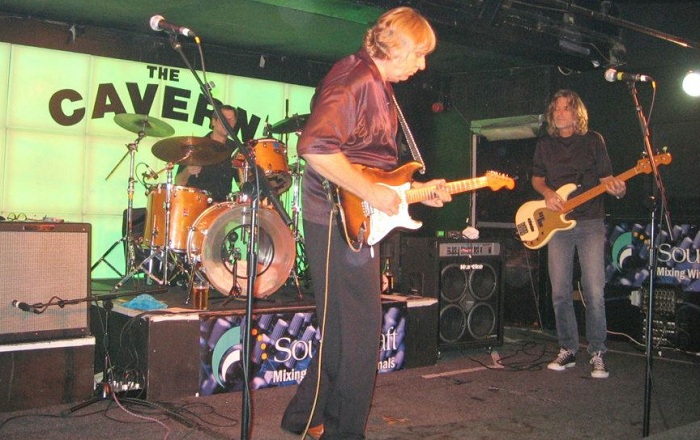 "Music nowadays is such a marketable product and there is so much money involved and at stake that it has changed everything."

Which memory from Freddie King and Stevie Ray Vaughan makes you smile?

The time I got into a fight with Stevie Ray makes me laugh…it was 1978 and we were at the Cave Club in Dallas arguing over the Quicksilver Messenger Service whom I had just played with in San Francisco…Stevie said they sucked and I said they were great. We ended up rolling around on the floor and Doyle Bramhall had to break us up.. We all had a beer afterwards and laughed about it! When I was around 15 I used to always bum cigarettes from Freddie King at a joint in Dallas called Mother Blues and he always would say to me, “Here he comes that kid and he‘s gonna ask me for a cigarette!” Freddie was a real nice guy and I always remember him at the pool table smoking and talking about blues music and players.

What are the lines that connect the legacy of Blues with Garage, Jazz and continue to Rock n’ Roll and Surf music?

I guess that depends on where you are coming from. For me, it all starts with the great blues, jazz and rock and roll players from the 50’s and spreads out from there. A lot of people pick up on my blues and jazz background listening to my surf-oriented music. Once it’s in you, it never leaves!

How has the music circuits changed over the years? Do you believe in the existence of real Rock n’ Roll nowadays?

It’s getting harder and harder to find and hear great rock and roll players these days. It’s mostly Rock with no Roll. That’s one thing great about Texas, there still are guys there can play the shit out of real rock and roll. But so many of the clubs are not interested in rock and roll per se…just how many asses can you get in to fill the seats. 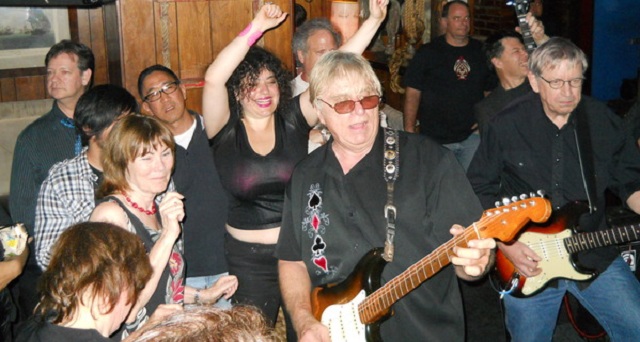 "West Coast guys, for the most part seem to play more on top of the beat whereas Texas and southern players play more down in the groove. The scene in Austin is real close knit as opposed to LA which is more wide open and less family-like."

What has made you laugh lately and what touched (emotionally) you from the music industry?

I get a kick out of the crappy things I hear and see on TV and radio. So much of it seems made for 12 year-old girls…but what makes me laugh is when I pull my car up next to a guy who is an adult and he’s over there in his BMW rocking out to music for little girls! I want to say, “For God’s sake, what is the matter with you?…man up!”

I think it would be cool to go back to Memphis and hang out at Stax Records Studios for a day!

Playing guitar, getting laid and getting a good night’s sleep! 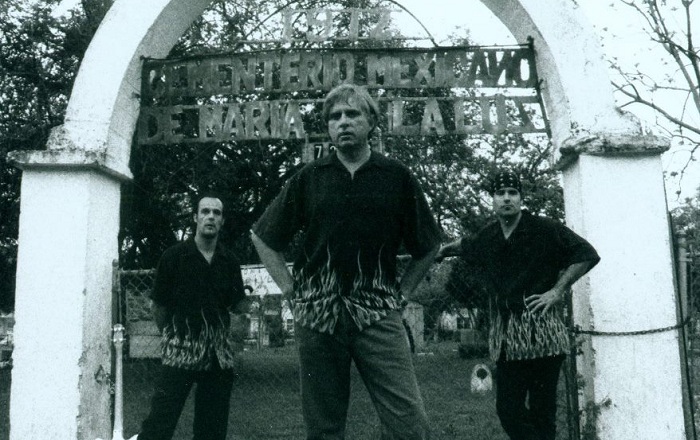