(Original covers)
Davy Graham "Large As Life and Twice As Natural" 1968
Davy Graham: guitar, vocals
Dick Heckstall-Smith: saxophones
Jon Hiseman: drums
Harold McNair: flutes
Danny Thompson: bass
This is Davy Graham's third adventure on an LP …and along roads that are folk, blues, jazz, Arabic, Indian-and one or two more things. Travelling with a guitar and also Danny Thompson, bass Jon Hiseman, drums, Harold McNair, flutes, and Dick Heckstall-Smtih, saxophones. Travelling like Baudelaire's travellers; 'who move simply to move'. The man himself is equally at home in Edinburgh ('a stately city'); Glasgow ('such warm acid'); or in Athens ('gold and purple in the evening. Smooth as marble hollow solid eyes of panthers. So exhausting for strangers.') But he is never at home in any one place for very long. And this seems to be in exact parallel with his music. For he cannot be pigeonholed: fortunately. 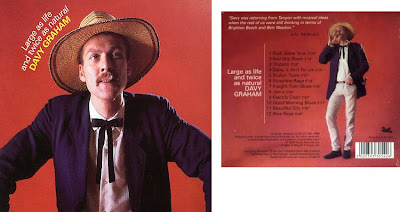 (CD Sleeves)
He is a life-member on the roundabout of alteration. Like his deep-down blues, and you have to accept his setting of a 1000 year old Romeo and Juliet story. Go with him on a musical flight to Morocco ('Jenra' : pavilion'd in splendour) and the return journey will be via an extended raga. But always-I should add-in the company of originality. For after introducing North African music to Western guitar, he has now done the same for India. It's a bit like Dr Bannister running his 4-minute mile and then going off in search of another distance. All of which is quiet disparate, but also very thorough and exciting and satisfying. In the past few years Davy has played his folk at the Edinburgh Festival, his jazz in some of the best clubs in London, his Arabic interpretations in Tangier and his ragas to people who know Ravi Shankar's records. (Unlike those who have gone to India for a 3-week Sitar course, he has investigated the form of ragas.) So far nobody who has listened has found his music a disappointment. And certainly not the many who have brought his two previous LPs.
Following this later collection I know have no idea where his next stop will be. He might take a bicycle to Mexico or slip inside a carrier pigeon's message to Senegal. Or it could be Canterbury. At least I know it will be fascination though as his producer of records, apart from supervising the sessions, I have found myself becoming more and more an editor of the ideas, which zoom out from him like flying saucers, with there origins just as mysterious. He will sometimes break off in the middle of a 'take' that another guitarist might become a Faust for, to tell me about three points of recording and it is preserved there for everyone to buy-he rarely performs it before an audience again. "I have to avoid the cliche," he says. "I want to keep them on the move…"Well on behalf of those of us who have done cur best to keep up with him. I hope he does. Original sleeve notes by Ray Horricks.