Greek Blues Scene: An Interview with Rebetoven - The Blues has a brother and call him Rembetiko

Rebetoven: Standing at the Crossroad

In the mid ‘90s, two friends from Athens, Athanasios Klasinas and Stavros Papadakis create a duet “The Southerners”.  The Southerners mainly compose songs for two guitars with clean blues style. Quickly added Demetris Korentzelos on keyboards and the group composes rembetika songs. In 2001 Gregory Langas on violin, Marcos Kontos on tzoura and mandolin entering in band with bassist Demetris Pallis and Michalis Georgousis on drums and renamed to Rebetoven. In 2004 Rebetoven make their first live.

In 2007 Rebetoven continue to appear live mainly in musical scenes of Athens and in 2008, Demetris Sandalis is the new bassman. In 2009 in Ilion Rock Live with new drummer Thomas Kogias. In 2010 still have their songs in local juke joints and 2011 enter in studio to record their first album with producer Athanasios Alatas, with 12 songs composition and lyrics by the band. The band has performed in various local Festivals, Mama Africa Festival, 1st Antiracist festival of Kalamata  and European Music Day in Athens.

Through from the blues, rembetiko and rock, the band express their creations.  Creations where "mix" the acoustic and electric sound. The band with loose parts for improvised play ballads, hypnotic blues, heretical waltz, melancholic serenades, rembetika, and 12bars. Lyrically pushed mainly from the "production" of love with a distinctly "rembetiko" mood. From "blue note" once "rages" and wraps seeking the "outbreak" of rock.

What does the BLUES & REMPETIKO mean to you & what does Blues & Rembetiko offered you?

Stavros: The first and most important is that my being'' found'' a passage through this music, a path of expression and understanding and treatment of this world. As a result it offered me a form of meditation, a personal prayer let’s say. 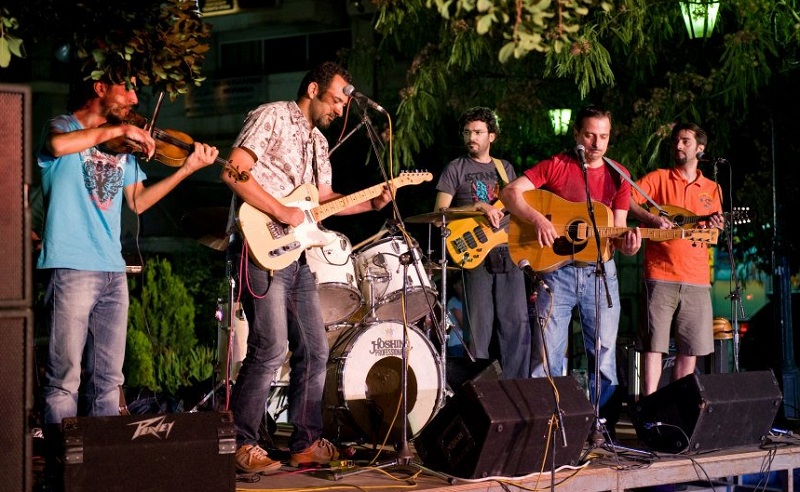 "The reality makes the best stories and music, a reality that our mind sometimes imagine, envision, and filtrate so we can bear it."

How do you describe Rebetoven’s sound and progress, what characterize your music philosophy?

Stavros: Is an innovative sound. It has strongly rembetiko element, but embeds it in the blues, into the primary epidedo, the level of composition. The compositions are simple and at the front .This make them very direct but diversity characterizes it and variety of sounds flirting with psychedelia.

The reality makes the best stories and music, a reality that our mind sometimes imagine, envision, and filtrate so we can bear it. This is my music theory.

Thanasis: Our music philosophy is characterized by a blues-rembetiko feeling which is filtered through our musical ideas.

Stavros: The women that I loved, the life of the night, the lonely people, poverty and because I am Greek, the fun and feasting. I have played for years in a small places and I have seen how the pain communicant and converted into joy, even for a while.

What is the relationship between Blues & Rembetiko lyrics? How difficult is to write in Greek a Blues song? Stavros: It's the common ground of people who live in the boundaries of the margin and all that this includes. The anrthopos of rembetiko- blues has deeply aware of the suffering that haunts him and describes it simple but with substances. Eros and particularly the woman exalted in the mind of rembetiko- blues man and acquire the form of a muse, so he tells her how much he loves her, that he would marry her and that together we will live in riches, and so on. This is the optimistic scenario. On the flip side of the coin, he condemns her to leave him and now he gets drunk, that he cannot find job and more. But the lyric extends to other issues such as racism, politics, with an apolitical position, professions, immigration, and death. Another common large class of subjects is the illegal activity, such as thievery, drugs, murder, gambling and prison.

An interesting point is how the musicians are addressed in to their guitars -bouzouki as if they are living organisms. Well it is very easy to write Greek blues songs with so much in common characteristics.

Thanasis: What they have in common is social unjustice combined with unfulfilled love. I think that it’s very easy to write a blues song in Greek, if you are a simple person.

Why did you think that the Blues & Rembetiko music continues to generate such a devoted following?

Stavros: It is because the basic problems of people remain unchanged and because this music has the grace to speak to senior instincts of humans.

Thanasis: Because they are authentic and they reach people’s soul.

Stavros: Our drummer is very funny and once in a concert he had taken, for a while, the role of a samurai warrior!

Thanasis: They are many, I can’t choose just one. Stavros: I will refer to an acquaintance I had with an old rempet , called Tolis Harmas, he was playing until he died in a small traditional taverns.

Thanasis: Our drummer, Yorgos Aslanis is a real showman! Our rehearsals with the band members are very important to me. Everything happens there.

What are the differences and similarities between: a Greek Rembetiko band and US Blues band?

Stavros: The Greek Rempetiko bands have more music tradition, perhaps more rhythms and more harmonious ‘’streets’’ as they called. This is because inside the long history of Greece, the various elements of East and West come into equilibrium with the local music tradition. Greece looks like a small country, yet the musical tradition is literally bottomless.

On the other hand, the American blue bands ‘they lived’ more in the present and with more multi vision for the future, which is why birth and other music formats like rock and roll and jazz. Add that they handled much better electric sound and that their audience is infinite largest. This brings greater recognition, professionalism and responsibility.

But they also have similarities, some rhythms fits perfectly into the style of playing and sometimes the style of execution is identical.

Thanasis: The tuning of the instruments and the feeling of the musicians. As they evolve other similarities will be found. I think that there are no differences between them. What do you miss most nowadays from the Blues and Rembetiko of past? How has changed over the years?

This has as a resulted to destroy the… atmosphere! We've become more cynical and there is a tendency the best things in life not to be free, but I am optimistic because the universal idea of music, especially the kind that we serve, will find a way to close eyesight and so can reopen the hearing.

Thanasis: The simplicity of the whole procedure: people involved, recording.

What are the lines that connect the legacy of Blues with Rembetiko and continue to Rock and World folk music?

Stavros: Basically, I believe that is the way some people choose to express themselves. I believe it is a common line of honesty.

Thanasis: People who live in poverty but keep their dignity. 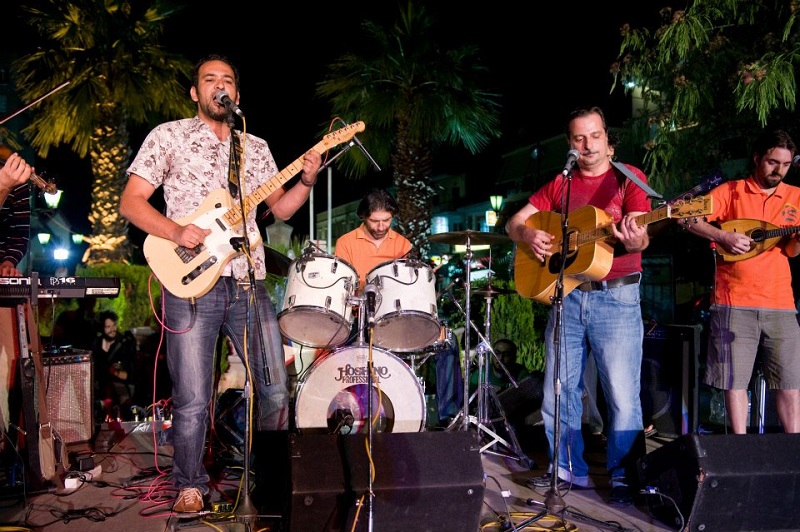 "I’m not afraid of anything because I know that people throughout the world will always listen to this kind of music. Blues and Rembetiko will never die!"

Do you believe in the existence of real Blues & Rembetiko nowadays? What are your hopes and fears?

Stavros: Of course, I believe that. My big fear is not to be, at present, just duplicators. As a consequence my biggest hope is to go one step further the creation.  To build our own history.

Stavros: This day is somewhere in the future. I would choose this day where people would have realized the truth that surrounds them.  That very day where ‘ME’ and ‘WE’ had come to Balance.  Perhaps they'll never be a day like this, but until we make this a reality, the blues and rempetiko will be the safe harbor that someone can anchoring the suffering and joys of his life.

Thanasis: I think that there’s no need for a trip like that. We can create something new and beautiful every day of our lives!

Make an account of the case of the music in Greece. What mistake of local music scene you want to correct?

Stavros: The Greek scene suffers from a serious problem: imitation this has brought an identity crisis.

The result is that the public has learned to listen 'shallow' songs with easy lyrics. In my opinion the bands and the public should take risks and be more open.

Thanasis: I would like space and respect to be given to any kind of musical expression, any music genre. 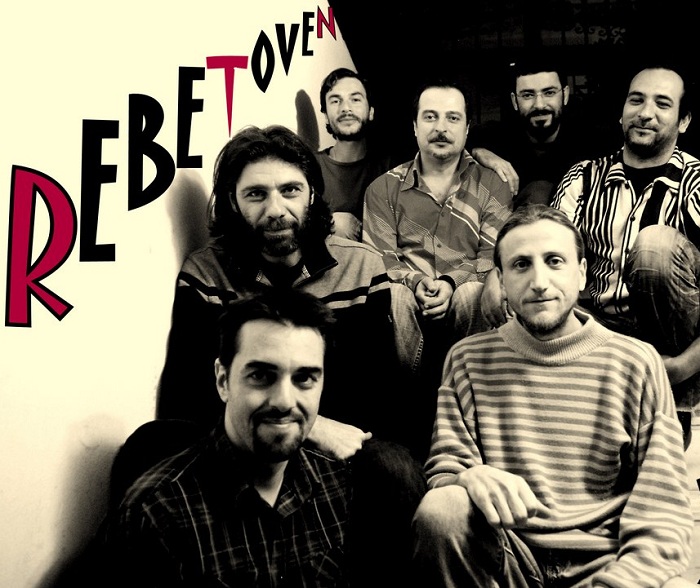