Greek Blues Scene: Q&A with multitalented John Trik (Trikopoulos) from Blues and Folk to Bluegrass and beyond

"Get all the knowledge you have to absolve from listening to the Masters and then take that and transform it into what you' re really are. Blues are a living thing. It’s like a companion to your everyday life."

John Trik (Trikopoulos) is a multitalented musician from Greece. His debut album HOLE IN THE DAY released in 2017. John says: I was born in Trikala, Thessaly, a small town in central Greece. At a very young age I showed interest on learning the guitar. My mother was playing the accordion & my father the mandolin. My brother, a huge record collector, introduced me to the Blues and Country 'n Western music. Along with the guitar came a fascination with other acoustic instruments I was hearing on these records like harmonica, steel guitar, mandolin, banjo. Started to play on the local scene while at the same time I acquired a degree on Political Sciences on Kapodistrian University of Athens. 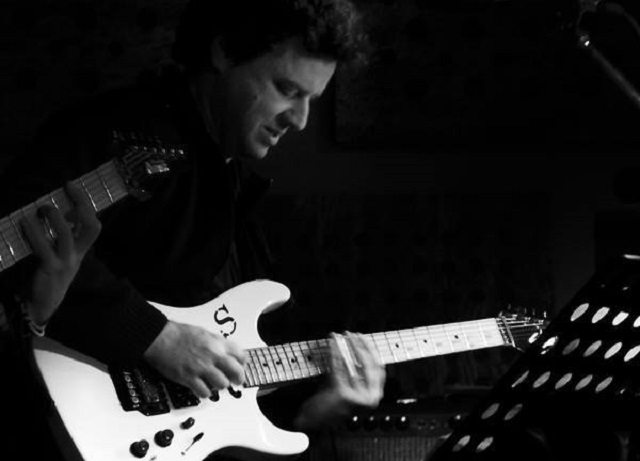 Worked many years as a professional player on the local scene and Athens scene, making a living from playing gigs, recording and giving guitar and harmonica lessons. My demo cd titled “Hole in the Day” (2017) is out with original work in the spirit of Americana.

What do you learn about yourself from the Blues culture & people? What does the Blues mean to you?

Get all the knowledge you have to absolve from listening to the Masters and then take that and transform it into what you' re really are. Blues are a living thing. It’s like a companion to your everyday life. I mean I’m not living in South Side Chicago of the 60's or the 70's or New York, I’m living in Greece in present time, with all the bad economic vibes that’s going on the last few years in Europe. So, Blues are all over the air. As an artist, you have to take these vibes and make it music, songs, paintings, something that will inspire & help the community. That’s the goal. As I said Blues it’s in your heart, you can't escape it. Some say Blues can kill you. But it works the other way. Blues can be your spiritual goodness to these crazy and dark times. And eventually they literally can save your life. That’s how it worked out for me.

How do you describe John Trik sound and songbook? What characterize your music philosophy?

I 'm really an acoustic kind of guy. Acoustic guitar was the instrument I first fell in love with. Along with the guitar came a whole lot of other acoustic instruments like dobro, banjo, mandolin, lap-steel, harmonica. I was always in love with the Americana Sound and of course Blues was the key to this wonderful journey...So my song book contains all that stuff. From the country-blues artist to the South Side Chicago sound to the folky sound of the 60's & 70's. And then of course to the evolution of that whole scene. From John Fahey to Leo Kottke and then the Windham Hill Label. From Merle Travis and Chet Atkins to Thom Bresh & Tommy Emmanuel. From Ralph Stanley and Earl Scruggs to Bela Fleck. From the Walter's and the Sonny Boys to William Clarke and Steve Baker. From Earl Hooker to Ry Cooder and Sonny Landreth. The list goes on and on, but to define my kinda music, I would say the Blues/folk/bluegrass tradition that comes from the States.

As I said before my music philosophy is that you gotta dig deep. As deep as you can. Learn the stuff you’re interested in as best as you can. I was lucky enough to learn the lessons next to guys that had the knowledge and the willingness to show me how. Due to the Internet, I would say that this has changed the last few years. People learn the stuff from YouTube or from music sites. But the real deal is to find someone to show you how to do it. The interaction of that for me is very important. And the same goes for the repertoire you like. Learn the style you like and then make it into your own music and expression.

How has the Blues & Rock counter-culture influenced your views of the world and the journeys you 've taken?   Photo by Eirini Geladari 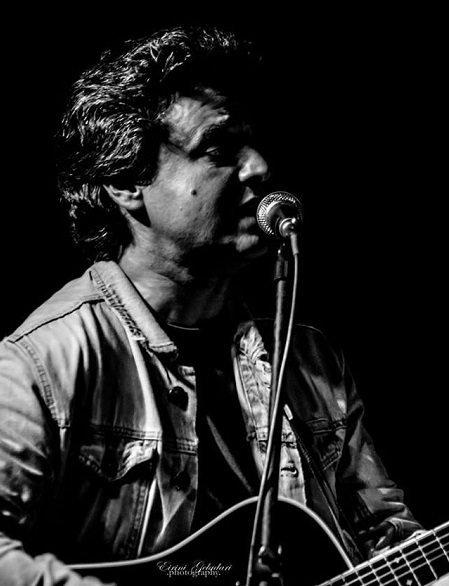 People regarding nationalities, colors and cultures have a lot of things in common. We struggle every day to find the meaning to eternal questions, to everyday life, we love and hate, we live and die...Music has so much power to the people. “Come Together” I think are my favorite lyrics. And Rock and Blues shared back in the 70's, that unbelievable power to make people come together. I’m kinda of a hippie guy. I still believe that music can change the world, can make it a better place.

Which meetings have been the most important experiences for you.What is the best advice has given to you?

Well in Greece it’s a little difficult, especially when you’re interested on American music culture, to meet people that share the same passion.Cause you know the circle of these people is so narrow. I was lucky enough to be for more than 10 years a disciple of Thanasis Bikos, a well-known Greek acoustic guitar player & music producer from Athens, who really knows what acoustic guitar is all about. Being next to him as a student and then as a co-player was really an experience I can't replace. Best advice has given to me is, talent is not enough. You have to work really hard and listen as much good music as you can.

Are there any memories from gigs, jams, open acts and studio lessons which you 'd like to share with us?

Gigs, jams, open acts are really very important on making you a good performer. If you wanna make it on a professional level you have to go for it. I was watching an interview of Doyle Dykes the other day, a favorite acoustic picker and said something very important. “Don’t ever lose your confidence”. And that’s what is all about. The gigs can help you with that. Hanging around with musicians that are better than you, always try to learn...It’s a procedure that never stops.

The thing I miss the most in music nowadays, is music that goes to the Heart. I mean that’s what Blues was all about. I believe that Music Industry stole that from Rock & Blues. Commercial music changed the rules of the game. Of course, the blues are still alive. They might resurrect into something else from young players in the States & in Europe. But to the core you can still hear it. Blues are alive in Africa with players like Habib Koite & Boubacar Traore in the great tradition of Ali Farka Toure desert blues. Blues are alive in the States, for example on the music of Baptist Church communities. If you hear Robert Randolph and the “Sacred Steel” genre of players you know is pure Blues coming straight from the Heart. 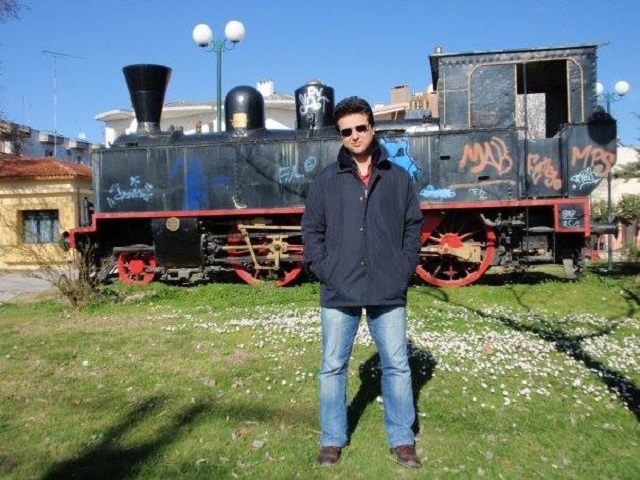 "Blues & Rebetiko share a lot of common ground. The lifestyle, the culture, even the lyrics of the songs were much alike. Of course, Blues had to do more with alcohol and rebetiko themes more about substances. But they were both music of the depressed and the poor people, the music of the outcasts of mainstream society."

I hope I can improve myself as a musician and composer and keep learning about music. It’s an endless journey and I’m so glad I took the ride. Meet people that share the same passion about American music & culture and trying to absolve as much information’s as I can. We are on a global turning point. Don’t know what to expect from that. My country is on 7 years crisis now and if things won’t change drastically, I’m afraid of the worst to come.

Make an account of the case of the Blues in Greece. Which is the most interesting in the local Blues scene?

Blues in Greece is synonymous to one band, Blues Wire. They started as Blues Gang on the early Eighties. Till that day I still believe is one of the most important things happened in Greek blues scene. Of course, with the Internet explosion you can find players that are into the Blues and Folk scene. There's a new generation of really excellent players out there and that's very hopeful for the future.

Are there any similarities between the Blues and the genres of local folk music and traditional forms?

Blues & Rebetiko share a lot of common ground. The lifestyle, the culture, even the lyrics of the songs were much alike. Of course, Blues had to do more with alcohol and rebetiko themes more about substances. But they were both music of the depressed and the poor people, the music of the outcasts of mainstream society. Some old Rebetiko recordings, especially the ones made with acoustic guitar from musicians like Michalis Katsaros on the States, bring in mind the fingerpicking playing style of early country-blues artists. Rebetiko was born from people that violently removed from their homes in the parts of Minor Asia to Greece. And Blues was born, as we all know, from similar reasons. Other Greek folk style music, like Epirotiko uses pentatonic scales which are in the heart of Blues music.

What is the impact of the Blues music and culture to the racial, political and socio-cultural implications?         Photo by Eirini Geladari 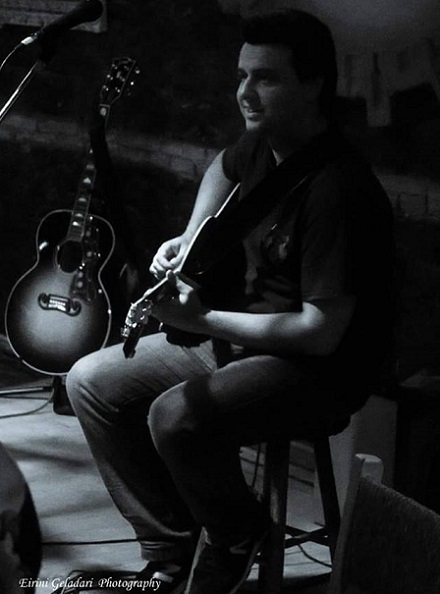 Music has always been a good reason for bringing people together. And that’s what happened with the Blues and white and black folks. Who could believe that the lonely sound of a guitar or a harmonica on a Mississippi cotton field, would have such a huge impact on some white city boys that were picking the guitar or blowing a German-made instrument like harmonica. . . It happened. The barriers fell down. Muddy Waters with Johnny Winter. Paul Butterfield & Charlie Musselwhite with Big Walter Horton, white & black people together. The Blues healed what the politicians and society was unable to fix. And that’s for me the true miracle of Music.

Let's take a trip with the time machine. So where and why would you really want to go for a whole day?

I would probably want to go back and witness the recording sessions of Robert Johnson or Blind Lemon Jefferson. Their guitar playing gave birth to Blues and Rock guitar. What we know today as modern Rock/Blues guitar is more or less the accomplishment of these guitar giants recording with their faces turn towards the studio walls and a bottle of bourbon on their side... Chilling performances that might tell us something about who we really are and what's the meaning of this journey....