"Rockabilly, blues, country, these are the foundation of American music and everybody knows you can’t have a house without a good foundation."

Tony Balbinot is the epicenter of The Cadillac Angels. Tony Balbinot’s no stranger to the realities of the music business. Having cut his teeth playing guitar for Wanda Jackson, Ronnie Dawson, Jerry lee Lewis, Link Wray and countless other “Pioneers of rock & roll”, he is currently endorsed by Gretsch guitars and was thier official “Poster Boy” in 2007. Tony brings it every single performance with his incredible lead guitar and lead vocals. Cadillac Angels front man Tony Balbinot started the band more than 20 years ago. While Balbinot is based out of Santa Barbara, Cadillac Angels has roots in Arizona. Since then they've released over 19 albums in CD, vinyl, cassette and more. 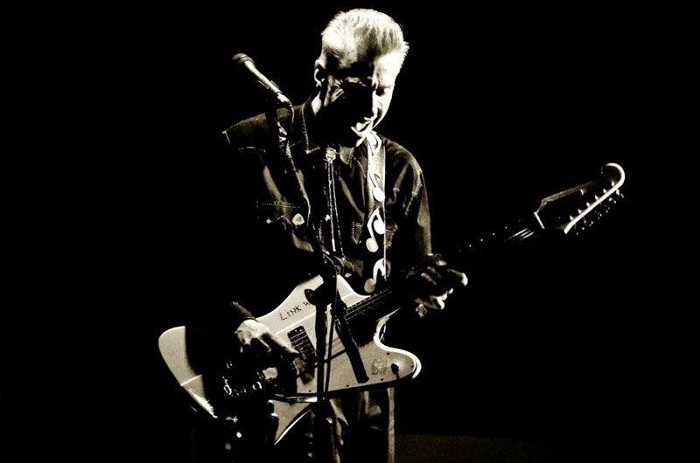 The band has been involved in movies and appeared in two films. They've thrilled audiences in more than 35 states and in seven countries. The other irreplaceable parts that make up the band are Micky Rae on stand-up bass and bass and Bob Blasi on drums.  Tony started playing guitar professionally about 27 years ago. He had the good fortune to play with Carl Perkins, Dick Dale, Ronnie Dawson, Jimmy Vaughn, Billy Gibbons and Link Wray. Tony is one of a kind, and his reputation of being one of the hardest working musicians in the business is exactly right on.

Having the good fortune to know and experience true love, to have it, to lose and to be willing to search it out again. To know that kind of passion will make anyone a better artist.

How do you describe Balbinot’s philosophy?

The backbone of my philosophy is to never give in or give up, have a dream, a vision and honor and protect it. Don’t give into fads or commercial pressure. It takes years to know who you are and what you want as an artist. Once you find that you are half way home. 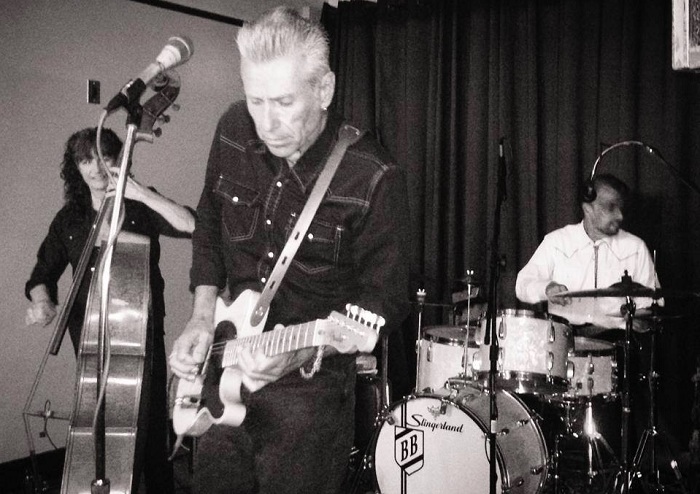 "People keep music connected. Artists and music lovers are the conduit between different music styles. People create it, and people love it or they don’t, but it keeps it alive and healthy."

I don’t let other people’s ideas and values creep into mine too much. I don’t do drugs.  I don’t get drunk, and I don’t do lazy. I have a very strong work ethic and most people can’t keep up with me for very long. We never got a record deal and I think that’s why we’ve lasted so long and why our sound has developed on its own without a corporate entity dictating our sound, our songs, and our image, they were allowed to evolve on their own. All of the record companies that I pursued years back are out of business and we’re still selling records.  The band name was born from an encounter with a little old lady with a great big Cadillac. I was on my bike and she ran me off the road. I landed on my back in someone’s yard looking up just in time to see several little Angel bobble heads in the back window of that ’62 Coupe Deville.

The most interesting period in my life is always the present, what I’m doing today, and what I want out of tomorrow. The best moments were sitting alone with Link Wray and talking about guitars and life.  The worst moment was being forced to wait for over an hour for our money at the end of a gig while these drunken and high club owners insulted me, calling me names, trying to intimidate me so I would leave without collecting the money.  I stuck it out and got the money for my band mates. That club burned down two days later.  Isn’t that interesting?

Why did you think that the Rockabilly and Blues music continues to generate such a devoted following?

Rockabilly, blues, country, these are the foundation of American music and everybody knows you can’t have a house without a good foundation. 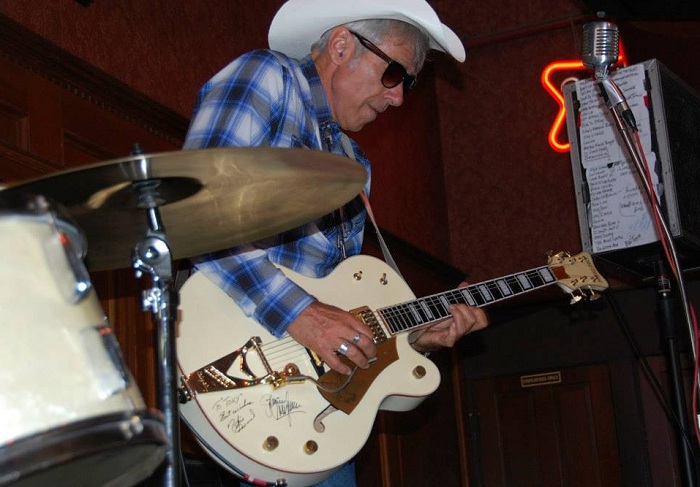 "Having the good fortune to know and experience true love, to have it, to lose and to be willing to search it out again.  To know that kind of passion will make anyone a better artist."

Do you remember anything funny from the recording and show time with Cadillac Angels?

I remember doing this great improv guitar solo on one of our songs during a recording session. It was smokin’ I don’t know where it came from, it didn’t sound like my playing. I finished up and said to the engineer, “Man, that was wild!” and then he said, “Oh, I didn’t know that was a take, I wasn’t recording.” I couldn’t play it again it came and went like a ghost.

I played with Gene Vincent’s Blue Caps in San Francisco.  That was a blast, me and Johnny Meeks on guitar.  Opening for Carl Perkins, Link Wray, and Jerry Lee Lewis are at the top of my list too.

Hanging out with Link Wray and Carl Perkins I walked on air for three days after that. And, oh Robert Plant came to one of my shows.  We sat and talked on the stage for almost two hours, like long lost friends. I’d like to visit with him again. Best advice I ever got was from a great guitar player in California, named Buddy Smith. He was an awesome talent, a combination of Freddy King and Steve Cropper. Buddy told me this, “As long as you play from the heart no one can fault you. Play from the head and they will cut you to ribbons.”

Are there any memories from Carl Perkins  and Link Wray which you’d like to share with us?

Carl Perkins was a very friendly, down-to-earth guy. He was easy to sit and talk to about anything. We shared catfish baits and cornbread recipes. Link Wray showed me how to believe in yourself when you play guitar, how to get lost in it, and cherish the moments when the crowd gets lost with you. 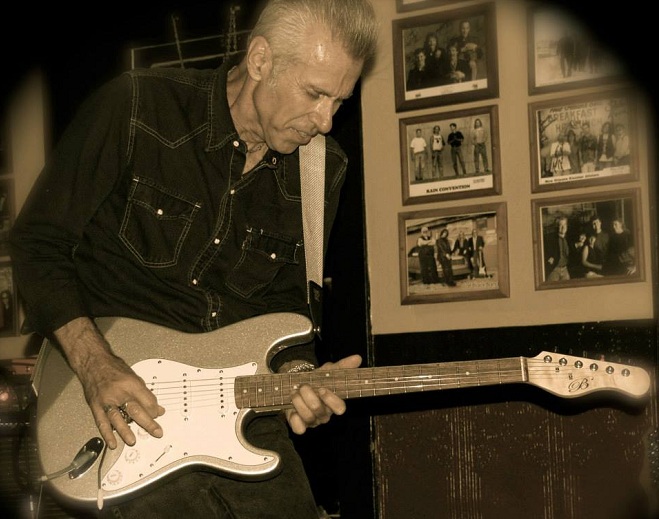 "Yes, I believe in rock n roll. I’ve been playing it, writing it, and recording it for over twenty five years. People still want to hear it."

From the musical point of view what are the differences between California and other local scenes?

California is hands down the toughest place to get a decent paying gig. Club owners are indifferent, the pay is archaic, and it’s where “pay to play” was invented.  That just about says it all.

I miss 35mm cameras and people just listening to concerts and performance without phones and computers in their hands. People went to concerts to listen and be inspired, not on their phones texting or talking to someone. I hope to keep playing and taking my music farther out into the world. I fear very little anymore.

Which memories from Dave Alvin and Jimmy Vaughn makes you smile?

Dave Alvin’s intensity when he plays is always inspiring. Jimmy Vaughn is a kind and gentle man and when he plays guitar he looks like he’s praying. I loved that about him.

What are the lines that connect the legacy of Blues with Swing and continue to Rock n’ Roll and Americana?

People keep music connected. Artists and music lovers are the conduit between different music styles. People create it, and people love it or they don’t, but it keeps it alive and healthy.

When we talk about Rock n’ Roll refers past moments. Do you believe in the existence of real Rock n’ Roll nowadays? 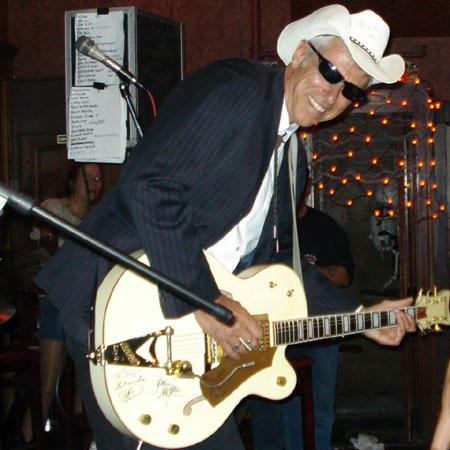 There’s a little café in a small town in France that was around about 100 years ago.  There was a woman that worked in that café that I would love to go back in time and spend a whole day with.