"Blues is definitely it's own identifiable music and it does have an artistic movement. There are always new blues artists showing up and that's a great thing. It's here to stay like Rock n Roll it will never die."

HEAD HONCHOS continues to creatively refine their Blues craft for a musically astute 21st Century audience. With the new release of BLUES ALLIANCE (2020), the group adds to the red-hot duo of Rocco Calipari Sr. and Rocco Calipari Jr. the skillful bass of Mike Boyle (Son Seals and Big Dog Mercer) as well as the world-class drumming of Will Wyatt (Bob Stroger, Mike Wheeler and Joann Parker). The term alliance is defined as: 'an association formed to advance a common cause'. With the Detroit-schooled musical acumen of Rocco Calipari Sr. leading the way, BLUES ALLIANCE reveals the 'common cause' to be a 'Blues for a New Century'! Make no mistake, the heart of the Blues is the foundation of the 11-track CD, but with an exhilarating infusion of a propulsive rhythm that is both cutting edge and irresistible. Beginning with the first track, 'Stuck Between the Middle', the listener is given an immediate 'heads-up'...this is NOT going to be a passive listening experience. No question, BLUES ALLIANCE calls for a joyfully active listening experience that veritably invites a musical alliance between the band and their fans! From 'Mr. Bad' and "She Got That Thang' to 'Evil' and 'We Will Win', the CD builds to a triumphant finish with the band's exceptional interpretation of the quintessential blues number 'I'm A Ram'.                                                      (Photo: Head Honchos) 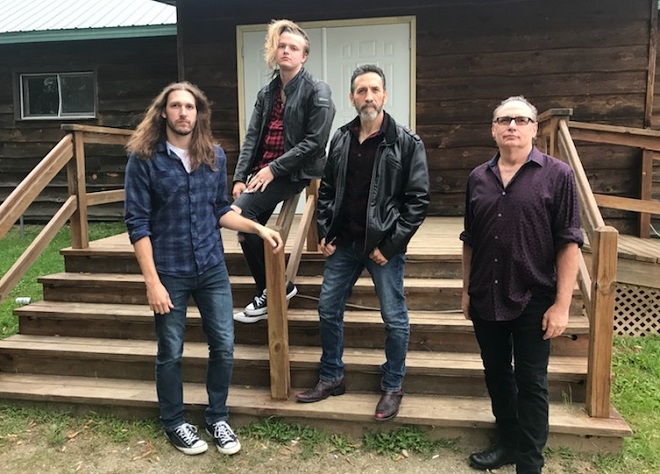 How do you describe "Blues Alliance" sound, music philosophy and songbook? Where does your creative drive come from?

Rocco Sr.: Our sound on Blues Alliance sounds very much like our live show. For this CD we played all of the songs at our shows to get them tight. When we went in to record, we played them with the same  energy and volume as the live show. You can hear that in the recording. We are a four-piece hard rockin blues-style band with elements of funk and Southern rock. We have a lot of dynamics with vocal harmonies and dueling lead guitars. All four members; Will Wyatt drums /vocals, Mike Boyle bass, Rocco Calipari Jr guitar and myself Rocco Sr guitar / lead vocals all share a lot of common influences in music. We have a wide age range in the band also, so our own personal taste finds its way into the songs as well. We play many original songs and covers ranging from Buddy Guy, BB King, Allman Brothers, Led Zeppelin, ZZ Top, SRV, Van Halen and more. We don't limit ourselves and play songs that we like and songs we think people would like to hear us play. We get our creativity from playing with one another. We have great musical chemistry and rehearse often, always writing new material and learning new songs.

Rocco Jr.: I came up with the main riff for Stuck Between The Middle when I was a teenager. The song sat on the shelf for years before becoming a Head Honchos song.

Are there any memories from Blues Alliance's album studio sessions which you’d like to share with us?

Rocco Sr.: The recording session was great. We recorded at our drummer Will's home studio in a very relaxed atmosphere. No pressure for time or money made it easy plus we were rehearsed very well. We get along great and are good friends, so it was a fun time. The last song on our CD is I'm a Ram by Al Green. It's our only acoustic track we recorded live with an overhead mic and direct guitar mics. Will over dubbed some percussion and we added the vocals. It was a different approach from electric.

Rocco Jr.: The song was inspired by my dad. He worked at ford motor company at the time but his passion was music. The songs is about being “stuck” at a job you don’t like and wanting to quit to pursue your dreams. 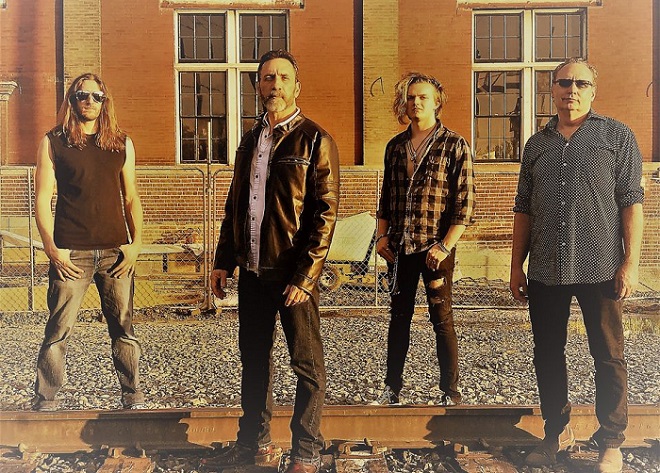 "For me the music comes first. I try to write songs where the groove will grab your attention right away. When I listen to music I like to be moved by the rhythm and I like the vocal melody to flow with the song. It's okay if people can't relate to the lyrics."  (Photo: Head Honchos)

Rocco Sr.: I would like to see The Blues get more recognition and popularity. You can find it in all forms of musical genres. Rock, Jazz, Pop, Funk, Soul, Metal, Country, you name it. The greatest Rock n Roll players all learned from blues players. I feel it is the most heartfelt and good time music. If you haven't been to a blues show I recommend you do. The live energy and the music is the best. I've been blessed to have played with some of my heroes like BB King, Buddy Guy, Luther Allison, Son Seals, Chuck Berry, Bo Diddley, Carl Weathersby and more. Their playing helped shape the way I play today.

Rocco Jr.: They’re currently no plans on making a music video at this time.

Are there any memories from Bo Diddley, Carl Weathersby, and Son Seals which you’d like to share with us?

Rocco Sr.: When I first moved to Indiana from Detroit around 1993, I met a harmonica player named Jo Jo Dotlich. He asked me if I had ever heard of Carl Weathersby and I had not. He invited me to come out and play a gig at the Holiday Inn with just him and Carl. No bass, no drums. At the time, I had never played a gig like that. I was really looking forward to it. When I met Carl, he was very cool and down to earth. When we started to play, I was blown away by the blues he was playing. I realized I had a lot of learning to do. I asked him many questions and we talked all night. He told me great stories about Albert and BB King and gave me great advice on playing the blues. I was in Bo Diddley and Chuck Berry's band for the 2001 Long Beach Blues Fest. One of the greatest shows of my life. Bo Diddley was really cool, brought us into his trailer, talked with us for a while and went over the set list. He told us to just be ourselves and don't hold back. Chuck Berry on the other hand wasn't too happy that he had to share a band with Bo Diddley and was going to refuse to play. Eventually, they talked him into it and we played. Johnny B. Goode is the first song I ever learned and also my favorite song. I couldn't believe I was actually playing it with Chuck himself. Our Bass player Mike Boyle played with Son Seals for many years and invited me to play at what turned out to be one of Son's last shows. It was at Kingston Mines in Chicago. It was an honor to play with Son. His album Live and Burning is some of the best blues guitar playing you will hear. 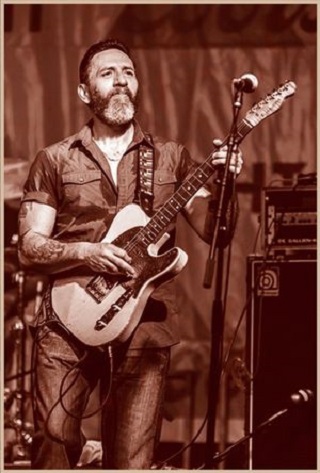 "I would like to see The Blues get more recognition and popularity. You can find it in all forms of musical genres. Rock, Jazz, Pop, Funk, Soul, Metal, Country, you name it. The greatest Rock n Roll players all learned from blues players. I feel it is the most heartfelt and good time music."

Rocco Sr.: For me the music comes first. I try to write songs where the groove will grab your attention right away. When I listen to music I like to be moved by the rhythm and I like the vocal melody to flow with the song. It's okay if people can't relate to the lyrics. Some songs are tongue and cheek, others about family, relationships, politics. I'm not trying to send a particular message; I just want the lyrics to fit the song. If you can relate that's cool if not that's okay also. The best part of writing is watching it all come together. Sometimes I will have a complete song and present it to the band other times we will work it out with everyone's input. It's playing with the band that really brings the songs to life. We listen to each other's ideas and work very well together.

Rocco Sr.: I would say it's all of the above. Blues is definitely it's own identifiable music and it does have an artistic movement. There are always new blues artists showing up and that's a great thing. It's here to stay like Rock n Roll it will never die. Everyone can relate to the blues good times, hard times, good and bad relationships. You can be feeling down, put on some blues and the music itself will make you smile. You can feel it.

What would you say characterizes Indiana blues scene in comparison to other US scenes and circuits?

Rocco Sr.: The Indiana blues scene is an extension of Chicago. I live less than an hour from Chicago and a lot of artists travel back and forth between the two states to play. Many players live in Indiana but work more in Chicago. When I first moved here from Detroit I heard about a place in Porter, Indiana called Leroys that had Blues. I would go there and see The Kinsey Report with Big Daddy Kinsey, Lonnie Brooks with Ronnie Baker Brooks, Willie Kent and the Gents, Savoy Brown and many others. It's still there and I play there a few times a year. I also book many Chicago acts at a venue in Valparaiso, Indiana called Elements. I have brought in Joanna Connor, John Primer, Howard & The White Boys, Big Dog Mercer, Ivy Ford and more. The Indiana blues scene is alive and well. 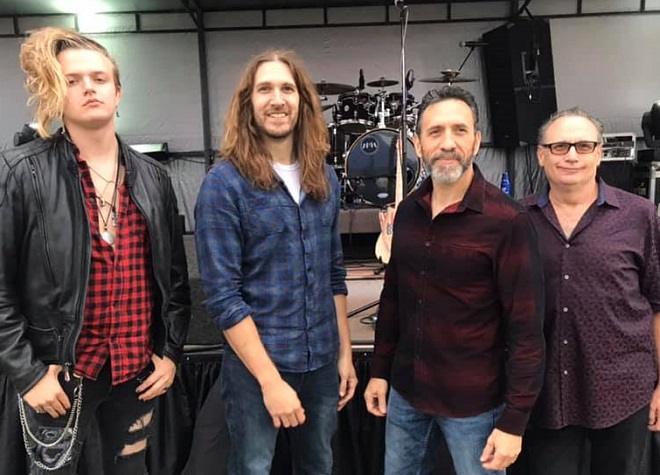