"The blues made me to learn to be more mature in life. Blues for me is not just the music but it was like a fuel that makes my life more living."

Kongko Bangun Pambudi was born on June 4th 1982 in Balikpapan (East Borneo), Indonesia. He moved to Jakarta in 1989. Much music influenced by his father, starting playing guitar since 4 years old. He has been organizing Blues events since 2003, such as: And Blues for All (2003), Tribute to Jimi Hendrix (2004), Jakarta Blues & Roots (2004), and Soul Shelter (2005). He was Road Manager/Technician on Gugun and the Bluesbug (previous name of Gugun Blues Shelter) from 2004 – 2008. Now, Kongko Bangun focuses on development of a Blues Community that he built since 2011, called BREAK TIME which has become the biggest and the most active blues community in Jakarta. Kongko is also an active bluesman with his band named Electric Cadillac since 2008 as Guitarist and vocalist. Based in Jakarta, Electric Cadillac has brought an energetic blend of sounds was combining a hybrid of blues, hard rock and psychedelic rock. Kongko's guitar and vocals are the factors responsible for the blues feel of the band while the psychedelic touch is brought in by Tju Sandy Hasan on keys, Enti Widodo on bass, and Meidian Syahputra's drumming style does definitely has a hint of jazz influence in it. They started the band in 2008 and have been creating ever since. Their debut album TAKE A RIDE featuring catchy yet rich blues tunes both in Bahasa Indonesia and English, with lyrics that are easy to relate to as they are mostly inspired by the ups and downs of daily life. Their new single and the whole album will be released soon titled "Dancing All The Way", with original tracks contents of Traditional Blues. Most will be based on Chicago 50's era even though the guitar or some songs will be influentialy by Blues Rock, it's more traditional and old school stuffs such as Boogie, Blues shuffle of Muddy, Buddy Guy, and BB King style. One can’t really argue the fact that these guys made a nice addition to the blues communities in Jakarta as well as other parts of Indonesia.

Made me to learn to be more mature in life. Blues for me is not just the music but it was like a fuel that makes my life more living.

How do you describe Electric Cadillac sound and songbook? What characterize your music philosophy?

Electric Cadillac's sound was characterized by a hybrid of blues, Chicago stuff mixed with hard rock, psychedelic rock and Texas tone killer. "Blues all the way" hahaha... I don't know how to describe it…coz all I know is just playing Blues, coz that's what makes me happy.

What were the reasons that you started the Blues Rock researches and experiments?

The Reason, because 1st me and my band grew up in that era (which is Blues Rock are dominated the Industry, such as: Jimi Hendrix, SRV and other stuffs), so that's why we still doing’ Blues Rock stuffs.

Well every part of my life is very important, coz I enjoy of each part and I learn it in every way. "Doing Blues Things, To Live as a human Being" (That's the way it supposed to be isn't it?) 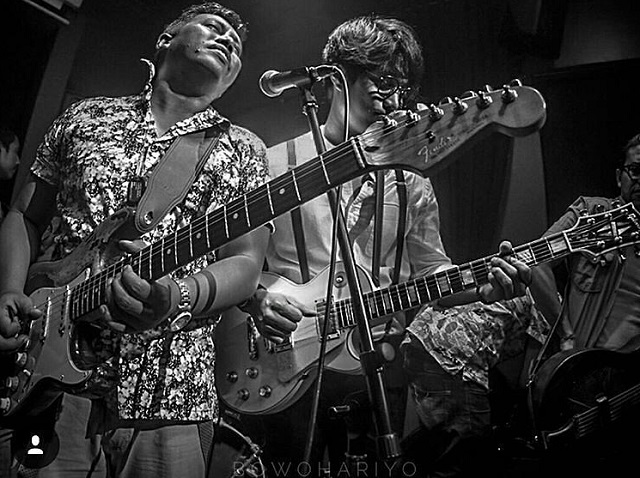 "Today is the most interesting period in local scene. Many Indonesian Blues musicians are being worldwide. Many Blues gigs and many Blues communities lives here... Blues no longer underestimated here."

Some time ago I had the opportunity to jam session with Marcos Coll (great harp player and very nice person), somehow he took a picture of my crew's T-shirt that I made and there is a picture of Charlie Musselwhite on the shirt. He secretly sends the image to Charlie Musslewhite himself and on the next day Charlie make a contact with me it such an honor to get connected with someone who I admired and now we're good friends.

How do you describe Dancing All The Way album's songbook and sound?

It sounds like from 50's era when BB King, Jerry Lee Lewis and other boogie and Chicago stuffs sounds from... but much more steroids (especially on Guitar sounds). It makes everybody who hear that song will be dancing. It's kinda mood booster.

Of course is skipping the bluesman when they are still alive (Robert Johnson, Jimi Hendrix, SRV, Albert Collins, Muddy Waters, etc.) although their songs are still remembered to this day. Hopes: No matter what, Blues is still rolling until the end of the day. Fears: musicians no longer assume the blues is the most important essence in music.

Make an account of the case of the blues in Indonesia. Which is the most interesting period in local scene?

TODAY is the most interesting period in local scene. Many Indonesian Blues musicians are being worldwide. Many Blues gigs and many Blues communities lives here. Nowadays, many media raised local Blues scenes. Blues no longer underestimated here. 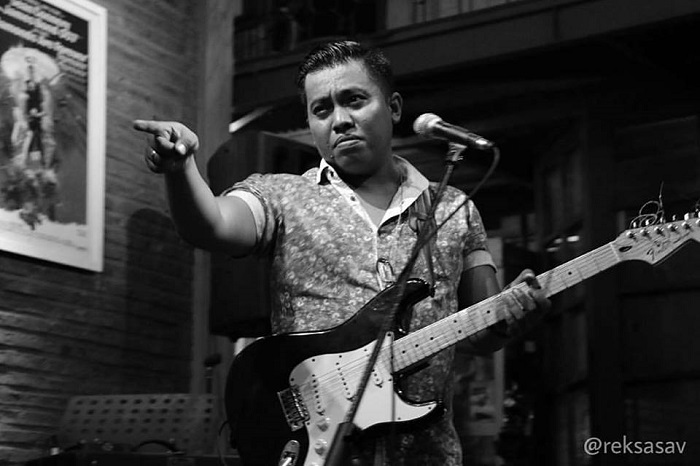 "Well every part of my life is very important, coz I enjoy of each part and I learn it in every way. "Doing Blues Things, To Live as a human Being" (That's the way it supposed to be isn't it?)"

How has the Blues and Rock influenced your views of the world and the journeys you’ve taken?

Well basically because Blues itself are dynamic music. It's the roots of every music... it's like mother or religion... and nowadays youngsters are much2 easier influenced by something that are rockin'... and once more we grew up from so much Rock stuffs, so that's why we put Blues Rock stuffs as one of our main "theme".

What is the Impact of Blues and Rock music and culture to the socio-cultural implications?

It's like from what I say from question number 4 that nowadays youngsters are much2 easier influenced by something that are rockin' (like Hendrix, SRV or Zeppelin). at least it's easier from them to receive Blues music and after that they will dive deeper what the real Blues is... and if some of them are musicians, it will make their music greater.

What are the lines that connect the legacy of Blues from United States and UK to Indonesia?

First a lot of our local music that has elements of pentatonic although slightly different for function and use, but basically pentatonic become a very important basis for our folk music, blues therefore very easy to receive and digest here. Besides, we have a historical background once colonized by some foreign nations, including: Dutch, English, etc., and they bring their culture here and it mixed up with our culture in other hand, Indonesia has a legendary band that was very influential in rock n roll world scene. It Called Tielman Brothers (you can check their video on youtube), at that time (early 50's) in Holland and around Europe this band is so famous there, the band inspired many musicians including Paul McCartney (The Beatles) and others. Therefore, Blues itself already has a long history in Indonesia.

Are there any similarities between the blues and the genres of local folk music, lyrics and forms?

Besides musicality highly correlated with the pentatonic as I mentioned in the previous question, the lyrics and his forms also have a strong correlation and similarities between the blues and folk music or the local music, such as: the use of various types of rhyme in his lyrics and forms such as poetry (Cross Rhyme A-B-A-B, Continues Rhyme A-A-A-A, Assonance Rhyme [repetition of vowel], etc.) 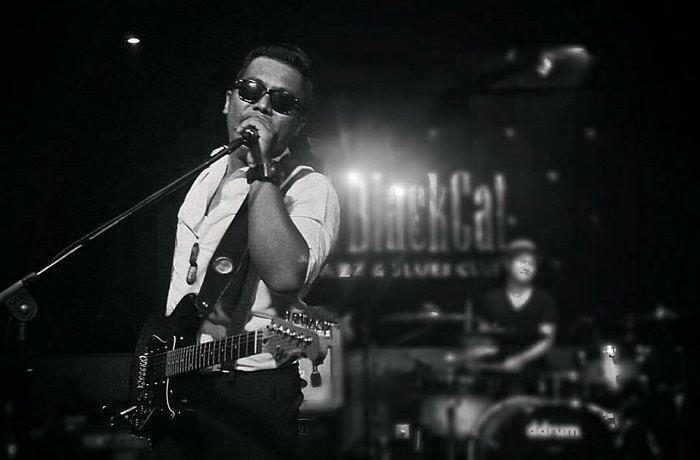 "The Reason, because 1st me and my band grew up in that era (which is Blues Rock are dominated the Industry, such as: Jimi Hendrix, SRV and other stuffs), so that's why we still doing’ Blues Rock stuffs."

A lot of music that does not educate or even do not have the quality is top of the music industry in Indonesia (this is what makes me laugh), otherwise a lot of music that is highly qualified but do not get a decent place in the local scene (this is what makes me touched emotionally). But the good news is the Indonesian people are now starting to smart and aware for sorting where good music, good quality, and have nutrition (also makes me touched emotionally)

I have 2 options. First is back in 1969 when WOODSTOCK hit the world (it is the day when music made revolution and change the world. I wanna be part of it). And the other one is being of witness of what happening on the "Crossroads" perhaps I’m waiting at the Crossroad waiting for Robert Johnson comin up and know what really happened!!! (He really makes a revolution / Giant Steps of what he doin on music, so I wanna be there too). 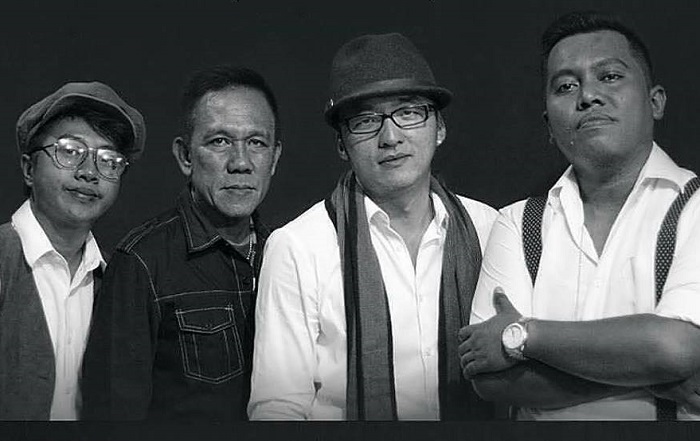