"Certainly love, experiencing the birth of my children, heartbreak and happiness, the kindness of others, drug and alcohol addiction, recovery and nature have triggered a lot of songs that I've written."

Eric Lambert has been pickin’ and grinnin’ his way into people’s hearts for over 40 years. Specializing in the fiery art of flatpicking, he has built a distinguished career writing, performing, recording, and teaching Americana music in and around Chicago, and beyond. Traces of rock, folk, bluegrass, and blues can be detected throughout his music, which is delivered with energy, soul, and inspiration. His voice, presence, and precision moves audiences to their feet, while his playful spirit and warm sense of joy makes them feel right at home. 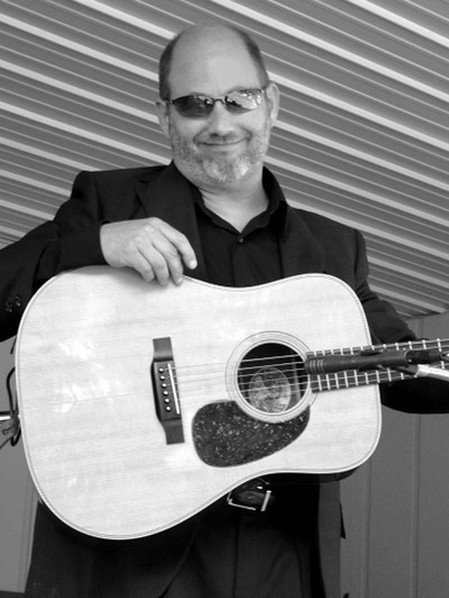 Eric’s music resonates the old school philosophy of the groundbreaking musicians who inspired him; music should know no boundaries. Influenced by Duane Allman and Dickey Betts at an early age, Eric discovered country and bluegrass music through the Nitty Gritty Dirt Band album, "Will the Circle Be Unbroken." Raised on Chicago's south side, he cites diverse influences as catalysts in shaping his unique roots music sound. His original voice was crafted by blending the bluegrass approaches of Tony Rice, Clarence White, and Norman Blake with those of his main influences such as B.B. King, Bob Dylan, Jerry Garcia, and Old & In The Way.

Eric excels at every style of music he performs, moving through them with an uncanny ease and smoothness. The richness of diversity in his influences is evident in his playing and throughout his vast career, which spans 10 countries as a solo artist and as a band member. Some career highlights include playing with Virgil Kane along with Alabama and George Strait, and being a front man in bands such as Big Shoulders, Heartsfield, Valerie Smith Band, and Henhouse Prowlers. His original music collection contains three solo albums, produced and released on his own label, Woodpicker Music. In 2012, Eric was awarded a position as an official TrueFire artist and educator, teaching guitar along side the world’s best musicians such as Frank Vignola, Robben Ford, and Larry Carlton. Eric launched a new project called Eric Lambert & Friends.

How do you describe Eric Lambert sound and progress, what characterize your music philosophy?

Well, we call our sound Rockin Americana String Band Music. We play traditional string band instruments like Guitar, Mandolin, Fiddle and Bass and play with the intensity of a rock band. We play with the drive of a bluegrass band and improvise like a jazz band. We've been influenced by all forms of American music, most notably bluegrass, country, folk, rock and jazz. My philosophy is to write great songs and provide plenty of opportunity for the great musicians I play with to improvise and jam. I just love to hear great musicians play their instruments. 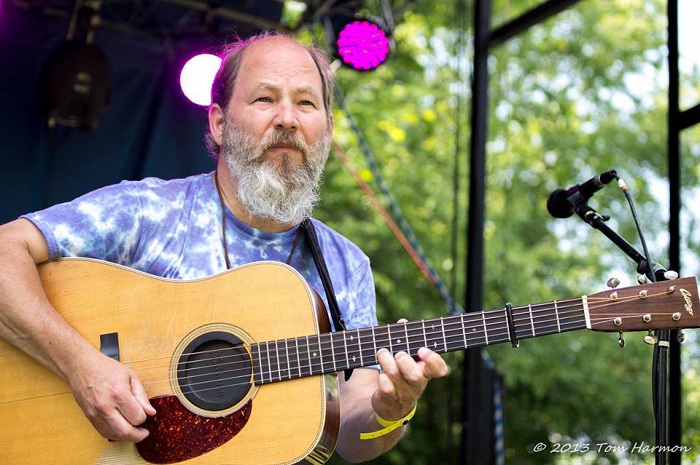 "I've found that a large percentage of the young people that I come into contact with are fans of Roots and Americana music. I believe it's the honesty of the music and the fact that it makes them feel. These young people are our future. They want real music."

I believe that all of my life experiences have triggered ideas for songs. Certainly love, experiencing the birth of my children, heartbreak and happiness, the kindness of others, drug and alcohol addiction, recovery and nature have triggered a lot of songs that I've written. Of course, affairs of the heart always inspire a tune.

The most interesting period of my life is right now! I'm happier than I've ever been, I'm playing my music almost entirely, my new CD is getting good reviews, and I'm doing interviews in Greece. The best moment of my career was the CD release concert we did October 26. It was a sold out show, the band was hot and the audience was wonderful. I've not had a worst moment of my career. I play the guitar and sing tunes, how bad can that get.

Why did you think that the Americana and Blues music continues to generate such a devoted following?

I think it's simple. The music is real and it is performed with heart and soul. It touches people, it makes people feel. The music is timeless. Will we ever forget Bill Monroe, Bob Dylan or Muddy Waters? I don't think so. These artists are real and their music is real. 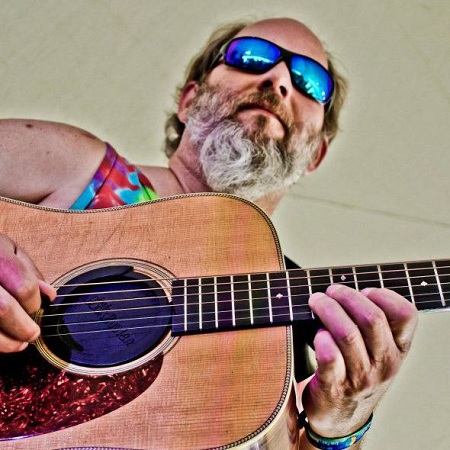 I've been fortunate to play many memorable gigs. What immediately comes to mind is walking out on stage at the Telluride Bluegrass Festival in Colorado. My first trip to Europe was amazing. We played a world music festival near Frankfurt Germany to thousands of people. Most recently I've been honored to play the John Hartford Memorial Festival at the Bill Monroe Music Park in Bean Blossom Indiana. I was involved in a super jam on the main stage with Vince Herman of Leftover Salmon, Jeff Austin of Yonder Mountain Stringband and many others. Backstage I was involved in a great jam with Jamie Hartford, Robert Bowlin and Wil Maring. Robert was Bill Monroe's last fiddler. These jams were very exciting! I'm smiling now just thinking about all of this.

Meeting Tony Rice, Sam Bush and Bela Fleck was very important to me. They are some of my heroes and they were all awesome down to earth guys. My favorite meeting was with David Nelson. It was backstage at a show in CA. We were the opener, New Riders was the headliner. I asked David about the Good Ol' Boys, an old time band he had been in with Garcia, and he just started talking. He talked about Garcia, and Clarence White and Bill Monroe and the experience was absolutely fascinating!

When I began to learn how to play the Blues I was with a band in Chicago called Big Shoulders. These guys were veterans of the genre and knew the blues inside and out. I was a younger man and I thought I was pretty good. They called me out and challenged me to dig deeper and play with more feeling. That's when I discovered that I could dig deeper and play with more feeling and it was an amazing experience. Playing the blues taught to become a more soulful player and how to swing and get nasty. It made me a better musician. I'm forever grateful to the fellas in Big Shoulders. What is the relation of new generation with bluegrass, folk and blues music?

I've found that a large percentage of the young people that I come into contact with are fans of Roots and Americana music. I believe it's the honesty of the music and the fact that it makes them feel. These young people are our future. They want real music.

What are the lines that connect the legacy of Blues with Folk and continue to country and bluegrass music?

Where would you like to go in a time machine for 24hrs?

I would like to spend a day in San Francisco 1967 hanging out in the 'Haight' with The Grateful Dead, The Jefferson Airplane, Janis Joplin and the other musicians who made San Francisco famous. What a glorious day that would be!

How you would spend a day with Bob Dylan? 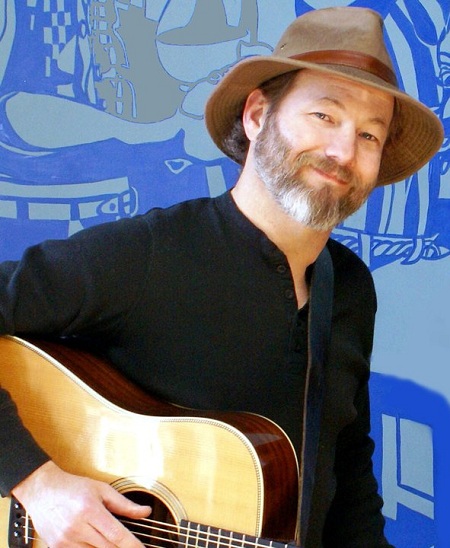 I think I'd like to go to the zoo with Dylan, have Pizza at Gino's East and spend the evening at the Green Mill listening to Sabertooth!

"My philosophy is to write great songs and provide plenty of opportunity for the great musicians I play with to improvise and jam. I just love to hear great musicians play their instruments."

Eric Lambert’s record, “Maiden Voyage,” (2013) features Steve Haberichter on mandolin, Pat Fiddle on fiddle, Dan Rogers on bass, and Eric Lambert on guitar, dobro, and lead vocals. It was recorded at Thunderclap Recording Studio and produced by John Carpenter and Eric Lambert. The album artwork was hand-drawn by Jon Griffin.

Eric Lambert is a progressive world of original flatpicking Americana music known for having little boundaries and much precision, excellence, and inspiration. Specializing in the fiery art of flatpicking, Eric Lambert has been writing, performing, recording, and teaching music in and around Chicago, IL and beyond for over 40 years. Join us on this exciting journey in person and online, and fill every day with a smile and sweet song.