Interview with Belgian bluesman Doghouse Sam - fresh and original sound, like the blues of the old era

"Blues is pretty hard headed music and that suits me perfect... I wanna make a fist in dealing my everyday problems."

Belgian vocalist, guitarist and blues-harp player extraordinaire, Wouter "Doghouse Sam" Celis, previously made his mark with the highly acclaimed Blues-band The Rhythm Bombs, with whom he played more than 500 gigs around Europe during the past few years. Now Doghouse Sam returns, backed by his Magnatones, he unleashes his debut album produced by Mischa den Haring of T-99 fame. "Buddha Blue", is an outstanding collection of pure and raw Blues, accurately reflecting the band’s high-energy live performances. An upright bass, drums and a hollow-body guitar, are this band’s tools of their trade. Instruments with which they scrape the music back to the bare essentials, playing their Blues pure and raw; hardly leaving meat on the bone. 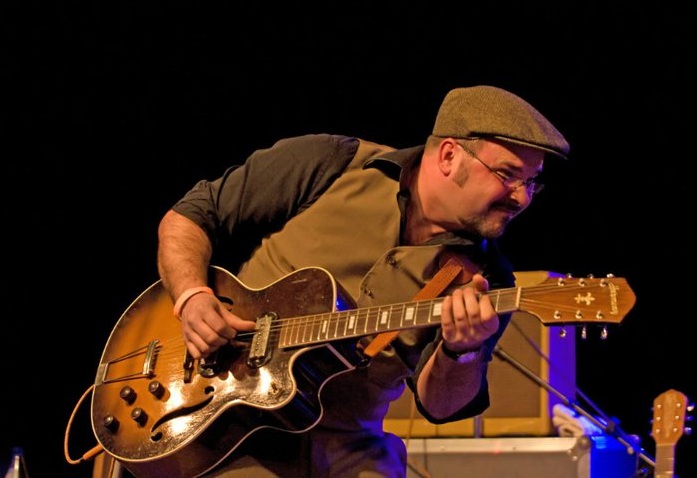 Sam; an aficionado of vintage hollow-body electric guitars, was originally influenced by players such as Rick Holmstrom, Junior Watson, Anders Lewén, Alex Schultz, Jonas Göransson, and Danny Kordelius – not exactly your typical household-guitarist names, but hey, by now you’ve caught on that Sam is a different kind of cat…huh…dog! Over time Sam has developed a playing-style very much his own now, and his wailing harmonica and distinctive voice furthermore confirm him as a talented multi–instrumentalist and Bluesman "pur-sang". And by the way - he writes all the band’s material: music and lyrics!

Before hooking up with his Magnatones, Wouter Celis a.k.a. Doghouse Sam had already established himself on the scene as a member of the acclaimed Blues outfit "The Rhythm Bombs", with whom he played over 500 gigs around Europe in just a few short years. Today Sam’s doghouse companions, the Magnatones, consist of Jack Fire on bass, and Frankie Gomez, recently voted best drummer in the Netherlands. Prophetic Mojo is part of the profound fiber of Doghouse Sam and his Magnatones, and they extract it from the depths of their soul; high-octane fuel powering their energetic performances each and every time they get on stage, whether it’s in a smoky club, or before an audience of thousands such as the Belgian Rhythm & Blues Festival – one of the largest festivals of the musical genre – where they practically debuted last year. Doghouse Sam & his Magnatones return with their second album, "Knock Knock" (October 2014).

For me blues is like a prayer, like a relief… to get things out of my system. To deal with my everyday problems and sorrows. It’s telling about my life through a song, through the guitar or harmonica... Actually it’s my life philosophy. Blues is pretty hard headed music and that suits me perfect… I wanna make a fist in dealing my everyday problems. 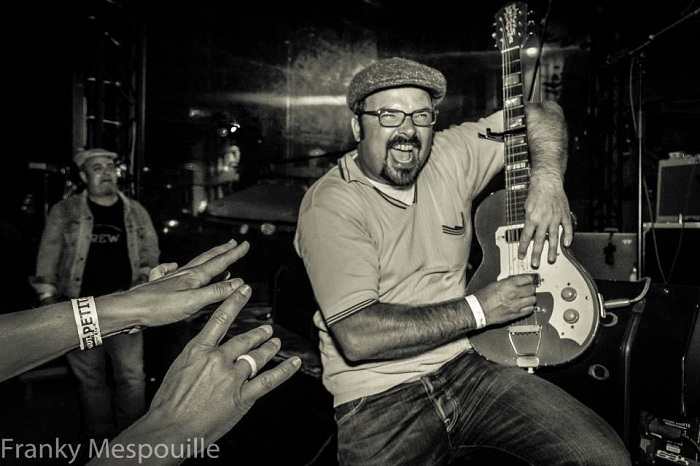 "I think American artist love to come over to Europe to play their music. They often tell me they get more appreciation here than in their home country. Everybody can have the blues and understands what’s it all about. Wether you’re an American or from Europe!!"     Photo by Franky Mespouille

How do you describe Doghouse Sam sound and songbook? What characterize your music philosophy?

It’s a raw rough-at-the-edges sound. It’s honest and straight from the gut… Doghouse Sam & his Magantones sound like the blues of the old era, but is fresh and original at the same time. At Least that’s what we try to do. We don’t wanna play a thousand notes per minute, instead we choose the notes very carefully and play more with phrasing and timing. That gives a fresh and original approach to the blues.

I write all the songs for the band and it’s always about my life as I experience it. But since I’m a pretty ‘closed’ guy who doesn’t like to tell a lot, all my lyrics are kept a bit mysterious. They’re not always obvious to understand, and actually anybody can give his own meaning to our songs. I like it like that!

Why did you think that the Blues & Rock n’ Roll music continues to generate such a devoted following?

It’s honest music for honest people. It’s a musical language that unifies a group of people who act and life the same. Everybody has problems and sorrows and the blues helps dealing with them.

In that way I don’t agree that the blues has to be sad music. Maybe the subject is, but the blues helps you feel better and move on. I guess a lot of people like that in the blues.

I saw Guy Forsyth play in 1994 and the way he sings his blues was astonishing… so much power and so convincing. I loved it and it triggered me to play the blues. For me actually the instrument came first. I liked harmonica a lot, and when I start lookin’ for music where this instrument was used, I got with the blues… and I kinda stayed there!!!! There are a lot of stories there of course…too many to tell. Maybe I’ll tell one rather funny story... This one night when we were drivin to the hotel after a gig, we didn’t find the way to the hotel. It was like 4 o’clock in the morning so there was nobody on the streets to ask for directions... And then we saw a small group of guys a bit further. We pulled over and I stepped outta the car to ask where to find the hotel. And only then I saw that these guys were actually breaking in /trespassing a store. And the funny thing is that nobody really knew how to react… we just stood there and said nothing. Then I stepped back and said we would find our way, jumped in the car and drove off like hell….

I miss a bit appreciation of the big audience sometimes…it’s only a small group of people who are interested in roots music and that’s too bad. Considering it’s the best music in the world and founding father of a lot of other musical genres.

But still it is good to see young people turning to the blues and starting playing it… everybody does it his own way and that’s good. For me personally I don’t like blues rock too much but I still respect people who play it like that. For me, I prefer to approach the music in another way: just pure, simple (not easy), raw craftsmanship!

Then I would change blues to the mainstream chosen music (instead of pop and techno …), so I could become rich with my blues music… 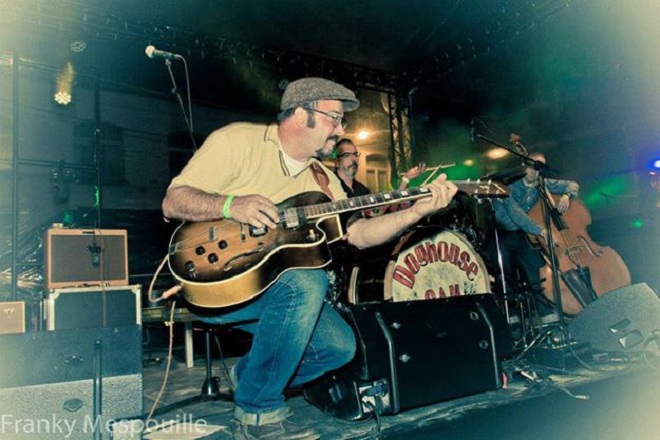 Make an account of the case of the blues in Belgium. Which is the most interesting period in local blues scene?

For me personally this band ‘Doghouse Sam & his Magantones’ is the most fun I ever did in 25 years. It is exactly the music I love and wanna play with fantastic musicians. I hope we can play and tour a lot with this band.

What are the lines that connect the legacy of Blues & Rock n’ Roll from States to Europe?

I think American artist love to come over to Europe to play their music. They often tell me they get more appreciation here than in their home country. Everybody can have the blues and understands what’s it all about. Wether you’re an American or from Europe!!

Do you know why the sound of harmonica and can-box guitar is connected to the blues? What are the secrets of?

The origin of the blues is that it was the “poor man’s music”. So these guys couldn’t afford expensive instruments, so they build their own. Or bought a small and cheap bluesharp. I’ll mail you in attachment the picture of my latest self-build hammer guitar. It is featured on the upcoming CD of Doghouse Sam in October 2014. 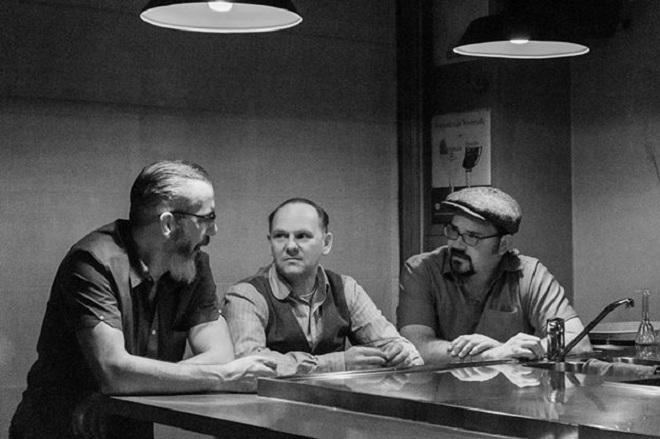