Interview with British musician Rosco Levee, he was brought up on a diet of Bluesy Country - Rock n’ Roll

"The Blues for me is a canvas. I can say more with a guitar and a good blues band than I could ever say with words. It allows me to express myself, and hopefully some people understand what I’m trying to say!"

Rosco Levee is a musician and producer who writes and produces with a Bluesy Country - Rock n’ Roll analog kinda sound from Kent, UK. Music and writing songs is in his blood; every day he composes a new song, a set of lyrics or a new melody to work with. Spurred on by his good friend, the notable singer songwriter Pete Molinari, Rosco has gone back to his roots where he was brought up on a diet of blues, country and rock ‘n’ roll. Artists such as Robert Johnson, Delaney Bramlett and Elvis, and bands such as Allman Brothers, Stones and The Band are all major influences. 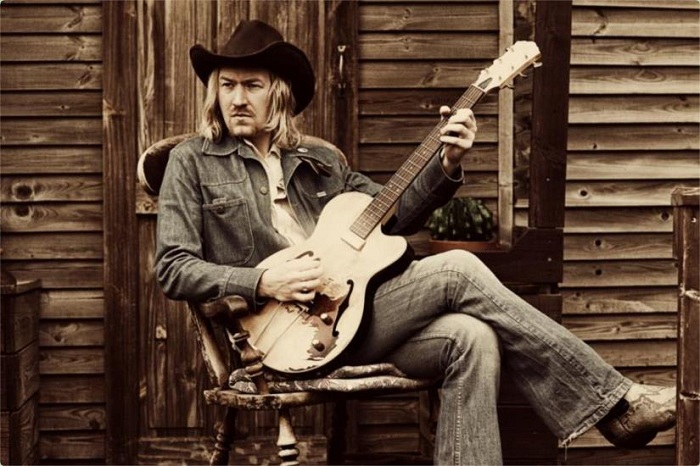 Rosco Levee & The Southern Slide formed in 2010 recording their true sound on reel to reel with their debut album "Final Approach to Home" which was released August 2011. The critically acclaimed album and high energy professional gigs, wowed audiences and critics alike and gave them an amazing 2012 playing live in the UK & Europe. 2013 was a monster with the diary choc-a-bloc with venues, festivals and tours as well as magazine features and reviews as the industry took notice of this great band!!

Off the back of the hugely positive critically acclaimed "Final Approach To Home" the song "GOLDRUSH" was nominated in 2013s British Blues Awards category for best original song, a great accolade for the band and Rosco for his skilled song writing. The band have been handpicked by mighty Classic Rock mag as one of the HOTTEST to watch in 2014 and the new album New album "Get It While You Can" (2014) is already being tipped as potentially best British Rock Album of the year.

Rosco, when was your first desire to become involved in the music and especial to Southern roots music?

Well I started playing guitar when I was about 5 yrs old, my father was in the Navy and had spent a lot of time in the states and brought back a great record collection, things like the Allman Bros and Stones, Little Feet and Funkadelic, Muddy Waters and Freddie King, these records would be played at home when I was growing up and that’s kinda how I learnt to play, by listening and playing along.

How do you describe Rosco Levee sound and progress, what characterize the Southern Slide philosophy?

The sound we play is like a gumbo melting pot of different ideas and sounds, I write what I hear in my head and the band contribute to making that sound real, we share some ideas around and sometimes jam things out…our live shows now are getting far more psychedelic with long jams and breakdown beats, we’re trying to push the boundaries’ all the time! 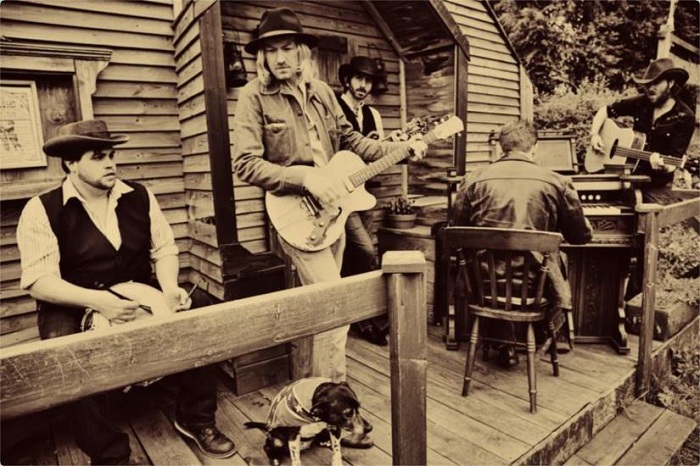 "Well although nowadays I find most of the modern British blues players tend to sound more like Jimi Hendrix and SRV using strats etc, there are still a few of us (myself included) that are more preaching the word of Clapton or Peter Green from the 60’s."

Breakups with girlfriends, losing loved ones, owing people money, general Blues everyone has in their life. For a long time I attracted and hung around with the wrong sort of people, and had a few dark times, but I used it and got a lot of material from it.

Why did you think that the Southern roots music continues to generate such a devoted following?

Because in this world of force-fed pop rubbish, where people sing to backing tracks and can’t even sing in tune half the time, don’t write their own material and generally are just record company cash cows to make money, Rock n' Roll is the only thing left that’s real….guitars, drums, people actually playing live, singing, jamming, writing songs, getting the blues and singing about it, that’s REAL.!..you can’t fake that stuff…people know when you’re faking

Hanging backstage with the late, great Alvin Lee from Ten Years After in Austria, we had a Jam backstage and a laugh. I also jammed with Ian Siegal when I was about 14yrs at a house party late one night, that was fun. But everytime I get on stage with the Southern Slide it’s great, we never know where the Jams are gonna take us. And they all make me smile and laugh. Music memories are the best sort. Meeting Alvin Lee was fantastic, he was a hero of mine, I used to watch him on a Woodstock VHS tape when I was growing up, trying to play like him, so when I met him and we had a Jam, it was great. He told me it’s a hard road, but just keep at it.!....and I have ever since.

"I’d love to go for a few with Freddie King, he’s my favourite of the Kings."

What do you miss most nowadays from the old days of Southern blues rock era of Capricorn and beyond?

Just the styles of music I guess, back then there seemed to be enough music for everyone to be happy, different styles, different people, nowadays it seems most of the world is just into the charts and what’s hip at the time. They are told what to like, it’s in magazines and kids shows, its changing how people see music, because it’s cheap, crap pop and shows like X-Factor are making kids think that’s how you get to be a singer or musician or famous. Don’t stay in and watch a talent contest on TV, go out and see something real, some live music!

What are your hopes and fears for the future of music? What mistakes would you wish to correct?

Stop watching crap like X-Factor and go out and see real music, live music, go and see a touring band, make the effort to support these people, it’s their jobs and the music industry is slowly succumbing to the fact most people use Spotify or illegally download their music, that is stealing and ultimately could stop artists making more!...CD’s and albums sales are becoming less and less each year and whilst the internet is great for promoting your music, sites like Spotify or anywhere that lets people rip music for free are a big mistake.

A friend recently had all this equipment stolen from his van, guitars and pedals, leads etc and the whole community got behind him sharing the missing items on Facebook and the thief gave back all the equipment, so it turned out well in the end! Social networking and musicians 1 – bad guy nil haha! 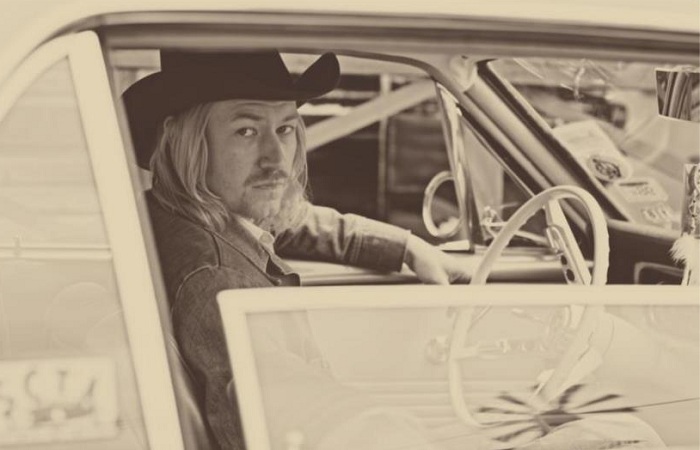 "Breakups with girlfriends, losing loved ones, owing people money, general Blues everyone has in their life. For a long time I attracted and hung around with the wrong sort of people, and had a few dark times, but I used it and got a lot of material from it."

What are the lines that connect the legacy of British Blues Boom of 60s with your generation?

Well although nowadays I find most of the modern British blues players tend to sound more like Jimi Hendrix and SRV using strats etc, there are still a few of us (myself included) that are more preaching the word of Clapton or Peter Green from the 60’s. The Beano album with Clapton on the front cover is how I really learnt to play. I learnt that album note for note that was my schooling into really playing the blues.

The Blues for me is a canvas. I can say more with a guitar and a good blues band than I could ever say with words. It allows me to express myself, and hopefully some people understand what I’m trying to say!

Why the sound of slide and resonator guitar is connected to the Southern music? What are the secrets of?

Well I think it probably just started with Robert Johnson and those other players, using a bit of bottleneck on the early recordings, the myth of the old players using old beer bottles and knives for slides, sitting on their wooden porches, the delta kinda music is used in old films and just is the sound of the south.. it’s great! 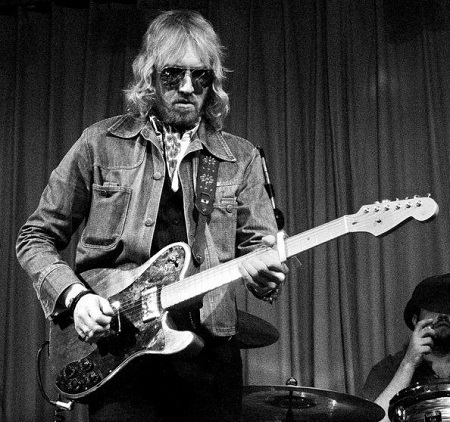 7th December 1969 The Fairfield Hall, in Croydon, South London, Eric Clapton plays with Delaney And Bonnie band including George Harrison. Just to be there and maybe sit in and have a jam, that would be a pretty perfect day.

Which of historical personalities would you like to booze?

I’d love to go for a few with Freddie King, he’s my favourite of the Kings.

If I could sit down with Delaney and have a chat, I’d ask him how he wrote, what were his influences, how he liked to record…I’d ask him so much.!