"The music I am exposed to today... I find lacks depth and heart. Like most of what's going in in the world... I fear the loss of human connection. Hopefully the Blues will take over for the empty music we are feed on commercial radio. People are hungry to feel and be moved."

In 1988, Montreal’s Angel Forrest began a musical career that would span over three decades… and counting. The energic vocalist’s work immediately gained attention from critics and new fans. Her tribute performances to the legendary Janis Joplin brought Angel into the public eye. The live performance was immortalized on her Angel Sings Janis Live album. Her first original album, Here For You, then sold over 30,000 copies and was followed by the other LPs, including Wonderland, her Christmas album, the award-winning album Come Alive, as well as Mother Tongue Blues, which won her the Lys Blues Album of the Year in Québec, was nominated for the Recording of the Year at the 2014 Maple Blues Awards where she also won Songwriter of the year. That same year, Angel recorded Live Love, her live acoustic album. In 2016, she released Angel’s 11, an original concept album with 11 of the best guitar players in the country. The album was such a success Angel went on to win Producer /Recording of the Year, Songwriter as well as Female Vocalist of the Year.                    (Angel Forrest, Canada 2022 / Photo by Dylan Sky) 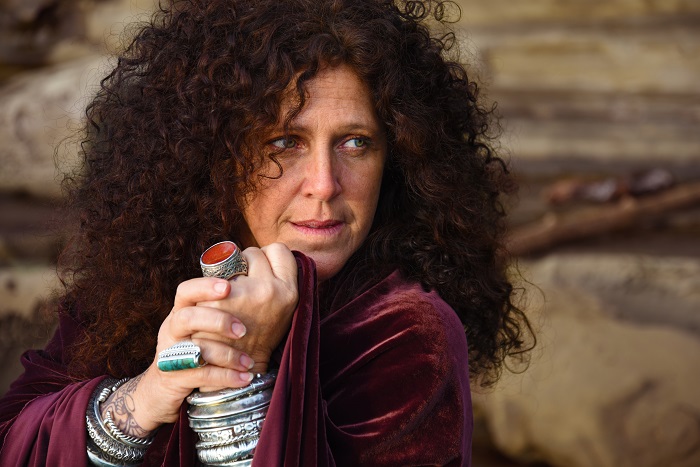 Her live opus, Electric Love, topped the charts around the world. The Montreal artist was named Female Vocalist of the Year seven times at the Maple Blues Awards between 2013 and 2021. The 2018 Memphis International Blues Challenge Finalist sings the whole country, blues, and rock spectrum. In November 2019, ready to hit the American market, Angel released the critically acclaimed album, Hell Bent with Grace was nominated for a JUNO award in 2021 for Blues Album of the Year. Forrest’s new release, Angel’s 11 vol. II (March 11, 2022) is another brilliant concept album, this time featuring 11 of her favorite vocalists.  It was a challenging feat to write 11 songs in duo form that fits the vocalist’s voice and style as well as words they can stand by and believe in. But it worked, in spite of the raging global pandemic. It’s a challenging time to record, with much of this new release being recorded virtually.

I have always been a 60's child ...born to late. I have much older siblings and have been raised listening to blues and late 60's and 70's music.  The influences from that time run deep. I time when expressing yourself fully was a good thing. I have always made music that is real to me at that moment in my life...whether it be blues, rock, country...or folk or in another language even. I am not one to kneel to pressure of any kind. So, my decision making is not always informed with what is expected of me. And that goes not only in music but life period.

I have a varied songbook... Blues is the way I express myself...because it's freeing and spiritual almost to me. No matter the style of record I make there is always that thread of blues through it all. Life is an incredible canvas of influences...

Well first off as a Woman who is a Mother and Wife, I have grown a lot. Dealing with the world in crisis as well as the norm... of Menopause, kids leaving the nest, loss of a parent and a lifetime career in jeopardy etc. My music has always reflected my experiences and life around me as I see it. I do find that as life goes on, I am less worried about the judgment of others... Doing what feels right and honest to me, in my music and in my life. The common thread of then and now is the truth and passion I feel in every song.                           (Photo: Angel Forrest with her husband Denis Columbus) 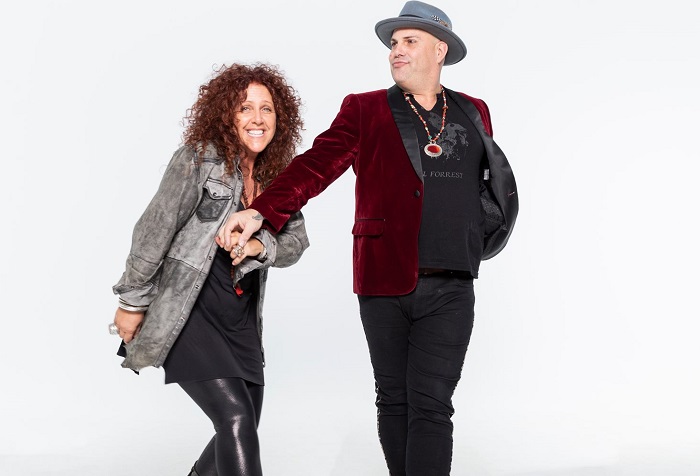 "I have always believed that the ones who make the decisions of who hears what and where...are frightened of music that stirs people up emotionally. Meanwhile those that don't buy into the pop culture are working very hard to keep blues music alive...and slowly but surely a younger generation of listeners is getting a taste of this freedom music...we just have to help nurture the next generation."

Where does your creative drive come from? How do you want the music to affect people?

Writing music has not always been my thing… My passion has always been live. But since my husband D. Columbus and I started writing together my creative world has blossomed. We understand each other and connect on a magical level that now has made writing a passion as well. I hope that people can find themselves in our songs...relate in a way that maybe heals or embraces... touches them in a positive way.

How do you describe "Angel’s 11 vol. II" sound and songbook? Do you have any stories about the making of the new album?

Angel's 11 Vol. ll is different to anything else I’ve ever done. It is a duet record...With eleven different singers all with their own particular style... I also had to put words in the mouths of other singers. For me it was very important that my guests believed and could stand proudly behind the lyrics...and of course that the song musically reflected their style. As well as for the listener to embrace the lyrical conversation between the singers without doubt. The result a record that is melody driven, one that caters to the singer and the song. Every song completely different to the last. For this reason, not really a record that can be categorized as any particular style. The songs definitely reflect the times we are living in. It was quite the challenge to record this record... we had half the artists recording virtually in real time whilst the others came in live to the studio. The restrictions made it interesting but very fulfilling once we had it all in the can. An unforgettable experience for sure.

After 32 years on the road and 11 albums ... you can be sure there are stories... but the same one repeats its self...and that is making music with friends and it taking us to a level of bliss fulness not found anywhere else.... 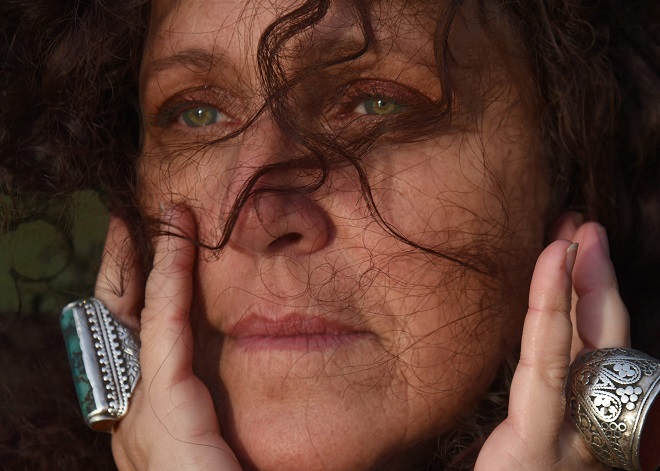 "I have a varied songbook... Blues is the way I express myself...because it's freeing and spiritual almost to me. No matter the style of record I make there is always that thread of blues through it all. Life is an incredible canvas of influences..." (Angel Forrest, Canada 2022 / Photo by Dylan Sky)

The music I am exposed to today...I find lacks depth and heart. Like most of what's going in in the world...I fear the loss of human connection. Hopefully the Blues will take over for the empty music we are feed on commercial radio. People are hungry to feel and be moved.

What touched (emotionally) you from the local Canadian blues scene? What characterize the sound of?

Canadian Blues has a very international sound... I love this blues society for it's diverse sound and the true camaraderie of the players... very supportive and respectful of each other.

I can't think about any of that...I'm not in it for the money or the fame etc. I'm in it because it fills me up... making music and performing live go hand in hand for me... the thought of losing one or the other is something I am not ready as of yet to deal with... I guess to recreate oneself... one must be creative... 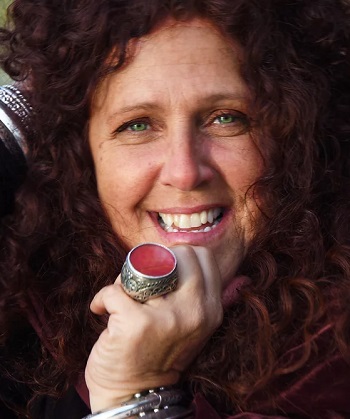 Always be true to yourself.

You cannot please everyone.

You can always be replaced.

Always be kind patient and respectful.

Sing every song like your life depended on it.

Love every minute of the creative process.

Be present in your heart and mind for every performance.

Realize how blessed you are to be doing what you love.

Respect and appreciate those people that support your music...they are the reason you can do what you love.

Never piss off your sound man.

I don't see nor feel a difference...we all kick ass!

What is the impact of Blues music to the socio-cultural implications? What is the legacy of Janis Joplin's music?

I have always believed that the ones who make the decisions of who hears what and where...are frightened of music that stirs people up emotionally. Meanwhile those that don't buy into the pop culture are working very hard to keep blues music alive...and slowly but surely a younger generation of listeners is getting a taste of this freedom music...we just have to help nurture the next generation.

Janis sang from her guts…her heart...she felt every note and sent it off to the listener to absorb. People are never forgotten when you have been touched emotionally by them.

Woodstock 1969... The last day when all the electric acts played...I am so influenced by the artists and their music...I would love to experience all the magic that day possessed! 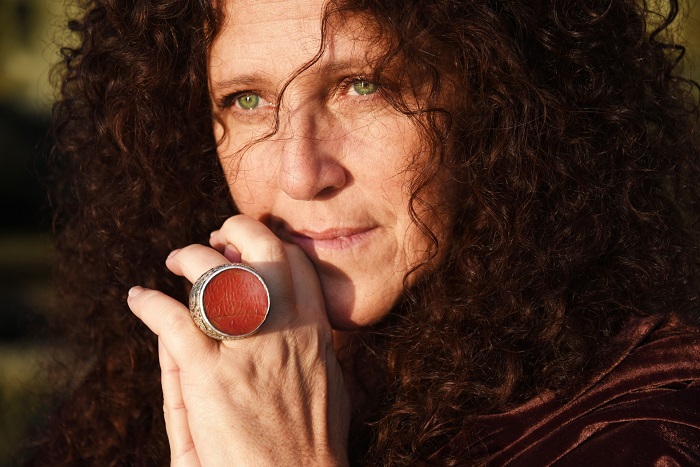