Life according to plan is not available for purchase. Who has not yet learned Michael van Merwyk might ask. The songwriter has experienced it; make the moments that life worth living, or even unfair. Before he showed up on the European blues scene, the man has just raised five children - with all that that entails. Well Michael van Merwyk has embarked on a new path now moves from the music to the center of his life. Together with music legends such as Jimmy Rogers, Larry Garner or Jimmy Johnson was jammed and celebrated. His style is unmistakable: self-taught and emotionally. His voice growls like a cross between Dr. John and Johnny Cash, his guitar playing is funky like Johnny Guitar Watson and rough as Albert King. Whether acoustic, electric or on the lap steel: it has strings, it is played. He regularly tours throughout Europe - from Finland to the Mediterranean coast, from the Atlantic coast to Moscow. With their brand new release New Road, Germany’s Michael van Merwyk & Bluesoul have asserted their position as one of the country’s finest blues bands. These four veteran players took home first prize at the German Blues Challenge, thus earning the right to compete head-to-head against national winners from 18 other countries at the European Blues Challenge 2012.

The focal point is frontman Michael van Merwyk. The guitarist, singer and songwriter has paid his dues on numerous tours and sessions and as house guitarist at the Roadhouse club in Rheda-Wiedenbrück, one of Germany’s most authentic blues locations. His encounters with international greats and local heroes have led to an ever deeper understanding of blues and roots music. Van Merwyk combines his talents as a guitarist and vocalist with those of his mates in Bluesoul to create a singular style. In honor of the late Clarence "Gatemouth" Brown, one of his musical heroes, he refers to this sound as "American Music – Euro Style."

What made you fall in love with the blues?

The Music hit me when I turned on the Radio about 30 years ago, tuned to a show called “Blues at Night” and Howlin Wolf howled “Smokestack Lightnin”.

From whom have you have learned the most secrets about it? 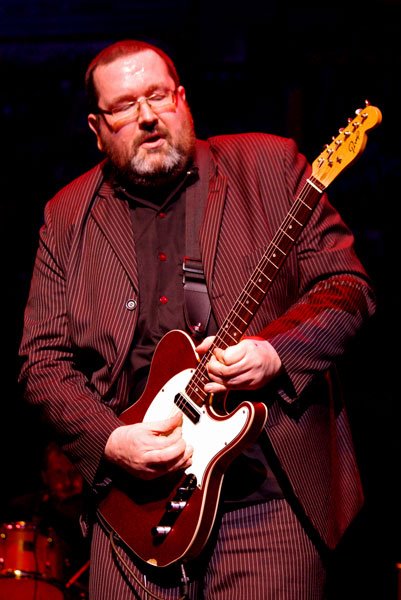 There are no secrets...you just have to move the Soul. Musicwise I learned a lot from local english Blues- and Folkplayers who lived in my area. That´s where my love for any kind of soulful music was founded. There is a whole lot of soul in Folk, Tango, Rempetiko, Flamenco and a lot of other music. Later I learned a lot in my favourite club in my hometown called “Roadhouse”, where I organized concerts by Jimmy Rogers, Kenny Neal, Lazy Lester, Joe Louis Walker, Holmes Brothers....almost everybody I liked during that period. I met Louisiana Red several times and we always talked a lot about slide playing. Syl Johnson taught me the same songs on guitar; he showed Magic Sam a long time ago...I got a lot of these stories.                 (Photo by Helge Nickel)

Well, the Blues has always been good to me...brought me to a lot of beautiful places and I met a lot of nice people during my travels. I found out, that I really love to travel and that I really love to communicate with people. It´s fun to touch and move people who don´t speak your language but can feel the music.

How do you describe Michael van Merwyk sound and progress, what characterize your music philosophy?

American Music – Euro Style....I sing songs about life and don´t think too much about a musical label like Blues, Soul or whatever...over the years I found great music all over the world. It´s a universal language...I like the derversity of music...on my ipod I got music by Howlin Wolf, John Martyn, Gabor Szabor, Black Sabbath, Lightnin Hopkins, Garifuna Collective, Mike Ness, Earl Hooker, Holmes Brothers, John Lee Hooker and hundreds of others. My musical philosophy...I don´t know...If it feels good, I like it.

The birth of my first grandchild, so there will probably be a lullaby on my next CD. The next gig and the last gig I had to cancel.

Why did you think that the Blues music continues to generate such a devoted following in Europe?

Probably because the people in Europe really dig culture and art...I don´t know.

Too many to name just one...I have nice memories of jams at private parties, where we ended up in the kitchen passing two guitars around and everybody had songs to sing until sunrise. One night at the Roadhouse, I jammed with Lazy Lester for almost two hours in the backstage room...playing country music exclusively. Over the years I had a lot of nice jams....I think my favourite one is the next one.

We had a great gig at a small club in Memphis in January, where we played to some locals and had a ball...and I recall a funny gig in Moscow with my friend Mikhail Missouris where Lazy Lester asked to sit in...oh, and another gig in Frankfurt, where I played lapsteel the whole evening and three ladies threw their bras on stage, cause they did not want me to stop playing....lol

Probably my meeting with my friend Gerry Spooner, a local musician who taught me a lot of songs over the years. We still play together, when we have the time...for almost 30 years. 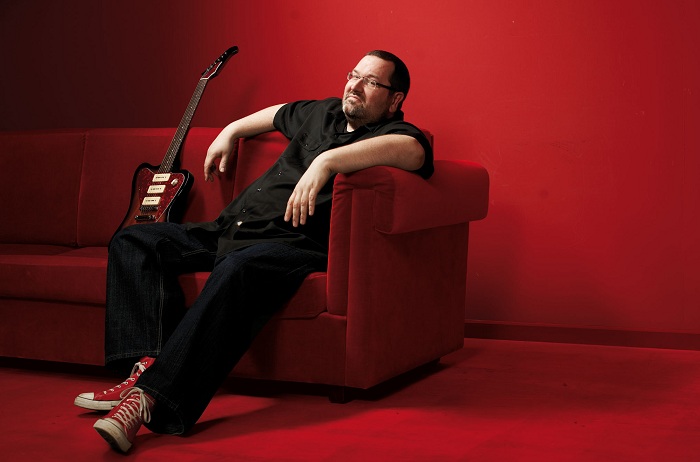 "I sing songs about life and don´t think too much about a musical label like Blues, Soul or whatever...over the years I found great music all over the world. It´s a universal language..."

What's been their experience from the US trip?

We had a Ball! The whole town full of Blues lovers from all over the world, great Barbecue and great music. What more can you ask for. Personally it felt real good that so many local music fans and listeners really loved my songs and wondered that a big guy from Germany can write these soul touching songs....that made me proud as hell.

What are the differences between European and American scene?

Well, the American scene has a longer tradition but to me, the Blues has become a universal language and every country has its own way of playing...a Bluesman from Chicago has a different sound then one from New Orleans, too. I like the fact, that the Blues is still a living culture full of creativity.

Well, invite me to dinner...here´s one: Larry Garner cooked a big pot of Gumbo for my 40th birthday for about 150 people  and at three in the morning we found the keyboard player cleaning the pot with bread because it was soooo good. 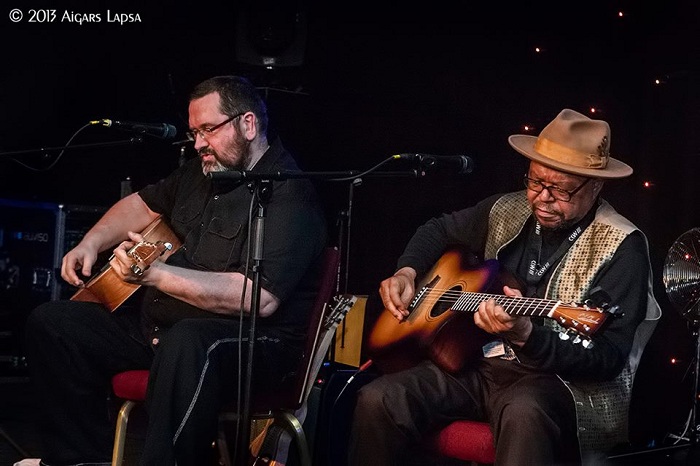 "The Blues has always been good to me...brought me to a lot of beautiful places and I met a lot of nice people during my travels." (Michael and Larry Garner, photo by Aigars Lapsa)

Tons of them...invite me to dinner and I share them with you.

Good songs and good stories...there is often too much guitar in so called Blues playing these days.

Good songs and good stories...we´re working on it...hahaha. I think the Blues is doing well these days, could always be better, but let´s hope for good days ahead and keep working.

Make an account of the case of the blues in Germany.

We got a lot of young Blues players coming up, so it stays creative and interesting.

Which is the most interesting period in local blues scene? 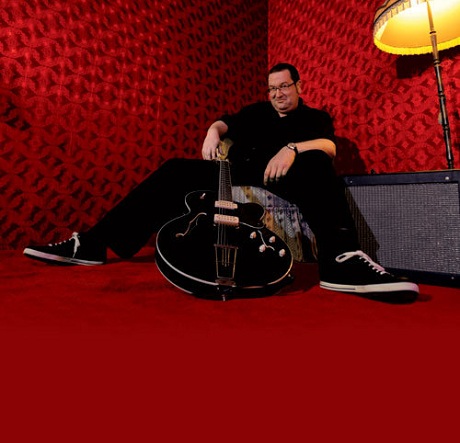 Why the slide is connected to the blues?

Because it can sing and talk, no limitation of frets on the guitar neck.

You are also a lap slide and cigar- box guitarist. What are the secrets of?

No secrets, just fun! I like fooling around on a one-string Diddley Bow cause there is no place to hide...one string, a story and a song.

Well, I like the times I’m living in, but if it is for music I think I would choose a day of a Festival where I could listen to guys like Tampa Red, Lonnie Johnson, Son House, Big Joe Williams, Blind Lemon Jefferson, Charley Patton, Magic Sam, Hank Williams, Merle Travis, Joseph Spence, Derroll Adams...I think that would take more than a day.

Thanks for your interest, hope to visit your country one day!