"I immediately felt what only the soul knows; that 12 bars are enough to make love, life and death arrange in a game of pleasure that aims in revealing the inner path to a man's soul."

Jazza SLam: The Liberation of Mind

During the '80s, Jazza SLam (Savvas Lampridis, guitar) and Spiros Mitrou (guitar) formed a group named “Big Bourbon Blues Band” in Aridea, Pella in Greece. Their music had a standard “blues” sound often leading to the edge of Funk and Soul. In 2005, they recorded their first album “Big Bourbon Blues Band”, an independent production under the label of “WolfMouth Productions”, that held very good reviews in relevant and well known magazines. Many musicians have worked with the band all these years and each one has made a significant contribution. The members of the band were usually five, whil Jazza SLam always was the frontman. Compositions and remakes of songs were made by Jazza and Spiros Mitrou and really were substantive. After Spiros left the band, Jazza SLam started working with new forms and experimented with new musicians. In 2008, the trip of the “Nu Urban Blues” project began when Ioannis Chrisochoidis (Tuba) joined the band and contributed with his special style of playing that formed the final result. Since then, the project has been presented in many different places in Greece and has been performed in various ways and with different artists.

I discovered the blues as a youngster trying to learn about Rock 'n' Roll. My first album was “I'm ready” by Muddy Waters. I immediately felt what only the soul knows; that 12 bars are enough to make love, life and death arrange in a game of pleasure that aims in revealing the inner path to a man's soul. There is a timeless link with another world where sadness, inequity and loneliness can be a vehicle to emancipation and liberation.

What has been the relationship between music and visual in your life and inspiration?

Music played a determinant role in my life. It's an integral part of my nature. I play, experiment and listen to music with an artistic purpose. I've never looked at it as a cult or style. My inspiration comes from everything around me as if everything conceals music within. I feel like I am the one that patiently tries to decrypt it and then release it to the world. 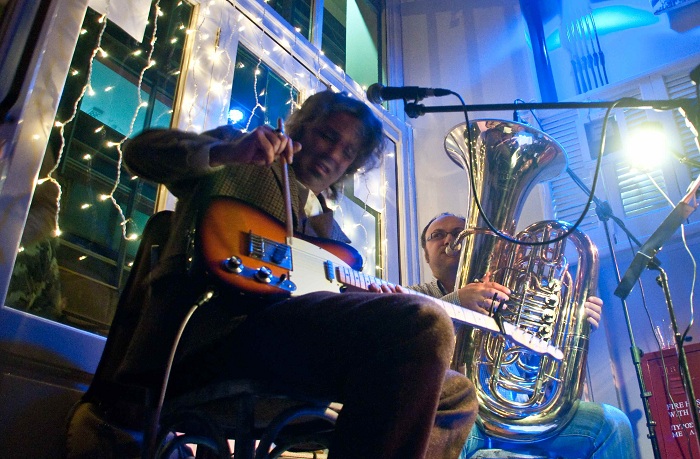 "One of the most important factors that lead to the implementation of “Nu Urban Blues” was globalization, which is based on profit and not liberation of humanity."

How do you describe "Nu Urban Blues" sound and progress, what characterize Jazza SLam philosophy?

The Nu Urban Blues project contains a concentrated history of chaotic consumption, human exploitation and loathsome ignorance about our planet through the recompilation of Afro-American blues songs and my own productions. All of these lead to the solidification of time and the ability to touch the dreams, visions and revolutions that finally resulted to a violent, self-destructive explosion of cannibalism!

What experiences in your life have triggered your ideas for "Nu Urban Blues" covers and videos most frequently?

One of the most important factors that lead to the implementation of “Nu Urban Blues” was globalization, which is based on profit and not liberation of humanity. Every time that money flows to the markets a piece of freedom is being stolen from society. My music and track selection are a magnifying glass that expresses the modern condition of slavery in the global, postmodern and urban “cotton-plantations”, with millions of delighted slaves that lose their freedom by becoming consumers.

What is the relation between art and activism? How can the art to crash the shackles of the human spirit and mind?

Since it is being written to be shared with other people, music is strongly associated with action, which instantly creates reflexes with political expressions. That's why art, revolution and social change always go together.

Music is the only way to lift one off the ground by encouraging him to overcome his biological boundaries and be part of the divine universe. If we remove art from the human nature it will result in a worthless life. However, I would like to separate art from the commercial product that is being promoted and presented as “art” by the perverted industry that aims to get the most out of the creators and make profit. 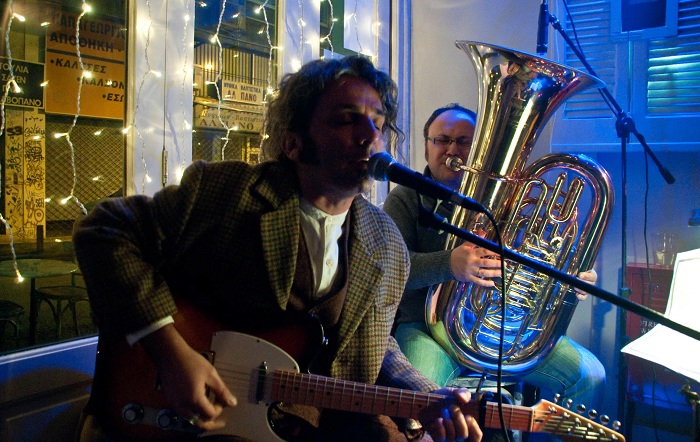 "Everything is Blues! If the music industry didn't have the need to sell other genres everything would have been in a track of evolution and exploration."

Why did you think that the Blues and Avant-garde culture and satire continues to generate such a devoted following?

I believe that against a nonproductive mentality that wants it to be grounded the Blues shouldn't be reproduced using the “copy-paste” method. Wasn't Robert Johnson “avant-garde” for his time?

We know that if people aren't supplied with energy, they become inactive just like every creature and object in the universe. This inactivity has a pleasant and intense sense like self-destruction, but it's a delusion that leads one to conservation. It's a recipe that is being used by those who want to control society and its evolution. They fear everything that is new, because it provokes thinking and therefore causes reaction.

Thus, it's very easy to make a main-stream, commercial sound by putting John Coltrane on a cup of coffee and playing his music in the elevators, in order to make a static and harmless Blues sound.

Because the Blues isn't just an expression that comes from the years of slavery, it's a shout of social awakening. Therefore, as long as it tries to express the new class consciousness it will be fought back. But, if it remains a kind of a “traditional” and “harmless” circus, then it will even win a Grammy!

Truly spending our time in the studio was so intense, because every step was a step to the unknown that needed to be explored. Many times we got into deep water, but eventually we survived.

Make an account of the case of the Blues Rock scene in Greece. What mistake of local scene you want to correct? You know there is a big problem in Greece! Most of the time the audience is absorbed by the image and therefore misses the point. I don't think that there was a Blues Rock scene in Greece simply because everything that was happening was an imitating attempt that didn't go any further. Besides, our mothers weren't slaves in the South but in our houses! And our fathers were frightened by foreign “authori-tyrants”! That's the reason why we never wanted to write or say anything. For Greece, the Blues and Rock is simply a sensational encounter.

I don't miss anything from the past; I lived it and enjoyed it. Now I step on the ground focusing on now and how to face the future. My life is restless! You can't expect anything from music, since music is ruling the game. It's like a woman in a relationship: “she lets you think you have captured her, but in reality she chooses you”.

Unfortunately, with everything that is happening lately in Greece, my laughter is more reflexive rather than emotional.

Everything is Blues! If the music industry didn't have the need to sell other genres everything would have been in a track of evolution and exploration. From Robert Johnson to Miles Davis and WAR the Blues is a circuit of pure energy!

In your opinion what was the reasons that made the Blues music to be the center of the political and social conquests?

I think that I answered that in the first question by saying that 12 bars are enough to make love, life and death arrange in a game of pleasure that aims in revealing the inner path to a man's soul. 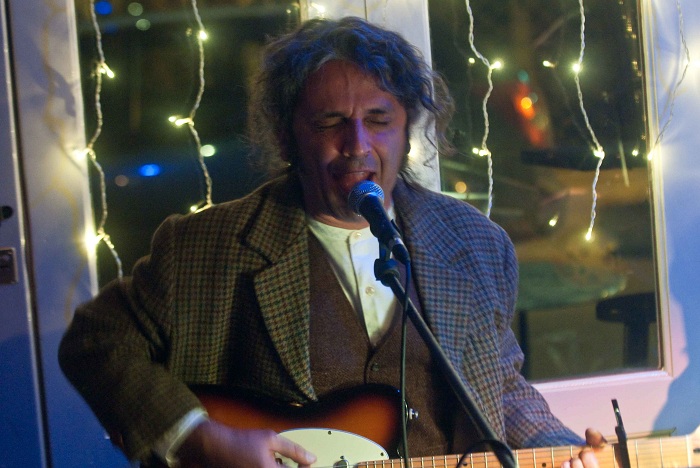 "Music is the only way to lift one off the ground by encouraging him to overcome his biological boundaries and be part of the divine universe."

I would like to ask him to play together the “Don't eat the yellow snow”. The lyrics have the most original “blues” sound that a white man wrote. Please let me refer to them for those who haven't heard them.

Dreamed I was an Eskimo
Frozen wind began to blow
Under my boots and around my toes
The frost that bit the ground below
It was a hundred degrees below zero...

I would ask Screaming Jay to put up an “Aristophanes Blues” performance together in Epidavros.

I would simply thank Che.