"Sociocultural but also political aspects come out of the way that music and poetry influence the listener-reader. To make the long story short, through the human transmitter or receiver the information is exploited and then transmitted into his everyday life."

Christos Yermenoglou started his music studies in Greece, studying byzantine music and drumset. He continued in the U.S.A. where he studied drums, classical percussion, latin percussion and jazz. He taught at the University of Nevada Early Childhood Music Program. He is founder and teacher in the Baby Artist: Program for the Musical Development of Infants, Toodlers, and Preschoolers, which operates in Thessaloniki since 2001, and is currently under the auspices of the University of Macedonia, in Thessaloniki. He has been an instructor of drums in lifelong learning programs for educators at the University of Macedonia. 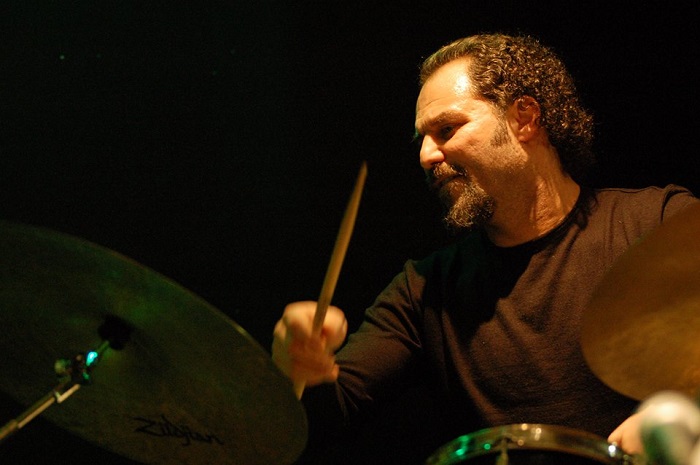 Since 2001, he is teaching drums in public and private conservatories and other educational settings. He has recorded music for theatrical plays and participates in improvisatory projects including music, painting, movement, poetry and drama. He has collaborated with the Thessaloniki State Symphony Orchestra and the Symphony Orchestra of the Municipality of Thessaloniki. He has participated in international music festivals in Greece and abroad and has extensive personal discography, as well as numerous participations in disc productions by artists from Greece and other countries.

Blues and eventually jazz music, because of their history and their interaction with various music traditions, cannot but affect a musician. Blues and jazz were the main reason for me to travel and communicate through this language. However, the journeys of my mind, as I listened to this music, were much longer and probably more important, and played a significant role in my musical development as well as my broader view of the world.

What were the reasons that you started the early childhood music program for infants, toddlers, preschoolers?

The basic triggering factor was my wife and her occupation with music education. Suddenly a new world was revealed to me and started being decoded, a world that I could sometimes feel by necessity but could not see or understand till then. Twenty years later my passion for discovery still goes on.

What do you learn about yourself from the kinds? What characterize the philosophy and mission of BABY ARTIST?

What you gain by working with children is that it teaches you all the important things which you may still remember, but play a secondary role in your life as an adult; Inquiry, exploration, concern for others, innocence, altruism, acceptance, encouragement and many more.

Of course, I study the way children play music, but this is a different huge musical chapter of my life. 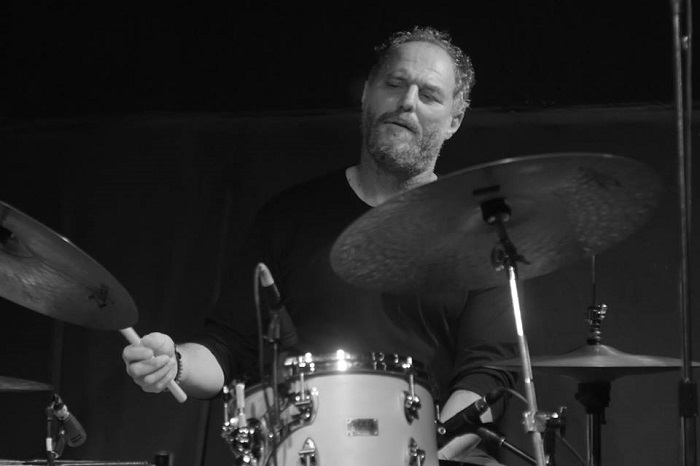 "Blues and eventually jazz music, because of their history and their interaction with various music traditions, cannot but affect a musician. Blues and jazz were the main reason for me to travel and communicate through this language." (Photo by Tasos Anastasopoulos)

How did the thought of “Blue Black Blues” start?

My thougts on starting up my own projecs, have started many years also. These thoughts needed to find a common pacing with my experiences so that they could really mature, be able to stand on their own, and have some meaning that would pass the test of my own criticism. At the time that the ‘Blue Black Blues’ started, the combination of my spiritual quest and personal experiences wanted to be expressed. These in turn, woke up the necessity that gradually gave birth to the will of mine. I felt that this moment was the right moment to create this work. Of course, there had been other previous musical works.

How does music and poetry affect your mood and inspiration?

I believe that words as well as music and arts in general are internally connected with my very own existence, my psyche, the way I communicate and view the world. Therefore, music and poetry obviously affect me, pushing me towards different directions (fortunately) depending on the music, the poetry and the written words of mine at several moments.

What are the lines that connect: Poetry & Music?

The two of them are very naturally connected. Words are sounds and sound is word. Words and music are inextricably related. Many times, I like to use phrases such as ‘poetic music’ or ‘musical speech’ in order to describe this exact relationship.

What does “improvisation”, “words & notes” mean to you?

They mean responsibility. Throughout the years, the term ‘improvisation’ has been questioned, and sometimes not unfairly. The improviser many times repeats himself. HE CONCIDES WITH HIS MUSCLE MEMORY (words, notes). This is not bad. But limiting the muscle repertoire which he has memorized and the lack of reason (why he is doing everything he is doing) keep him static. And this is the dangerous thing. 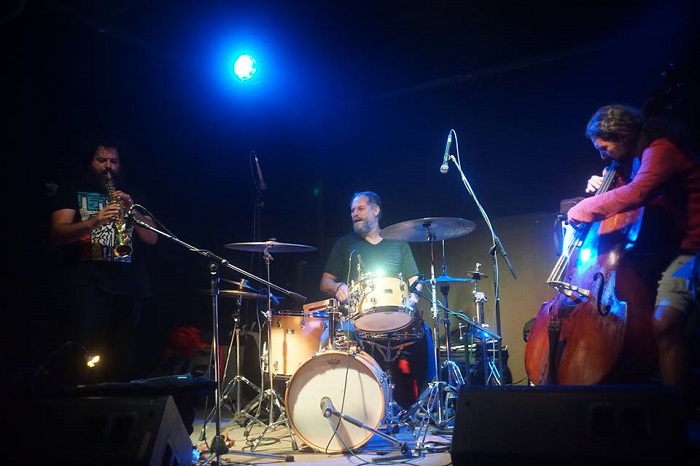 "The two of them are very naturally connected. Words are sounds and sound is word. Words and music are inextricably related. Many times, I like to use phrases such as ‘poetic music’ or ‘musical speech’ in order to describe this exact relationship." (Photo by Tasos Anastasopoulos)

Art Ensemble of Chicago has been and still is one of my most favorite music groups. I grew up with them and I was raised with them musically. Their vinyl records and CDs were melting in my sound systems from playing them over and over again.

One time I went to Chicago to visit a friend of mine who lived there and check out the jazz and improvised music scene of the city, and also make some performances as guest. One of my favorite places was ‘Velvet Lounge’, the owner of which was Fred Anderson, a nice person and saxophone player. I spent many nights there drinking and listening to music. I had the pleasure to participate in some of the jam sessions organized there on some Sundays.

One evening I headed to the bar because, if I remember well, Don Moye (the drummer of the Art Ensemble of Chicago) was performing there that night in a trio or quartet. I opened the door, entered the bar and realized that nobody was there except from Fred Anderson who was standing behind the bar. I was surprised. I tried to understand what was going on, because I knew I was late and the gig should have started already by the time I got there. A rapid thought crossed my mind that I might have gone to the bar on the wrong day. Fred Anderson realized my confusion and he noded to me inviting me to go to the bar where he was standing, at the right side of the entrance. I asked him what was going on, what happened to all the people that were supposed to be there, what happened to the band. He looked at me for a while and then he told me that Lester Bowie (the trumpet player and co-founder of the Art Ensemble of Chicago) had died and everybody had gone to the funeral. I stayed there with my arms crossed on the bar. I do not know how long did I stay in that position. I was not thinking of anything. I asked Fred to serve me a glass of whiskey. I do not remember if there were other customers in the bar, or how much I stayed there, what time I left and how. Neither do I remember whether it was Fred or me who started the discussion. What I remember is Fred telling me music stories about the Art Ensemble of Chicago, for the history of the city, and for other musicians. Only one thought was passing through my mind over and over; “Is it possible that such people can actually die?”

I do not miss something, and I am not at all afraid of what the future of music will be. Music is a living organism, it is energy that is materialized and vibrates through people and through nature – the universe. Music will find the way to exist and progress. 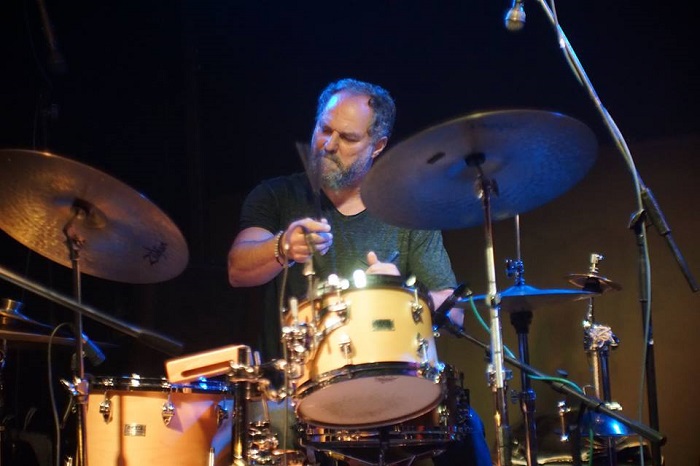 "What you gain by working with children is that it teaches you all the important things which you may still remember, but play a secondary role in your life as an adult; Inquiry, exploration, concern for others, innocence, altruism, acceptance, encouragement and many more." (Photo by Tasos Anastasopoulos)

I would not change anything. I might add a few things on education maybe, so that the person-musician is not afraid. This fear is what restricts and many times prevents the spiritual and emotional progress of man. And eventually, his musicality.

Make an account of the case of the Blues/Jazz in Greece. What touched (emotionally) you from the local circuits?

I would like to believe that there is a stable situation in what goes on musically, especially if somebody considers the circumstances people are faced with today. There are many distinguished music groups and musicians who try to play music, to find the appropriate places for performing, and even organize the events. And of course, there are the people who love music, by being the audience to it, and through their presence in the live performances or through the media, support these efforts.

What is the impact of the Blues and Jazz music on literature/poetry, and what is on the socio-cultural implications?

From a musicological side of view, pauses, dynamics, accents, links, rhythm etc., exist in poetry as well as in all the other arts. From a philological side of view, I would like to give a recent example. I hold in my hands the most recent book of Sakis Papadimitriou (Saikspirikon Publications), one of the books which actually talk about this exact influence of jazz, blues, improvised music and music in general on poetry and literature.

Sociocultural but also political aspects come out of the way that music and poetry influence the listener-reader. To make the long story short, through the human transmitter or receiver the information is exploited and then transmitted into his everyday life.

Ha ha ha. I have taken many journeys like that. I have met and made a lot of friends all these years in my journeys. But I never stay just for one day in my stops. I usually stay for 2 or 3 years every time. Maybe more. According, of course, to how time is measured at each one of these places. Now my obligations here for some time do not allow me to go away. Please, go on without me and we may get together in the same places. Who knows... 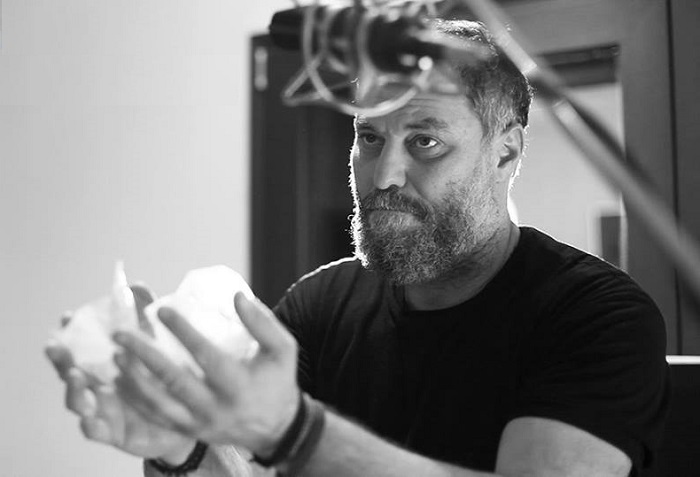