"When I’m playing blues or blues based music there is a zone like no other - where nothing else matters and time doesn’t exist. Blues means freedom to me."

A rare performer in any day or age, Becky Barksdale embodies in one individual the vast Texas blues guitar tradition of a Freddie King, the flirtatious sensuality and assertive independence of a Bessie Smith and the raw passionate vocals of a Janis Joplin. Her biggest influences were all of the other musicians. While, like Joplin, Barksdale was born in Port Arthur, Texas, she is currently based out of Los Angeles where she is a favorite on the West Coast blues and R&B circuit. It was Barksdales grandfather who gave her a guitar when she was twelve. 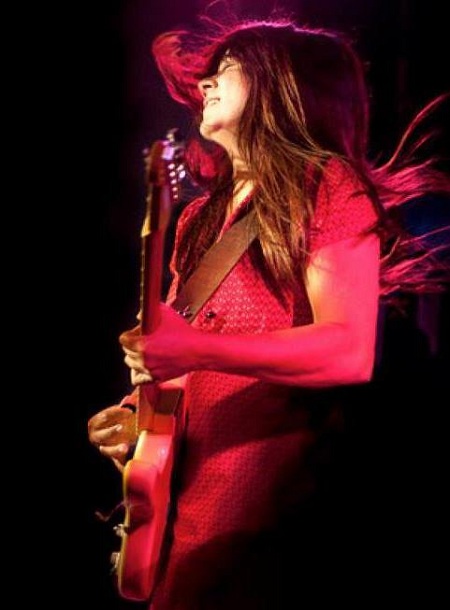 A professional at sixteen, she learned to play and was introduced to the blues gigging with local musicians and performing in a number of regional bands. After nailing down guitar and vocal duties with boogie-blues masters Canned Heat, Barksdale landed the lead guitar spot with Michael Jackson adding some fiery punch to the King of Pops 1993 Dangerous World Tour. The first artist to be signed by the House of Blues Music Company, Barksdale appeared on two compilations on the label before releasing Real Live (1999), a gripping mélange of electric blues and steamy rock that easily justified the growing hype crowning the Red Hot Queen of the Blues. Cowgirl Blues (2002), an EP of five original songs unearthed her country roots (two great uncles were members of the Sons of the Pioneers), while Blues Revue Magazine declared that there was more emotion packed into the dozen real-deal blues tracks on Out of the Blue (2003) than racks of others. The most recent albums were Easy (2012) and The 2120 Sessions (2013) featuring Becky's favorite classic blues songs by Willie Dixon, Clarence Gatemouth Brown, John Lee Hooker and more. Those unfamiliar with Barksdale's discography will certainly have heard her musical compositions highlighted by her scorching guitar work and gritty, soulful vocals on numerous trailers and soundtracks for acclaimed motion pictures like Munich, Cold Mountain, Finding Neverland, Mission Impossible lll,  as well as many of the latest scream-inducing horror flicks.                (Bio by Ken Wright / Photo by Chuck Ryan)

There’s a zone that I get into when I’m playing all genre of music that’s just an amazing feeling and I know lots of musicians experience this. But when I’m playing blues or blues based music there is a zone like no other - where nothing else matters and time doesn’t exist. Blues means freedom to me.

How do you describe Becky Barksdale sound and progress, what characterize your music philosophy?

I tend to migrate to the darker heavy side of blues. I really like to experiment with different sounds and ideas. On my latest album THE 2120 SESSIONS, I had lots of fun playing in the studio, borrowing from different styles and taking a fresh approach to some of the tracks while other tracks are more raw and pretty much live. For me it’s the best of both worlds. 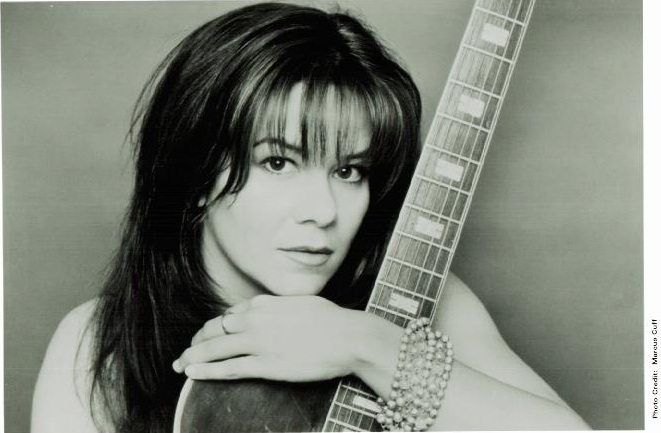 "Well the internet is definitely a huge game changer. It’s great that artists can record the music they want without any kind of filter. But it’s tragic that a lot of folks don’t want to pay for music anymore."

This is a hard one - I’ve been really lucky and had the opportunity to play with so many great musicians. One evening I opened up for Etta James and she came out on stage during my show and gave me a big hug and a beautiful bouquet of flowers and announced to the crowd that she was welcoming me to the Blues World. That’s a night I’ll never forget. I was also the guitar player for the China Club Band in LA for a while and there were always great musicians and artists dropping by and sitting in. Everyone from Bruce Springsteen to Rick James - I can’t tell you how much fun it was to play ‘Super Freak’ with Rick James!

Hands down that would have to be the evening I met Brian May. I was just a kid playing in a band on Bourbon Street in New Orleans and he just happened to be there on vacation.  I couldn’t believe it! I hung on ever word he said even though I didn’t completely understand at the time what he was talking about. Years later as I was playing more and more I would think “ahhhh so that’s what he was talking about”

I have a great collection of old blues recordings so the blues of the past is never too far away. My go to vinyl lately though is from the 60s - “This is Howlin’ Wolf’s new album. He doesn’t like it. He didn’t like his electric guitar at first either. “ Just love that album. 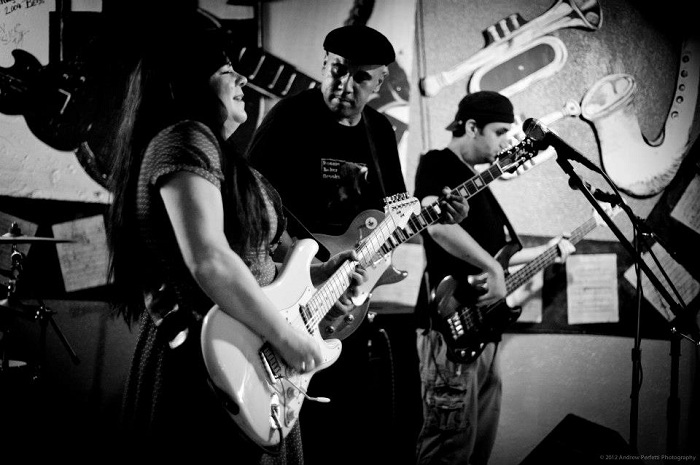 "I tend to migrate to the darker heavy side of blues. I really like to experiment with different sounds and ideas."

Well the internet is definitely a huge game changer. It’s great that artists can record the music they want without any kind of filter. But it’s tragic that a lot of folks don’t want to pay for music anymore. I know some great artists that have always made a living in music that now have to get day jobs just so they can keep doing what they love. Hopefully things will balance out in the near future.

I would have to say right now. The CD I just released is the recording I’ve wanted to make for years. You go in the studio and you can never be sure how things are going to pan out. There’s always that bit of mystery there. But THE 2120 SESSIONS sounds exactly like I heard it in my head. I’m really proud of it. As far as worst moment - I think I’ve done pretty well to forget about those. HA!

What are the lines that connect the legacy of Blues from Port Arthur, Texas to Los Angeles and beyond?

I have a friend who always says “There must be something special in that Port Arthur water”. It really is interesting how many great musicians came from that small town. I think there’s a certain feel that folks have there and it bleeds into their music.

Which memory from Canned Heat, Michael Jackson and John Popper makes you smile? 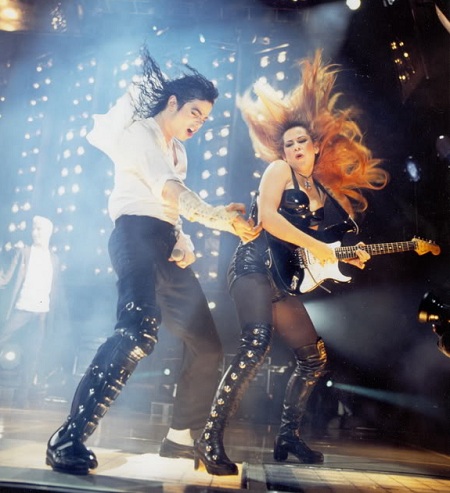 There are so many great memories I could write a book here. But one that stands out is when I was playing “Black Or White” with Michael Jackson. We had specific blocking and places we needed to hit on stage but other than that he said to just have fun with it. Then one night i was in the middle of the stage playing with my eyes half closed and I felt someone grab me. I thought it was a crazed fan who broke through security to get to Michael and I was scared to death. And then I spun around and it was Michael. He was laughing so hard …and I was too once I realized it was him. He was a lot of fun like that.

What does to be a blueswoman in a “Man World” as James Brown says? What is the status of women in Blues?

It’s really great to see how much things have changed. It’s a lot better now than it was. But honestly It has been very difficult for me and many other female musicians I’ve spoken with. I would show up at recording studios to do sessions and be asked whose girlfriend I was. Even more recently - I hired some background singers for a track I was producing and mixing in LA and when the session was over they thanked the male engineer for the work. Actually kind of funny.  Pretty soon that’ll all be a thing of the past. Even in just the last few years there has been such a complete change in how female guitarist are perceived  - female musicians in general are taken a lot more seriously and not looked at as just a novelty any more.

I guess I wouldn’t necessarily need a time machine but I would love to go to space. That must be the most amazing feeling to look back at the earth from out there. Plus floating around playing guitar in a space station sounds pretty cool. I’m sure it would be a life changing experience that would change your perspective of the world forever. 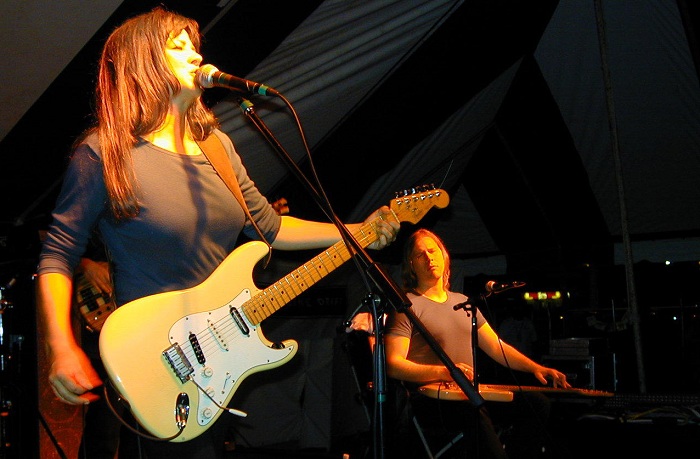