"I'm not afraid for the future because there is no future, only the present exists. My hope is that in this eternal present the consciences of everyone could be released and reunited. Only then can the future exist."

Professor Bones is an anonymous composer and pianist who has chosen to dive into a skeleton’s clothes, thus hiding his true identity. Little or nothing is known about his life; except for the fact that he appears to have the bowels of the underworld from the land of the dead — where his songs and compositions on the piano take life, and where he celebrates the Blues and its Masters. The themes of his creations express and recount memories and emotions of an earthly life, permeated by the feeling and the certainty of being dead. It is the netherworld, where he can meet anyone, from where his stories are born and from where everything takes shape.There are no rules, no time nor space; there is no style nor any precise sound. Everything flows from the piano and his cavernous voice and by whatever kind of instrument that he decides to use in order to express himself. So, this is Professor Bones: a creature, that in order to survive, had to die first and then rise from the grave. "From when I died, I found the sense of life." (P.B.)

What do you learn about yourself from the blues & jazz culture and what does the blues mean to you?

I first started to play the piano at 3 years old, and I've always thought that there must have been a good reason, something profound and incomprehensible that pushed me to learn it so prematurely. There aren't any musicians in my family going back generations, not even distant ancestors. Now I understand that the only reason was and is: The Blues. Perhaps my soul started a path in me with continues today. The Blues is a language with which I can express my best, and at the same time is the cure for all my ails - the motor which drives my creativity. It's immensely therapeutic to the point that it can even give sense to death, and this I know.

What were the reasons that you started the spiritual and Blues & Jazz underground researches and experiments?

During my earthly life I spent a lot of time studying and playing the blues in all its forms, especially those more archaic and primitive. I’m also speaking of Ragtime, Boogie-Woogie. I’m talking about the Afro-American music culture. My teachers were the records, past Blues-masters, their stories, their lives and their experiences. Suddenly I realized that everything I had learned came from dead people; from dead bluesmen. This is why I began to celebrate the blues through death. And to do that I had to die too, in my way, descending into the underworld. Underground. Now I can say that I understand life, The Blues, and that my soul is not owned by the devil, but by Death.

How started the thought of Professor Bones? How do you describe your sound, songbook and music philosophy?

It all started the day I left the land of the living and I dropped myself into the world of the dead. From down here everything looks different. In the music and in the songs I write, I like to talk of the world I live in, the netherworld. Underground. I cannot forget my earthly life, the joys and sufferings from when I was made of flesh. This is the story in my songs. Life and death, and the Blues accompanying both. The sound is not important, I feel free to play what I want, in any way. My friend, somebody killed me, and it's killing you too, everyone. Maybe it's time to stop laughing and start crying. I hope that my music helps someone to reflect and shed tears of awareness. "The Blues is a language with which I can express my best, and at the same time is the cure for all my ails - the motor which drives my creativity. It's immensely therapeutic to the point that it can even give sense to death, and this I know." (Photo: Professor Bones & the Living Doll "Gloria")

I miss the little things, the simple pleasures of life, the slowness. In the past, slavery was an important element for the birth and development of the Blues and other African-American cultural forms. Well today has not changed much in this regard. We are all slaves, all of us, and this is why now more than ever the Blues is within each of us. I'm not afraid for the future because there is no future, only the present exists. My hope is that in this eternal present the consciences of everyone could be released and reunited. Only then can the future exist.

Make an account of the case of blues in Italy. Which is the most interesting period in local blues scene?

Needless to say that here in Italy there has never been a great enthusiasm for the Blues and for African-American culture in general. However, the Blues has still managed to creep in among the populous, among musicians, creating a scene, albeit small, of followers and fans. Since the late '80s to today events, concerts, and festivals have mushroomed and often these activities have happened, and happen in small provincial towns. This is the magic of the Blues, a music that is seemingly distant and unknown ends up getting everyone involved, including Italy.

What are the lines that connect the legacy of Blues from Africa and United States to Caribbean and Italy?

The connecting lines are varied, and were probably started by the phenomenon of The Blues Revival of the 60s and 70s, when Europe opened its doors to the American Blues. This created fertile ground to grow the Blues overseas. I think we should thank Alan Lomax and other ethnomusicologists and researchers who, like him, exported in the beginning what would have otherwise remained African-American popular music. People, time, and musicians did the rest. It’s the strength of the Blues, able to grow in the most arid areas of the planet. I don’t believe there is any music more powerful than the Blues. "I would completely change the whole system that ties music to television; which for too long has provided wrong and unacceptable role models. To be honest, I would destroy every single television set on the planet." (Photo: Professor Bones from videoclip of "My Love Was Real")

There is a phenomenon that has intrigued me in recent years. That makes me smile and excites me because it is a clear example of a musical adaptation to the times. It is the phenomenon of a so-called "one-man band". I find that music has always been the mirror of society, and today’s society is in crisis in many respects. The need and dissatisfaction have always been for me the motor and the creative drive. This is why I find the sublime art of wanting to do-it-all-yourself and overcome the shortcomings in a world that wants to divide and isolate the creative power, that inspires us still further to communicate something, even if that’s done alone. The image of one-man band is a perfect example of resistance. Artistic, physical, and economic. I am one of them.

The impact is devastating, the thought is devastating, and that's why I cannot answer without making certain considerations. The fact that from something so atrocious as slavery, racism, and the deportation of a people and its culture, arose forms of art and music so elevated that one has to stop and think. I want to ask you a question. If you could go back a few centuries and change the course of history, cancel the whole phenomenon of Black slavery? The deportation of black people into the New World? To wipe out what we now call Blues? Whatever we think, we cannot go back. We can only celebrate the Blues through art and music with respect and reverence. The power of man, in all his forms, generated the Blues and with it, all modern music. That’s it.

I would completely change the whole system that ties music to television; which for too long has provided wrong and unacceptable role models. To be honest, I would destroy every single television set on the planet. It would cease to terrorize, create disinformation, and even cease war. It would be a real breakthrough for all of humanity. 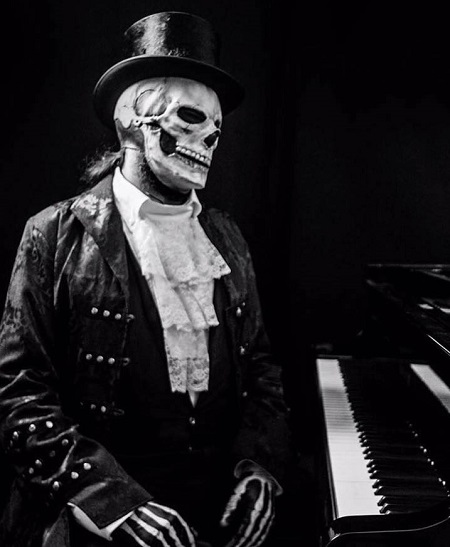 I would like to go everywhere, and that's exactly what I do every day, because I live it and I need it. My time-machine is my music.

In fact Robert and I see each other often, we go for long walks, he’s very talkative and likeable. He once took me home, we went in the door and he said: "Hey Mom, I’ve come home with a friend!"

That was the day I met Death, a big beautiful woman.

I don’t know if Tim Burton’s ever been down here. One day I'll surely ask him...