"Music and humor are for the healing of the nations. "

Leonard Solomon proves that they are born from a love of music and a passion for invention. Since he first created The Majestic Bellowphone in 1983, he has been delighting audiences young and old with his interpretations of well-known musical works, performed on some of the most ingenious instruments ever heard or seen. He interprets classics such as Handel’s Water Music or Rossini’s Barber of Seville Overture on a miniature pipe organ built from plumbing parts and coat hanger wire, and he demonstrates the workings of pipes, reeds and homemade whistles. The students are shown how an ordinary drinking straw can become a “beeper,” and how a tube made of dog food cans can produce a surprisingly rich tone. 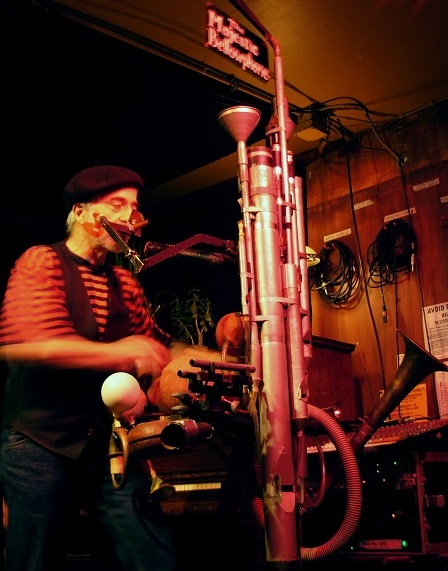 The Bellowphone Show is enjoyed by teachers and students alike, and is appropriate for all primary and secondary grades. The specific content of any given performance is geared to the grade levels present, and questions from the audience are encouraged after the show. Classically trained musician, inventor, and one-man-orchestra Len Solomon performs a unique recital of music and comedy. The Bellowphone Show has been bringing music and laughter to audiences in this country and abroad for over 25 years. Len majored in guitar and early music at Antioch College, and followed that with two years of playing guitar in a country-rock band in Idaho. He finally gave up the glory of playing for drunkards in bars five nights a week, and went to work for 10 years as a professional cabinetmaker in the Boston area. In 1983, in his Cambridge basement, Len built the Majestic Bellowphone, and he took it to the streets along with his 5-ball juggling routine, taking his place among the ranks of classic Harvard Square street acts. In 1991, Len gained national recognition as a featured performer in PBS' Lonesome Pine Specials' One-Man Band Extravaganza, taped at the Kentucky Center for the Arts in Louisville. In 1998 Len appeared in "A Taste of Passover" in Jordan Hall, Boston, which was also broadcast on national TV; he performed 22 shows in a week-long Festival of the Arts in Singapore; was invited back to the Kentucky Center for the Arts for a return engagement, and that year was also featured on the experimental music CD “Orbitones, Spoon Harps and Bellowphones”. The following year he was back at Jordan Hall to perform his comedy in the filming of "A Taste of Chanukah" and then he was off for the 2-week Tempozan Festival in Japan. Len performed as the "Mad Minstrel", one of the daily acts at King Richard's Faire in Carver, MA in the fall of 2006 and 2007. He also appeared for several years' running as the "Phenomenon", in the Revels Repertory Company's touring production of "There's a Meeting Here Tonight!"

How do you describe Len Solomon sound and songbook? What characterize your music philosophy?

My favorite listening music is Baroque and early classical, and I also enjoy dixieland jazz, country, rock, blues, and traditional folk music of different countries. When I think of what piece to learn for performing on my weird instruments, of course it has to be a piece that I really like, but also I want it to be something that people will recognize, whether it's classical or folk. Then they will find it more interesting, because of being familiar, but in a strange context.

How started the thought of Bellowphone? The Bellowphone was inspired by an instrument built by Harry Partch, which he called the Blo-Boy. That was a cluster of organ pipes, which would play one magnificent chord when a bellows was depressed with the foot. I thought it was very good, but it would be better if it could play more than one chord. So that started my idea of building a one-man-band using organ pipes and squeeze balls. From the library I got books about pipe organ construction, and I spent several months learning, experimenting, and building in my basement workshop, until the Bellowphone was finished. That was in 1983. When I first played it on the street in Harvard Square, I made more money in one weekend, than I made in a full week in my job at a cabinet-making shop. So that's when I changed careers.           (Photo: Leonard Solomon & the Bellowphone, c. 1985)

What touched (emotionally) you from the medieval technology and instuments?

Pipe organs have always fascinated me, because they can make all that beautiful sound just by mechanics, with no electricity. The organ technology is many centuries old; hand-pumped organs were heard in Medieval churches; and although I do use some modern materials like PVC and aluminum pipe, my reed pipes and flue pipes still make their sound the same way they did hundreds of years ago.

My Mom always encouraged me to play music, and my Dad always gave me tools, and showed me how to use them. They both said, "As long as it makes you happy…"

Which is the moment that you change your life most? What´s been the highlights in your life so far?

Are there any memories from gigs, workshops, school projects and busking time which you’d like to share with us?              (Photo: Leonard Solomon & The Callioforte, c. 1994) 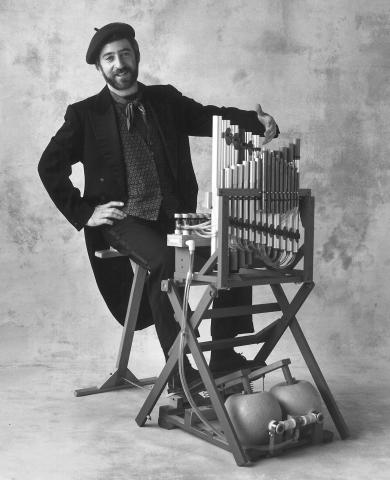 I still like to street perform now and then. It's a good feeling, of staying connected with people. One time a few years ago, there was a man and his wife standing in the audience at my street show; The man was holding the hand of a little girl, and his wife was holding a baby in her arms. When the show was over, the man came up to me and said, "It was great seeing your show again. You performed an assembly show at my school when I was in second grade." One of my favorite moments performing, was in a big stage show in Jordan Hall, Boston, a grand old concert hall. I was part of a show called "A Taste of Passover." in which I was doing short 5-minute bits in between the other acts. In one of my entrances, I was planning to play just the first few measures of a song on a harmonica, before going into the comedy routine. But when I started the song, the people started humming along. It was an old familiar Jewish melody, and they all knew the tune. So instead of doing the routine as I had planned, I just kept playing the song on the harmonica. The whole audience was swaying back and forth and humming along with my simple music, and for a timeless minute, I felt like I was in a dream; as if I had seen this experience in a vision, long ago. It was one of the sweetest moments I've ever had on stage.

Well, everybody says this, but so much of popular music today is over-produced; layered, looped, and auto-tuned. I want to hear just the live sound of a four-piece band, playing and singing with no special effects. The Beatles could play live, and it would sound just as good as the record. But even with all the changes we see today, there are still plenty of good musicians who like to play real instruments for a live audience; and despite technology, there always will be.

I feel that music is played far too loud in clubs. I've never understood that. Another thing is, music is piped in everywhere you go in public: in restaurants and stores; it is not intended to be listened to, it is just being used as background noise. I find that irritating. 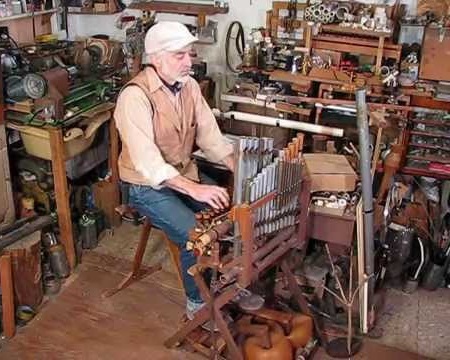 How important was music, comedy and humor in your life and what do you learn about yourself?

I learned that if you are doing something well, people are much more willing to listen to your bad jokes.

What is the impact of music, humor and comedy to the racial, political and socio-cultural implications?

Music and humor are for the healing of the nations.

Political so-called "humor" only increases people's angst and sorrow. When people laugh at political humor, they don't laugh with joy, they laugh in anger at the "other side." So I do not express any political opinions in public performances. The subject of the comedy or song, should be something that people on both sides can enjoy. After I perform a show, I'm glad even if only one person says, "That made me feel happy," Then I know that I'm doing what I'm supposed to be doing in this life.

I would like to travel to Germany, ca. 1740, and listen to Johann Sebastian Bach play his Goldberg Variations. I would like to spend some time in his company, although I would probably be too frightened to say anything. And if I were permitted one other thing, I would like to be present for just one hour while the Great Pyramid was under construction, to find out how they did it, and why.