"There was a folk movement long before the 60s. It was often associated with “lefties”. In a way folk music was a rebellious reaction to the conformity and “white bread” culture of the 50s."

Kenny Kosek is one of the most recorded fiddlers in America today, having been the feature soloist on hundreds of albums, soundtracks, and jingles. He can be heard on recordings by James Taylor, Jerry Garcia, David Byrne, Chaka Kahn, Willie Nelson, and John Denver. He has been a frequent guest player with the Late Night Band on Late Night with David Letterman. Kenny's distinctive roots music-inspired compositions have been used in the documentaries The Way West, The Donner Party, Harlan County, U.S.A., The High Lonesome Sound, and the Broadway musicals Big River and Foxfire, NBC's Another World, CBS's Guiding Light, and Fox's Kirby Kids. 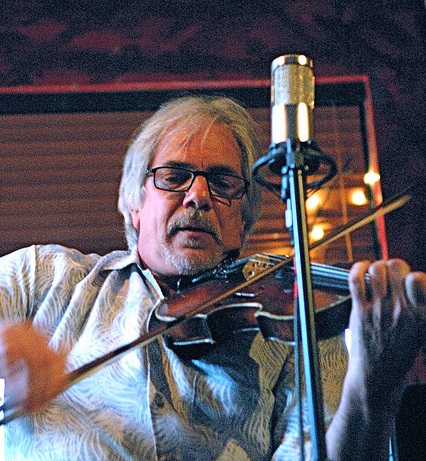 Kenny's music instruction has been prolific. His teaching can be found on Homespun Tapes and Videos' Learning Country Fiddle, Learning Bluegrass Fiddle, and Bluegrass Classics. He was a guest instructor at the Falun Folk Festival, Sweden, Tonder, Denmark Festival, the Sore Fingers Music camp, Cotswalds, England, the Big Apple Bluegrass Festival (1998-2002), and the Rathcoole, Ireland Folk Arts Festival (2004). He is a staff instructor in country fiddle at the Turtle Bay Music School in New York City. Kenny appeared in the movies They All Laughed, and The Stepford Wives. On Broadway, Kenny's theatrical work includes The Robber Bridegroom, Platinum, Play Me A Country Song, Foxfire, Big River, Jerry Garcia on Broadway, and Footloose. Off-Broadway, he performed in Feast Here Tonight, Das Barbecu, That and the Cup of Tea, A Celtic Christmas, Lost Highway, and Picon Pie, among other theatrical endeavors. As a writer and humorist, Kenny has contributed to The National Lampoon and has been in demand as a writer of liner notes for a variety of artists from 1980 to the present.

How do you describe Kenny Kosek sound and what characterize your music philosophy?

Coming from a non-classical violin background, I taught myself old time, bluegrass Irish, Klezmer and swing fiddle styles so my tone is slightly more rough-edged than a “legitimate” violinists’. I have allowed myself to blend these influences in developing a (I hope) unique sound and improvising sensibility.

Since technically folk music is orally transmitted, that is, it is traditionally passed on from human to human and has at its heart an antidote to digitalism and its attendant isolation. These days of course any music form has a literature in recorded, broadcast and written media but roots music maintains a sense of community and inclusivity - it’s accessible and playable without formal schooling or a large monetary investment. A beginner can begin to enjoy playing it in a relatively short time. "American music - jazz, bluegrass, blues, rock, country and western are all the result of the confluence of West African and Western European music distilled through the agonized history of slavery and the post slavery Afro-American experience."

I miss scratches and surface noise on vinyl, the crackle on AM radio. Otherwise there’s hardly any music of the past that isn’t being revived somewhere. As a professional musician in NYC, there’s a move to replace theater orchestras with synthesizers and software instrument keyboards. It’s part of the robotization of the work force. In this more or less post - CD era musician’s pay scales and royalties have been co-opted by the owners of social media like YouTube and by the systematic castration of musicians’ unions (and the labor movement in general). I hope that eventually an equitable profit sharing system for all digital media is enacted.

What were the reasons that made the 60s generation to start the roots/folk searches and experimentations?

There was a folk movement long before the 60s. It was often associated with “lefties”. In a way folk music was a rebellious reaction to the conformity and “white bread” culture of the 50s. 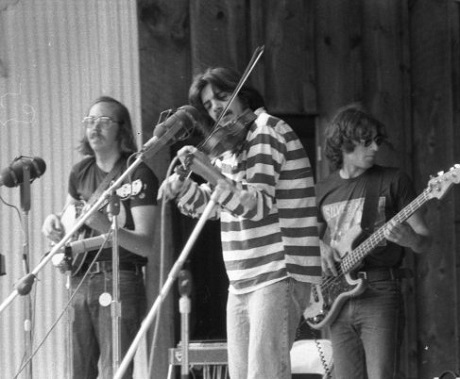 The meetings of my longtime musical colleagues like Andy Statman, Tony Trischka, Marty Cutler, Andy May and Jon Sholle with whom I’ve spent my life creating music.

Allen Feldman and Andy May in 1963 suggested I take up fiddling.

Are there any memories from Jerry Garcia, Doug Sahm, and Willie Nelson which you’d like to share with us?

Jerry Garcia was a kind, generous man with a great sense of humor. I’ve never been onstage before or since with a performer who had a mutually closer, easier or more affectionate relationship with his audience.

Doug Sahm I only met at the recording sessions for his album Doug Sahm and Band. We played double fiddles on a couple of cuts and we were both amazed at the instant rapport between Austin Texas and NYC.

I did a recording of the Christmas song “Please Come Home for Christmas” with Willie Nelson. Willie overdubbed a perfect solo in one take on that famous guitar with the hole in it.

What are the lines that connect the Blues with Folk, Klezmer and continue to Jazz, Rock and Bluegrass?

American music - jazz, bluegrass, blues, rock, country and western are all the result of the confluence of West African and Western European music distilled through the agonized history of slavery and the post slavery Afro-American experience. Klezmer has some of the same vibe of a repressed people putting their cultural imprimatur on and borrowing from the musics they pass through.

The blues ain’t nothin’ but a good man feelin’ bad. 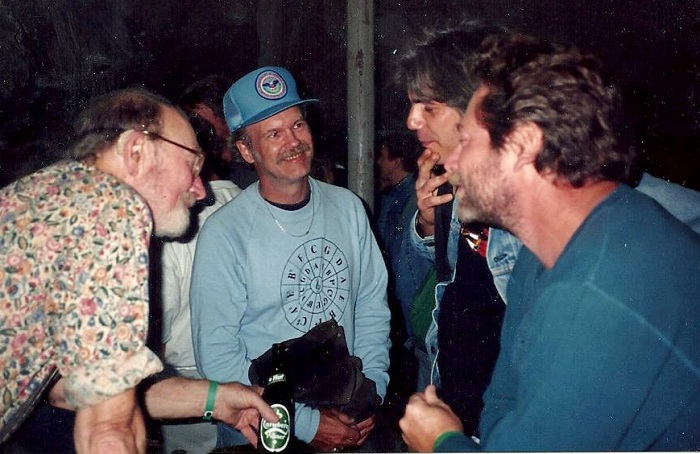 "Since technically folk music is orally transmitted, that is, it is traditionally passed on from human to human and has at its heart an antidote to digitalism and its attendant isolation." (Photo: Kenny with Pete Seeger, Bill Keith, and Eric Weissberg, Tonder Festival Denmark 1989)

How can the humor and the arts to crush the shackles and heal of the human spirit and mind?

People are less likely to kill each other if they’re laughing, painting, dancing and making music together.

What has made you laugh lately and what touched (emotionally) you from our world and the music?

Upon leaving Pere Lachaise cemetery in Paris I was thinking profound and troubling thoughts of mortality and death. Walking back on Boulevard de Menilmontant I slipped on a banana peel and fell flat on my back. I could hear God laughing, holding a Harpo Marx horn. I had to laugh too.