"There seemed to be more depth, creativity, love, talent, and overall musicality in much of the music that the general public was exposed to in the past."

Planet Full of Blues is a versatile, seasoned, and professional guitar fueled blues/rock band based on the sweet southeast coast of Virginia. Although best known for their original music, the band pays homage to those that have come before them. Live performances often include a mix of originals and covers by favorite blues masters such as BB King, Tommy Castro, Stevie Ray Vaughan, Popa Chubby, Freddie King, and others. PFOB’s sound reflects the best of today’s progressive blues/rock.  The Band is: Johnny Ray Light - Guitar, Vocals, Songwriting; Brock Howe - Drums, Vocals, Songwriting; and Ron Dameron on Bass and Vocals. 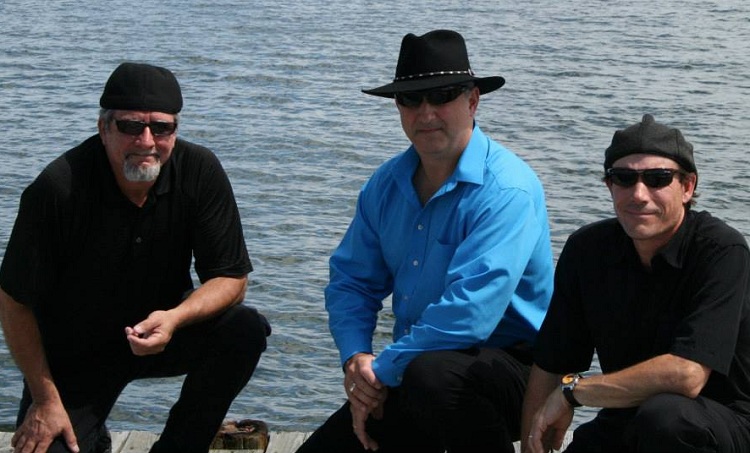 Planet Full Of Blues released a self-titled debut album in August 2008. The title song on the full length self-produced CD remained on the National Blues Roots Chart for over 30 weeks as one of the top 50 blues songs played on radio stations all over the United States. The 11-song album was recorded and produced at Awe Struck Studios, Kansas City.

Johnny: Through the blues I have learned just how profoundly moving and personal music is to me.

Brock: I've learned that music is my favorite way to view and express the human condition. The good and the bad... Blues is more real than the day to day world we navigate.

Ron: I learned that it’s okay to feel bad and sing about it. But more often than not, it’s a good outlet for fun too.

How do you describe your sound and progress? What characterize Planet Full of Blues philosophy?

Johnny: I definitely think we lean more towards the high-energy contemporary blues-rock side of the spectrum. Our second album is quite a bit different than the first. Where the first album, includes some killer horn players, our second album focuses on the core 3-piece band. Although I am proud of both albums, this latest album is truer to who we are and sound like in my opinion. My perspective on our band’s philosophy is that it is very important to me that we are real, honest, sincere, and passionate about what we do and how we do it. To be any other way would be very hollow to me and basically impossible to do.

Brock: I think we are solidly in the blues/rock genre. Our originals blend the influences of both traditional and modern blues styles with the good old rock and roll we grew up hearing on the radio. We like music with melody that grooves and keeps your feet and hands tapping.

Ron: Simplistic and effective with plenty of room for expansion. 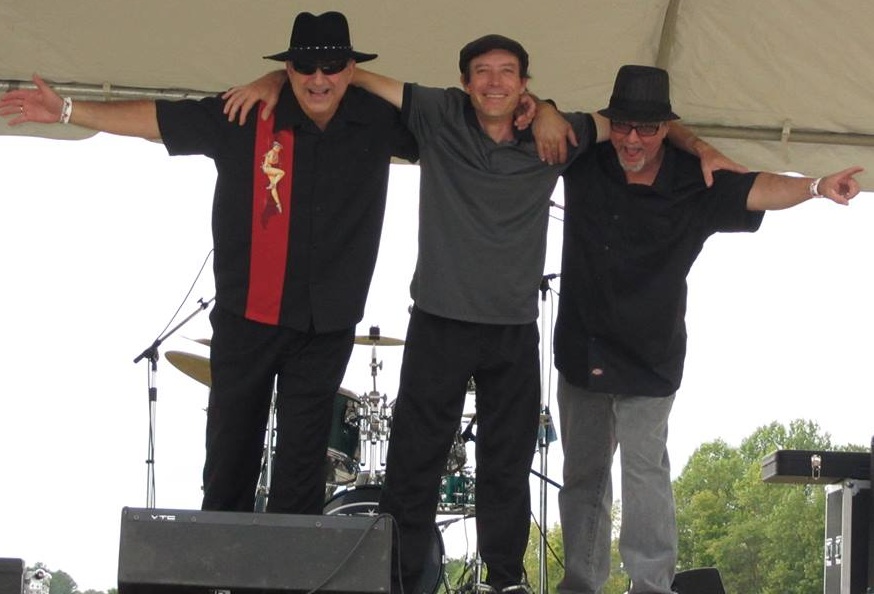 "I miss that the messages of mainstream music used to be much more of a challenge to the status quo. Sticking it to the man... Popular music is too innocuous these days..."

Johnny: There are many. However, the most memorable gig to me was the very first gig in which I performed several sets of original music over several nights to a packed and crazy house. I was hooked after that experience. The experience validated to me that I could perform original music, which was contrary to the opinion of many people who advised otherwise. Another one of my favorite experiences is when we traveled to Belgrade, Serbia to perform at the Blues Stock Blues Festival. We got to hang out with a number of the local musicians and jam with them is some tiny packed clubs, one of which could have been described as private little juke joint. The whole trip was quite incredible and memorable.

Brock: Playing the Bluestock Festival in Belgrade, Serbia was simply fantastic.  The people were really excited to hear our brand of music and the reception they gave us was phenomenal.  I once had the opportunity to jam one on one with Chris Duarte.  We played some Coltrane, though I was unaware what we were playing.  Afterwards he smiled and said, "you play a mean 'Trane'," so I guess I did alright.

Ron: 106 degrees…four hours… The ones with attractive women in them.

Johnny: Without a doubt, the most important music industry related meeting that I have had to date would be meeting and working with multi-Grammy award winning producer Jim Gaines.  The man is definitely a living legend who has worked with many of the greats that we have grown up with like SRV, Santana, Steve Miller, Huey Lewis, and many many more.  The band was fortunate enough to have the opportunity to spend a week with Jim during the recording of Hard Landing. Not only did Jim provide invaluable insights and guidance throughout the recording process, he shared countless memorable industry related stories with us.

Brock: The best meetings are those with other musicians who just love what they are doing.  They inspire you to pursue your own music keep playing as long as you can.  The best advice I ever got was from a fellow musician who told me to  keep my stick on the ice.  Also good advice:  play each gig like it's the most important one of your life.  Whether there are 5 or 500 or 5,000 people...

Ron: Meeting Jim Gaines and spending a week recording with him.  Legend. Advice: “The more you practice, the better…But in any case, practice more than you play.” 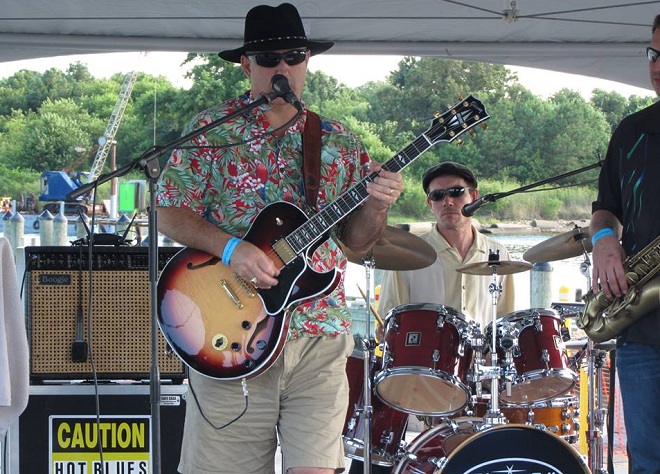 "Our originals blend the influences of both traditional and modern blues styles with the good old rock and roll we grew up hearing on the radio. We like music with melody that grooves and keeps your feet and hands tapping."

Are there any memories from recording time with Jim Gaines which you’d like to share with us?

Johnny: I have many memories of the sessions with Jim Gaines. For instance, he is an extremely hard worker who has a fantastic ear and aptitude for nuance. He is constantly thinking while he is listening and provides lots of ideas and recommendations for improvements. Speaking of being a hard worker, I think we logged about 12+ hours a day on many of the days that we were with him. It was pretty exhausting. Also, he has an incredible ability to get a really solid mix in literally minutes. Pretty incredible.

One somewhat humorous memory relates to a vehicle issue we had while travelling to Jims studio. Basically, on the last leg of our trip to Jim’s studio the van we were travelling in nearly caught on fire. Jim basically ended up having to chauffeur us around from hotel to studio and back for a few days while the van was in the shop. Interestingly enough, during our rides with Jim we found that that he didn’t listen to music in his car or at home. Who would have thought?

Brock: Jim really enjoyed telling us stories about many of the famous musicians he's worked with over the years.  At some point I realized that if a movie was to be made about my life, the songs he produced could easily make for the perfect soundtrack.  I never imagined that I would someday make an album with someone of his stunning accomplishments in the music industry. Working with him was surreal from beginning to end. Thanks, Jim!

Ron: Yes.  Asking for my opinion during the recording session.  It really didn’t matter but he had enough confidence in me to ask. 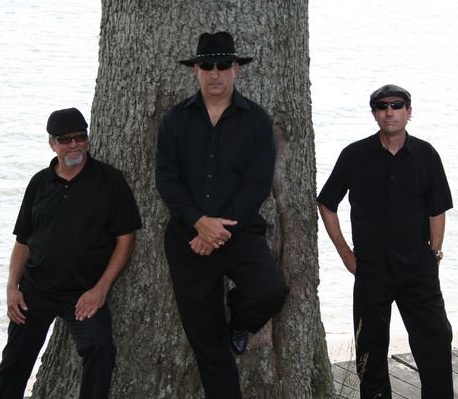 Johnny: To me there seemed to be more depth, creativity, love, talent, and overall musicality in much of the music that the general public was exposed to in the past. These qualities certainly still exist out there in the many great artists that are out there; both known and unknown. However, I am concerned with the direction music has been going for some time. Although there are undoubtedly many music lovers out there, my sense is that not as many come out to see live music at the rate we did when I was growing up. Sometimes there seems to be a celebration of mediocrity.

Brock: I miss that the messages of mainstream music used to be much more of a challenge to the status quo. Sticking it to the man... Popular music is too innocuous these days..

Ron: Authenticity and rawness. Being a musician instead of a karaoke singer or a tech freak. Hopes? to earn a decent living playing music….Fears? none

What are the lines that connect the legacy of Blues with Rock & Soul and continue to SRV and BS&T’s music?

Brock: Ummm.... You wanna take this one, Johnny?

Ron: The interest and participation by all those musicians who love this music.

Johnny: Memphis in the 1950’s. I would have loved to have had a chance to feel and experience the vibe from that area of the country. It was an incredible time in our nation’s history with all the excitement of the new music being made and the technologies being developed. Can you imagine? Riding around in an old Cadillac convertible along an old dirt road on a warm summer night listening to Chuck Berry, Bo Diddley, and Elvis, on the AM tube radio; it must have been awesome.

Brock: I would go back to the late 70's and catch a Little Feat concert. I'm a huge Lowell George fan and Richie Hayward was one of my favorite drummers. Hayward was just the coolest drummer ever, not to mention his awesome back up vocals. I loved his ability to make anything groove -funk, blues, rock, jazz, country, and sometimes all of those rolled into one. He was a great inspiration to me...

Ron: I’d probably like to be at any small club where Albert (The Ice Man) Collins is playing.