Interview with the master of Roadhouse Soul, Brian Langlinais - has a calling: to bring great songs to life

"To me music/art is totally subjective. There are paintings that are considered masterpieces that I would consider no better than my children’s kindergarten drawings…it’s all in the eye of the beholder."

Brian Langlinais: On The Right Side

Brian Langlinais has a calling: to bring great songs to life. Whether he’s on a festival stage, in a bar or in the studio, Langlinais’ vibrant singing puts flesh and blood on the lyrical and melodic bones of every number he performs. His dust-dappled voice rings with the truth of experience and an honesty of expression that few entertainers possess. Louisiana native’s albums provide a house-rocking intersection for some of the greatest songwriters in American roots music. Langlinais has developed a style that straddles the worlds of pop, country, rock and soul, with an accent on the latter. His high-energy, soulful and emotionally honest live performances have earned him a reputation as a modern torch bearer of the roadhouse tradition. 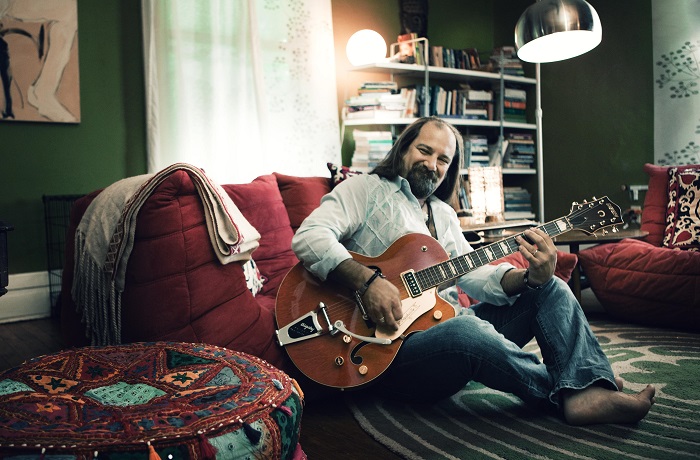 His new cd “Right-Hand Road” -coming out September 2016- marks a return to the source for this Louisiana-born master of Roadhouse Soul. He recorded the album with Grammy-winning co-producer and engineer Tony Daigle at Electric Comoland Studios in Lafayette, Louisiana. The album was produced by Langlinais and multiple Blues Music Award nominee D.L. (Dave) Duncan. His previous two solo albums - 2006’s Rock and Fire and 2010’s Tonight I Might - are signposts of his evolution as an artist. In recent years he’s also been part of the Austin, Texas, supergroup the Mystiqueros, a revolving collaborative of A-team led by songwriter-guitarist extraordinaire Walt Wilkins. Langlinais’ high-energy, soulful and emotionally honest live performances have earned him a reputation as a modern torchbearer of the roadhouse tradition, winning comparisons to one of his earliest influences and lifelong heroes, Delbert McClinton.

What do you learn about yourself from the American Roots music and what does the blues mean to you?

For a long time I’ve shied away from claiming my musical heritage of South Louisiana. Not because I wasn’t proud of it. I couldn’t be more so and I think anyone that knows me would agree. I just respect it too much to claim it for promotional reasons. And the music I was creating was closer to the Texas/Americana genre, so it just didn’t seem appropriate. I had been toying around with the idea of going to New Orleans to record my next record when D.L. (Duncan/producer) suggested we go to my home town of Lafayette and try a couple of sessions to see how it felt.  It was the most freeing, creatively, time of my life. Being with people who have the same point of reverence, be it food, grooves, memories, etc. felt so…RIGHT. I guess I had to go all the way around the block to get there, but that where I am now. Home.  So…what have I learned about myself thru/from American Roots music? That I am an American Roots musician/singer. 100% thru and thru. I sing/write/perform music that is built on the pillars that make up American Roots Music: Soul, Blues, Cajun, Zydeco, and Country.  That music defies any radio genre and speaks straight to the heart of the majority of people on the planet. And is absolutely something to be proud of. To me blues/soul music is of the people. Common everyday emotions sung by common everyday people. Not simple or pedestrian …but familiar. Be it Delta blues, Piedmont country, Appalachian, Cajun/zydeco, etc…it can all be blues. 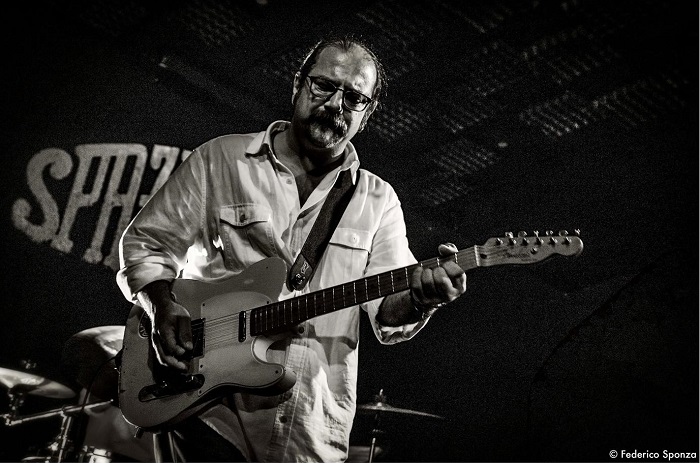 "Nashvillians are a very giving, generous breed of people. The musicians that live in Nashville are no exception.  There are so many fund raising benefits here." (Photo by Federico Sponza)

How do you describe Brian Langlinais sound and songbook? What characterize your music philosophy?

Roadhouse Soul. I play music that moves my spirit, my soul and my feet. I think my job is to do the same for the listener. Hopefully to help them put their worries aside for a short time and enjoy themselves.  Whitey Johnson sings a song called “You Got To Use the Blues To Make You Feel Better”…that’s what it’s all about.

Wow…you mean other than my wife? (Laughs) I’ve been very blessed in my life. I’ve tried to learn from every gig I’ve ever been on. Even gigs that I wouldn’t want to do again have meaning if for no other reason than to help point me in the direction that I’m heading now...back home!  That being said, I have been so lucky to tour with Buckwheat Zydeco, Zachary Richard, the Cajun dance band Filé, and Texas’ Walt Wilkins and the Mystiqueros.

Best advice…My father was a musician who played saxophone in The Shondells (Louisiana Swamp pop band). He always said to leave your problems at home and not to bring them on the bandstand. The audience is there to forget their troubles and it’s hard to get them there if you’re stuck in your own B.S. AND you owe it to your band mates to have a great attitude.

I’ve been blessed to be in some pretty exceptional bands. Filé was such a good Cajun band. Nothing can compare to playing the New Orleans Jazz Festival and making tens of thousands of people dance. I toured with Buckwheat Zydeco when he opened for Eric Clapton. That’s when I found my wanderlust. Working along side of Walt Wilkins, who I think is one of the great songwriters of our time, was and always will be an honor that I will cherish. But I think the most fun I’ve had making music, and I hope it shows, was making “Right Hand Road” - my new CD (releases Fall 2016). The gift of being in the studio with wonderfully talented friends, writing songs that fit that specific moment in time and having a soft, safe, comfortable place to create is indescribable. 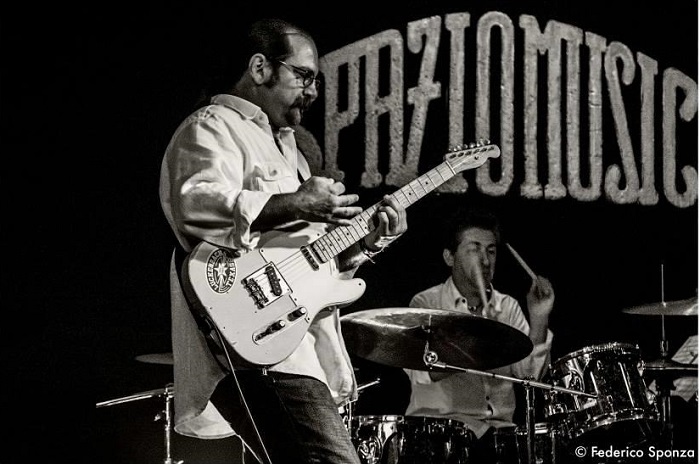 "To me blues/soul music is of the people. Common everyday emotions sung by common everyday people. Not simple or pedestrian …but familiar. Be it Delta blues, Piedmont country, Appalachian, Cajun/zydeco, etc…it can all be blues." (Photo by Federico Sponza)

I don’t know…this is a very complicated question. To me music/art is totally subjective. There are paintings that are considered masterpieces that I would consider no better than my children’s kindergarten drawings…it’s all in the eye of the beholder. Right? So…I don’t really have anything negative to say about the music that’s played on the radio today. I don’t listen to it, but an awful lot of people do. And I thank God that they are listening and are supporting those acts. As for what do I miss? Songwriting. Maybe it’s because I live in Nashville, but I truly believe it all begins with the song. No matter the style or genre.  It all starts with the song.

I wish it were easier for artists/creative people to make a living. Art has become the loss leader to technology. The ‘code’ writers that create the programs to run that technology (iPods, etc.) are extremely protective of their ‘intellectual property’ but have no problem giving away someone else’s. It’s like a car company wanting the tire companies to provide tires for free for each car they sell with the idea that the tire company will get “exposure.” Exposure doesn’t pay the bills and eventually there will be no tires to put on those new cars. You can’t drive a car without tires and you can’t listen to an iPod without music. I believe music/art has tangible value and we should do whatever it takes to make sure creative can keep making it. The best solution I’ve seen yet it David Ross’ idea of funding music as a public utility.

What are the lines that connect the legacy of American roots music from Blues, Soul, to Americana and Honky Tonk? Maybe it’s because I’m a fan of blues and soul music but it seems to me the central connecting line between all music of the South is Blues. Luke the Drifter and Bob Wills don’t happen without Leadbelly and Robert Johnson. And that kind of leads to the next question’s answer…

"I wish it were easier for artists/creative people to make a living. Art has become the loss leader to technology."

Why the Southern states (LA, TN, AL etc.) was/is a ‘Mecca’ of Roots music? What are the secrets of Southern sound?

That area is becoming known as the Americana Triangle. Memphis to Lafayette, to New Orleans to Nashville. Maybe it’s ‘a Mecca’ because blues, jazz, Cajun, zydeco, creole, soul, and country were all born in that region. And I think that speaks to what the “secret” of the Southern sound is as well. The lines between those genres are easily blurred.  Elvis was a white kid singing gospel with a greasy truck driver attitude. Clifton Chenier was a creole man playing jump blues on an accordion while singing Cajun French lyrics to create Zydeco. After Jim Crow, European trained black musicians jammed with African slave drummers to create jazz. And the list goes on.

Wow...Another great question. I don’t know. I’ve been reading Robert Gordon’s book Respect Yourself which is the story of Stax Records. I find it fascinating that the music that was being created at Stax (and to some extent Muscle Shoals) in the early to mid ‘60s was happening in spite and because of the civil rights movement. Duck, Cropper, Al Jackson, Booker T, Carla, they were all just kids. It doesn’t seem like race had much play in it for them.  Just making the best music they could at the time.

Laugh? Hmm…my wife and kids make me laugh…a lot. But I can’t think of anything musically. I get a real kick watching my friend Tony Daigle win Grammy awards. He’s won two in the last two years. Or, watching Ron Eoff play when he’s lost in a groove. 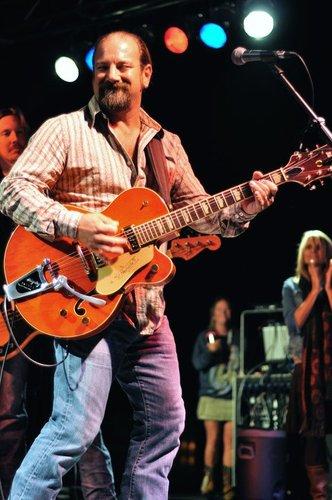 Touched me emotionally? Nashvillians are a very giving, generous breed of people. The musicians that live in Nashville are no exception. There are so many fund raising benefits here. It’s very moving to see artist and “big name” players give their time to help fellow musicians, friends, family members, etc. that are down on their luck.

"I play music that moves my spirit, my soul and my feet."

I would have loved to have been a singer at Stax or Fame in the early ‘60s. OR, at Capitol in LA working with one of the orchestras like Nelson Riddle. Either one would be ok by me!