"I miss the days when people bought music at record stores and when we could go to those stores and talk about music."

Tinsley Ellis is a Blues Rock musician, who grew up in southern Florida. His love for electric blues grew by listening to British Invasion bands. Inspired by a live appearance by B.B. King, he was determined to become a blues guitarist. In 1975, he played with the Haygood Band while attending Emory near Atlanta. Two years later, already an accomplished musician, he returned to Atlanta and joined his first band, The Alley Cats. Ellis graduated from Emory University in 1979 with a degree in history. In 1981 he formed The Heartfixers, with the singer and harmonica player Chicago Bob Nelson. The group recorded three albums for the small Landslide record label, one with the singer, Nappy Brown before breaking up in 1988. In 1988 Ellis signed a recording contract with Alligator Records. His debut solo album on Alligator Records, Georgia Blue, was released in 1988. He has shared stages with Warren Haynes, Widespread Panic, Allman Brothers, Stevie Ray Vaughan, Jimmy Thackery, Otis Rush, Willie Dixon, Son Seals, Koko Taylor, Albert Collins and Buddy Guy. Ice Cream In Hell, the icy-hot new Alligator Records album from Atlanta-based blues-rocker Tinsley Ellis, will be released on January 31, 2020. Ellis will be kicking off his North American coast-to-coast three month tour in his hometown of Atlanta on release date, January 31, 2020. Ice Cream In Hell is the 18th album of Tinsley’s almost four decade career. The album was produced by Tinsley and Kevin McKendree, the great Nashville-based keyboard player who has also produced John Hiatt and Delbert McClinton. Filled with blazing, every-note-matters guitar playing over the course of 11 instantly memorable original songs, Ice Cream In Hell is, according to Ellis, “the most raw-sounding, guitar-drenched album of my career.” Throughout the album, Ellis’ deeply emotional, lyrical guitar solos perfectly match his fervent vocals. The songs range from the nod to Stax-era Albert King, Last One To Know, to the Peter Green-flavored Everything And Everyone to the Hound Dog Taylor-esqe romp Sit Tight Mama before ending with the hair-raising, slow-burning ballad Your Love’s Like Heroin. Though inspired by all three Kings (B.B., Albert and Freddie), as well by Carlos Santana, Hound Dog Taylor and others, Ice Cream In Hell is pure, unadulterated Tinsley Ellis.

We enjoy playing our blues rock music all over the world. There's nothing more exciting to me than performing in a new country for the first time.

How do you describe your philosophy for the music and what characterizes the sound of Tinsley Ellis?

I’ve had many personal challenges in my life, all of which have inspired the lyrics and mood of my compositions. 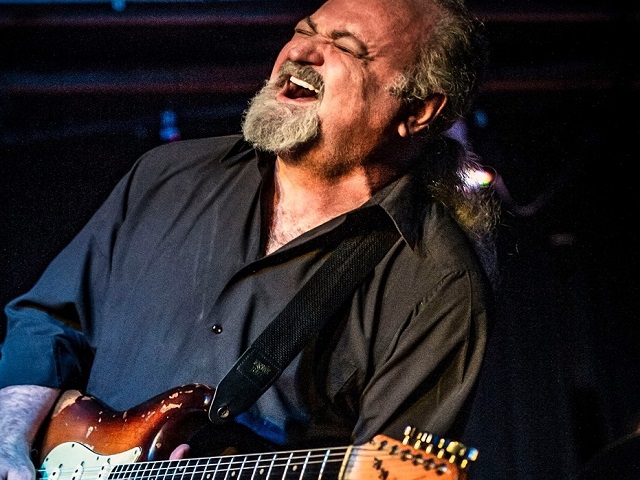 "We enjoy playing our blues rock music all over the world. There's nothing more exciting to me than performing in a new country for the first time." (Photo: Tinsley Ellis)

How do you describe new album (Ice Cream In Hell) philosophy? Where does your lyrics creative drive come from?

The new album is all songs written by me. These are my stories. There's also more guitar on this album than ever before. That is what my fans want.

The best album sessions and concerts are ones where the musicians are laughing and joking and then that vibe is captured in the recording or in the concerts. The sessions from the new album were my favorites sessions for this reason.

What are your hopes and fears for the future of the Blues? Do you consider the Blues a music genre or it’s a state of mind?

There are two bright new stars on the blues scene. Kingfish for electric blues and Jontavious Willis for acoustic blues. The blues is in good hands with these two young men.

I miss the days when people bought music at record stores and when we could go to those stores and talk about music.

It's important to give 100 percent on the bandstand and to give the fans the songs they came to hear.

Some music styles can be fads but the Blues music is always with us. Why do think that is?

Because it’s honest and emotionally intense. 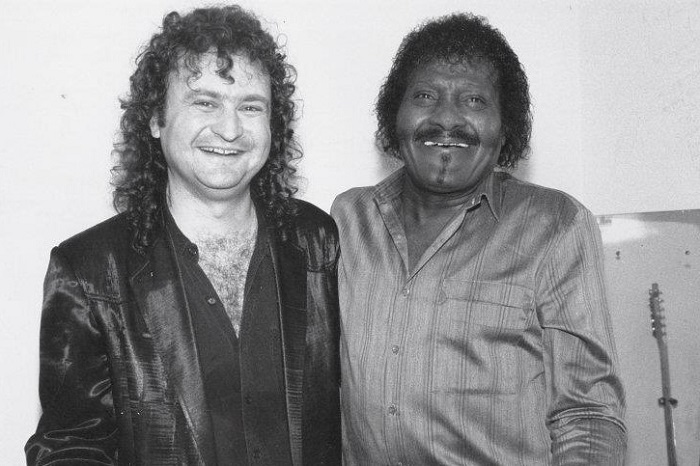 What does Blues and Southern Rock mean to you & what does offered you?

Blues is my biggest love but as a Georgia native, it’s my birthright to play Southern Rock.

Recording with producer Tom Dowd in 1996 was the best. When record label Capricorn records went out of business in 2000, right when my album for them had just come out was the worst.

Which memory from the Alley Cats and the late Chicago Bob Nelson & Heartfixers makes you smile?

The Alley Cats opening for Rory Gallagher for 2 nights in 1979 ... and Heartfixers first shows in New York City in 1983 after releasing live at the Moonshadow on Landslide records.

What are you miss most nowadays from the 70s and your first steps in music?

People went out and heard live music more then.

The digital era has made it too easy for people to get recorded music for free.

Of all the people you’ve meeting with, who do you admire the most? Which meetings have been the biggest experiences?

BB King - who I met when I was 14. He stood in the lobby and greeted all his fans as we left the concert. 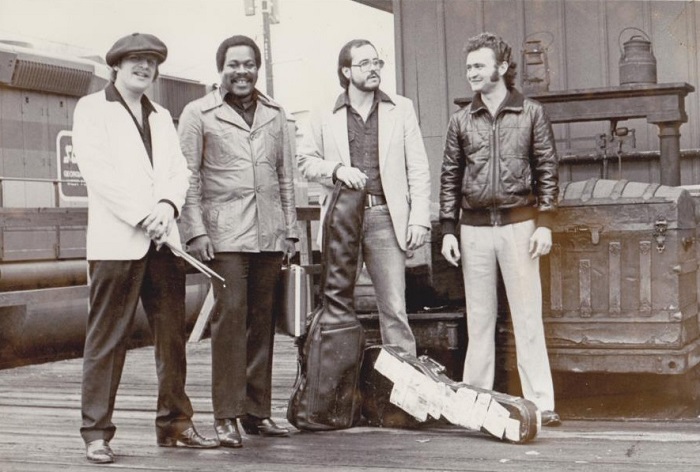 "The best album sessions and concerts are ones where the musicians are laughing and joking and then that vibe is captured in the recording or in the concerts. The sessions from the new album were my favorites sessions for this reason." (Photo: Tinsley Ellis with the Heartfixers)

I think the early years on the road with the Alley Cats and the Heartfixers were the most fun. We made no money but made some great music.

What is the line that connects the legacy of Southern Rock with Blues and beyond?

Both music forms came from the Deep South and spread out worldwide.

Blues music does not seem to impact these things as much as other music does. It's my job to entertain people not to change them.

I wish I could have been at the recording of BB King - Blues Is King live album. This is my favorite blues album right now.

Photos performing with the legends of the blues (Buddy Guy, Albert Collins, Lonnie Mack, Allman Brothers, etc.) all my albums that I’ve recorded. My 1959 Fender Stratocaster. 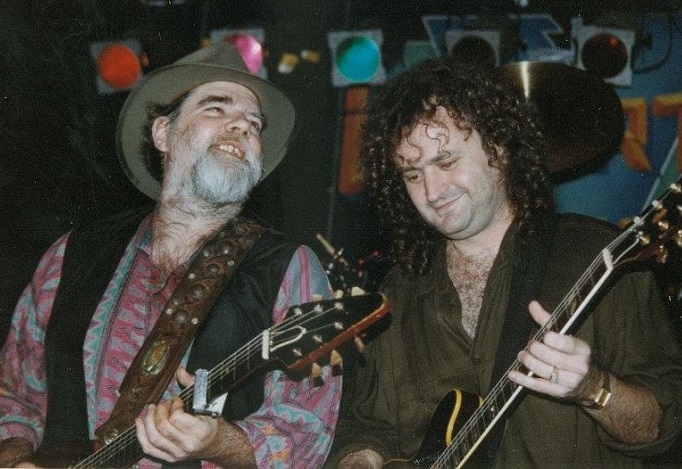 "I’ve had many personal challenges in my life, all of which have inspired the lyrics and mood of my compositions." (Photo: Tinsley Ellis & Lonnie Mack)

From the musical and feeling point of view what are the difference and similarities between “Get It” (2013) and the previous of it albums?

Obviously the biggest difference is that its an all instrumental album. The guitar playing and style of music however is very similar to all previous albums.

Do you know why Southern sound is connected to the Blues culture?

Because both have their roots in the American South.

Yes. And that is why I label my music Blues Rock.

John Hammond told me in 1982 to play under my own name and not a band name.

Me on stage with everyone smiling in the audience and on the bandstand. 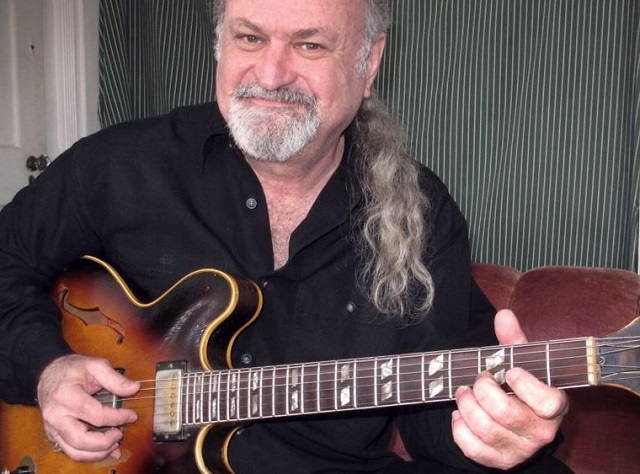