Italian musician Gianluigi Cavaliere talks about the literature in music, Chantango and the '70s prog-rock era

"Poetry in Music as I mean it, is a common and universal language which encompasses in sentiment all the peoples of the world: the fights, the joys, the defeats, the victories and the shared bursts for global Love."

After thirty years activity as a guitarist, singer, songwriter, composer, and producer, in 1998 Gianluigi Cavaliere founded the group "Chantango" (+ tango chanson), synthesis of years of research and experimentation. With Chantango, which is soul vocalist and "thinker", explores the language and poetry of great song writing (with particular reference to the masters chansonniers French) and the Argentine tango, and participate, alongside those five musicians talent and world renowned in many concerts in Italy and in France by inserting a good headline in the national and European songwriters and the choicest poetry in music. It takes part and promotes many tributes dedicated to composers such as Ferré, Tenco, Ciampi, De André, Bindi, Lazarev and radio RAI and other national networks on the subject. It translates and adapts music the French poets (Baudelaire, Ferré, Caussimon, Brel) and among others, the Italian poet Cesare Pavese. 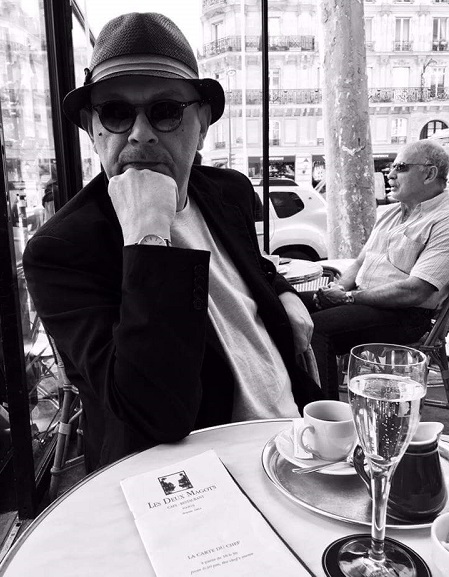 He works with the center "Léo Ferré" of San Benedetto del Tronto and associations dealing with the restoration and preservation of song writing. For several years he worked regularly with the poet, writer, director Mauro Macario. Under the auspices of the great poets of the exciting song, in 1999 Gianluigi Cavaliere brings together a small chamber group of exceptional musicians who, with the name Chantango begins to walk the path of poetry in music with the old and charming carriage of Tango. Since then the group is appreciated in prestigious places offering an original blend of musical and literary influences, creating its own repertoire and re-interpreting and promoting the work of the masters of the song first of all Léo Ferré. In 2001 he released the album "The Soul of Wine", where Chantango sings, among others, the verses of Cecco Angiolieri and Baudelaire. In addition to numerous concerts in theaters and squares in Italy and in Europe, regularly attends events in tribute to the great singer-songwriters. It is 2007, the new album "Bestiary of love", where Chantango relaunches its attitude towards poetry, sealing the well-established artistic liaison with the poet Mauro Macario in the song "Sam" (also included in his book of poems "Silence in the West"), and setting to music the poems of Cesare Pavese. Gianluigi Cavaliere was member of ENEIDE, a five-piece progressive rock band from Padova, started as ENEIDE POP back in 1970.

What do you learn about yourself from the poetry and world/Folk music and what does the blues mean to you?

Blues was the magic of my teens. Everything started from there: the first bands with friends, the first hired electric guitar and endless hours of amazing listening. The myths of the time, the music, the dreams, the tensions for life and the hopes coming on air from beyond the Alps. In the meantime clear signals arrived from the East, centred around the Beatles and the Rolling Stones, the Indian music and the rising Progressive Rock. All of the above expressed philosophical and intimist concepts which were bigger than us. Later, but much later I got to know poetry in music.

How do you describe Gianluigi Cavaliere sound/poets and songbook? What characterizes Chantango philosophy?

The project Chantango is the fruit of a needed research linked to the years between the great age of the so-called Progressive Rock and the “decadent” pause in music of the early 1980s. A rediscovery of my origins, an in-depth study on popular songs of the Old Continent and the following migrations, the customs and the poetic feelings toward South America and other shelters where our exported cultures were spreading. Besides, there was the historical recovery of the great existentialist songs which was raging from France and which, for natural transmission, converged to our great “Genovese” songs, the popular songs and the Opera, which my father made me “swallow” while my impulse was toward the British Rock, together with the Italian melodrama and the great Opera music of my (once) great country (Puccini, Mascagni, Verdi, etc.). So inevitably, all this assembly of “total music” led me to create a project which included all the souls belonging to my musical, human and cultural nature. "I believe the 1950s Paris would be my ideal destination, between Saint-Germain-des-Prés and Montparnasse. I often go to Paris and it’s a magic every time. In my imagery I find myself in Place Pigalle talking to Henry Miller and then at Café de Flore for a drink of Pernod with Ferré, Vian, Gainsboug, Brel, Greco, Sartre and all my beloved poets, men of letters and artists."

Which collaborations have been the most important experiences? Which memory makes you smile?

In the early 1970s, everything happened quickly for us Eneide band: from the beginnings in a parish club, to the ranks in ballrooms, to the great stages firstly as supporters of great names of the British scene: Van der Graaf Generator, Genesis, Atomic Rooster and others, then to collaborations with great artists of the Italian Pop scene of the time. Many are the memories kept tenderly inside but they are unspeakable for the density of the mystery which still holds such a magical and unrepeatable period.

What were the reasons that made Italy in 70s to be the center of Progressive Rock researches and experiments?

In the early 1970s Italy was in need of a change and in the youth music unaware contaminations were being experimented. The Hard Rock and the Progressive Baroque from England and the USA were primarily performed and re-elaborated filling them with our melodramatic baggage. From that, new bands such as PFM and Banco del Mutuo Soccorso were born plus others that re-interpreted and re-invented a new musical age. We were among them, young guys form the Venetian province: Eneide. We were off and excluded from the metropolitan areas of the great cities as Rome or Milan where everything was concentrated, but we were getting ready to be protagonists of an unrepeatable era devising a memorable album which was issued some years later: “Eneide / Uomini umili popoli liberi” (Eneide / Humble Men Free People”. Then we took part in several Pop Festivals and gigs in different situations of the Italian peninsula. It was a magical moment and there was a strong ideological energy and energetic propulsion where all the country was involved though unaware of it.

What do you miss most nowadays from the music of past? What are your hopes & fears for the future of poetry?

My future is the music of the “past”. Without an awareness of a historical origin there is no future and nowadays the “power” is forcing us to remove our history to make us slaves or robots. It wants us to remove the thinking thought and give space and way to amateurishness, minimalism. Still today I keep on writing and interpreting humbly the music and the poetry of the past that is the future. The word and the feeling of my thinking Fathers. Men’s history leads us to the beautiful inside and consequently to art. I am a fighting traditionalist!               (PHOTO: Eneide & Gianluigi Cavaliere c. 1970s) 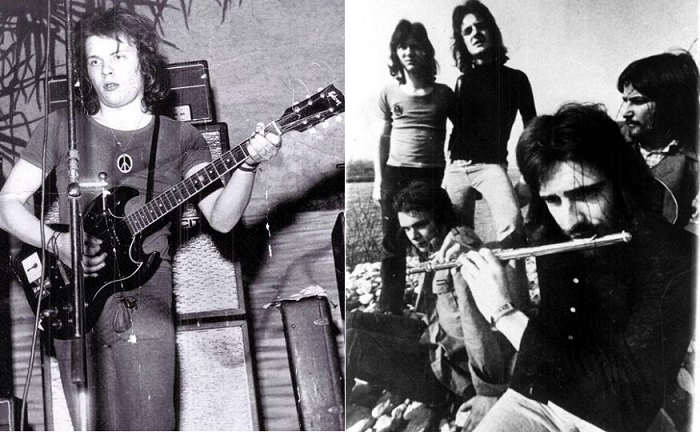 "Blues was the magic of my teens. Everything started from there: the first bands with friends, the first hired electric guitar and endless hours of amazing listening. The myths of the time, the music, the dreams, the tensions for life and the hopes coming on air from beyond the Alps."

What are the lines that connect the tango/ chanson with Jazz/blues and continue to Italian and classical music?

Real music, not the synthetic noises, has no bounds to contaminations. With Chantango I experimented the mingling of different musical languages: chanson + tango + classical music + popular song and, clearly, in addition all the baggage of all the band’s musicians: blues, jazz, melodrama and international songwriting. Everything flows and is serving poetry and the sung words.

What has made you laugh from Eneide and what touched (emotionally) you from the ‘70s era and ‘atmosphere’?

As I said before, the atmosphere of the 70s is not only a memory but the starting point of a musical and life adventure which I continue to perpetuate in what I am doing today with my musical writing, looking for new creative horizons all the time and also in my live performances. The early 70s were the moment of discovery. Sharing the stage and playing with great artists, being there with common goals because we wanted to “change the world” with music are memories. A lot of memories which infuse joy and huge tenderness.

What is the impact of music on the literature and the relationship to the racial and socio-cultural implications?

Literature in music is now my life project which I have been devoting to since discovering the Genius of 1900: Léo Ferré, the man, the musician, the poet who changed my life. The poetic word is music in itself and inserting it in sustainable melodies and creating with it a melodic language is a magical alchemy which takes me on as Love does. I have been putting poets in music for years. I translate and adapt to music the Poètes Maudits and I do concerts of literary songs sometimes helped by the poet/actor Mauro Macario, the great Léo Ferré’s brotherly friend. Poetry in Music as I mean it, is a common and universal language which encompasses in sentiment all the peoples of the world: the fights, the joys, the defeats, the victories and the shared bursts for global Love. I live in my musical world and as I said earlier I am a traditionalist. I live out of the contemporary reality, I continue to listen and read the classics. I don’t know and I am not interested in putting my nose out. Definitely I don’t want to be contaminated by this minimalist and Orwellian age. We have to get back, recover our reputation (a new virginity), talk about sentiment, let the heart sing and exalt talent but, unfortunately, I think it is too late for a historical and sociological rescue. Anyway, I keep on struggling as much as I can to stop everything being lost.

I believe the 1950s Paris would be my ideal destination, between Saint-Germain-des-Prés and Montparnasse. I often go to Paris and it’s a magic every time. In my imagery I find myself in Place Pigalle talking to Henry Miller and then at Café de Flore for a drink of Pernod with Ferré, Vian, Gainsboug, Brel, Greco, Sartre and all my beloved poets, men of letters and artists.