"Music will always be one of the best means to make changes and to spread it everywhere." 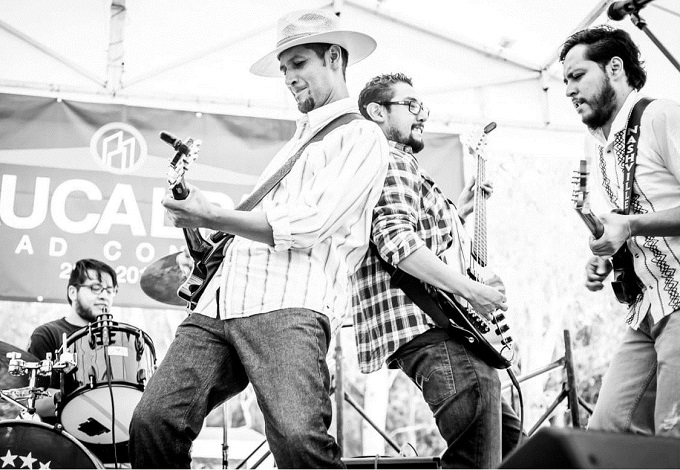 Gustavo Ponce (Lead Guitar): Self-taught musician in the beginning, and later taking private lessons until today. José Luis "James" García (Bass): Bassist, keyboardist and guitarist, self-taught from an early age, It also is deputy coordinator of events in the Cultura Blues Magazine, designer of the covers of the magazine Culture Blues and posters advertising events and founding member of AMBLUES project. Carlos "Black" (Drums): He Studied at the School of Music Rock to the Word (Escuela de Rock a la Palabra), directed by Mexican Bluesman Guillermo Briseño  Developing his percussive technique with renowned drummers: Alejandro Echenique and Juan Carlos Novelo.

What do you learn about yourself from the Rock n’ Blues music and culture and what does the blues mean to you?

Mainly it is the attitude, the people involved in rock and blues is identified by the attitude to life whatever the style, the lyrics are very important in the topics of the talk, and that creates people think and identify with bands, can be social, political, personal, sentimental, etc., the audience always identified with it and make it his own. So we have musical idols, besides the appearance and radiating energy makes you want to follow. The Blues for me is a reason for being, is identified with things, is the simplicity of the summed up in three chords life, you can take the quiet and dim side, but can also be aggressive and explosive side, it's a way of life.

What were the reasons that you started the Blue/Rock researches? How do you describe band’s sound and songbook?

When you're young, you get carried away by the rhythm and lyrics, when you become aware of how it sounds, as can happen things and where they come from, then you start looking for the origins: Who did it ?, as he did ?, I use ?, with it was ?, etc. It's a great therapy. We have a lot of influences and our sound comes from all of them, we have grown with an important and strange range of music, I am the oldest of the band and I grew up listening to the music of my father: Eric Clapton (Cream), Grand Funk, Eric Burdon & The Animals, Janis Joplin, Jimi Hendrix, Joe Cocker, Led Zeppelin, Black Sabbath, Deep Purple, I want an old vintage sound that is very organic. My companions are younger and although we agree on many bands I like, they also grew new generations of rock and metal, but all agree that the Blues is the essence of things, so we are together and we play it, so our sound is difficult to explain, it is a hybrid, a blend of the old with the new.

Our main repertoire is based on old songs with new sound, touch issues Otis Rush, Albert Collins, Raful Neal, Tracy Chapman, etc. But we have begun to venture into his own compositions. In our first album "Live Session" we include 2 own songs, the lyrics are my own and speak in the third person, situations that I see elsewhere not exactly that I go, it's like putting reality seen from behind sitting in an armchair, "Rolling Down" speaks of a "Homeless", every day I'm in my car I saw the side of the road with different and strange things, always with his faithful dogs with them, are people who never hurt anyone but has a hard life and yet always smile and it is rare to see them mourn, they say strange things and sometimes speak upside down, they know but try to survive. 'cause I'm crying speaks of "Someone" who did any harm to his wife and is now remorseful but does not know how to fix it and asked to return but cannot find, something that happens almost anyone you know? (Laughs). 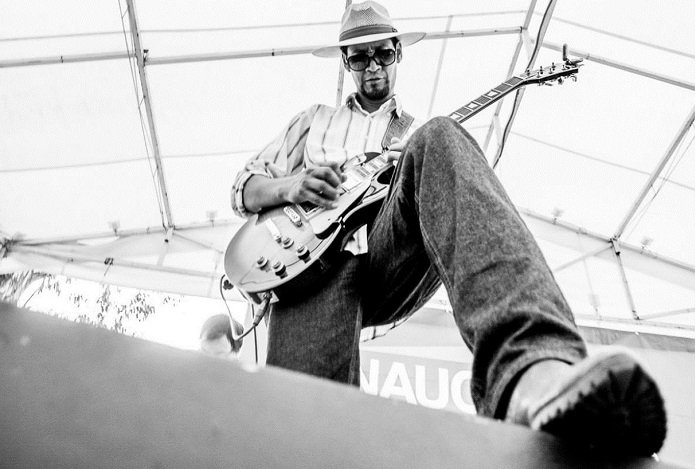 "The Blues for me is a reason for being, is identified with things, is the simplicity of the summed up in three chords life, you can take the quiet and dim side, but can also be aggressive and explosive side, it's a way of life."

Are there any memories gigs, jams, open acts and studio sessions which you’d like to share with us?

Each concert has something special, but two were particularly special, the first was in the very beginning where we were invited to play at the "Day of the African-American Heritage" at the Benjamin Franklin Library belonging to the American Embassy, and it was very especially because the then ambassador Anthony Wayne went to see us play, was very disturbing to know that the representative of the United States would be there, however it was a great concert and liked it a lot, almost always some celebrity as they are a couple of songs and they go, but not the whole concert was suggested some things and took pictures with us. The second moment was when we received the invitation to play in the 8th Jazz Festival and Blues in Zacatecas, had never played a show for more than 50 min. and was now a full show of 90 min., were many trials and preparation, but in the end the audience went crazy and it was great, well that trip brought us a lot as musicians, learn to live on the road and doing things together as a team

What do you miss most now a days from the blues of past? What are your hopes and fears for the future of?

Mainly the relationship, living together and sharing music with other musicians as such, there are pictures of SRV, BB King, Eric Clapton, as well as many other coexisting and playing, my dad talked me in the 70`s bands gathered in small clubs or houses to share and exchange music and ideas, posters were terrific and they all shared, and today the musician is more conceited and costs us share, the jams are to show who plays faster or stronger, no sensitivity and humility before others, everyone wants to touch but do not want to pay what it's worth your music and have good team effort. However the community of Blues in Mexico is small and we all know, I think this scene is growing and people dedicated to the blues is striving to keep alive this genre that we love so much, it will be put into practice the knowledge of past and transmit to future generations. The Blues will not die as long as the seed. "Like any other form of musical expression, the Blues is a great way to externalize what happens in a country like ours, as I said before, people identify with what is said in the songs and if it means an improvement as a society, as a person or change the economic situation, people sing songs in protest and change."

Make an account of the case of Blues in Mexico. Which is the most interesting period in local blues scene?

For me the most important period was during the time of the 70´s, the US influence in Mexico was important and were many bands like El Ritual, Peace & Love, Love Army, Three Souls in My Mind, Dug Dug's Javier Batiz, Santana and many more, the influence of Blues Rock was there 100%, the band were not famous made their effort to touch everything they heard, my father had his own band in the 70's copying Blues all those styles, and many more like him, there was a decline of the genre for about 10 years and retook boom albeit "underground" in the '80s with bands like Guillermo Briseño, Betsy Pecannins, Follage and Real de Catorce, They were the best known. Now again there is a renaissance with young and old people and the scene is small but increasingly people who come to enjoy this musical style there, and Estacion Monrovia is in there.

What are the lines that connect the legacy of Blues from United States and Europe to Mexico?

The proximity of the border with the United States makes things easier, but not with Europe, but is now very easy to access the history and learn more about Blues bands in both countries, the internet makes things much easier, but it makes a 30- 40 years was difficult, the bands could not play as now anywhere and that could relate to this sector he was responsible for "spreading the word" people, and thus was known Muddy Waters, Janis, Hendrix, Zeppelin, Fleetwood Mac, Mayall, Green, Taylor, Yardbirds, etc. Now everyone can access the story to a click, to know a little more of our favorite artists wherever they come from or have been born.

What has made you laugh lately and what touched (emotionally) you from the local circuits and industry?

It makes me laugh that invite us to events of great promotion, but do not want to pay and think that one is improvised, it's funny but also bothers me a lot. And something that touches me emotionally is that because of our album "Live Session" increasingly more interested in the band and we have more interviews, invitations to play and even appeared our theme "Rolling Down" on a cd for a magazine, and good now that you have invited me to participate in your project through this interview excites me and makes me very happy. 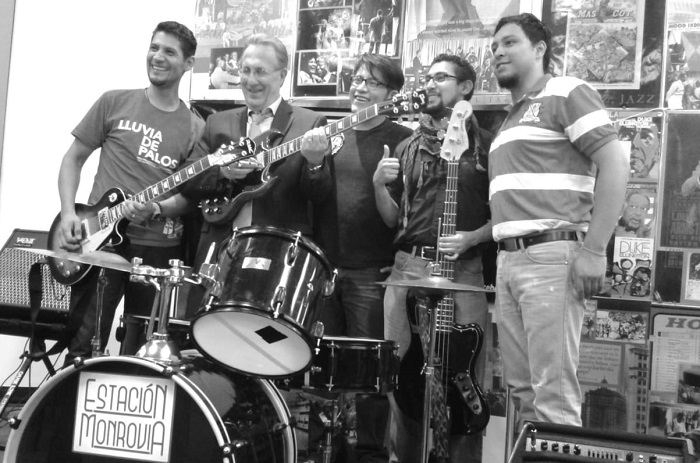 "However the community of Blues in Mexico is small and we all know, I think this scene is growing and people dedicated to the blues is striving to keep alive this genre that we love so much, it will be put into practice the knowledge of past and transmit to future generations."

Of course!, mainly traditional music "Ranchera" (Mariachi), form of composition is very similar to the Blues, the verses can be sung in a traditional blues no problem, this style of Mexican music also carries a "Call- response "to solve common situations and heartbreak, but is not the same repetitive structure of a traditional blues at the beginning of this, if appropriate to resolve in symmetrical lines.

Like any other form of musical expression, the Blues is a great way to externalize what happens in a country like ours, as I said before, people identify with what is said in the songs and if it means an improvement as a society, as a person or change the economic situation, people sing songs in protest and change. Music will always be one of the best means to make changes and to spread it everywhere.

At least in Mexico, there is a culture of the importance of the arts in all categories, arts expand sensitivity to the world, one finds the answers to oneself through the senses, and for me music and Blues are the answer, music lessons should be mandatory in schools since first grade, we know that introverted people are geniuses in their artistic works call it painting, sculpture, literature or music, is the true way to express oneself. On the other hand, we can return to Jimi Hendrix and SRV?, ok no.

Definitely "WOODSTOCK" whole musical expression at its best, possibly have not been all the bands I like, but enough to hallucinate the whole day, well three days. 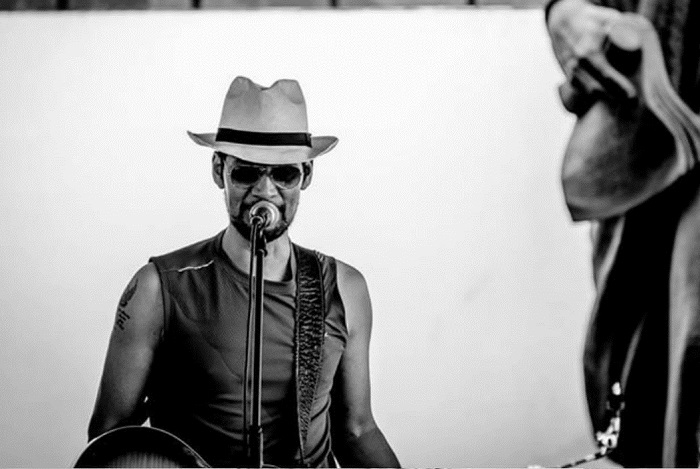