"I think that in general the Beats were attempting to change consciousness, their own and the world’s, to a wider field, as it were, as wide as possible, without boundaries." 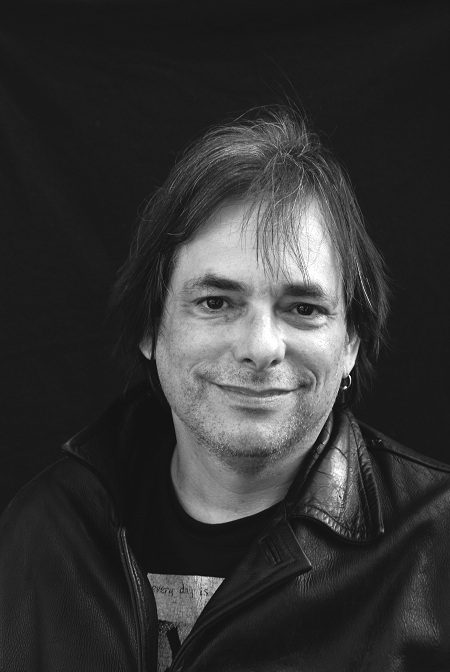 His work includes two books, MILKY DESIRE (Subterranean Press, 1991) and RÉSUMÉ (Inevitable Press, 1998).
He has also made two short films, BURROUGHS ON BOWERY, a portrait of the NAKED LUNCH author, and AMERICAN MUTANT, with Burroughs, Ginsberg & Timothy Leary. His latest film project, THE COUNT, stars Dion Olivier, lead singer of Late Young.
In the 1980s, Olmsted’s band The Job was part of the San Francisco New Wave, playing the Mabuhay and other local clubs of the day. Allen Ginsberg, taken with the punk scene, performed his poem “Birdbrain” with their backup on a number of occasions. Olmsted appeared at the L.A. Ginsberg Memorial along with Tom Waits, Exxene and Johnny Depp.
His book, WHAT USE AM I A HUNGRY GHOST? - POEMS FROM 3-YEAR RETREAT (Valley Contemporary Press, 2001), has an introduction by Ginsberg. Olmsted is a senior student of Lama Tharchin Rinpoche.
Olmsted has studied Buddhism since 1974 and completed a 3-year retreat supervised by his teacher. Afterwards, he was encouraged to teach in the San Francisco chapter of Tharchin Rinpoche's students, Last Chance Gompa. It is now established across the Bay in Oakland.
Marc Olmsted's current book project is DON'T HESITATE: 23 YEARS KNOWING ALLEN GINSBERG, a memoir including their correspondence. He has lectured teaming up with Anam Thubten Rinpoche at Naropa University and UC Santa Cruz.

When was your first desire to become involved with the “Beat Family” and poetry?
My brother Ross, 12 years my senior, was a Venice Beach, CA “beatnik” and later hippie and I read one of his friend’s poems which imitated “Howl,” though I didn’t know it.  I was probably 13 (1967).  Ray Bradbury and Poe were laid on me by my dad growing up so I could hear or ‘see’ the surrealist metaphors right away.  Later, I saw where it came from and I was instantly converted.

From whom have you have learned the most secrets about the Beats, poetry …and life?
Beats, poetry: first Buddhist meditation intro would be Ginsberg, who taught me “first thought, best thought,” and how to sit.  In terms of Buddhist practice itself, that would be my teacher Tharchin Rinpoche and his and my mutual teacher, Thinley Norbu Rinpoche.

What experiences in your life make you a GOOD musician, poetry …and person?
I’m not a good musician, so maybe we can say effective artist, or helpful person, which is an aspiration rather than an accomplishment – but what comes first is Buddhist practice, then alcoholic recovery, then finally getting lifelong clinical depression diagnosed and a decent anti-depressant for it.

Poetry and music…can these two arts confront the “prison” of the spirit and mind?
Sure!  Sure!  That’s how I started meditating, or taking on a cheerful attitude in the midst of such abject suffering.  Some sort of sacred view and compassion.  The Beatles and Ginsberg. 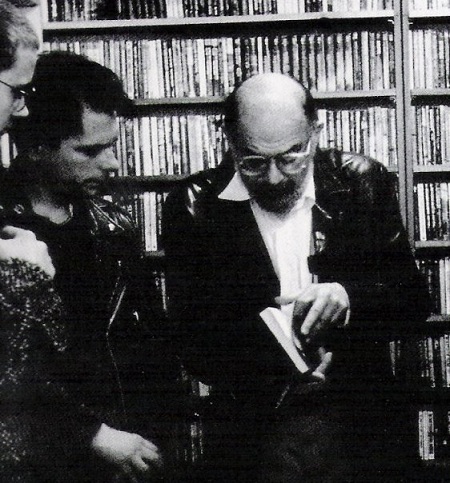 Are there any memories from Allen Ginsberg, which you’d like to share with us?
We were lovers for 6 years.  That says a lot right there.  Not that either of us were exclusive.  And I liked girls more than men.  But he was a very sweet man.  The sweetest, really.

How does the music come out of Allen’s words?
I think you must be referring to our version of “Birdbrain”, or rather my band The Job’s version.  We made up a totally different tune, a collaboration.  The original was kinda like the 1960s TV Batman theme, and my band hated that.  So we did a wigged out version and my only real contribution was the purposely off-key Devo-esque backup refrain: “BIRDBRAIN!”  Afterwards, Ginsberg said, “I don’t understand your aesthetic.”  He went along with it, but he thought it should be some sort of pop song, easily digested.  But in 1980 we were interested in deconstruction, or scrambling of codes and genres.  Like Devo’s version of “Satisfaction,” though that was 1977 and by 1980 they were already going pop, like Blondie was going pop (or perhaps always was).  But the Talking Heads were still experimenting, we liked the experiments.  I liked the Industrial bands, though I didn’t really figure out how to do it until much later.  “blind-worm cycle” is the name for my post-Job band (named from magician-artist Austin O. Spare’s text), and we did the “American Mutant” score.  That was mostly Dion Olivier of the band Late Young.  But I digress, as they say.

How important was the role of Allen and the Beats played in the case of Buddhism in US?
Incredibly important.  Kerouac especially.  Without Kerouac, Allen might not have been caught up.  Snyder, Whalen, di Prima would have found Buddhism on their own, as they did in fact, but they all played roles in making it American.  And popular in the sense of a viable form of disciplined mind investigation - tried by these pioners and found to work. 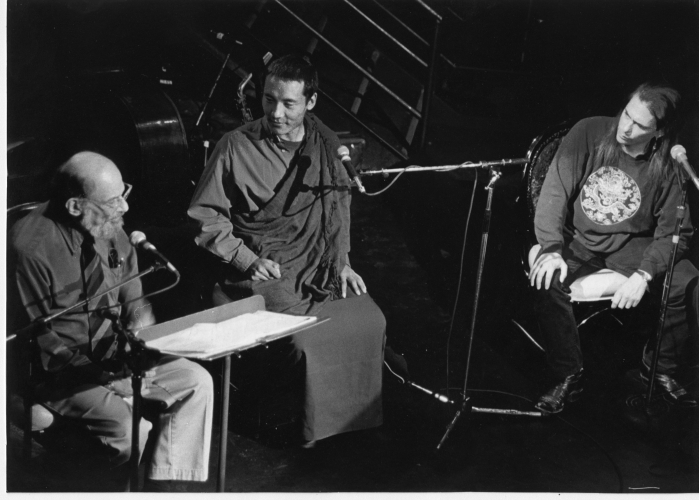 What is the “thing” you miss most nowadays from the Beat “family”?

I mostly miss Ginsberg’s take on the culture, particularly the political world situation.  It’s hard without his input, very hard.

I think that in general the Beats were attempting to change consciousness, their own and the world’s, to a wider field, as it were, as wide as possible, without boundaries.  And at the same time, this was grounded in some sort of empathy for the underdog, or helpless animals, or even big evil dictators and moguls who were prisoners of their own mind or greed.  And the main thing is the language – whether Burroughs, Corso, Ginsberg, di Prima, Kerouac, McClure, Snyder, Bob Kaufman – really pushing that so it would reflect or change this emerging consciousness.  So the form is still very current, fresh.  And the desire to change the world obviously is something that is still important.  For the benefit of all sentient beings. 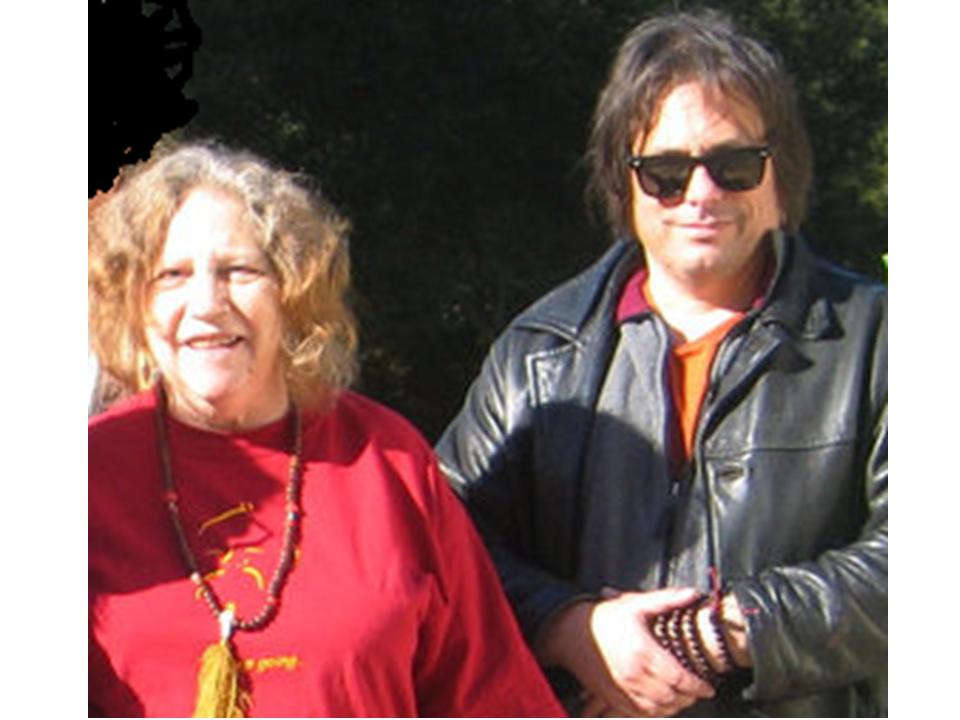 Do you remember anything funny or interesting from the AMERICAN MUTANT?
Tim Leary was nearly impossible to direct.  He thought he had to grin into the camera if there was a camera.  I almost gave up.

Which memory from William S. Burroughs makes you smile?
When he laughed during Burroughs on Bowery when I showed it to him in 1978.  Then he said, “Great movie, Marc,” after that funny evil, closed-mouth “mmmmm, hmmmm, hmmmm” laugh throughout the 4 minute movie.  No one else thought it was funny up til then, except maybe Richard Modiano, my closest friend.  And me, of course.  In fact, the movie was HATED by my film school, San Francisco State University.  They voted not to include it in the Film Finals of that year. 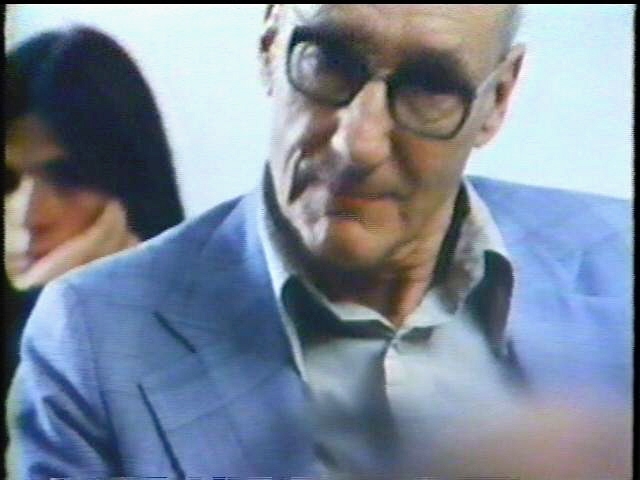 How did the idea of BURROUGHS ON BOWERY come about?
Craig Baldwin was a big influence, an avant garde or experimental filmmaker that I was in school with.  He showed me this industrial machine for screening Super 8 movies to workers at one’s company.  Remember, there was no videotape then, we’re talking 1976-1977.  So you could hook up TV monitors wherever and just show your movie through it throughout the company.  But the punk aesthetic was really coming in, the Xerox of Xerox of Xerox flyers for bands starting to show up, shooting off the TV etc.  Liking how images degenerated.  So my intention was to film some Super 8 original footage and then just develop it, run it through the TV monitor, shoot THAT, run THAT through the monitor, shoot 2nd and 3rd generation or degeneration footage, go in for close-ups where there had been full shots, etc. but it didn’t occur to me to do it with Burroughs until I met him and he said “yes.”

Who from THE BEATS had the most passion for the Blues & Jazz?
Seems like Kerouac understood it best.

Which of historical personalities would you like to meet?
I never met Kerouac or Neal Cassady.  I’d like that.  I never met Brando or Orson Welles.  I never met Dudjom Rinpoche or Dilgo Khyentse Rinpoche.

What would you say to Jack Kerouac?
Jack, you gotta stop drinking.  It’s a horrible way to die.  Let’s go to a 12-Step Meeting. 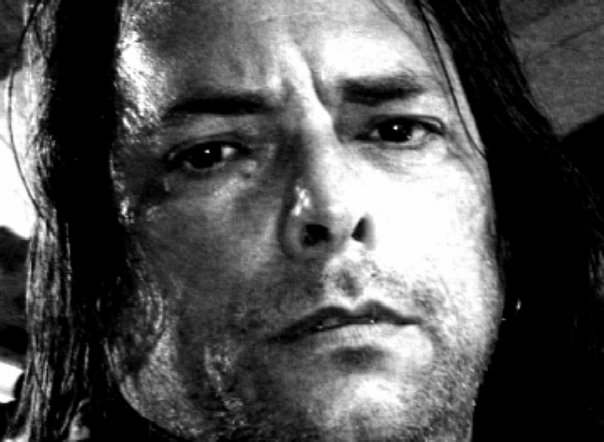 Do Beatniks played an important role to the youth today?
“Beatnik” was originally a pejorative term, though there is evidence that it’s in-print creator, San Francisco columnist Herb Caen, actually heard it on the street from a raving Bob Kaufman.  But I do see a lot of young people interested so there is that influence, and ironically, with the heavy emphasis of hip-hop in our modern youth culture, Beat writer Leroi Jones aka Amiri Baraka may have the widest impact right at this moment, because he created the poetic style that morphed into Gil-Scott Heron and also the Last Poets, the real precursors of rap.

What is your “secret” DREAM…and what is your nightmare?
Of course I wanted to be famous, but I’m almost 60, so maybe when I’m dead – hopefully it will benefit, my pilgrim’s progress, not like I’ll know.  My worst nightmare is probably that I’ll lose my way.

Which is the most interesting period in your life and why?
I’d have to say now, because my Buddhist practice deepens because of…well, practice…so that is the most interesting element of my life, that deepening inspiration from just keeping at it, studying with my lama.  And I have a very good companion, my wife Suzi, also a writer. 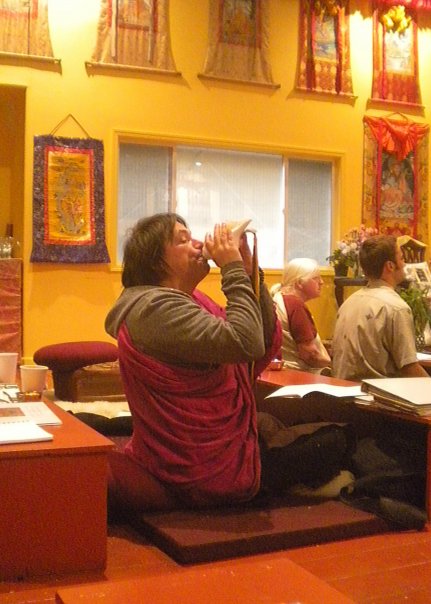 Are there any memories from with Lama Tharchin Rinpoche, which you’d like to share with us?
So many, too many to tell, they just flood in.

What advice Rinpoche has given to you?
I told him, or warned him that I was very ambitious as a writer, I wanted him to tame me.  He said, “Be a great writer like Milarepa.”

If you go back to the past what things you would do better and what things you would a void to do again?
I hate any mean thing I did.  I hate that I killed bugs and rats and mice with traps.  I took way too many drugs.  I’m sorry I didn’t resist my then-girlfriend’s desire for an abortion.

When did you last laughing (and cry) and why?
I laugh a lot.  So today.  But I just lost my last sister to death, and the tears just feel locked in my chest.  I’m waiting on them to come out.  Easier to weep with joy or devotion, or even in a movie – maybe easiest in a movie.

What MOTTO of yours, you would like to stay forever?
All sentient beings have been your kitten.

How you would spend a day with Buddha Sakyamuni?
I’d just sit there and take him in.

What would you like to ask Guru Rinpoche?
“What should I do now?  Is there any point to trying to carry the Beat torch or am I duping myself?”