"The Blues is bound to the slavery, the segregation, these musicians evolved in inhuman living conditions, the White had power of life and death over this Afro-American population, How many lynchings for a badly put look or a word of fault."

Welcome to Home of Blues

Jacques Garcia (aka Black Jack) is the founder and president of Black Jack Blues Association in France. Black Jack, since the beginning of the 80s, within the framework of our various implications around the Blues (Salaise Blues Festival, Rhesus Blues Productions, Broadway Records, Au Mi'Lieu du Blues in Ampuis, exhibition Du Blues et des Hommes and other punctual events. Garcia’s new project is the European Blues Museum: “After an a little bit long gestation, the important is to realize the dreams. A new important project is coming in Châtres sur Cher, in a building of about 400m2 on two levels.” This global project will come under the naming: HOME OF BLUES, which will include a Blues club and the European Blues Museum. “Great for our project to have the support of Bobby Rush because he represents this generation which made a major contribution to Blues, Southern Soul, Funk, and Roots music, as the King of Chitlin’Circuit.”       (Photo by Jean-Paul Pichon) 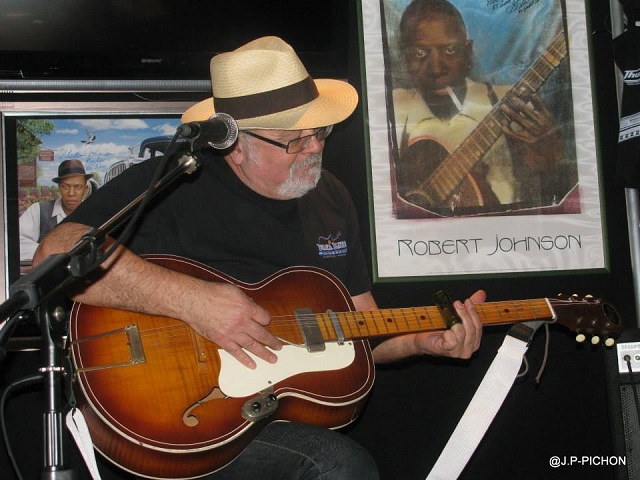 Also the bluesman David Evans will be a supporter: “On the occasion of an European tour, during his passage in Paris, I was able to organize a meeting with David Evans, to present him in detail the project «The Home of Blues». Indeed, there is already a few years, when I had evoked with him the idea of this project, he had strongly encouraged me to realize it.” David Evans, living in Memphis, be a member of these people who dedicated their life to the Blues, by making a major and all over the world recognized contribution. Ethnomusicologist at the University of Memphis since 1978, and today to retirement, producer of the Label of the university High Water Recording. The project started, but we need supports of all the people who are interested in the Blues. This collective work is going to build all together. Your support can be determining with the future financiers which can measure the impact of the project on the territory, but also on the international stage. Take a place in this project! The carriers of the project are Jacques & Anne Marie Garcia.

What do you learned about yourself from the blues music and culture? What does the blues mean to you?

The Blues it is a state of mind, the expression of the happy or unfortunate facts of the everyday life, but if we place the birth of the Blues at the beginning of 1900 in the context of the segregation, it was more the misfortunes which were sung. The Blues and its culture built me on two major plans, the first one in the pleasure to listen this music which will influence height of the other currents and the second to beat me against the racial and social disparities.

How started the thought of European Blues Museum? What touched (emotionally) you from the European scene?

It has been well one decade since I have in mind this project because in the course of my journeys and meet, I constituted a rather important collection which I wanted to share most with many people and then there was no Museum of the Blues in Europe. That is going to be called European Museum of the Blues by its location but we shall present many things coming from the United States and Bluesmen which I was able to meet in various opportunities. Obviously, French bluesmen and Europeans will also be for the honor, because they also made a not insignificant contribution to the Blues. 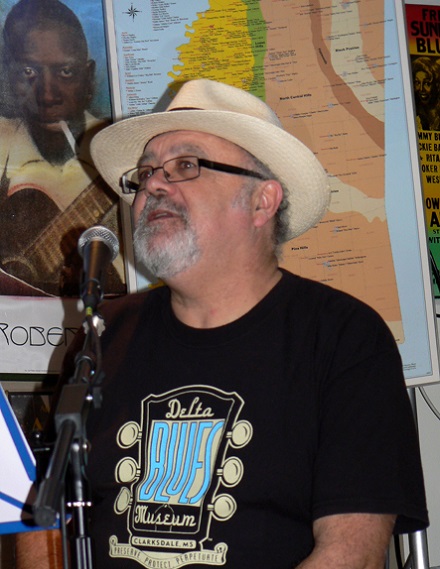 Black Jack Blues Association is at first the legal structure of The House of the Blues and then the medium in the activities proposed in this frame: Club of Blues, exhibitions, animations with the school, conferences. It is this association which will take care, by means of financiers and of donations, of the renovation work of the Building and of the arrangements of the Club and the Museum. All those who participate in the project are and will be voluntary, all the collected money will go only to the realization of the project.

When I created a festival of Blues towards Lyon in 1984 (Salaise Blues Festival) whom I programmed during eight years and which still exists this day, I was attracted by more knowledge of this music and these artists. For that reason I created with a partner Rhesus Blues Productions at the end of the 80s and organized by the European tours with American Bluesmen, I wanted to participate in the highlit of the Blues in Europe. These meetings with great attaching Bluesmen tempted me to meet them in their environment. And it was in 2004 when I would go for the first time in the Mississippi, to visit RL Burnside whom I had made turn and to whom I had promised that he would be the first one that I would visit.

The most beautiful memories were the meetings with Bluesmen that is in France, on the tours or at their home eux (RL Burnside, Johnny Shines, Jessie Mae Hemphill, Philipp Walker, Bobby Rush, Joe Louis Walker, Terry Harmonica Bean, Johnny Heartsman…) the list is too long. But it is necessary to say however it is because of a Louisiana guy, Bobby Michot, that we go to Louisiana and then in Mississippi. The welcome in Louisiana was enormous, what tempted us to return in the South every year and also in the bordering States.

What do you miss most nowadays from the blues of past? What are your hopes and fears for the future of?      (Photo: Jack & Willie King) The history of the Blues which spelt these last 120 years leaves a musical and social inheritance incredible. It is obvious that we cannot find the same feelings as we had been able to have by discovering mythical characters as Muddy Waters, BB King, John Lee Hooker and more. It was a time or thousands of people played the Blues, in plantations, juke joins,  streets, bars… The Blues was everywhere. New musics were created, often from the Blues, more attractive and more modern, but the Blues remains still strong with heights of groups which play the Blues all over the world. But we shall never find the sensations of front. I remain optimistic on its future, maybe more in Europe than in the United States, even if it seems that the Blues is a little more taken into account with Mississippi Blues Trail plates and the hatching of numerous Museums, among which the last one, the National Blues Museum of St Louis.

I find that the Blues in France goes not bad, there is an important Blues with quality artists. Many accompany American Bluesmen, who allows us to see evolving quite a lot of people. We have so many festivals which resist in spite of the cultural financial limitations. Since the 80s, we have very good representatives of the Blues. Italian and Spanish  Blues scenes  are not so bad too.

What are the lines that connect the legacy of Blues from United States to Europe? What are the differences?

It would be completely useless to compare the American and European Blues. The context is completely different, that we lived the men who played the Blues on each side of the ocean are not comparable. On the other hand, Europe played a complementary role the universality of the Blues. Let us remember the big tours of the 60s with all the best of the Blues of the period, while the Blues was at the trough of  a low ebb. The arrived of the big groups  of Rock’n’Roll (Led Zeppelin, Rolling Stones, Chuck Berry, Ten Years After, Cream and a lot of more) who)drew the inspirations from the Blues, even if we realized it that later, in any case as for me. Obviously that it is necessary to denounce the abuses on the appropriations of Blues papers by blacks who will never see any royaltie, but I think that nevertheless it, Europe made a contribution to the recognition of the Blues of the origins, thanks to the distribution of this new music. 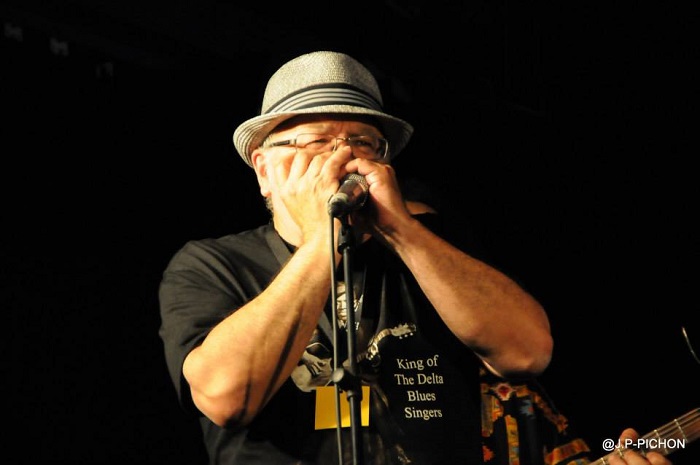 "The Blues it is a state of mind, the expression of the happy or unfortunate facts of the everyday life, but if we place the birth of the Blues at the beginning of 1900 in the context of the segregation, it was more the misfortunes which were sung." (Photo by Jean-Paul Pichon)

If you could change one thing in the Blues ‘world’ and it would become a reality, what would that be?

At my level not much, but my small contribution by setting up this project will make a small contribution. Let us continue to program Blues music, to form young musicians and to broadcast more and more this music.

The Blues is bound to the slavery, the segregation, these musicians evolved in inhuman living conditions, the White had power of life and death over this Afro-American population, how many lynchings for a badly put look or a word of fault. They had a lot of merit and I think that the music was their only comfort with maybe the religion. The often nonviolent fights which led the Afro-Americans are remarkable, which courage they had. Unfortunately the history with tendency to repeat it and the problem is far from being adjusted, new forms of segregation are in position), in particular in the public schools which become schools for the blacks only. What Barack Obama was not able to check, will develop with the administration Trump!

If I had the possibility of travelling in time, I think that I would have liked living a few months in studios Chess and spending time with these big Bluesmen Who came to record the biggest titles of the Blues and to spend a few days with Muddy Waters, One of my favorite Bluesmen. If I had the possibility of moving forward in time, it would be the inauguration of the European Museum of the Blues together with Bobby Rush and Cedric Burnside (the Honorary presidents) and all our supports and the friends.