Prolific cartoonist Bill Griffith talks about the underground comix of the 60s & 70s, music and Zippy

"A new generation needed new comics. What Robert Crumb did in 1967 was to reclaim the comic book form for new cartoonists who wanted to revive it and aim it at an adult audience."

Bill Griffith: The Strips of Underground

William Henry Jackson Griffith is a prolific American cartoonist who signs his work Bill Griffith and Griffy. He is best known for his daily comic strip Zippy. The popular catchphrase "Are we having fun yet?" is credited to Griffith in Bartlett's Familiar Quotations (16th edition, 1992). Born in Brooklyn, New York, Griffith grew up in Levittown, Long Island, where one of his neighbors was science fiction illustrator Ed Emshwiller, whom he credits with pointing him towards the world of art. Griffith began his comics career in New York City in 1969. He was a prominent cartoonist in the underground comics movement based out of San Francisco in the late 1960s, and co-founded the comics anthology Arcade, the Comics Revue with Art Spiegelman. His first comic strips in the East Village Other and Screw featured an angry amphibian named Mr. The Toad. 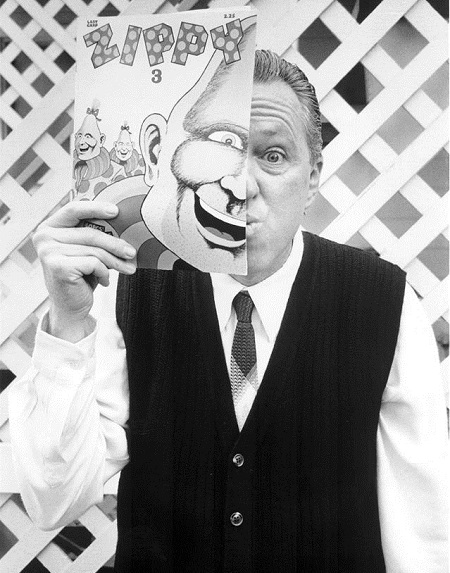 He ventured to San Francisco in 1970 to join the burgeoning underground comix movement. His first major comic book titles included Tales of Toad and Young Lust (co-created with cartoonist Jay Kinney), a bestselling series parodying romance comics of the time. He co-edited Arcade for its seven-issue run in the mid-1970s and worked with the leading underground publishers throughout that decade and up to the present: Print Mint, Last Gasp, Rip Off Press, Kitchen Sink and Fantagraphics Books. He contributed comics and illustrations to a variety of publications, including National Lampoon, High Times, The New Yorker, The Village Voice and The New York Times. In 1998, Griffith moved from San Francisco to Connecticut. His studio is in East Haddam, Connecticut, where he lives with his wife, the cartoonist Diane Noomin. The first Zippy strip appeared in the underground Real Pulp #1 (Print Mint) in 1971. The strip went weekly in 1976, first in the Berkeley Barb and then syndicated nationally through Rip Off Press. The one-row format Zippy strip debuted in the Berkeley Barb in 1976 and continues in weekly newspapers to this day. In 1979, he added his alter ego character, Griffy, to the strip. In 1982, the "Zippy Theme Song" was composed and performed, with lyrics by The B-52s' Fred Schneider and vocals by Manhattan Transfer's Janis Siegel. Also on the cut are singers Phoebe Snow and Jon Hendricks. The daily Zippy strip (syndicated by King Features to over 200 newspapers worldwide) started in 1986. In 2007, Griffith began to focus his daily strip on Zippy's "birthplace", Dingburg, and next year, Griffith presented a talk on Zippy at the University of Michigan at Ann Arbor. In it, he laid out his "Top 40 List on Comics and their Creation", which since then has been reposted on numerous comics websites. For a short period, Griffith joined the team of artists, including Kim Deitch, Drew Friedman, Jay Lynch, Norman Saunders, Art Spiegelman, Bhob Stewart and Tom Sutton, who designed Wacky Packages trading cards for the Topps Company. Griffith recently drew Wacky Packages Old School Sketch Cards for Topps.

What were the reasons that you started the artistic, social, underground and political searches and experiments?

In the late 1960s, there were basically two kinds of comic books in the U.S.--superheroes and kid's comics. Both were aimed at a mainstream audience, so both were restricted as to the subject matter they could deal with. In addition, both had no overt sexual content and almost no political intent. "Mad" magazine did deal in social satire, but in a relatively mild way. But social upheaval was in the air at this time and Underground Comix were ready to be born. A new generation needed new comics. What Robert Crumb did in 1967 was to reclaim the comic book form for new cartoonists who wanted to revive it and aim it at an adult audience. 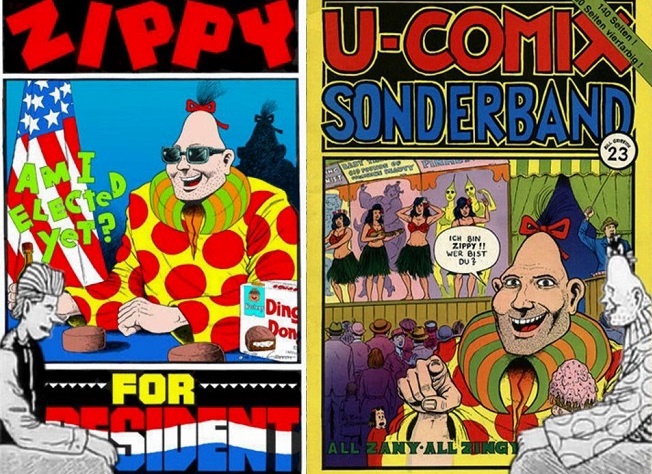 What characterize the philosophy of Bill Griffith’s comix? What experiences have triggered your ideas most?

Like the other Underground cartoonists of my time, I was interested in breaking taboos and lifting the restrictions of censorship. I just wanted to write and draw whatever I wanted, without "society" telling me what to do. There was no "philosophy" beyond that desire.

What has been the relationship between music & activism in your life and art? How does affect your inspiration?

Activism? My "activism" stopped when I started doing comics. Before then, I marched against the Vietnam War, but was not really politically active.

My first musical influences came from the "folk revival" of the early 1960s---Joan Baez, Bob Dylan--and their musical heroes, Woody Guthrie, early blues...I started playing the guitar at the age of 16 (1960), imitating Joan Baez, mostly. A few years later, I bought the first Dylan album and loved it. I also loved it when he added electric guitar and blended folk and rock. I once heard him perform in New York (where I lived), a few years before he released his first album. Also, around this time, a friend of mine played early jazz records for me--Bix Beiderbecke, Jelly Roll Morton, Louis Armstrong--and I loved that stuff, too.

Today, I listen to all kinds of music---a lot of it on Youtube. Classical, jazz, 1950s and 60s rock, weird stuff, new stuff. Before I started doing comics (1968), I listened to classical music while I painted---Mozart, Haydn, Beethoven. Also Erik Satie. Music doesn't directly inspire my comics--but it generally helps along the creative process.   (Photo: Bill Griffith, San Francisco 1995) "In the late 1960s, there were basically two kinds of comic books in the U.S.--superheroes and kid's comics. Both were aimed at a mainstream audience, so both were restricted as to the subject matter they could deal with. In addition, both had no overt sexual content and almost no political intent."

When I was a student in art school (Pratt Institute in Brooklyn), one of my teachers was Richard Lindner, a well-known painter. He was probably around 65 when I knew him. He said something that made a big impression on me... Looking at one of my paintings, he said, "You will be an artist one day." So I dropped out of school and went to Europe for 6 months.

What are your hopes and fears for the future of comix? What do you miss most nowadays from the art of past?

Comics are in their second (or third?) Golden Age today. Just look at the shelves of graphic novels and graphic memoirs. (Ignore the manga and superhero junk).

"Special Exits" by Joyce Farmer, "Can't We Talk About Something More Pleasant?" by Roz Chast and anything by Kim Deitch or Charles Burns.

What are the lines that connect the legacy of underground cartoonists of 60s with the new generation of artists?

With the exception of manga and superhero comics, ALL of today's cartoonists owe a lot to the Underground Comix of the 60s and 70s, most notably, R. Crumb, Art Spiegelman, Gary Panter, Kim Deitch and (if I may be immodest), myself. We reclaimed comics as a means of personal expression after decades of commercial, profit-driven comics like Marvel or DC. 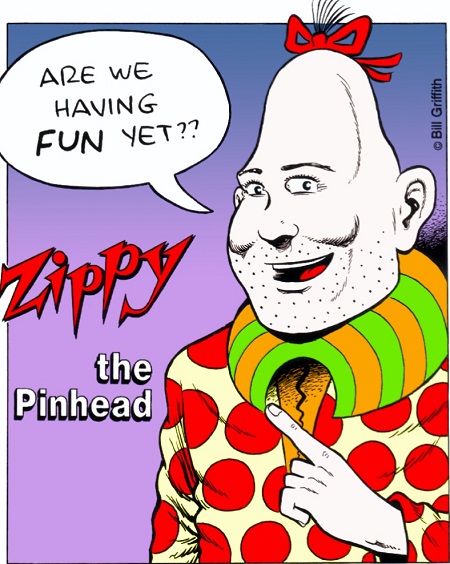 An end to organized religion would make the world a better place.

"Like the other Underground cartoonists of my time, I was interested in breaking taboos and lifting the restrictions of censorship. I just wanted to write and draw whatever I wanted, without 'society' telling me what to do. There was no "philosophy" beyond that desire."

I'd love to go back to the late 1940s in New York City. I'd wear a tie & suit every day and work in the offices of the Herald Tribune, doing a daily comic strip and eating lunch every day at the Automat (Google it).

How you would spend a day with Zippy?

Eating a dozen donuts while inside a car wash.