Q&A with active Folk and Blues musician, Israel-based Del Goldfarb, has acted as a Blues historian over the years

"We learn about life and how to roll with the punches. And no matter how bad things seem to be, you are not alone. Blues is your family."

Del Goldfarb writes of a singular life which carried him across the USA for years, before expanding his trails to include Europe, Israel and elsewhere. Among his accomlishments, and in addition to his role as an active Folk and Blues musician, Israel-based Del Goldfarb has acted as a Blues historian over the years, here are some highlights: Founded the first Waterfront Blues Festival (originally Rose City Blues Festival) in 1987, produced first five festivals presenting artists such as James Cotton, Charlie Musselwhite, Elvin Bishop, Jessie Mae Hemphill, Johnnie Shines, Lowell Fulson, John Lee Hooker, Bo Diddley, John Mayall, Frank Frost and many others. Submitted presentation of the washtub bass (on behalf of Fritz Richmond) to the Smithsonian Institute. Music provides a way to connect with the world and to digest what is happening around us.

What were the reasons that you started the Jerusalem Jazz and Blues Hall of Fame? How do you describe your mission?

I have always believed in giving credit where it is do. And I am one of those mavens whose holy mission in life is to turn you on to somebody worth a listen.

Which acquaintances have been the most important experiences? What touched (emotionally) you from Gus Cannon's music?

I’ve been lucky to know many people, but the most unique was Fritz Richmond, jug and washtub player, of whom I worked with for twenty years or so.

Gus Cannon’s music first touched me via the Rooftop Singers hit “Walk Right In” in 1962. The sound of acoustic twelve-string guitars and the beatnik message of “being yourself” was critically enlightening for a teen-ager.

Are there any memories from the Waterfront Blues Festival in Portland, Oregon which you’d like to share with us? 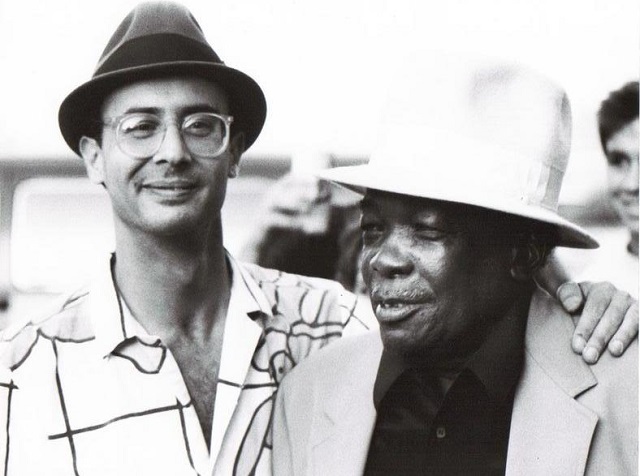 "Music provides a way to connect with the world and to digest what is happening around us." (Photo: Del Goldfarb & the late great bluesman John Lee Hooker, Waterfront Blues Festival in Portland, Oregon 1987)

I miss my friends. I am unaware of any hopes or fears for the future aside from global warming.

If you could change one thing in the 'Blues world' and it would become a reality, what would that be?

Everyone would be issued a Les Paul at birth.

Are there any similarities between the blues and the genres of Jews folk music and traditional forms?

Yes. The Jerusalem Jazz & Blues Hall of Fame explores how the blend of Jewish and African-American traditions were key to the development and dissemination of these genres of music.

We learn about life and how to roll with the punches. And no matter how bad things seem to be, you are not alone. Blues is your family.