"Ironically, I feel that the blues had a more consistent public attraction than it does now. This new ‘Pop’ world could use some more Soul and Blues in it, I feel."

Growing up in Chicago, (Andy) MacINtyre discovered classic rock and blues in his parents record collection, and at the age of 13, taught himself how to play the guitar. In 2007 MacINtyre recorded his first solo album Set Me Free, an album of classic hard rock and blues revival. Working with engineer and producer Ben Blank, a man with nine gold records under his belt, the album led MacINtyre to build a name for himself among the Texas blues communities as a “slash and burn guitarist.” In 2010, he teamed again with Blank for Revolution. This sophomore effort being a slight departure one critic described as “fluid, versatile and gutsy”.    Photo by Christopher Durst 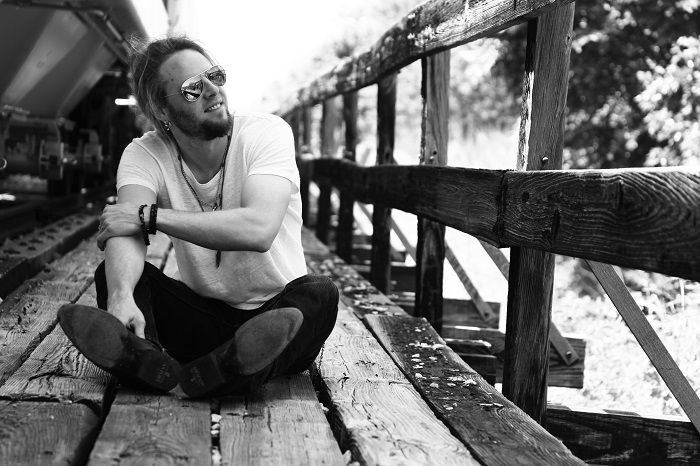 MacINtyre steps out of the pure blues rock formula to add edge and a modern bite. Furthering developing his unique sound, MacINtyre’s 2012 release Ruby, has a heavy-hand on constructed songs, melody, and vocal performances. Songs like “Ruby” and “Jailene” inject MacINtyre’s early influences with modern rock and pop as heard in his signature falsetto. Released this year, the raw experience of MacINtyre’s live performance is captured in Live at The Moontower. Recorded at Austin hotspot, the Moontower Saloon, MacINtyre mixes originals, new material and one unexpected cover song on his very first live album.

Ultimately, I learned the 5 main genre/styles of modern Music are all derived from the Western scale. What separates those genres is the way the scale is played and felt. It’s all the same thing...just organized differently. The Blues is actually incredibly angular and funky. I think that’s why all walks of life are attracted to it. It’s fun, eerie, and mischievous at the same time.

How do you describe Andy Macintyre sound and songbook? What characterize your music philosophy?

People have described MacINtyre as, “Alternative Blues/Rock” and the reason being so it won’t be nailed down to just straight ahead Blues/Rock…or just Rock. I like to add different approaches into something everybody has heard before. There’s nothing wrong with inserting yourself into a song. My philosophy is: Accept yourself. After that, change what you feel needs to change to become a better artist. Oh, and don’t be afraid of constructive criticism. "I think the music trumps all. That’s the important part. We need to go back to understanding music and educating people with it and putting it back into schools. Cultures speak through the universal language of Music. That’s beauty anyway you cut it."

What were the reasons that you started the Blues/Rock searches and experiments?

Because I’m always trying to be a better me...a better artist. I wanted to be a Rock guitar player in my teens, but somehow I knew to learn The Blues in order to understand where all the greats were coming from. They knew they wanted to say something special or different, so they searched for a way that meant something on any level they could find. In the end it doesn’t matter if its skin deep or to the ultimate depths, one has to feel it.

Oh man...there’s been some pretty fortunate moments I’ve experience. A few years ago, I was looking for some Guitar pickups to buy on line at Austin Vintage Guitar Store (Owned by Steve Fulton, Leslie, and Bill Webb. I Love that place!) Steve was showing me some website and we were listening to samples over his computer. I pointed to one set I thought sounded good. Steve looked up and said, “Hey Jimmie! What’s happening?” Jimmie looked over my shoulder, overhearing the samples, and gave an affirmative nod, “yeah man, alright.” That was mind blowing, Jimmie Vaughan liked it. Crazy. Recently, I had Dale Watson advise me, “Keep going, son. Gotta Keep on playing that Guitar! Cheers.” So we had a few rounds together. Awesome dude.

My fondest memory as of right now is one of the recording and mixing of the newest MacINtyre release, ‘Live at The Moontower’. We were really on that night and it was recorded very well. It was just released 2 weeks ago. Doug Day on drums, Christopher Alexander on Bass, and recorded and mixed by Eric Harrison. It’s a really good album, mixing went smoothly with Eric, he's just very pro about everything...excellent ears. Oh! And Van Wilks sat in with us, that was so cool! Just over SXSW (Dirty Dog Bar), I opened for Tyrone Vaughan! That was a blast, A LOT of guitar that night. hahaha..Thanks, Ben! "Because I’m always trying to be a better me...a better artist. I wanted to be a Rock guitar player in my teens, but somehow I knew to learn The Blues in order to understand where all the greats were coming from." (Andy & Gary Clark Jr. on drums, Photo by Lisa Renee Macintyre)

Ironically, I feel that the blues had a more consistent public attraction than it does now. This new ‘Pop’ world could use some more Soul and Blues in it, I feel. But then again its several positive steps forward with Gary Clark, Jr. around...and its nothing short of a miracle he’s where he is, that’s awesome! Someone once said that The Blues goes in and out of popularity, but it never leaves us. So I think that’s my answer. My hopes for the future for The Blues are what my hopes and fears are for Music in general: We can’t let the artistry that goes into it just curl up and die. Some of that is part of the industry and some of it is on us. This is a unique time for music because people were not intellectually prepared for the Mp3. It’s a really good thing that vinyl has made a comeback, it encourages the listener to be just that: A listener. I’m listening to some vinyl right now during this interview.

I may contradict myself here, but I’d like to see the CD regain the respect it once had. All in all, it’s still the most balanced approach for playback, accessibility, record industry folks, and the fans. It’s the one medium where we really got it right. But oh man, when we went wrong...it was dead wrong. I’d like to see better quality control on the loudness war because that can really ruin the sound of classic analog recordings...Yikes!

What are the lines that connect the legacy of Blues with Rolling Stones and continue to SRV and Nirvana?

Honesty. The same thing is always found in The Blues. Nirvana covered Huddie Ledbetter’s “In the Pines/Where’d you sleep last night?”...who would've called that one?? Talk about a risk! And guess what, it paid off. He should still be here; that is a loss that’s still being felt. 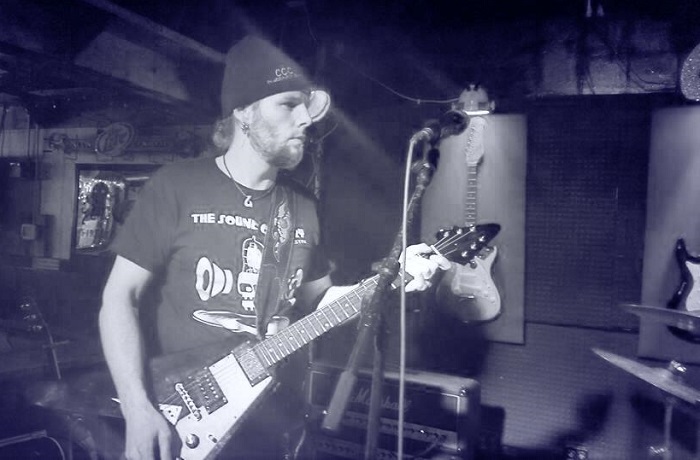 "My philosophy is: Accept yourself. After that, change what you feel needs to change to become a better artist. Oh, and don’t be afraid of constructive criticism."  (Photo by David Touchton)

What is the Impact of Blues culture and culture to the racial and socio-cultural implications?

I think the music trumps all. That’s the important part. We need to go back to understanding music and educating people with it and putting it back into schools. Cultures speak through the universal language of Music. That’s beauty anyway you cut it.

What has made you laugh lately and what touched (emotionally) you from the local Texas blues circuits?

As conflicted a time it is for this state, it hasn’t completely lost its sense of community. It is still there...you have to search for it a bit more now. Appa Perry, whose played with damn near everyone (including Texas’ own Alan Haynes!) recently suffered a stroke that landed him in the hospital. The bills were mounting up, it was a scary time for him. Somebody came up with the brilliant idea of throwing together an Austin musician-powered benefit called, “The Appa-ning 4 Appa”. We all came together. Played for Appa, made music with him, donated time, money, music, and effort to getting him back on his feet. It was a great day for Appa. Pretty much everybody checked the ego at the door and participated for the right reasons. Just about everybody. Haha.

Hmm...that’s a tough one...seeing how a trip into the future is a one way trip, I’d go into the past then. There’s way too many things to really pick from, so I’ll give a typical answer: 1972. Rolling Stones. Exile on Main St. tour. I’d see them on the Sunday show they played Texas. Midnight Rambler!! Yeah, that’d be something to experience! That way when I go back into the future, I’d be able to go home. Hey Thanks having for this interview! This was cool, I enjoyed it. 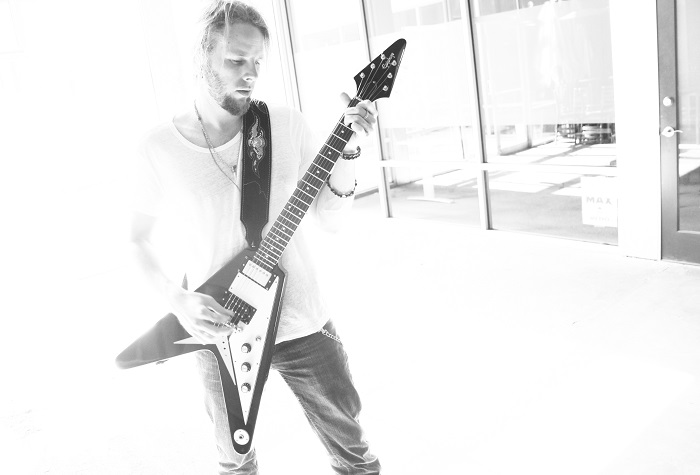