"Destroy all egos and attain emptiness."

Tate Swindell: The Sūtra of The Beats

Archivist, Poet and Photographer, Tate Swindell is the founder of Unrequited Records, which specializes in poetry records released on the vinyl format. The latest release was an album of rare Gregory Corso readings from the late 1970s that included previously unpublished poems. In addition to an album of rare Bob Kaufman recordings due out in 2020, he recently co-edited the Collected Poems of Bob Kaufman for City Lights Books (2019). Tate, and his brother Todd, worked extensively on the Harold Norse archives, which were donated to the Bancroft Library at UC Berkeley. He is currently writing a memoir about his experiences as a pioneer in the San Francisco medical cannabis movement. His previous collections of writings include Palpitations, The Creation of Deadlines and Fotopomes. 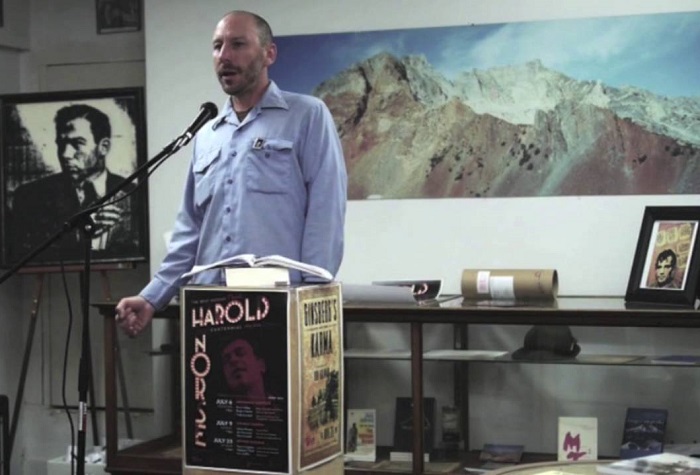 An album of rare and previously unpublished material by Gregory Corso released in the Summer of 2019. "Gregory Corso: The Gold Standard" was compiled from the recently discovered Scrivani Tapes. George Scrivani, Corso’s longtime friend, traveled with Gregory in the late 1970s throughout Europe. Having cut his bootlegging chops at various Operas in Europe, Scrivani recorded Corso at various readings, interviews and events. This included an impromptu lecture Corso gave at the JFK Institute, in Berlin, on the genealogy of the Beat Generation. Upon returning stateside, Scrivani continued to record Corso in San Francisco, in the 1980s, at locations such as S.F. Art Institute, New College (r.i.p.) and the legendary Keystone Korner in the North Beach neighborhood. The Keystone Korner tapes include a phenomenal reading with Allen Ginsberg in 1980. The two had not read together in San Francisco since 1956. Another Keystone Korner tape features Jaki Byard on piano, the legendary multi-instrumentalist/composer/arranger,  joins Corso for two extended poems. Each side contains 27 minutes of unprecedented Corso material.

How has the Beat Movement and music influenced your views of the world and the journeys you’ve taken?

They are my spiritual gurus. Hence why I throw money at them.

What were the reasons that you started the Unrequited Records? How do you describe label's philosophy and mission?

Vinyl records can be played by spinning a sewing needle on the wax to produce sound—this is far superior to any digital technology.

Destroy all egos and attain emptiness. Going to a job that was more like school with professor Ronnie Burk. Living across the street from Harold Norse.

The best advice I heard was when Diane di Prima passed around the books she had published—both her own and others—and stressed to not worry about perfection and just do it yourself.

"The Beats begat the Pranksters begat the Hippies begat Punk & Hip-Hop begat me."

What touched (emotionally) you from Gregory Corso? Why is this album matter important today? How do you want it to affect people?

His dedication to the craft is inspiring. I want people to pray to it every Sunday.

What's the legacy of Gregory Corso? If he was speaking seriously to us, what do you think he would tell us?

Gregory is visionary and his voice will always be relevant. He would shake you down for whatever ya got.

What was been the relationship between music and poetry; and how does music affected Huncke, Micheline and Norse inspiration?

Music and poetry have been paired for centuries. Micheline always read with sax or bass and the rhythms are abundant in his work.

What do you learn about yourself from the Beats? If you could change one thing from "the Beat era", what would that be? 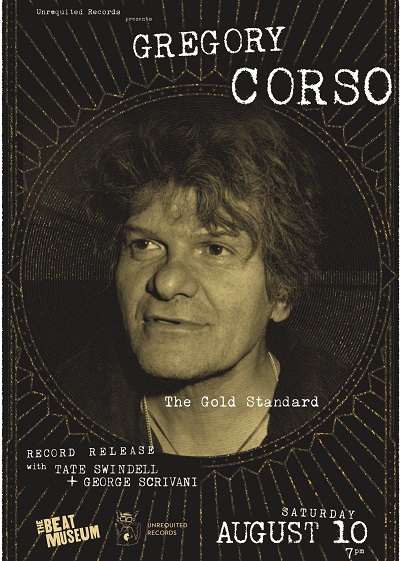 “The Beat Generation is the dying light.” Bob Kaufman.

"Music and poetry have been paired for centuries. Micheline always read with sax or bass and the rhythms are abundant in his work."

What is the impact of Beat Movement to the racial, political, spiritual, and socio-cultural implications?

The Beats begat the Pranksters begat the Hippies begat Punk & Hip-Hop begat me.

An album of rare and previously unpublished material by Gregory Corso released in the Summer of 2019. "Gregory Corso: The Gold Standard" was compiled from the recently discovered Scrivani Tapes.