"The Blues to me is the “Peoples Music” with all the emotional colors we all go through in our lives. Lyric’s about the human condition that was born and stylized out of the slave trade many years ago."

Kevin Borich is a musical performer without borders and every performance render the audience prisoners without escape. The Borich machine features the who's who of bassists and drummers across Australia and all lineups leave the same impression on fans, they leave knowing they have just witnessed world class performance. Kevin Borich is a man with 40 years of professional experience behind him; a man who opened for AC/DC, a man who was casually invited onstage to jam with Santana more than once; a man has shared the stage with Bo Didley, Richie Blackmore, Ron Wood, John Mayall, Taj Mahal, Living Colour, Joe Walsh and has opened for Tony Joe White, Ray Charles, Elton John, Status Quo, Jeff Beck and Buddy Guy and a man who topped the Australian Rock Music Awards twice as Best Guitarist. 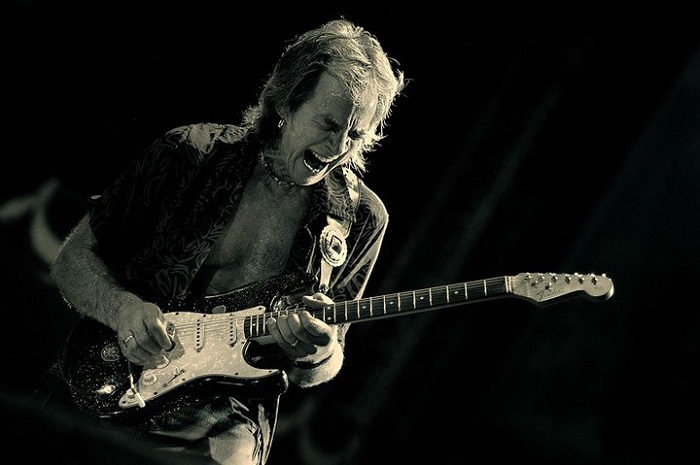 Crowds that turn up for Kevin Borich performances are a mixture of generations and attitudes. There are the younger musicians that are left pondering just how 3 performers can create such inescapable sound of electrifying rock; there are the old rockers: men past their prime but somehow with their long hair and relaxed stance they seemed to be the epitome of cool. There are young blues fans: guys and girls who know every word to every song and run around dancing manically and enjoying themselves immensely and there are the people from the indie regime who are curious to see if it is true what they have heard, that a guitarist song writer with a career spanning 40 years can transcend his rock based funk 'n' blues boundaries into the realms of their world.                   (Photos by Kevin Borich's Archive / All Rights Reserved)

The Blues to me is the “Peoples Music” with all the emotional colors we all go through in our lives. Lyric’s about the human condition that was born and stylized out of the slave trade many years ago. It can be about – Love – Sex – Violence – Depression - Oppression - Corruption and of course the good fun times we have as well.

It’s a voice - like on my new CD TOTEM I wrote a song called “The SoapBoxBitchinBlues” - It’s about the injustice of the world’s banking and money systems, something the you in Greece are having to contend with right now and I wrote it after watching the Financial Crisis unfold on my TV as I witnessed the Banks creating  misery for us due to  greed via their over extended derivative markets for making easy but risk laden profits. So I’m voicing my disapproval in anger at how this can be allowed to happen – fueled by Greed.

How do you describe Kevin Borich sound and songbook? What characterize your music philosophy?

I have learned what I like in the type of musical influences that turn me on. So in a nut shell it’s mainly “FunkinBluesRock” -those words in that word contain the major types of feels that I love. There’s others too of course like Latin & Reggae and a little Jazz which I have also written songs in. 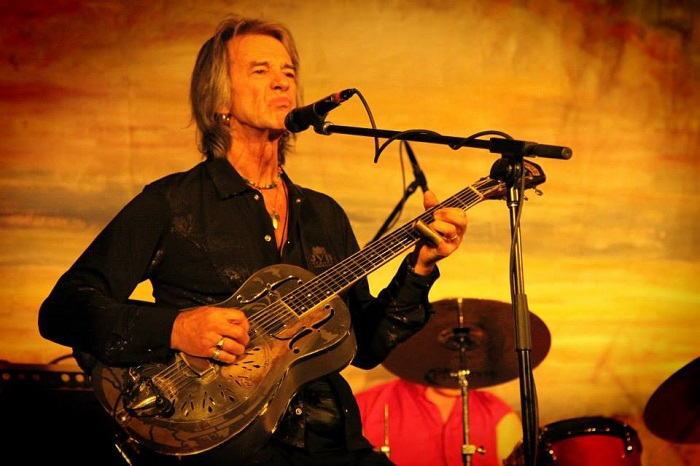 "What I miss and the fears of the future – there are less Live Venues to play then before which is a worry for young musicians, hence the term 'Garage Bands' was born."

I saw the Black & White Movie “Rock Around The Clock” in my early Teens and was ignited by the energy of people like Little Richard, Fats Domino, Chuck Berry, Bill Hailey & The Comets. I just had to have a piece of that and get that feeling. I saw “jailhouse rock” and had my great Elvis experience.

Later I’d listen to the BBC Radio broadcasts that we’d get in NEW ZEALAND where I was born and heard the Small Faces, Jimi Hendrix, Eric Clapton, John Mayall, Manfred Mann etc. so they brought the blues to us as well as my very Hip Auntie Joni who gave me some Blues records with Howlin Wolf, John Lee Hooker & Muddy Waters and also the incredible Ray Charles – they all blew my mind and fueled the fire.

I’ve had many great experiences from jamming with Carlos Santana in front of 60.000 people. Played with the Wonderful Joe Walsh who Joined my band for a one off show and hung-out with me at home . Richie Blackmore came to a show and graced us by jamming. Three members of “Livin Color” jammed with us at “The Manzil Room” club in Kings Cross Sydney. Had a jam with Ronnie Wood at his NY House where he played the drums - got up with Bo Diddly on one of his shows. These are some of the “Right Time-Right Place Experiences” I’ve been lucky and most grateful to have had. But just coming off stage after a hot set with the crowd asking for more is good enough for me to reclaim sanity. Best advice is to open your heart to the audience - give yourself & be happy that you have what you have to give. 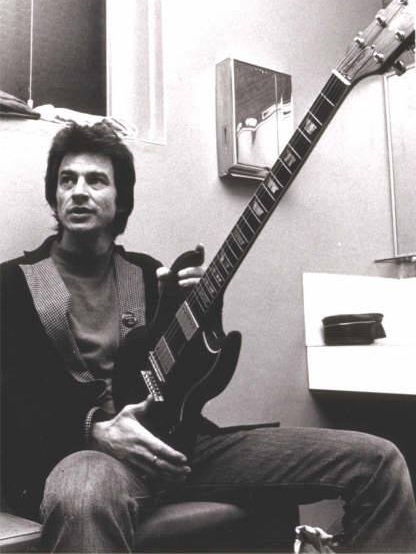 What I miss and the fears of the future – there are less Live Venues to play then before which is a worry for young musicians, hence the term “Garage Bands” was born. The red tape restrictions on opening and running a venue are so many that makes it difficult for people to maintain and run. Commercial Radio is unfortunately Big Corporate Run now - but we are blessed with Community Radio who give people like me air play which is great! Good things are the internet and the fact that you can record at home or at a reasonable studio due to the great affordable Recording equipment available these days.

Are there any memories from Santana, Bo Diddley, Taj Mahal, and Ray Charles which you’d like to share with us?

Well I’ve sort of covered that before – but must add there are many great Australian Artists that I’ve had the pleasure to play with as well.

Make an account of the case of Blues Rock in Australia/New Zealand. Which is the most interesting period?

The most interesting period for me was the late 50’s, the 60’s and 70’s because there was so much new ground being broken musically – I actually saw and heard the Birth of Rock n Roll - As Sonny Terry and Brownie McGee put it “The Blues Had A Baby and they Called It Rock n Roll”. So what a Baby it’s turning out to be eg Fusions in Rock n' Jazz – Hip Hop and the blending influences of world music. Of course there are good things still happening but that early period shift is it for me.

What are the lines that connect the legacy of Blues Rock from United States and UK to Australia?

The lines that connect you ask – that’s interesting because where we are situated Geographically here “Down under” – The two main Lines of music were from the UK & the USA influences, that’s where we got most of ours from & really the UK made the Blues Shine to the world via pioneers Alexis Korner, Graham Bond, John Mayall, The Rolling Stones, Georgie Fame, Eric Clapton, Jimi Hendrix who opened up the Universe for us and Jeff Beck still the consummate innovator. 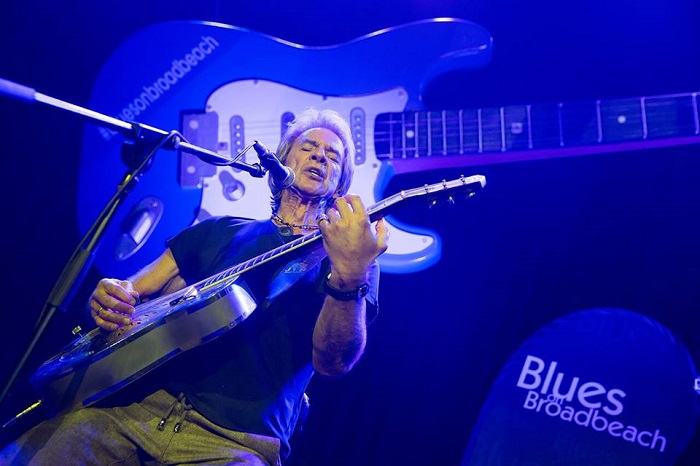 "There is new music coming out confronting the way the Planet is being run – asking the questions why e.g. – the burning of Fossil Fuels when there are other sustainable methods that should have been fully developed and in place by now. The Fossil fuel empires have slowed this process down."

What has made you laugh lately and what touched (emotionally) you recording your new album?

That laughing Medicine is wonderful stuff in this world where one can become very cynical – due to all the turmoil on this fantastic planet caused by a lot of stupidity. I had a self-ie laugh when promoting TOTEM when answering a DJ’s question which was how come there are two tracks on disc 2 of TOTEM that are 14 & 11 minutes long – I said “So you can go and have lunch” Well thought it was funny?

What is the Impact of Blues Rock culture and music on the racial and socio-cultural implications?

There is new music coming out confronting the way the Planet is being run – asking the questions why e.g. – the burning of Fossil Fuels when there are other sustainable methods that should have been fully developed and in place by now. The Fossil fuel empires have slowed this process down.

On TOTEM I have a song I wrote called “There Goes Another Freedom” about the devastation of CSG  mining’s Fraking, engineered by the Bully Muscles of the Huge Cooperate Companies who can push Farmers off their own land by having Governments in their pockets. Big Money is an uncaring Ugly Powerful Beast only focused on feeding their hungry shareholders. 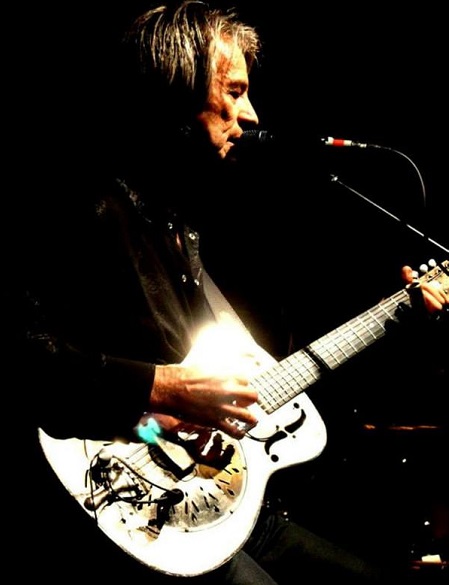 Ahh the time machine, What a great Concept, very seductive – Mines in for a service at the moment - funny - due to my Radiation and Chemo Cancer fight, and dare I say Victory – I’m very much in “The Now” these days and I’m grateful that I still is. I’d settle for a trip to play in Europe. Your country Greece and just Up the road a bit to the Dalmatian Coast where my Family Roots are I haven’t seen, and the History in Europe would be good to see. I’ve only briefly seen Paris and Munich where I did a few shows many years ago.

To Me The closest thing people have are those “Play Stations” and Virtual Reality Gismo’s  but they lack the Realities of the Time Machine - What model do you have Michael?