Q&A with Australia's lady of rock, Lisa Perry (Hellz) - true singing and songwriting force, her music is connected to our souls.

"Music seems to bring people together by creating a neutral ground where people can relate upon the same experiences. I think it is grounding."

Australia's lady of rock, Lisa Perry is a true singing and songwriting force. Lisa embodies a giant 6 full octave range, paired with the power of a freight train. Undoubtedly, Hellz has the voice to make any rock and heavy rock vocal memorable. Hellz passion working within the music industry is second to none. Lisa Perry works tirelessly, every day to keep her dream alive and her many baskets full. Lisa is honored to have one of the most legendary vocal microphone companies as an endorsement. RØDE Microphones is helping Lisa create her very own custom studio and stage Mic.  Lisa's positive outlook and explosive stage charisma is loved by many fans globally. Lisa Perry is a complete package she designs and makes the costumes, creates the photography and music videos, creates digital promotions, campaign's, Makeup artistry, songwrites, produces, manages all social media and websites. Lisa has an amazing energy. 2019-20 brought endless opportunities and collaborations with well known artists such as Jeff Young / Megadeth, Jeff Totoura / Blue Man Group and Steve Fieldman lead singer of Iron Butterfly. Most recently also working with Baron Rojos Gorka Alegre and Metalium guitarist Tolo Grimalt. Lisa is proudly endorsed by Olympus Custom Guitars. The Australian brand has created one of a kind guitars for artists such as Richie Sambora and Orianthi. Other endorsements by Australian coffee company High Voltage Coffee. 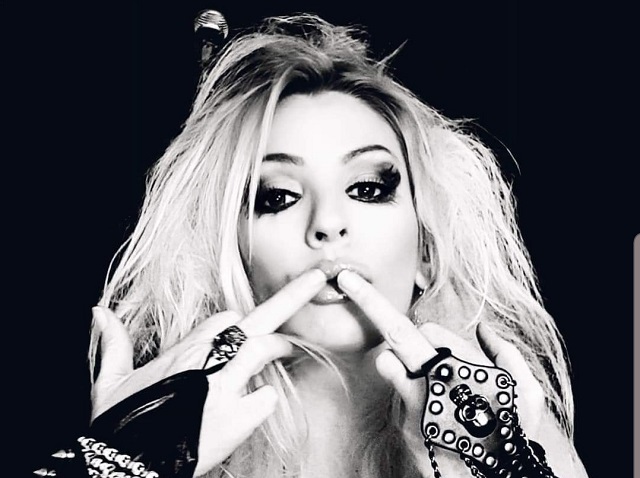 Performing is in the blood of Hellz. As a young child Hellz was spotted and mentored by her dance teacher Ross Hutchison, a successful dancer/ choreographer known for his dance performances alongside Liza Minelli and Sammy Davis Jr and choreography for the great Benny Hill. Her father is a former session musician on the 60s and 70s British music scene. Together they performed as Wooky Hollow for over 10 years performing alongside well-known Australian artists such as Johnny Diesel and Mark Seymour from Hunters and collectors. 2020 was to be a huge year for Hellz as she considered offers to perform both internationally in the USA and nationally in Australia. Lisa was booked to play at a festival with artists in New York including Joel Hoekstra / Whitesnake, Christopher Caffery / Trans Siberian Orchestra, Bobby Rondinelli (Black Sabbath), Greg Smith (Ted Nugent Band), Anthony Krizan (Spin Doctors). Lisa Perry has unleashed every piece of her talent to bring the world her new single We want rock! The new music video released on the 10th of October 2020, will make audiences think they are seeing quadruple! Hellz herself has stepped up and taken on the mammoth task of solely writing and producing the catchy rock single. Hellz is now focusing on writing and recording and planning International touring with Global Unity Tours in 2021.

I love the family of rock! It is such a positive and meaningful existence to live and breathe music and to enjoy bringing that to the rest of the world. I believe in freedom and music represents the ultimate of freedom. There are no rules with music. If you want to bang on a cardboard box and sing along to that you can, and its music. A baby can clap her hands and babble a song… that’s music. People that speak every different language all understand the same melody of a piece music. There is no book, religion or stereotype needed to belong to music. Everyone is welcome. How amazing is that? In this world where we all seem to be labelled in some way or another music offers a unique freedom to express ourselves.

I love to say that my sound is influenced by Rock and Hard rock. I love a hard-hitting sound. Kind of like music that you can stomp around to. Energy is a key aspect of my songs I write. It is important to get people to tune in with the emotions that you are trying to express when writing music in order for them to connect with the song. Whether it is with the lyrics or the overall feel and energy of the song. I write about feelings and circumstances that a lot of us go through in life. Sometimes I write about personal experiences and others I am inspired by the experiences of others. Music has the power to heal our deepest sadness and celebrate our happiest moments. 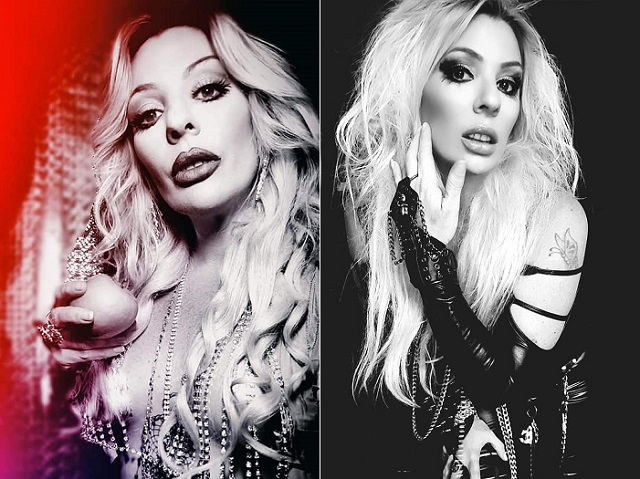 "I miss the culture of the fans, I miss the togetherness and the way music brought unity to the masses. Rock is real and raw it wasn’t a sound made out of a computer it was a sound that came from the heart. I miss the realness." (Photos: Lisa Perry - Hellz)

In the last 20 years I have played hundreds of gigs with audiences anywhere from 2 to 20,000! I have had everything from beer glasses to underpants and thrown at me. I have performed for the best biker club house parties and watched a police parties turn into one of the most violent brawls I have seen, have had my drink spiked and stood at many, gas stations at 2am eating a hot meat pie on my way home from a show! I have been a session singer and worked with some of Australia’s top producers and shared the stage with a few great Aussie acts and past members of Megadeth. A lot of people don’t realise that I have been working within the industry for so long and question my experience and mistake me for being new to this! I have well paid my dues!

I miss the culture of the fans, I miss the togetherness and the way music brought unity to the masses. Rock is real and raw it wasn’t a sound made out of a computer it was a sound that came from the heart. I miss the realness. The coolness of not needing a butt implant to be on the billboard charts. I think the key word here is ‘REAL’ and I miss that. A singer that sings the same live as they do on the recorded album. I miss the control an artist has over the sale and value of their music. Music isn’t cheap to make and its value needs to represent that cost.

The most frustrating thing is being judged as a weak, naïve little lamb when really, I’m ready to rip someone a new hole for treating me like that. Then, when I give them back a mouthful of the truth they don’t like me anymore hahahaha. You never can be everyone’s cup of tea. Being a female artist and entrepreneur in this industry I experience a mixed bag of great people, control freaks, and sadly sometimes a complete asshole slips through the cracks and I have to deal with them haha. Other than that, I think women in rock is a genre that still needs more appreciation. We have a few great nameable metal female vocal vixens out there now, but the rock vocal is very different to a metal scream or growl. Its about power, melody and emotion. 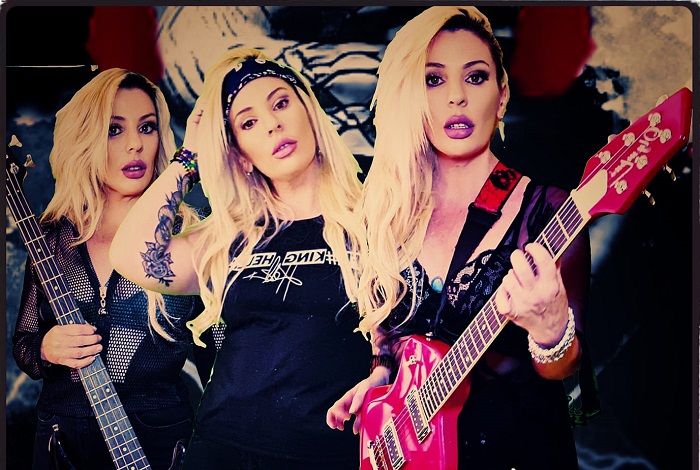 "I believe in freedom and music represents the ultimate of freedom. There are no rules with music. If you want to bang on a cardboard box and sing along to that you can, and its music. A baby can clap her hands and babble a song… that’s music." (Photo: Lisa Perry - Hellz)

What would you say characterizes "Olympus" in comparison to other guitars? What touched (emotionally) you?

Olympus Custom guitars offer a completely handcrafted build. The guitars are built with local wood found at the foothills of MT. Olympus in Greece. Not only is this the home to the ancient Greek gods it is also part of my family’s Greek heritage. Everything about an Olympus guitar oozes quality. Even the Nick Silver Warrior pickups are handmade in Greece and these pickups are serious quality. Johnny Prapas is a master guitar luthier. Upon visiting the Australian workshop, he talked about his build process. Johnny has impeccable guitar building knowledge and the Olympus, JL Hellz signature model he created me is better than any other brand of guitar I have played. I am not a professional guitarist, but I know what quality is.

Music seems to bring people together by creating a neutral ground where people can relate upon the same experiences. I think it is grounding. I feel, 2020, the year that the music almost died, to be a year where people had the music and festival culture removed from their lives. This resulted in barriers being built between people. Then further resulting in the loss of people being able to relate and emotionally communicate with each other. We have been forced apart and taught to stand apart from each other. We now need music more than ever to bring us all closer together again. Music is essential.

Defiantly Queen live at Wembley in 1986, front row center and then off to hang out with the coolest man in history Freddie Mercury after! I think we would have been great friends. Seriously I love that guy! 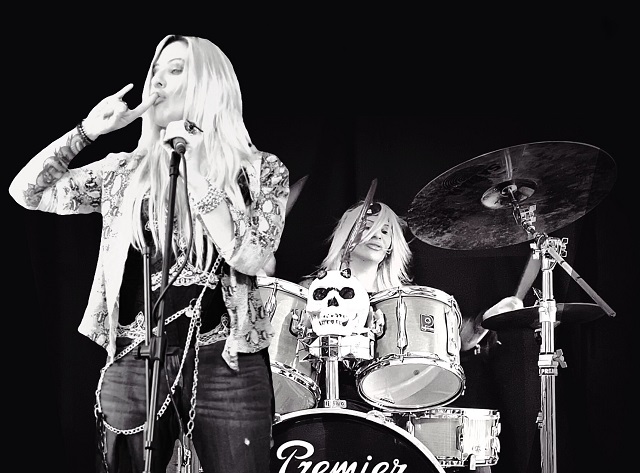