"Firstly, I hope it makes them feel good, take them away from any troubles they have and immerse themselves in the music, perhaps driving in the car with the music cranked up. Secondly, I hope to inspire people to pick up a guitar, pick up an instrument, as it can be a great creative outlet, and a way to build impressively strong discipline – if you want to take it that far. And it’s fun!"

The blues is music that traveled on trains and steamboats from the Mississippi Delta to the neon streets of Memphis, Chicago and St. Louis. For Matty T Wall – a guitarist, vocalist, songwriter and bandleader – it is the supernatural sound that crossed the ocean to Perth, Australia to ignite his imagination and give power to his art. A young man with an old soul: Matty is connected to music with a wealth of history as he distills a diversity of genres into his own blues-influenced soul, jazz and rock signature. His points of references are wide; he has studied and played a spectrum of styles including flamenco, swing jazz and funk, and he attests to a love for “heavier things” in his youth, bands like Metallica and Sepultura among them. But he remembers how the musicians he admired would honor the blues masters who came before them. And following the trail of Eric Clapton and SRV backwards. As a guitarist, Matty wrings raw emotions from single notes, stretching and bending the strings of a Les Paul into sounds both persuasive and human. While he is capable of blazingly fast leads, he also drives the beat with percussive punctuation and solid assurance. With his vocals, he coils along the lines of the guitar. He says that his songs are primarily riff-driven, and he compiles his musical notations into a catalog of 50-100 concepts that he can call up when lyrical inspiration strikes. 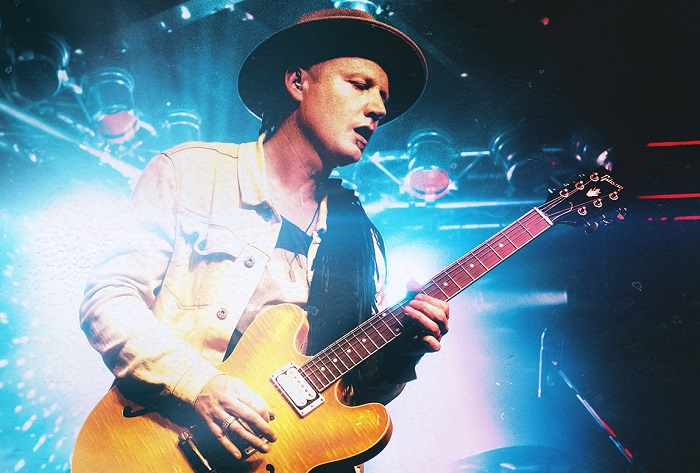 His new live album titled 'Live Down Underground' (2022), from sweet blues to gritty, stomping, blues-rocking beats, and now having seven nominations in the Independent Blues Awards, a Western Australian Music Award win and three back-to-back Number One Australian Blues albums, this is a breakout Australian blues artist you do not want to miss out on seeing. The Matty T Wall band returns to the stage more motivated and addictively electric than ever with two killer rhythm legends of the scene, Ric Whittle on drums and Leigh Miller on bass guitar. While the music that Matty plays has roots in the past, he is a very much an artist in the present. Through his reverence for historic musical forms, he is not emulating, but redefining these sounds, as he introduces classic genres to new listeners and invests them with his own trademark.

In the past I was trying to go in so many different directions all at once. I suppose to see what would stick. In my recent years, I have been turning more to a boogie-blues based rock thing, with plenty of attitude and swagger. Similar to what ZZ Top did with john Lee Hooker’s influence, although my influences also add heavy metal music. I still enjoy playing and writing slow blues songs though, and they will remain a staple for me.

My blues influences have remained strong, and my music making process is the same – write bucket loads of riffs – then when I am ready, incorporate them into a song and work on lyrics to fit.

What do you hope people continue to take away from your songs/music?

Firstly, I hope it makes them feel good, take them away from any troubles they have and immerse themselves in the music, perhaps driving in the car with the music cranked up. Secondly, I hope to inspire people to pick up a guitar, pick up an instrument, as it can be a great creative outlet, and a way to build impressively strong discipline – if you want to take it that far. And it’s fun! 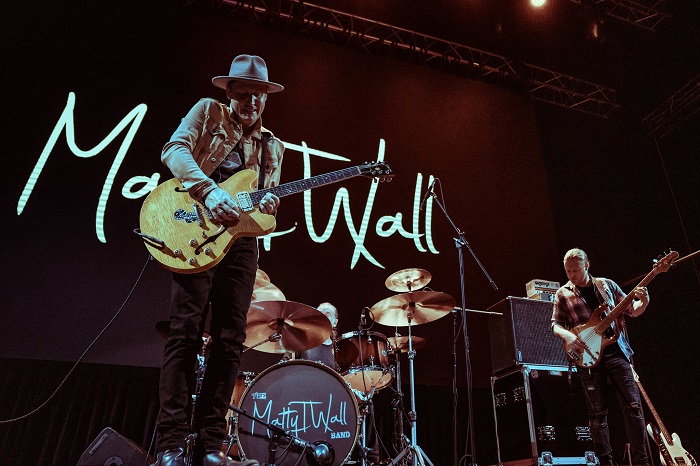 "My blues influences have remained strong, and my music making process is the same – write bucket loads of riffs – then when I am ready, incorporate them into a song and work on lyrics to fit." (Matty T Wall with Ric Whittle & Leigh Miller, Lyric's Underground, Perth 2021 / Photo © by Caris Morcombe)

I like pioneers, who have started something new, like John Lee Hooker, John Coltrane, James Hetfield, just to name a few from the blues/jazz/metal genres.  It is refreshing to me to hear music that has no boundaries, music that creates new sounds, but also stands the test of time.

Do you have any interesting stories about the making of live recording of album "Live Down Underground"?

Well, this was my first show since I injured my back in 2021. I blew out two of my spinal discs, and couldn’t walk initially! It took weeks and weeks of therapy and hard work to get things in the right direction, and within 5 months, I was 95% healed. This show I performed wearing a back brace for the whole performance.  It was a little restricting, but necessary. The audience was so appreciative to see me back on stage again and roaring to life.

Artists and labels will have to adapt to the new changes. What are your predictions for the music industry?

I can’t foresee too many changes from where we are at the moment, but I can foresee that when internet speeds reach new heights, CDs will become obsolete and you will be able to stream CD quality WAV files from Spotify etc. It will be a shame when that does finally happen, as I grew up listening to CDs and I still listen and collect them. But who knows, maybe there will be a new higher quality format - like Blu-Ray - to listen to. I know listening to mixes in the studio at 192khz is MUCH better than listening to CDs, so maybe that will be a new direction. It will also separate the average mastering from the great mastering. I also see that albums will have to be launched with full-length videos to be viable, increasing production costs, but also allowing some creativity with lower budgets. The way that video engages the listener is too powerful too ignore.

How do you think the music industry will adapt to it?

I am a bit cynical here, I believe that the big labels will find a way to monopolize any new tech – they are good at that. The rest of us just have to stick to tried and tested songwriting and performing. 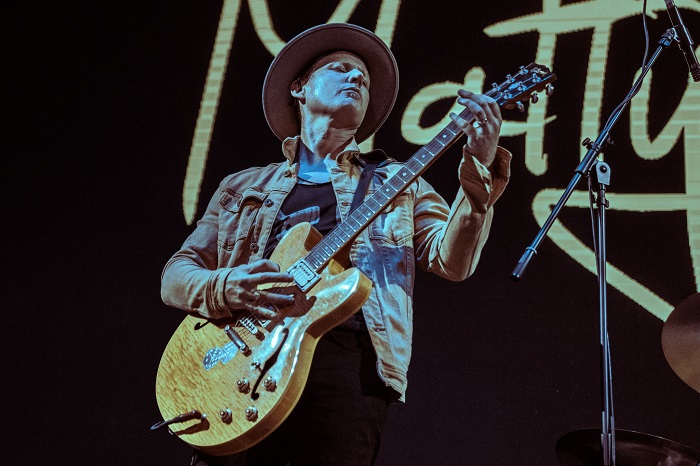