"New Orleans music has the deepest roots of all American music. The grooves there are derived from generations passed, sometimes refined, sometimes raw, always grooving. It’s the origin of so much modern music, from rock-n-roll to blues to jazz, and often all mashed together in the same song. There is a looseness, freedom, uninhibited vibe to the whole city, and it shows in the music."

Jimmy Carpenter: The Music of Saints

Two-time Blues Music Award-winning sax player Jimmy Carpenter (2021/2022), who’s also been nominated recently for a Blues Blast Magazine award for best horn player, has something special in-store for his fans with the release of his new CD, The Louisiana Record, due September 16 from Gulf Coast Records. A special collection of Jimmy's favorite songs from New Orleans and Louisiana. Recorded on the bayou at Dockside Studios with Jimmy's old friends and outstanding New Orleans musicians! Joining Jimmy Carpenter (sax and vocals) for the red beans and rice run of 11 songs on The Louisiana Record are: Mike Zito – guitars; Casandra Faulconer - bass guitar; John Gros - piano/organ; and Wayne Maureau – drums. Now based in Las Vegas, Jimmy Carpenter lived and performed in New Orleans from early 2004 until 2016, and his time there clearly influenced his music. Jimmy Carpenter, saxophonist, singer-songwriter, and arranger, began his musical journey over 35 years ago. In the '80s, he toured the east coast with the renegade blues band, The Alka-Phonics, in the ’90s with the blues-rock band The Believers, with whom he learned about the music business. Over the years, Jimmy has toured internationally with Tinsley Ellis, Jimmy Thackery, Walter Wolfman Washington, Eric Lindell, and others.                   (Jimmy Carpenter / Photo © by Paul Citone) 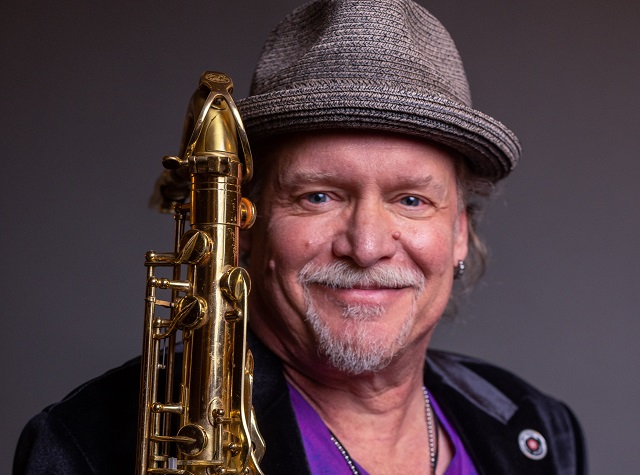 In 2012 Jimmy joined Mike Zito, his long-time friend and musical cohort, and recorded and toured as a member of Mike Zito and the Wheel. In addition to touring nationally & internationally, Jimmy has written, arranged and recorded the horns for many artists, and has gained a reputation as a master Blues, Rock-n-Roll and R&B saxophonist. Jimmy has also released three solo albums: Toiling in Obscurity, (2008); Walk Away (Vizztone 2014), and Jimmy Carpenter Plays the Blues (Vizztone 2017). After many years in New Orleans, he currently lives in Las Vegas with his partner in crime and musical inspiration, Ms. Carrie Stowers. In addition to leading his own band and playing with numerous others, he is the Musical Director for the Big Blues Bender, and leader of the Bender Brass, The Bender’s house band. He is the current president of the Las Vegas Blues Society, and in 2020 was nominated for a Blues Music Award, his 5th for Best Instrumentalist/Horn.

I hit the road with a renegade blues band as soon as I was sure I could make $100 a week. That was many years ago, I was young and wild and having a ball. As the years passed I realized I had to be serious about the music and my life if I wanted to sustain a career. I learned to be the consummate sideman, supporting the music and the other musicians, adding my own bit to the songs and the performances. Soon after I arrived in New Orleans I decided I wanted to record and perform as a band leader, and I began making records myself in 2007. Being the leader is much more challenging, with the organizing, promoting, writing, arranging..it is a challenge but a very rewarding one. The Louisiana Record is my 5th solo album and my 2nd on Gulf Coast Records. After over 40 years, the constant in my process is my love of touring, and performing night after night with the band, building the songs each night and making new magic during each show. There really is nothing to compare to the feeling of making music with great musicians.

Currently you’ve one more release with Gulf Coast Records. How did that relationship come about?

Mike Zito, co-owner of Gulf Coast, is my long-time dear friend, I go back about 20 years with Mike, and was a member of his band, Mike Zito and The Wheel. I loved touring the world and recording with Mike, and he has always been enormously supportive of my solo career. When he started GCR he asked me to join the label, and of course I did not hesitate. His partner, Guy Hale, has also become a dear friend, and contributed lyrics to 2 songs on Soul Doctor. The Gulf Coast family is exactly that, and we all support each other.                             (Jimmy Carpenter & Mike Zito, 2016 / Photo © by Michael Kurgansky) 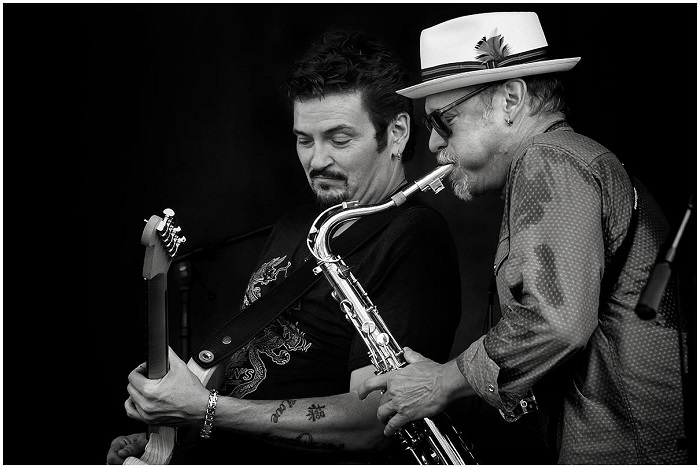 "My entire goal is to create moments of emotion, to make people feel something beyond just hearing the band. That’s my goal in songwriting, soloing, arranging…some people aren’t moved by music, which I find utterly mystifying, and I don’t think there’s much help for them."

Do you have any interesting stories about the making of the new album The Louisiana Record?

When Mike proposed the idea, I was hesitant at first. With such a huge premium placed on original material, I wasn’t sure a cover album would work. BUT when he said we would go to Dockside Studios and record with my old friends from New Orleans, I was sold. It was an intense 3 days, with the rhythm tracks, along with me, recorded live in just a day. None of us were sure we could make that happen, but we did, and I think we really created something beautiful. Being in that environment, literally on the bayou of SW Louisiana, with the frogs and crickets and Spanish Moss on the oak trees, it was very easy to get in the mood. And working with recording engineer David Farrell is a real treat! He is so good at his job, and very patient, reassuring and supportive. It was a great experience.

Why do you think that the NOLA music continues to generate such a devoted following?

New Orleans music has the deepest roots of all American music. The grooves there are derived from generations passed, sometimes refined, sometimes raw, always grooving. It’s the origin of so much modern music, from rock-n-roll to blues to jazz, and often all mashed together in the same song. There is a looseness, freedom, uninhibited vibe to the whole city, and it shows in the music. I can spot a New Orleans drummer within a few beats...they say there must be something in the water! It is a very deep, organic place, and there’s nowhere like it!

Insecurity and self-doubt are challenges for nearly all of us, and I am no exception. Fear of failure, and conversely, fear of success have been issues for me all my life. Dealing with it is a daily challenge, and it effects all aspects of life. When I am successful in getting beyond it, I am able to write, perform, book shows, promote… everything works. But when I’m not I can get stuck in a cycle of worry and stress. Although we don’t talk about it much, I’m fairly certain that all artists deal with this. To do what we do we must put our most personal and vulnerable selves out there for the world to see, hear, and judge. It’s not easy, and can be terrifying. But it is also enormously satisfying. 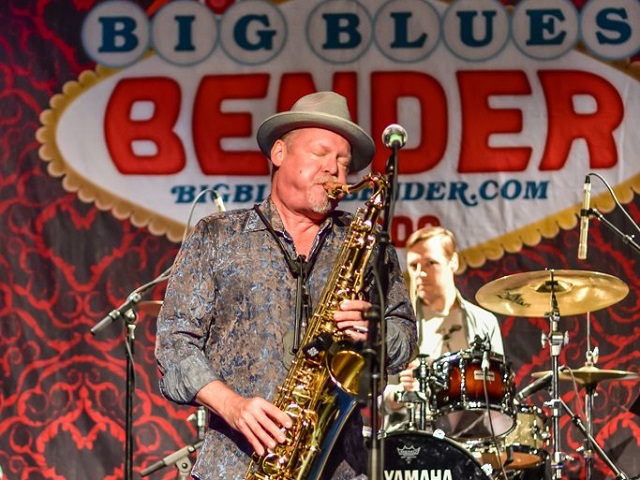 "Some are practical, like get all agreements in writing! It’s important to learn as much as you can about your craft, to listen to lots of music and take in the myriad influences around you. Some lessons are more about getting along and respecting others." (Jimmy Carpenter, 2019 / Photo © by Loren Ryder)

What music moment changed your life the most? What´s been the highlights as Musical Director for the Big Blues Bender?

There have been many! When I first heard Paul Desmond, King Curtis, Otis Redding, and many others, the music caused a visceral reaction, I have been moved to tears many times. I saw Mott The Hoople on my 15th birthday, and have never been the same... Most recently, my role with the Big Blues Bender has very significantly changed my life, giving me the opportunity to do so much on a larger scale than ever before. As my role has grown, I’ve been able to grow with it, from just playing sax to writing and arranging for an 8-piece band of killer musicians, and backing up countless amazing artists. It really is a blank canvas that the Bender trusts me to paint. It’s a huge responsibility, but also a fantastic chance to broaden my horizons. AJ Gross, Founder of the Bender, has placed enormous trust in me to make every Bender special, and I hope to rise to that challenge every single year!

How do you want the music to affect people? What do you think is key to a music life well lived?

My entire goal is to create moments of emotion, to make people feel something beyond just hearing the band. That’s my goal in songwriting, soloing, arranging…some people aren’t moved by music, which I find utterly mystifying, and I don’t think there’s much help for them. But I think most people feel music, sometimes on a cellular level, and that’s where I want to meet them, whether it’s a lyric, or a solo, a horn section part, whatever…I want them to feel it and be moved. I think if I can do that, and pursue that in my music, I have lived up to my gift.

Some are practical, like get all agreements in writing! It’s important to learn as much as you can about your craft, to listen to lots of music and take in the myriad influences around you. Some lessons are more about getting along and respecting others. One of my heroes is the late Sam Butera, who always closed his shows with, “remember, it’s nice to be important, but it’s important to be nice.” I try to live by that, and it most often works. Another practical one, and maybe the most important, is to take care of your body. This is a physically demanding job, from the travel, lack of sleep, long hours on the road, and the shows themselves. If you want to do this for a lifetime, you have to stay as healthy and strong as possible. I have a lot more to do, and I want to do this for a long time to come. 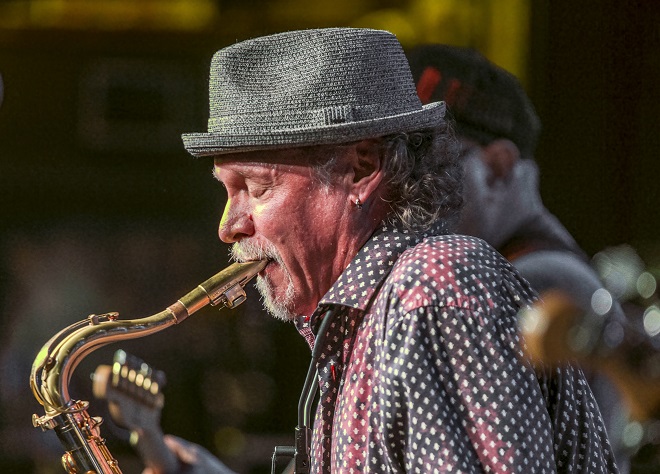