"I wanted to make people realize that, under the skin, we are all the same: "If you prick me do, I not bleed?". The blues springs from human experience: that experience is common to us all, black or white. It is an expression of hope and I hope it helps to end racial prejudice."

Dave Thomas is the guitarist and bandleader of choice for many of the big blues names visiting from the U.S. He also has a number of critically acclaimed albums in his own right that are as varied as they are classy. If you have in interest in blues music that has a clear lineage from its 1950’s and 60’s roots you owe it to yourself to check Dave out. By the late 60’s many of the blues bands were turning to more progressive, psychedelic sounds. One of the best known of the era was Blonde On Blonde. Dave joined them in 1969. The band toured extensively, sharing stages with Deep Purple, Genesis, Atomic Rooster, Marsha Hunt, Wishbone Ash, Barclay James Harvest, Steve Miller Band and many others. Blonde On Blonde had appeared at both of the Isle of Wight Festivals in 1968 and 1969 on the bill with Bob Dylan and Jimi Hendrix respectively and in 1971 they were once supported by Fleetwood Mac! In the eighties Dave travelled to the U.S. and played in blues bars across New York, Chicago and San Francisco. On his return to London Dave formed the renowned Chicago style blues band The Diplomatics. 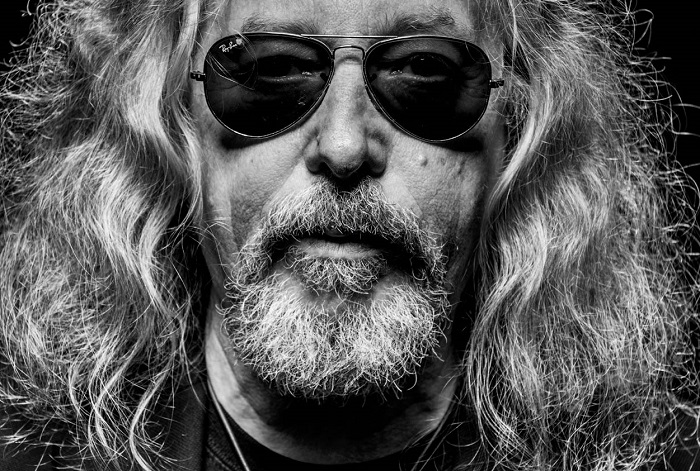 They included in their ranks Charlie McCracken, the bass player from Rory Gallagher’s Taste and harpist Laurie Garman who had recorded with Bob Marley and Freddie King. They were regular performers at the legendary Station Tavern, at that time Europe’s only 7 days a week blues venue and an early proving ground for artists like Otis Grand and Paul Lamb. The band stayed together for seven years and released one excellent Shotgun Blues album in 1999, a hard driving urban blues set. 2005 saw two albums released, Blues For Otis (inspired by his favourite bluesman Otis Spann) and Iive band album Black Dog Boogie where some critics compared Dave’s guitar playing to B.B. King. His new album “One More Mile” (2021), the first in five years, was a decade in the making, and is the first of three new releases to come. The ten new tracks feature collaborations with great musician and songwriter friends. Some of the recording sessions date back 20 years to the 1990’s and 2003, presented as an eclectic mix of styles with original material and select covers that feature Thomas’ distinct vocal style. Class, quality, authenticity and passion, Dave’s blues are real and deeply felt, never cluttered with over-elaborate notes or showmanship, just a genuine love for the music as it was meant to be heard and played.

That we are all one. Blues songs are about our shared journeys and the particular stories we have to tell through our own experience of life. Blues and Rock reinforced my emerging sense of self and my own masculinity from early on! The music took me to the USA, many times now as well as to Europe and all over the UK. I am, at heart, a hard swing travelling man.

My songs are from the heart and from my own personal experience - about love, loss, emergence and moving on. I first sang in my local Baptist Chapel. There is a deep spirituality in the blues.

Meeting and working with the great Chicago style harmonica maestro Wallace Coleman who confirmed my belief in myself as, at base, a real blues man.  Advice? Write about what you know and what you feel. Focus - advice from Paul McCartney's business manager. 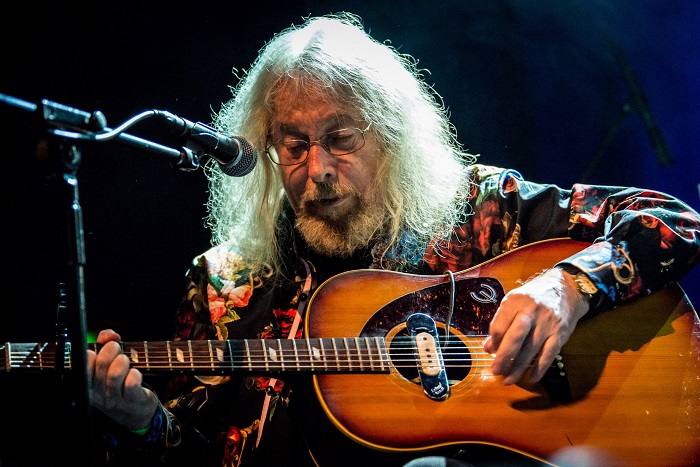 "That we are all one. Blues songs are about our shared journeys and the particular stories we have to tell through our own experience of life. Blues and Rock reinforced my emerging sense of self and my own masculinity from early on! The music took me to the USA, many times now as well as to Europe and all over the UK. I am, at heart, a hard swing travelling man." (Dave Thomas / Photo by Laurence Harvey)

Cleveland - When I was recording with Wallace Coleman in Cleveland, Ohio, I was in the studio when I heard a voice come from the control booth. It was Vernondo Parker, drummer on my album 'Repossession Blues' commenting on my vocals as I recorded "He sounds like a black guy" (a compliment indeed from a black guy!)  The blues reflects the soul of a man - through his or her voice (or chosen instrument). 'The Little Things' recorded in Jerry Freedman's studio on my album 'Coldharbour' gave me the nickname "First-Take Thomas". That was because my producer Jerry, had realized, after several takes, that I had already cracked it with the guide vocal first time. My band, Blonde On Blonde were once supported at a major UK festival by Fleetwood Mac. In 1996 I was invited to play for Paul McCartney at a special event, commemorating his hero, Buddy Holly. I was asked to join The Blues Band, depping for Tom McGuinness, by Paul Jones. Paul Jones has also made a special appearance with my band headlining at a major British blues festival. Dave Greenslade, the great keyboard player with Chris Farlowe's Thunderbirds, Geno Washington's Ram Jam Band, Jon Hiseman's Colosseum and the eponymously named Greenslade, his own ground-breaking band, is a massive creative force in rock. Dave heard me performing in concert with my band and, after the show, asked me if I'd like to work on a joint album with him. We began working together 5 years ago and the creative partnership has developed into a deep friendship. Our first original album is soon to be released.

Being on stage with a band that's cooking in front of a warm, enthusiastic audience that can dance to the blues. Hopes for the future - a better understanding from audiences of how much a committed blues musician gives and more willingness to pay fairly for it in future (through a wider chain of media channels and live concerts). To achieve alternative ways to develop real relationships with audiences and the individuals who make them up.

What were the reasons that made the UK in the 60s to be the center of Folk/Blues/Rock researches and experiments?

The USA had failed to recognize the true worth of black American music. To us in the UK it was new and inspirational - so we built our lives around it!  It was the enthusiasm and respect for black American music that led to the British Blues Boom in the 1960s in the UK. That launched many successful British blues and rock bands.  In turn this increased the awareness of great musicians like BB King and Buddy Guy and helped them reach international fame. 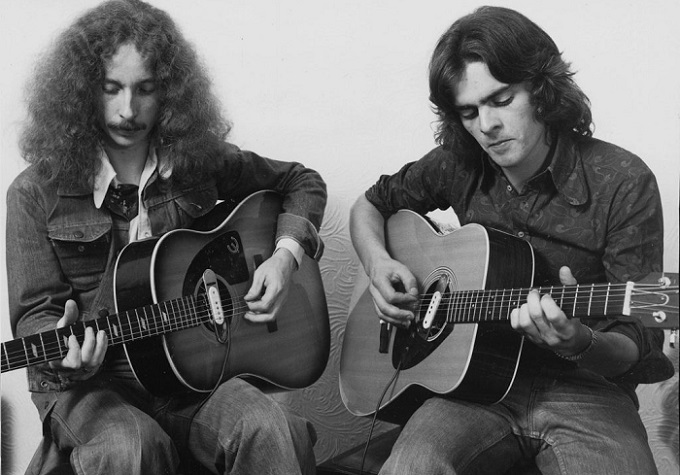 "Believe in yourself; work hard; find your own voice and never, ever give up! Remember and respect who sang or played the songs first. I am totally indebted to J.B. Lenoir, Otis Spann, James Cotton and Wallace Coleman as well as the three Kings: BB, Albert and Freddie, all of whom I have had the pleasure of seeing in concert." (Photo: Dave Thomas and Hugh Gregory, early days c.1960)

What characterizes US blues scene in comparison to UK scene? What is the status of UK Blues nowadays?

Blues in the USA will always be at the forefront for me. The huge pride in Chicago, Memphis and many other places in the USA is much more evident now.  At last American blues artists are getting the recognition and reverence they deserve. I have worked with over 40 black American musicians in the UK and I have been impressed with the energy they throw into delivering their music.  They know how to entertain!

The status of UK Blues? These days it's a bit of a cottage industry. There seems to be more rock than blues but recently there has been a resurgence of interest in real blues/traditional blues. Too many people call themselves blues musicians but are really rock musicians. There are some exceptionally talented UK blues people who deserve a bit more recognition in the US and the UK. Wallace Coleman told me that blues, to a large extent, had seemed to skip a couple of generations in the US with a lot of the offspring of blues artists wanting to be DJs and rappers!  I was glad to see the tide shift a little, for example when Eddie Taylor Jr took up his daddy's guitar.  It was great to be able to sing with him at Shake Down Blues in the UK and I am so glad we were able to hook up again at the Chicago Blues Festival before his untimely passing. Wallace Coleman paid me the great compliment of saying that he thought I played blues better than many USA musicians. I guess it shouldn't be so surprising because I taught myself by listening to Jimmy Reed, BB King, Buddy Guy, Muddy Waters and the British band leader John Mayall. This was in the early 1960s

Believe in yourself; work hard; find your own voice and never, ever give up! Remember and respect who sang or played the songs first. I am totally indebted to J.B. Lenoir, Otis Spann, James Cotton and Wallace Coleman as well as the three Kings: BB, Albert and Freddie, all of whom I have had the pleasure of seeing in concert.

I wanted to make people realize that, under the skin, we are all the same: "If you prick me do, I not bleed?". The blues springs from human experience: that experience is common to us all, black or white. It is an expression of hope and I hope it helps to end racial prejudice. 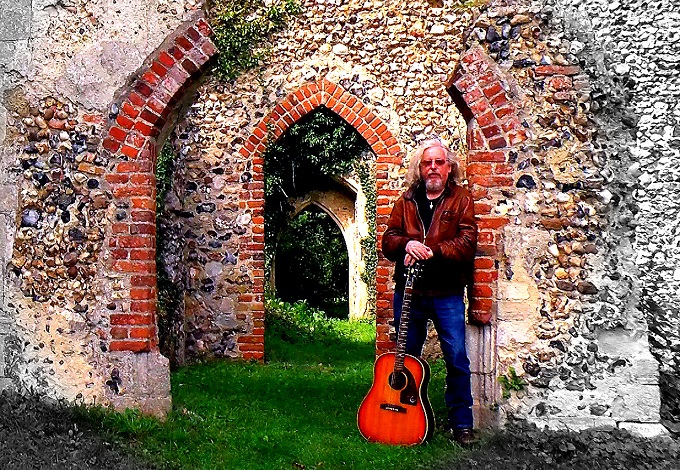