"Music has given me a sense of identity; helped me connect to past and learn how to entertain people from all walks of life. It’s helped me find my voice in this world and given me an outlet to share my voice with others."

Formed during the Jump Blues and Swing band revival in the late 90s in Kansas City, the birthplace of swing, Grand Marquis (Grand Mar-key or Grand Mar-keys) has established themselves as one of the hardest working bands in the region. The masterful six-piece horn band injects a vibrant relevance into their brand of jazz and blues music while delivering a classic, timeless ‘straight-from-the-speakeasy’ sound. The group made the finals at the International Blues Challenge in 2011 and their last album “Blues And Trouble” drew rave reviews including being voted one of the top three best self-produced recordings of 2013 by the Blues Foundation. For their eighth release, “Brighter Days” (2018), Grand Marquis explore the musical epicenters of Kansas City, New Orleans and Memphis that have influenced their twenty-year labor of love. Bryan Redmond (lead vocals, saxophone) deftly plays the role of ring master for the collection of seven original tracks and the inspired covers of a Jimmy Cliff classic and a gospel standard. 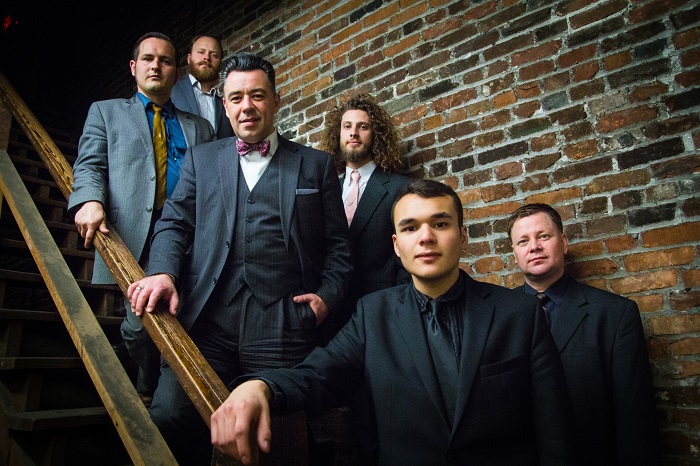 Opening track ‘Another Lover,’ kickstarts the journey by taking us to Soulsville with a genuine Stax records styled groove of infectious horn band power and phat back soul stew. The rhythm section of Ben Ruth (upright bass, sousaphone) and Fritz Hutchison (drums) then launch us headlong into the frantic jazz waltz ‘Brighter Days,’ with Redmond pushing his baritone to dramatic effect sounding much akin to David Clayton-Thomas during the heyday of Blood Sweat and Tears on the prophetic tale of “unbridled passion, revenge and redemption,” while Ryan Wurtz punctuates the message with a searing slide guitar solo. The sizzling rhumba ‘I’m On Fire’ simmers with Vegas Rat Pack style and features tremendous solos from Redmond and trumpeter Chad Boydston. The crew then ventures down to the land of dreams, New Orleans for a good old fashioned second line, for the salty and sweet ode to the high and lows of working the clubs of Bourbon Street ‘Night Shift,’ with Ruth switching to that big old sousaphone and each horn getting his due including some Pete Fountain licks and Trevor Turla blowing serious trombone.           (Intro by Rick J Bowen / Photos Courtesy by Blind Raccon PR)

What do you learn about yourself from the Blues & Jazz people and culture? What does the blues mean to you?

Being a handmade music of, by, and for common people about everyday struggles, joys, love, loss and sorrows, blues and jazz not only helps express and process emotions in a healthy way, but serves to connect us all through the realization of our commonalities rather than differences. “The Blues” is easy to play but hard to feel. A preacher tells people the story of how they ought to live, but the blues player tells you the story of how they’ve lived.

How do you describe band's songbook and sound? What is the story behind 'Grand Marquis' name?

We’re at the musical confluence of Kansas City, New Orleans, and Memphis. All those blues, soul, and jazz styles meeting and having a party. Cab Calloway sang in the song ‘How Big Can You Get?,’ “You can die to be a Duke or a Grand Marquis, but you pay to see a movie just the same as he.” So, we chose that name to go along with the tradition of naming yourself after royalty (BB King, Duke Ellington, Count Basie). "I miss the regional distinctions in music that were possible before mass-communication and radio/recordings. When styles were allowed to develop in little regional pockets. One could travel around the state of North Carolina in the 1920’s and hear dozens of “dialects” or variations of country music, for example." (Photo: Grand Marquis explore the musical epicenters of Kansas City, New Orleans and Memphis that have influenced their twenty-year labor of love.)

Touring the US over 30 cities in 2004 taught us a lot about how to play on the road and perform under any circumstance to any audience. Making the Finals at the International Blues Challenge in 2011 reaffirmed our confidence that we can go out and play the music we want to create, and it will be accepted. Some real solid advice came from the late Myra Taylor, regarding how to entertain people. She told us “Make sure you get them laughing early on. Once they’re laughing, you have their attention.” So humor is something we try to work into the live performances.

Recording at Sun Studio in 2011 was a real thrill. We hope to go back again someday. Same with the International Blues Challenge Finals. We’ve played nearly 2500 shows, so there are hundreds of stories, mostly embarrassingly funny. I’ll share one, since it’s not about me. At one show Chad (trumpet) was wearing a seashell necklace that was a little tight. As he played his neck swelled, until all of a sudden when he hit a high note, the necklace exploded all over the stage. Little shells everywhere! Most of the audience gasped in surprise, except for his dad, who was in the audience doubled over with laughter.

I miss the regional distinctions in music that were possible before mass-communication and radio/recordings. When styles were allowed to develop in little regional pockets. One could travel around the state of North Carolina in the 1920’s and hear dozens of “dialects” or variations of country music, for example. Music was shared simply by musicians traveling, whereas today I can be influenced by any music recorded in any part of the world, and nearly all recordings throughout time are accessible. Which has great benefit, but may lead to more homogenization and lack of distinct regional culture. My concern for the future is that children won’t be taught how to make music and use it as a healthy outlet for emotions. The torch must be passed on.

Professional musicians need to get paid a fair, living wage for their effort and product. Audiences should stop taking it for granted and expecting everything free or extremely low-cost. 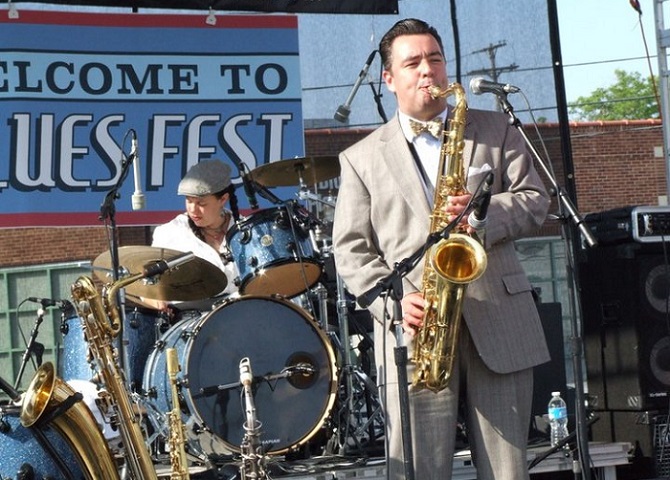 "Being a handmade music of, by, and for common people about everyday struggles, joys, love, loss and sorrows, blues and jazz not only helps express and process emotions in a healthy way, but serves to connect us all through the realization of our commonalities rather than differences."

What touched (emotionally) you from Kansas City music scene? What characterize the sound of?

Listening to the booming sound of Big Joe Turner’s voice, the rolling boogie of Pete Johnson on piano. Eddie “Cleanhead” Vinson’s wailing saxophone. Count Basie’s band tearing up a blazing-fast “Lafayette” and Jimmy Rushing’s blues vocals. Watch the movie “Last of the Blue Devils” and you get a peek into what early Kansas City Jazz is all about. That 4/4 beat rooted in the blues, swinging, shouting and moaning. It was really influential on me to be able to meet a lot of the surviving KC jazz legends in the mid 1990’s

Music has given me a sense of identity; helped me connect to past and learn how to entertain people from all walks of life. It’s helped me find my voice in this world and given me an outlet to share my voice with others. It’s taught me how to be a good bandmate, friend, how to collectively create and compromise. I’ve also learned how to run a business: sell, negotiate, budget, plan, how to pay attention to details and look at the big picture too. It’s also helped me understand what’s really important in life, take chances, realize my dreams and develop new skills, and taught me that being famous is not as important as having control over making the music you want.

What is the impact of Blues Jazz music and culture to the racial, political, and socio-cultural implications?

A lot of music can be exclusive or divisive. Our music strives to be an inclusive music that brings us together under the common banner of humanity. I think that’s one of the most important things we can do culturally right now. Our music ought to reflect our times and be informed by the world around us, so we’re not simply replicating the musical greats of the past or dwelling on nostalgia.

I’d really like to go back in time to save Abraham Lincoln from assassination. As an American, I think having him as a leader for as long as possible after the Civil War would have really helped the nation’s attitude towards race and how the South turned out economically. Of course, like any time travel, it would have a drastic effect and would likely alter the blues and jazz music we enjoy today, that was borne out of that culture of injustice. But it would be worth it! 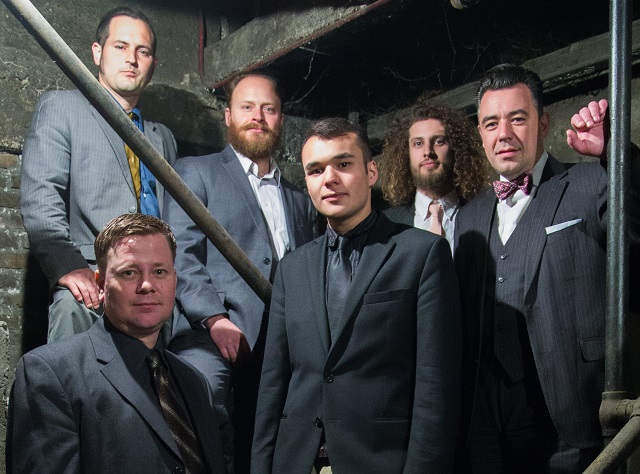