Q&A with California-based Beano Mojohand, one of the young talents driving blues/rock guitar, the next great blues sensation

"Music that made you think, that took you on a journey, that made you look within yourself, or just inspired you to make a change." 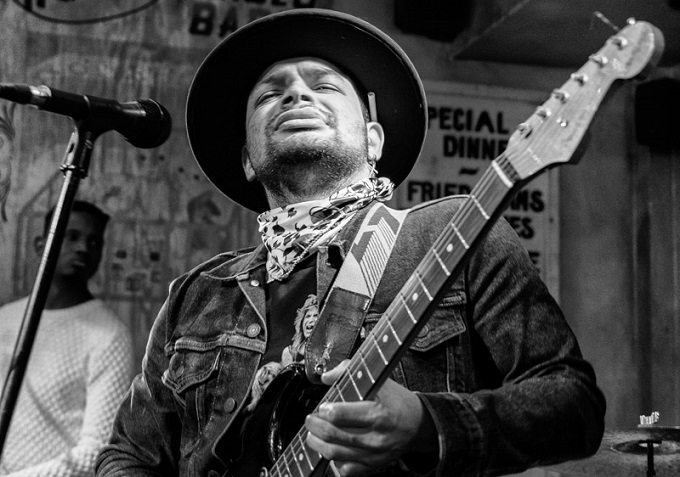 Beano, born in 1994 and raised in Lynwood, California. Beano a foster child fell in love with music at the tender age of 6, while listening to rock and blues in his foster father's wood workshop. At the age of 13, Beano was visiting Las Vegas Nevada, young and bored decided to pick up the guitar and strum along to pop songs that were being played and hasn't put his guitar down ever since. His foster child upbringing has brought him many ups and downs, but these negatives have driven him to focus on what drives his heart and soul to climb the mountain of music success. At the age of 20, his dedication, desire, discipline, drive, determination, attitude and ability paved his path to play and write blues music. At this young age he has been influenced by such greats as, Stevie Ray Vaughn, Johnny Winter, Freddy King, BB King, Carlos Santana, Peter Green of Fleetwood Mac, Albert King and the Blues Breakers, John Mayall with Eric Clapton's BEANO album; this album in fact, sealed the deal where Ernie's musical future is headed, to the BLUES! Stages get ready for the next great blues sensation.

It definitely humbled me. At this particular point of my career and life, I’ve come to believe, Blues, Soul, and Rock & Roll music posed something special for everybody. Regardless of gender, race, age, etc. This is why cities all across the world have their own respected Blues Societies and it is still alive today. I also have seen the power and potential of the music has to bring about peace. Moment of peace between the division of our countries state today. Moments of understanding to those who deal with depression and loneliness. There are young musicians like myself, that can realize on a good night on a weekly blues jams in his local dive bars alone!

I like to think my sound as an energetic, newed-up, modern take on the British blues music of the late 60’s and 70’s. But before my devotion to Blues music, I grew up to the music of Santana, and other classic rock bands, most especially Ozzy Osborne. But being a Chicano in Los Angeles, you grow up with a wide taste in everything from 90’s Hip-Hop, Low-Rider Oldies, Cumbia, Funk and Metal. So, I tried to sprinkle everything in my performance. But what is the most important to everything in my performance, is to express my love to the audience by playing the guitar as if I was giving everyone a hug and a handshake metaphorically or take one back to a happy memory through their life in a song. Those are always the best. My creative drive comes from that, all my very numerous guitar heroes, confusing times from my adolescence and my friends who I love so dearly.                      (Beano Mojo Hand / Photo by Juke Joint Anderson) 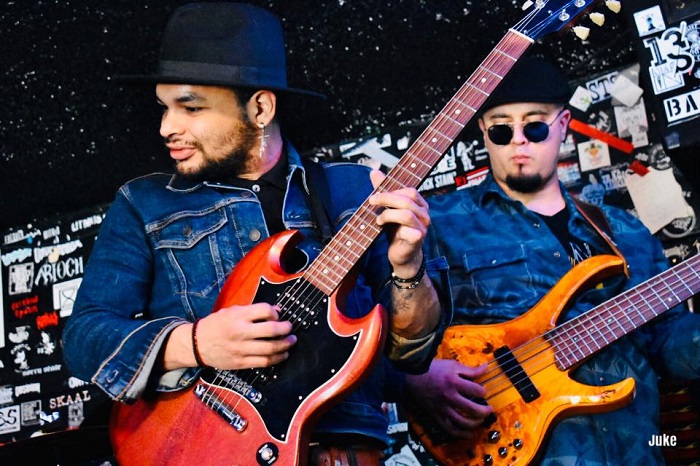 "It definitely humbled me. At this particular point of my career and life, I’ve come to believe, Blues, Soul, and Rock & Roll music posed something special for everybody. Regardless of gender, race, age, etc. This is why cities all across the world have their own respected Blues Societies and it is still alive today."

Hands down!! Meeting my manager Juanito (Ibarra). He is the reason I am here now doing this interview. Haha. Before him, I don’t think one could call bedroom jamming and playing small room jams a music “career.” Since meeting Juanito, I can now be proud to say, I’ve had a career opening up for and meeting KingFish, Malo, Kirk Fletcher and receiving props and praise from countless more big-time musicians worldwide. All within a period of two quick years, so you can call him a regular Fairy Godfather of sorts. Haha. In the immortal lyrics of Heart, “He’s a Magic Man.” He also takes care of me off the stage as well being the devoted Christian man he is. At times, I get down, unmotivated, as life at home can be pretty hectic to say the least. But this man Juanito, keeps me well anchored to the Earth to focus on reaching my goals on and off the stage. The vast wisdoms and advise he carries, and I receive from him are too numerous to count.

It was definitely the day we opened up for Malo. That very morning, I did my first interview and performance on live television to promote the concert on KTLA Channel 5 Morning News of my self-written song, Crazy Woman. The weeks leading up to the concerts knowing that Malo had a very big band complete with percussion and brass, I decided to use my cut of pay to hire a brass section of our own. My bass player went out to the local college to recruit local jazz students. Sure enough, we found some young college musicians to have one practice and did everything I could have possibly dreamed of. I also asked my dear friend, harmonica player Pierre Liechti to also play for us that night. What’s amazing to me is I lead the entire ten-piece band and the jazz students kicked Malo’s ass!

That night, my mother was in the audience and for the first time I saw her cry tears of joy for me. So, I wanted to make that moment more special, so as I was soloing on my guitar, I went out into the crowd and played for her so everyone would know who I owed my life to. I was just so very lucky someone in the crowd captured that moment on camera so I can cherish it forever, because I know one day, she won’t be here anymore, but that moment is here FOREVER! 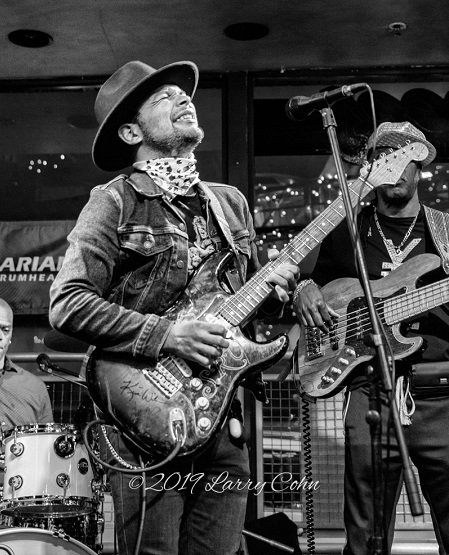 "Always be true to yourselves and others with the music you create. Stick to what you know, not what you think people want to hear. If it feels forced, it is not honest, it is not fun, which leads to bland music." (Beano Mojo Hand / Photo by Larry Cohn)

Back in the day, people actually put everything into their music. Even the Pop songs on the radio had some deep subject matters, or personal peaks into the musician’s life. Music that made you think, that took you on a journey, that made you look within yourself, or just inspired you to make a change. Of course, we still have music like this today, but has sadly drowned out and overlooked from the soulless regurgitated music that the major record labels bombarded us with. I’m sure it’s not the artists fault, because they are demanded to make music that benefits the labels wallets and not the world. The hope is to see more integrity in music again being pushed out in front. We need to look into the music of the past and revive newer approaches to them as great artists like Bruno Mars expresses through his lyrical genius abilities.

What would you say characterizes L.A / California Blues scene in comparison to other local US scenes and circuits?

It seems like there is just a tremendous amount of opportunity as a musician’s weather you’re a beginner, intermediate of advanced, to express yourself as a musician or a bluesman. As a whole, there are jams from San Francisco through LA, all the way down to San Diego that are hosted by small venues or the blues society.

Always be true to yourselves and others with the music you create. Stick to what you know, not what you think people want to hear. If it feels forced, it is not honest, it is not fun, which leads to bland music. You always got to trust your gut, and it is okay to be spontaneous and try something different on stage that you have never done before.

What is the impact of Blues and Rock on the socio-cultural implications? How do you want it to affect people?

The blues/rock scene is more excepted ad a whole in Europe it seems. I would love to see the root of music, the blues, deep into the souls of socio-cultural people of today and moving forward.

It would be an amazing time and Fulfill my dream to play 24 hrs. straight starting in Cuba, Virgin islands, Hawaii, Netherlands, Amsterdam, Finland, London, Ireland, Germany, Chicago, Mississippi, Memphis, New Orleans and finish all throughout California to express to the world what's in my heart since I was 6 yrs. old. And that's the blues! 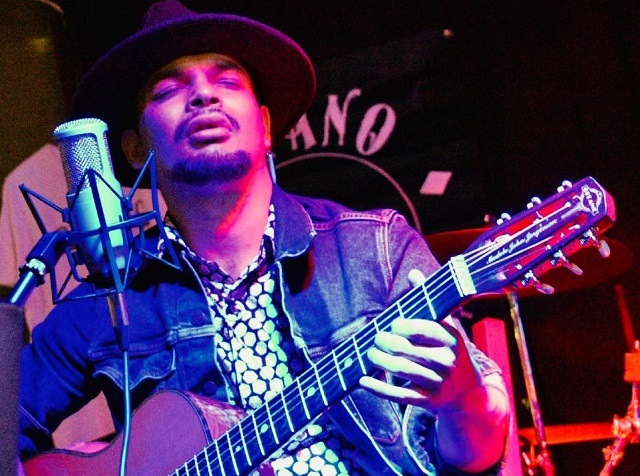