"Blues simplifies and with such emotional fortitude that much of what you speak is broken down to the bear bones. Music of the heart and soul should and does have the power to do such."

Dan and the Lightnin' Willy are an acoustic duo focusing on Pre-War, Piedmont and Country Blues. In doing so they are paying homage to the greats such as Sonny Terry and Brownie McGhee, Robert Johnson, Blind Boy Fuller and Mississippi John Hurt, to name a few. For all those with a hankering for some old timey roots music that'll take you to the front porch and caress you like a warm southern breeze, this is for you! “Rott'n Dan & Lightnin' Willy” (2019) first self titled release is a handful of original compositions as well as a fine selection of some of the duo's personal favourites. It's a journey through the American south and the first half of the 20th Century, a time capsule in itself. 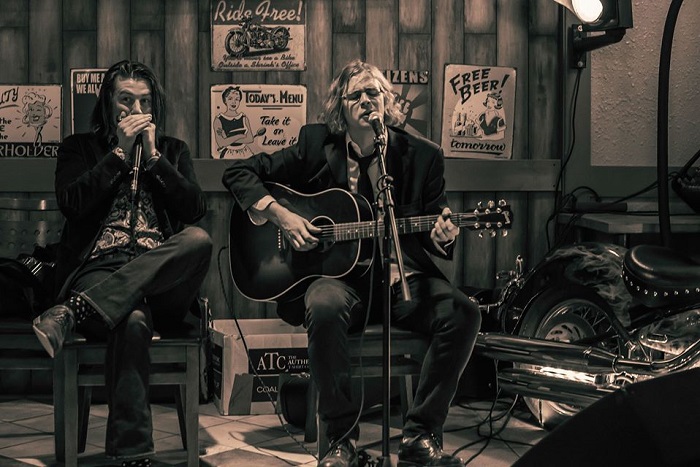 Rott'n Dan (aka Dan Shinnan) & Lightnin' Willy (aka Willy Ryan) weave in and out of the various styles from the Mississippi Delta with songs such as Satisfied and My Belle, they touch into the Chicago sound with Coliseum Station Blues and the Ragtime and Vaudevillian era with their Lightnin' Rag and the You Gonna Quit me Blues by the great Blind Blake. Finally venturing into the Piedmont sound and a few other places in-between, country stomping and whoopin' the whole time! Lightnin' Willy demonstrates his ability to glide through various finger picking styles with Rott’n Dan excelling at the harmonica, both complimenting each other vocally all the while. These two lads from the Canadian north pay homage to the pre-amplified blues that laid the groundwork for so many, and may this be but the first offering with much more to come from these two just the same.

Rott'n Dan: I question myself and ask myself, "Has the world always been so wahoo, so crazy and so absurd?" Yes, that's a broad but hopefully understandable quote/question to state. My answer to this is... "Yes, it most certainly has been, is, and will continue to be so." As much as one could rave on about being born in the wrong era, I won't for I know that I'm blessed to live in a day and age in humankind where blues still exists and is in my mind a prominent and much needed genre of music, art form and a way of expression that has served so much of a purpose for mankind and of course the evolution path of music itself. What I'm getting at via my first question and to answer your first question is that the Blues is very much needed and is a necessity whether the masses know it or not. It's a healing thing. As far as journeys go, when I picked up the harmonica and found the Blues it set my life on a true and musical path where the sound of it can feel like the first time every time and to perform and play it can be the best high I know. May the journey and journeys within continue.

Lightnin' Willy: The blues has taken me farther away from my home than anything else ever has, and I hope that it continues to do so. In terms of world views, it made me despise any kind of racism in a serious way. The musicians that I loved so much being treated so poorly by people who sucked really aggravated me, and still does.

How do you describe duo's sound, music philosophy, and songbook? What were the reasons that you started an acoustic duo focusing on Pre-War, Piedmont and Country Blues researches?

Rott'n Dan: We play acoustic, pre-war, country blues and music close to earth. Some of this original numbers and some of our musical idols and forefathers. It's a form of roots music and for us, music that was the roots of our musical growth and original attraction. We'll both admit that on our respective instruments, some of the first artists we listened, emulated and strived to play like are still top of the list and are in the realm of the music we play as a duo.

Lightnin' Willy: It felt really nice the first couple times me and Dan got together and played that kind of music. The idea to focus the duo around those styles came from a deep love of the pre-war sound. It’s been a very organic, easy going process that just keeps getting more enjoyable every time. 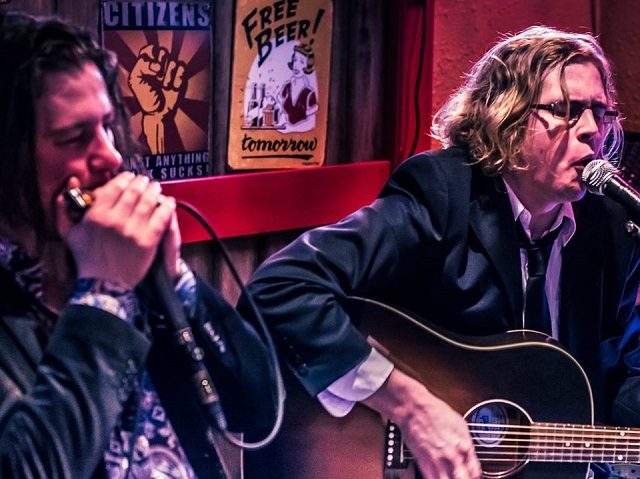 "The blues has taken me farther away from my home than anything else ever has, and I hope that it continues to do so. In terms of world views, it made me despise any kind of racism in a serious way. The musicians that I loved so much being treated so poorly by people who sucked really aggravated me, and still does." (Photo: Rott'n Dan aka Dan Shinnan & Lightnin' Willy aka Willy Ryan)

Rott'n Dan: Oh there's a plenty that come to mind, some being raucous, rowdy and raw while others being very sincere and heart felt. Some being on a stage playing for a vast audience and some in the most intimate of settings. Sorry to not specify but I'm finding it hard to do so at this moment but in general I can't wait for more grand memories to come my way. I can't count on one hand the circumstances, shows or happenings where I've thought to myself "what the hell am I doing here" and that's a damn good thing. I feel as if the path is true.

Lightnin' Willy: A real good one was at Red’s in Clarksdale. It was the Saturday night after the IBC’s and a bunch of folks from all over were there. At a point, I was playing bass, a gal from Illinois was singing, a guy that used to be in Hank Williams band was playing guitar, and on my left Joe Murphy and Rott’n Dan were both blowing harp. I remember at the time thinking “this is pretty awesome”. We went there earlier in the day too, and got to hear Red himself tell us incredible story after incredible story.

Rott'n Dan: I'm simply saddened that I'll be unable to see the greats and true giants of the Blues live. By no means to I care to take away from what I have seen such as BB King, John Mayall, Charlie Musselwhite or Buddy Guy but to hear older generations speak of them seeing Albert Collins, Muddy Waters, Big Walter, Sonny Terry and Brownie McGhee (to name but a few) fills my heart with joy but as well with envy. No one lives forever but the music can and does and that's immortality in my eyes. I guess all this could play into the time machine question anyhow, but we'll get to that later. I love the old school true blues sound but as well understand the stretching of the genre must happen and that it will happen. May a balance of that always remain and be found.

Lightnin' Willy: I think the shuffles used to be better. I fear that the shuffles will get worse, but I hope that they get better. "Blues has the ability to distill socio-cultural problems into a few verses, which is such a powerful thing. An anthropologist can write a paper that is full of incredible insights, but its undigestible for most people.  Songs, however, are immediately digestible and have the power to speak to the everyday person in a direct way." (Photo: Rott'n Dan aka Dan Shinnan & Lightnin' Willy aka Willy Ryan)

Rott'n Dan: Oh this is a tough one and I don't want to so sound so absolute but I so feel that there is some absolute garbage music out there that's so fake and stinks to high heaven. Factory made, produced for the masses bull shit ya know. I just wish people could see through the shit and realize that the the true grit is still out there and it's not what's being shoved down everyone's throat that's for sure. But hey, I'm an old soul and what moves me may not move you and just the same vice versa. Dial into whatever you want to dial into really. It cracks me up though, when people realize how much is ripped off, reused and recycled from music of the past.  As far as change goes, artists should reap a fair bit more profit from the many sources of mass streamed music.

Lightnin' Willy: Everything is a bit too loud. Don’t get me wrong, I like it loud, but it needs to be toned down just a bit.

Rott'n Dan: In this day and age and what with the internet and the quick grab of information existing, anyone from anywhere can learn and become as good as they want to be or strive to be on any instrument or in any art form. As far as the Blues in Canada goes, there be some damn good players up here and we're mighty proud of it!

Lightnin' Willy: The blues scene in Canada is definitely smaller than it is in some places, but I think that often builds a greater sense of community and less competition. As well, there’s lots of organizations (local blues societies, federal and provincial arts foundations) that actively support musicians in numerous ways. As far as local blues, I’ve heard that Jimmy Gibouche used to play guitar in Harpdog Browns band. Maybe just a rumour, but that would’ve been cool to see.

What is the impact of Blues music on the socio-cultural implications? What are the most important lessons you have learned? 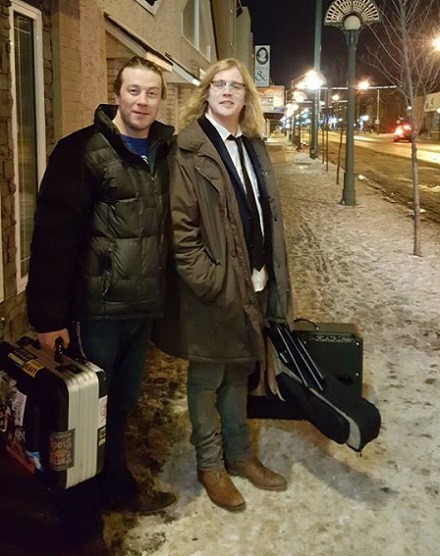 Rott'n Dan: Blues simplifies and with such emotional fortitude that much of what you speak is broken down to the bear bones. Music of the heart and soul should and does have the power to do such.

Lightnin' Willy: Blues has the ability to distill socio-cultural problems into a few verses, which is such a powerful thing. An anthropologist can write a paper that is full of incredible insights, but its undigestible for most people.  Songs, however, are immediately digestible and have the power to speak to the everyday person in a direct way.

Rott'n Dan: I'd simply want to witness Otis Redding perform, especially in a juke joint or some low down gritty environment. I believe him to be the greatest voice to ever grace a stage and would have loved to have witnessed and to have felt his energy first hand. He died much too young. As well, ancient Rome in all its glory wouldn't have been a sight to see alright.

Lightnin' Willy: I’d want to see Blind Blake play in person. Just to watch that level of playing live would be something else.