"Blues has connected separated cultures. The white and black gaps (generally speaking) are by no means perfect but in my opinion they would be much more divided if it wasn’t for blues music."

James ‘Buddy’ Rogers: By My Side

Most blues musicians can proudly recall their age and stage in life when they received their introduction to blues music. It is a coming of age in a sense – before the blues and after the blues. For Vancouver’s James ‘Buddy’ Rogers, life as he knew it was inherently different after discovering the blues. James ‘Buddy’ Rogers learned to love the blues close to home. His dad, Bud worked for the railroad and often brought home records and a guitar and by the time Buddy was 10 he was lifting licks. By 11 he’d formed a band and started gigging. Within two years he was a regular at local blues clubs. At 15 his band Texas Storm was being booked by Canada’s top agency for opening concert slots. “My dad went to the liquor control board and got a license that he would take to bars so I could legally play there. I began playing shows sitting in with all the great blues guys around Vancouver back then. The ones that really stand out, who took me under their wing, so to speak were Muddy Fraser, Tom & Jack Lavin, Jim Byrnes, Wailin’ Al Walker and Russell Jackson." At the age of 19 Rogers teamed up with former B.B. King bassist Russell Jackson and began a tour that lasted five years. 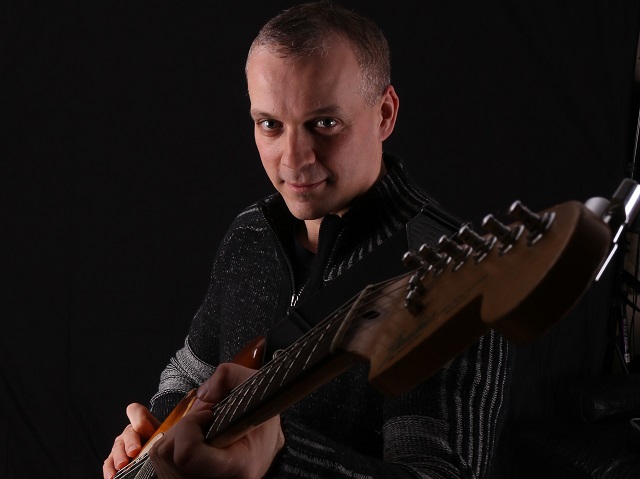 Based in Kansas City, they played an endless string of clubs, concerts and festivals sharing the bill with Canned Heat, Sam Taylor, Holmes Brothers, Elvin Bishop, Kenny Neal, Katie Webster and countless others. In 2000 Buddy started his own band and played blues clubs across Canada and Europe. When he wasn’t working under his own name he appeared on US tours and recordings with many other blues acts. Rogers new album 'By My Side' (2016) includes ten originals by Rogers and one cover made famous by Freddie King ‘Goin’ Down’. Rogers is backed by long time band mates Mike Wedge on bass and James Badger on drums. Joining the CD on piano, B3 and wurly is Texas native Lewis Stephens who is known for his work with Freddie King, Delbert McClinton and Mike Zito. James ‘Buddy’ Rogers’ main influences on guitar – Johnny Watson, Jimmie Vaughan and the three Kings – plus years of being a blues road warrior have helped shape him into a well-seasoned blues guitarist. By My Side showcases a guitar and voice forged by a life in the blues. James ‘Buddy’ Rogers; his music is here to stay.

Blues has taught me who I really am as a person. Both on stage and off. We all have the blues which is not always being sad and blue like many people categorize blues. It’s about being in love, having fun and all the things in life that we all enjoy.

The blues means everything to me. Without it I would not be who I am today. None of us would know music as we know it today without the blues. Today we often consider legends like Muddy Waters traditional but in his day guys like Robert Johnson were considered traditional and Mud was actually top 40, innovative and a leader of new sounds. The blues are the roots and the rest are the fruits!

How do you describe James Buddy Rogers sound and songbook? What characterize your music philosophy? 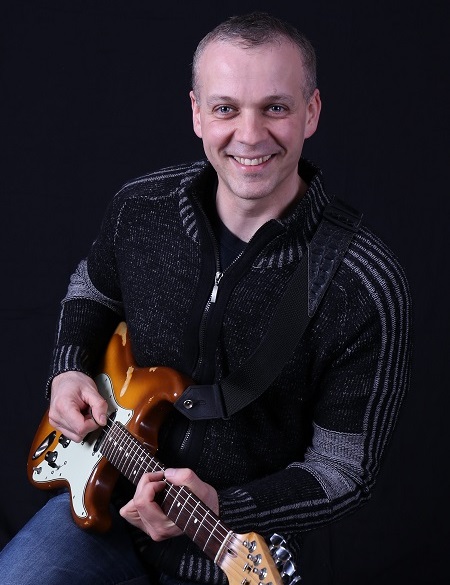 My sound is comprised from many influenced. My main guitar sounds are a mix of Johnny Guitar Watson, Jimmie Vaughan, Robert Cray and the three kings (BB, Freddie & Albert). There are of course many other influences but these are the main ones for me on guitar. My vocal style is considered less traditional when it comes to singing blues. I really like the sounds and styles of the Motown singers like Donny Hathaway for example. I never really read too deep into the theory of music as I like to just trust my ears. If it sounds good then it’s right. How and why it came about is not something I focus on whether I am writing songs, playing on stage or producing and engineering music.

Other than my late father ‘Buddy Rogers’ I owe much of where I am today to two really good friends. Russell Jackson (former BB King bassist) and Tom Lavin (Powder Blues). I met Tom back in about 1989 when I was a kid and played many opening shows for his band and other Canadian rock bands like Trooper, April Wine etc. Around the age of 16 or so I met Russell and later joined his band by the time I was 19. I toured extensively with Russell around North America for five years until 2000 when I left to start businesses outside of the music business as well as front my own blues band. That time during the 90’s is where I really cut my teeth with the blues. I met and shared the stage with many blues legends over those years. The best advice I got was during a time I got to hang out with BB King. He told me that I thought I had real soul and that no matter who says what keep playing. That meant a lot to me coming from the king of the blues and I have taken that advice with me.

There are so many I don’t even know where to begin. Some stories I should probably just keep to myself! Haha. I have enjoyed many opening sets with bands like the Fabulous T-birds, Elvin Bishop, Canned Heat etc. Studio sessions are always a big learning experience as often what you think you played isn’t what people hear.

One good story is in the 90s I found a ‘NO MUSTANG SALLY’ sticker. To this day it is still on my guitar. In November of 2011 on Canadian Remembrance Day I got suckered into playing this song. I left that gig and a few hours later my guitar and amp were stolen. My gear was not happy about the song I think!? I won’t go into many details but 6 months later my guitar and amp surfaced on a website selling used gear. I pretended to buy it back and when confronted by 6 guys (who I thought were going to mug me for the money they thought I had) a fight broke out, I won and was arrested and charged with assault. I got my guitar and amp back and the charged dropped. Now that’s the blues! This is the gear I used on this new album. 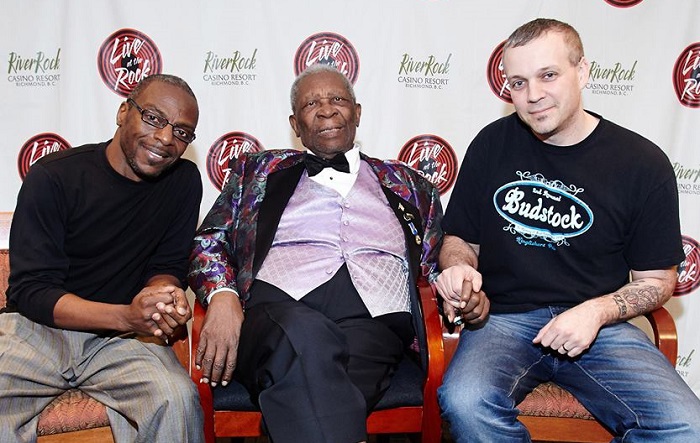 "Blues has taught me who I really am as a person. Both on stage and off. We all have the blues which is not always being sad and blue like many people categorize blues. It’s about being in love, having fun and all the things in life that we all enjoy." (Photo: Russell Jackson, BB King & James)

I don’t miss much from the past. Of course it was fun and full of great memories but I like to keep the sun to my face and wind to my back and live in and make new memories. There are no hopes or fears with music. I would like to get back to touring more than I have been the last few years but I am at a place in life where I play music because I want to not because I have to.

That people would go back to focus more on the quality of music than the ‘show’. Video really did kill the radio star.  In any genre people talk of great shows from what they see, very rarely from what they hear. The days of a Brian Adams or Bruce Springsteen on stage in a t-shirt and jeans without light shows to just play music seem to be gone. People want to see musicians wear matching suits, outrageous costumes, dance moves and anything else that makes then noticeably different and distracts people from the music. I personally like to focus on the music. I don’t wear fancy clothes or matching vests with the guys in my band.  We get on stage and play our asses off. Some like it. Some don’t.

I can only speak of the local blues scene I grew up in. I found my time in the late 80s and early 90s very interesting because I started out at the tail end of a scene where there were lots of venues to play and live music six to seven nights a week. Then it became three nights a week, then only Fridays and Saturdays. Now it’s mainly single night shows so if you play three or four shows in a week you are at three or four venues not one venue. It does seem to be this way across North America so I think many people on the scene can relate to this. The recent trend is solo acts now. Very few bands anymore and often these solo acts playing in the corner of someone’s living room. 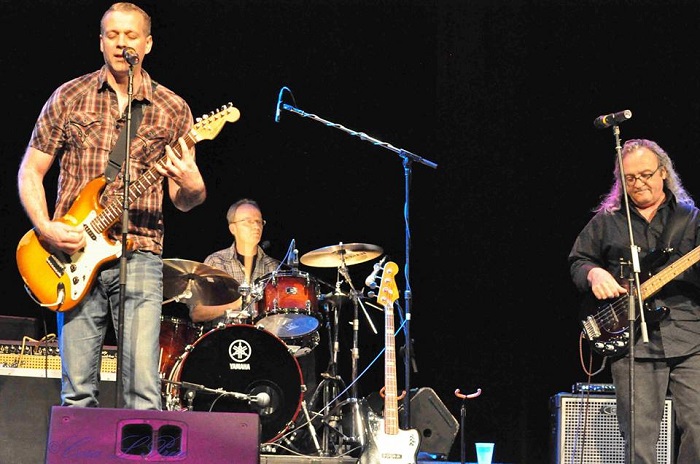 "The blues means everything to me. Without it I would not be who I am today. None of us would know music as we know it today without the blues." (James 'Buddy' Rogers on stage / Photo By Cora Price)

What are the lines that connect the legacy of Blues from US to Canada? What touched (emotionally) you from the local circuits?

For me I was introduced to blues from my dad in the late 80s. From what I understand Canadian bands like Downchild and Powder Blues really put blues on the map in Canada. Powder Blues were the records my dad was making me listen to and becoming very close friends with Tom Lavin of Powder Blues over the years has been very emotional. He has helped me in the music world over the years and most recently with producing my last album (2012) which garnered a JUNO nomination. We have worked in business together outside of the music business and he is very entrenched in my personal life. To become this close with the guy whose records my dad brought home as kid has been a wild ride. From meeting a strong influence to becoming very close friends.

Blues has connected separated cultures. The white and black gaps (generally speaking) are by no means perfect but in my opinion they would be much more divided if it wasn’t for blues music. Ray Charles is a simple example of this. Refusing to play for segregated crowds and being banned from the state of Georgia to getting an apology many years later. None of this was possible without the blues.

Musically speaking I would go back to the days of Chess Records when Muddy Water and Little Water were amplifying music and watch the formation of Rock N Roll and maybe steal a few more licks that didn’t get recorded. 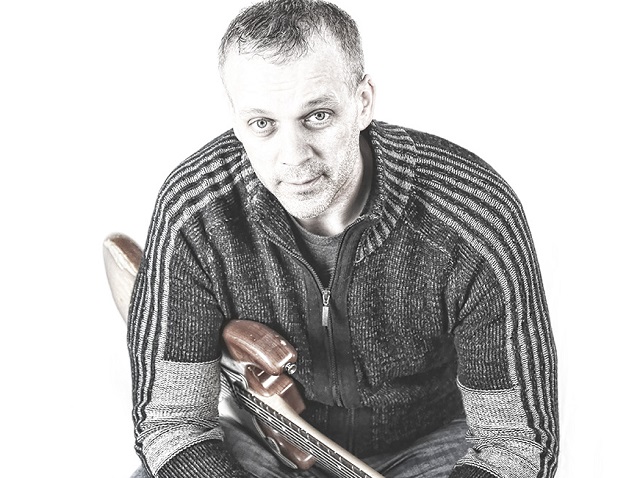