Q&A with Canadian roots music hero Rick Fines, has had a long and storied career as one of the hardest working musicians

"The more you express yourself, the better you know yourself. Knowing who you are and what you like and don't like sets you on your path."

Steeped in roots music, Rick Fines crafts a unique blend of warm-hearted blues, juke joint folk, and dockside soul that both embraces and defies the genres that influence him. As a veteran of the North American blues and folk circuits, he engages audiences with captivating songs, diverse guitar styling and his signature vocal growl. Rick’s storied career has seen him working in stellar collaboration and as a successful solo act. First gaining attention as part of the legendary Jackson Delta, he’s since released four solo albums, another with his own Rick Fines trio, and a critically acclaimed disc with fellow troubadour, Suzie Vinnick.  Along the way he has racked up both awards and accolades. His 15-year stint with Jackson Delta received both Juno and Handy award nominations. His partnership with Suzie garnered a Maple Blues Songwriter of the Year Award. On his own, he’s pulled in two more Maple Blues Awards (for Solo Act of the Year), as well as an astonishing eight other nominations. While his songwriting chops won him a 2003 International Songwriting Competition, he’s equally proficient on guitar – having played for legendary blues piano player Pinetop Perkins, songstress Colleen Peterson, folk icon Penny Lang, and many others.                                       (Photo: Rick Fines) 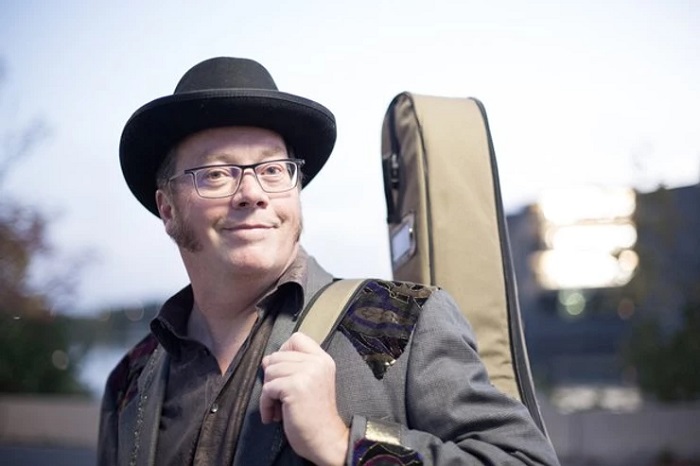 Equally at home alone at the microphone or leading a stage of fellow players, Rick has performed everywhere from the National Gallery and Governor General’s Garden Party to Montreal Jazz, Ottawa BluesFest, the Edmonton Folk Festival, and the New Orleans Jazz and Heritage Festival. International tour highlights include visits to France, Italy, Scotland, Newfoundland, BC’s Gulf Islands, and the Northern Arctic. Rick believes in the transformative power of music. When not performing, he can be found teaching and sharing with students across Canada – including work with the Blues In The Schools programs in Ottawa, Saskatoon, Toronto, and Yellowknife. He’s also participated in the Ontario Arts Council’s Artists in Education program. Fines’ newest release, Solar Powered Too (2020), was recorded during a global pandemic, with the bulk of the songs recorded in a little gazebo in the North Kawartha woods, with solar power. With 11 originals and co-writes, and one cover of a Jesse Winchester song (That’s What Makes You Strong), Solar Powered Too is a powerful release, ripe with vivid images of sorrow, optimism, and the complexities of life.

Through my lifelong love of Blues and studying of African-American culture, I grew to understand some of the implications of racism and class structures in North America. Through Folk and Blues festivals, I have gained insight into social and political constructs from around the world and met many progressive thinkers.

I started as a rock n roll guitarist who loves the Blues. I have always been fascinated by great songwriters who explore new insights into the human condition. I find as I get older, I search for truth in words and music and seek to match musical landscapes and melodies with emotion and personal philosophy. I like to tell stories. I feed off nature.

Any time I meet musicians or artists who seek to dig deeper into what makes us tick, or how to better convey an aesthetic, I am inspired to continue the journey. 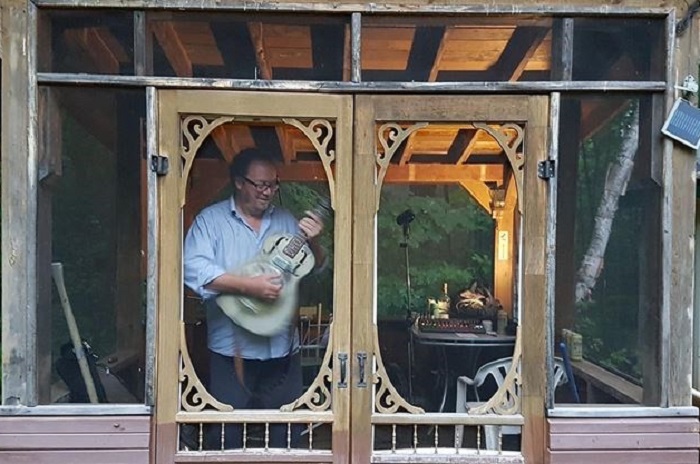 "Through my lifelong love of Blues and studying of African-American culture, I grew to understand some of the implications of racism and class structures in North America. Through Folk and Blues festivals, I have gained insight into social and political constructs from around the world and met many progressive thinkers." (Photo: Rick Fines in his solar power cabin, North Kawartha woods, Canada)

How started the thought of Solar Power cabin? What touched you teaching the Blues In The Schools programs?

My cabin has solar power because there is no hydroelectricity for miles, and I chose to install the solar array instead of spending the money to record in a studio.

I love working with children in Blues In The Schools programs. I like to pay back to the blues by sharing the story of the blues and how such a powerful music can come from human celebration of life and a commitment to overcome the most trying circumstances. I like telling children that they can create music. Not all kids hear this at home.

Are there any memories from gigs, jams, open acts and studio (or cabin) sessions which you’d like to share with us?

Festival stages -especially workshops in the style of Canadian folk festival workshops, where musicians are put together for the first time- are places where once-in-a-lifetime experiences happen. Many are the times when I have just met someone and then we are deep into a song for the first time, the only time. Off the top of my head, I recall meeting the trio Fruit, from Australia, as we sat down to play a workshop. Next thing there were ethereal sounds of complex vocal harmonies a bow on a viola, all swirling around a song I had just written. We had such fun that we got together when the festival day was done and played music around a campfire until the sun came up. 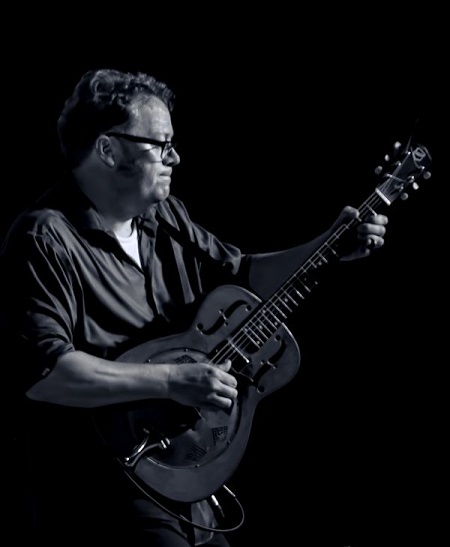 "I like to reflect on my values and my feelings. Music gives this to me. If I can play a small part in anyone else doing the same, I'm grateful."

The more you express yourself, the better you know yourself. Knowing who you are and what you like and don't like sets you on your path.

I like to reflect on my values and my feelings. Music gives this to me. If I can play a small part in anyone else doing the same, I'm grateful.

I'd like to have a day to play songs and talk with Mississippi John Hurt.