Q&A with female blues musician Cathy Grier, plays a fundamental style, channeling the great artists of the past

"Music has always been a place for people to find common ground. And to also point out where things aren’t going so well. We still have so far to go, and yet music is a fantastic bridge that brings people together. Think of protest songs, sea shanty’s, certainly gospel songs that preach unity. It has and always will be part of our culture."

Cathy Grier plays a fundamental female blues style, channeling the great female blues artists of the past including her major influences Etta James and Alberta Hunter. Cathy Grier singer songwriter guitarist, moved to Sturgeon Bay, WI after meeting bassist Tony Menzer during a Blues night he hosted at Badger Bowl in Madison in the fall of 2015. Cathy was traveling around the Country, she called her Wandertour, in search of adventure, open spaces and a change of life from NYC where she lived 20 years. She bought a car and along with her 2 standard poodles Etta and Lily, began an adventure a la Travels With Charley (Steinbeck), 29 states 18000+ miles. In 3 years, Cathy has performed hundreds of shows throughout Door County and Wisconsin, as a solo Artist including winning Paramount Music Association (Grafton) Solo and People’s Choice Award in 2017 Blues Competition which earned her the right to compete in Memphis in 2018. She formed the band Troublemaker’s in 2017.           (Cathy Grier / Photo by Jen Brilowski) 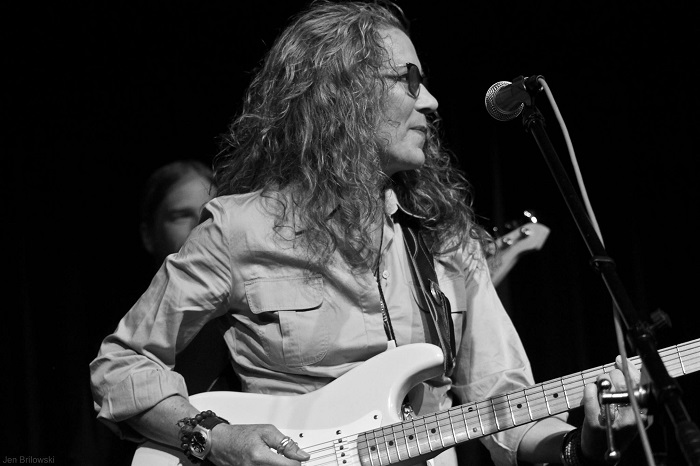 Her four decade long career is a rich musical tapestry with career highlights ranging from an MTV video in the 80’s, opening up for legendary artists Laura Nyro, The Band, and Joan Armatrading. She Lived in France in the 90’s, toured and wrote for many artists, including a #1 dance hit. Cathy spent 20 years in New York mostly performing under the name NYC Subway Girl as part of the Music Under New York Program, and was featured on CBS Sunday Morning, and performed at legendary Avery Fisher Hall. She created “The Inspiration Project,” a video mini-doc series, where she asks passersby a simple yet complex question “What inspires you?”. At an early age Cathy loved the Blues and had a chance encounter when she was 17 with John Lee Hooker. As a young social activist, Cathy learned you can write about the environment and a breakup at the same time (recalling Joni Mitchell’s “Big Yellow Taxi) and loves to be socially conscious in her songwriting. She believes music is a healer and a powerful tool that crosses boundaries to help diffuse ignorance and hate. Her love of performing the Blues has found a home in Wisconsin! The new album “I'm All Burn” (2020) of Cathy Grier & The Troublemakers, is a 16-song sonic watercolor painted across almost every facet of the Blues landscape. I'm All Burn is her 14th album; it fits perfectly in with her musical canon, but also serves as a perfect introduction for those new to her world.

How has the Blues music and activism influenced your views of the world and the journeys you’ve taken?

I believe that music has the most beautiful capacity to invite people to see how we can lift each other up, and not divide us.

Where does your creative drive come from? How do you want your music/lyrics to affect people?

I am lucky to be a creative, whether it’s cooking or gardening or playing my guitar, I find my creative drive comes from this amazing life, and world we live in. I always hope that my lyrics and compositions affect people positively, and if in the process they can reflect in a way that makes them understand then I feel humbled.

What touched you from your travels around the world? Do you find any similarities between world musics & Blues?

I can see Blues is not just a genre but a way of a social, cultural condition of the people. Blues expresses the deep emotions that come from the fact that we as humans are capable of great things even while situations, present dire conditions. Blues doesn’t need to be translated. It is easily understood in any language because the musical style and lyrical content. And why it so easily translates from a World Music perspective. Every country has their own version of musical cultural heritage. American Blues has a direct lineage with a very tragic part of our history. Which is so bittersweet. The music that originated in Africa was brought to America, had an outlet to express struggles by those forced to live in a world of slavery. The African musical traditions that came here to the US and one that still exists today, is rich and deeply moving.

That as long as I stay true to my art and believe that I can make a difference, then I will always be a professional musician. That music is a great equalizer, it translates every language and brings people together. 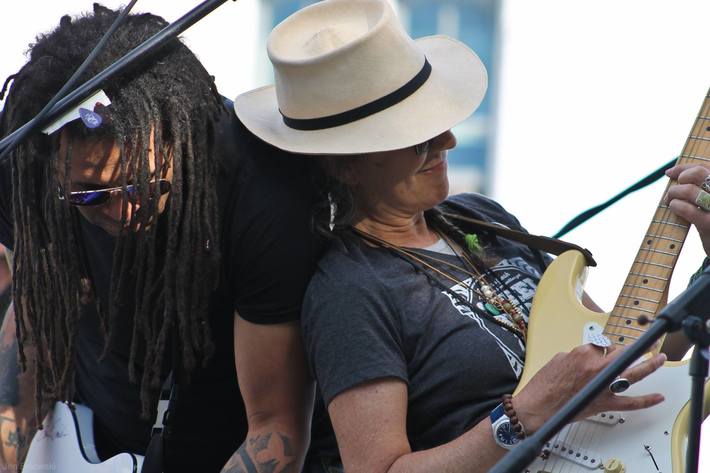 "I am lucky to be a creative, whether it’s cooking or gardening or playing my guitar, I find my creative drive comes from this amazing life, and world we live in. I always hope that my lyrics and compositions affect people positively, and if in the process they can reflect in a way that makes them understand then I feel humbled." (Cathy Grier / Photo by Jen Brilowski, Sturgeon Bay, Wisconsin 2016)

Are there any memories as a busker musician in the subways of New York which you’d like to share with us?

Busking in the NYC subways was an amazing experience. There are so many stories. I guess the most important is that 1000’s of people would pass by me in any given performance, and how I could reach those people without them ever stopping. Any time you have mass transit that moves millions of people daily, it becomes a part of the rich crazy fabric of the urban environment. Specific stories I loved were of children stopping, spontaneous jams with other musicians, tap dancers, rappers, and dancers, How the discovery of a musician performing in a public space by a commuter could bring comfort and possibly the only time they might ever experience a concert. Also witnessing all the crazy things people carry through the tunnels- I’ve seen a surf board, a huge plant, furniture etc.

Your question actually makes me think of what I don’t miss, that musicians of the past were segregated or overlooked. America in the 1900’s, musicians of color couldn’t enter the front door, of the venue they performed in, or stay at a nice hotel, eat in the same restaurant as caucasians. I don’t miss the songs that objectify women. I love BB King, but he was like so many notorious womanizers, and to hear songs like “Don’t Answer The Door,” not only being recorded but played to this day is personally infuriating. But that music, it’s so incredible. To know that women like Big Mama Thorton was the one who sang Hound Dog, and that Elvis Presley was able to make a hit, or the Rolling Stones too. Of course, they supported Howlin Wolf, BB King. But Presley, Stones and so many other artists owe their careers and a huge debt to those who provided the material and the musical tapestry to build on. What I would like to see in the future is women being able to be given a chance to perform without the huge high bar that is set for us.

What would you say characterizes Wisconsin blues scene in comparison to other US scenes and circuits?

Wisconsin has some very important Blues history with the Paramount Furniture Factory in Grafton- early 1900’s they made Victrola’s (phonographic record players) and sold with a 78 rpm recording of some of the greatest Blues players who traveled from the south to Wisconsin to record. Artists like Bessie Smith, Geeshie Wiley, Elvie Thomas, Blind Lemon. They call it the Blues trail. Could it also be Stevie Ray Vaughn? Buddy Holly, who brought so much history here. Maybe it’s the fact that we’re not far from Chicago. I’m from NY, I could drive to Memphis in less time than driving to NY. I think there is a melting pot here. Wisconsin is a great location to stop over if you are touring. The Blues scene pre COVID (2020) had so many clubs and Blues venues, only now starting to reopen if they haven’t sadly shuttered their doors forever. Blues is a genre that audiences are very much aware of and love to support. I had many great musicians from Wisconsin play on my album. I am newly a Wisconsin resident, and certainly when I hear someone is from Wisconsin, I am no longer surprised. 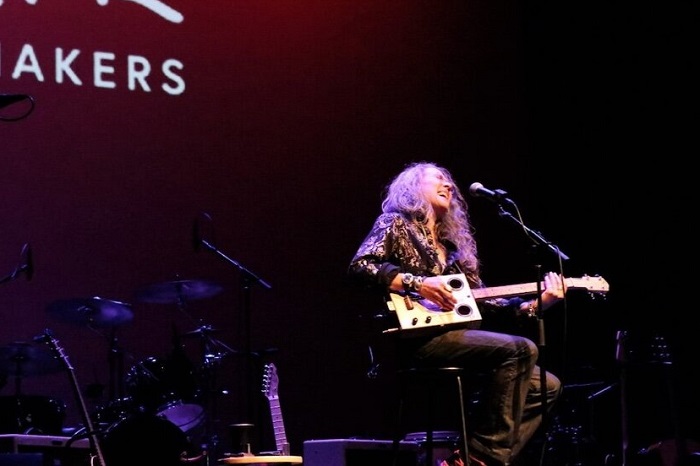 "I can see Blues is not just a genre but a way of a social, cultural condition of the people. Blues expresses the deep emotions that come from the fact that we as humans are capable of great things even while situations, present dire conditions. Blues doesn’t need to be translated. It is easily understood in any language because the musical style and lyrical content." (Cathy Grier / Photo by Bruce Rose)

It is a man’s world for sure for many of the reasons that I’ve already expressed. A female guitarist shouldn’t be so rare. Fortunately, in 21st Century many female musicians are finding a place- I believe the internet has helped that. I would like to see more stories about women in magazines and showing them playing their instruments. There are still too many songs by men who feel it necessary to write in misogynistic ways, and women who feel it’s necessary to play the role of objectification. And yet there is an amazing amount of women in the world creating, producing, engineering and performing.

What is the impact of music on the racial, human rights, political, spiritual and socio-cultural implications?

Music has always been a place for people to find common ground. And to also point out where things aren’t going so well. We still have so far to go, and yet music is a fantastic bridge that brings people together. Think of protest songs, sea shanty’s, certainly gospel songs that preach unity. It has and always will be part of our culture.

I’d love to go to the future where a young girl showing interest in a guitar is given permission to learn on her own terms. I’d love to see that… Go to the past and sit for a day on a porch with Elvie Thomas and Geeshie Wiley. I’d love to hear what they had to say about the times they lived in and what gave them hope and inspiration. I’d love to spend a day with Nina Simone, or a day in a recording session with Billie Holiday, I would love to see how they were treated, what advice they would give to future generations. 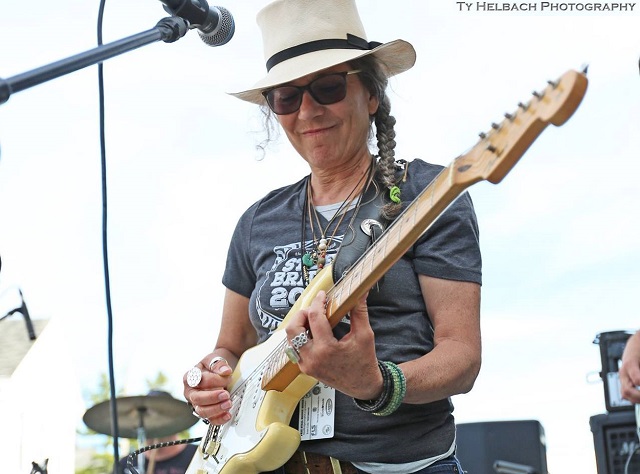